From £189,6409
New age dawns with a mid-engined supercar that has a great new engine and sensational ride and handling
Open gallery
Close

Maserati is back. Again. What?

Yes, in one of those occasional reboots, here’s a new car that heralds a new age for the storied Italian sports car manufacturer. Mind you, it’s quite something, this new dawn. Much more exciting than a BMW 5 Series-size saloon or an SUV. It’s a supercar. Coo.

It’s called the MC20 – M for Maserati, C for Corse (meaning ‘racing’, for those who don’t know any Italian) and 20 for, um, 2020. It’s a mid-engined two-seater with a carbonfibre tub, from which are hung aluminium subframes front and rear, holding double-wishbone suspension all around and with adaptive dampers and anti-roll bars.

In a cradle behind that passenger cell is a new twin-turbocharged 3.0-litre V6 engine making the good side of 600bhp and driving the rear wheels through an eight-speed dual-clutch automatic gearbox, like the one the Chevrolet Corvette C8 uses.

And that, in a nutshell, is the mechanical specification, although the back story, which I had all but forgotten before I got into the car, apparently isn’t quite so short. More on that in a moment. 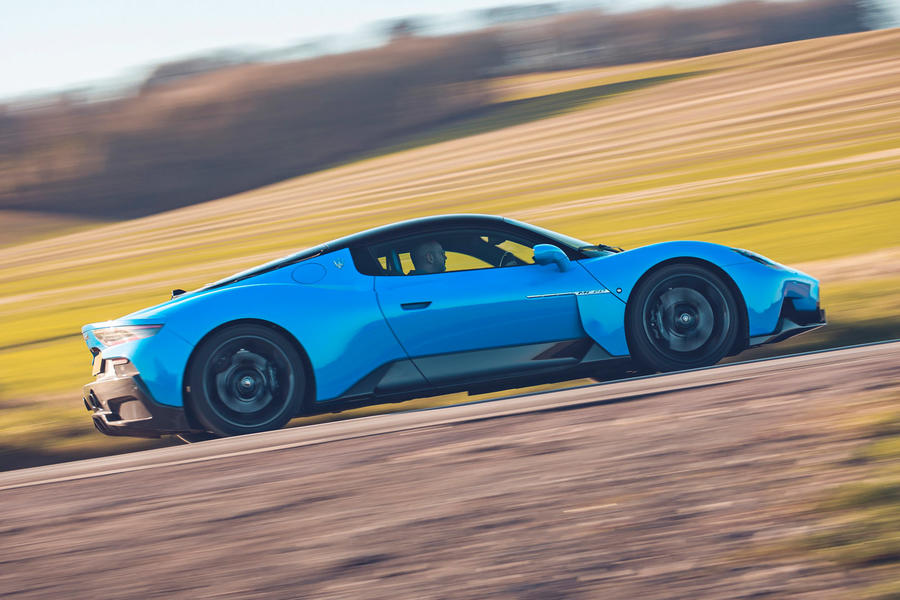 You swing open a butterfly door wide to climb in. There’s a large aperture and a small sill, so access is quite easy. The snug seats feel relatively central but the pedals in this right-hand-drive car even more so. We didn’t note that on early left-hookers, but wheel-arch ingress pushes RHD pedals across so that your left foot falls naturally on the brake pedal, your right foot on the throttle, like in a single-seater or a kart. None of the MC20’s rivals – of which there are many – quite do this, although a McLaren is closest. More on that and others later, too.

The MC20’s two-seat cabin is pleasingly finished. A nice bit of stitching, a bit of soft leather, some Alcantara, expanses of carbonfibre, badging and an Italian tricolore. Standard stuff: less flamboyant than in, say, the Ferrari F8 Tributo or a McLaren but rather tastefully done.

There’s enough room for tall occupants, the steering wheel is pretty much round, the column stalks seem to be shared with Alfa Romeo and the big gearshift paddles are attached to the steering column, not the wheel. That’s fine by me. The central rear-view mirror is digital. Not everyone’s cup of tea, but switching it off for a conventional mirror view means you can’t really see anything beyond the engine compartment at all, so you switch it back on again. Otherwise, the mirrors are well sited and the glass area is quite generous.

There’s a fully digital instrument display and a fairly small but easy-to-navigate infotainment touchscreen in the centre. On the lower console there’s a big driving-mode selector and gear selectors.

The powertrain and stability-control system will adjust their responses respectively through those modes too, but the steering weight always stays the same. Good: I like how it does that in a McLaren or Ferrari. Perhaps I will here, too. 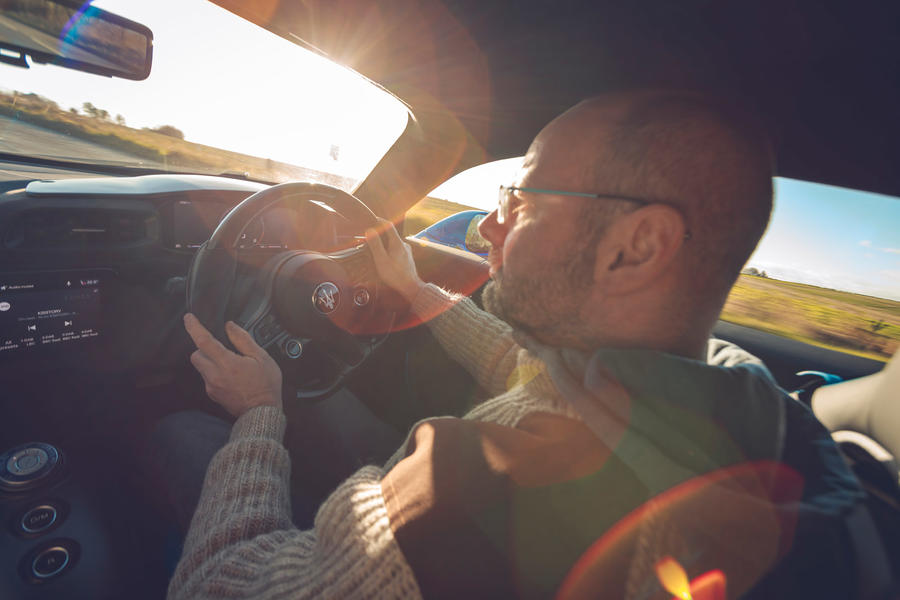 The MC20 joins a vast array of mid-engined alternatives, from the Audi R8 and the upcoming Lotus Emira through the Lamborghini Huracán, the McLaren Artura and all the way, perhaps, to Ferrari’s F8 Tributo and 296 GTB. At £190,275 before options, it straddles quite a lot of ground.

What’s telling about all of the MC20’s driving modes is the one marked GT. This feels like a car that could go distances. The engine, being turbocharged and a six, is relatively muted. It’s extremely smooth and makes its power broadly (with a little lag low down), while the gearshifts give good upshifts but occasionally hesitate doing down. It’s quick, of course – quicker than you would ever need on the road – but also long-legged and with generous gear ratios. Above 50mph, it still won’t accept the length of sixth gear. Right enough it’s a supercar powertrain, but it’s one built to rub along with easily.

A GT, then? It could be. It has a boot at the back, which gets a bit warm but is the size you would find in, say, the Corvette or the Lotus Elise, and a small cubby at the front. So the MC20 is, by mid-engined supercar standards, rather practical.

It’s also rather comfortable. I really like the way it goes down the road. In the UK, GT mode with the softer damper setting is usually fine.

Our test came in early January, so the 20in wheels were shod with 245/35 and 305/30 winter tyres, which often makes for a duller ride and almost always for less steering precision. But if the ride is nicer and steering sharper on conventional tyres, this will be ever more athletic. There are breathsto the way it moves, with never a shudder, never a thump, just a finely poised dynamism like the best of them. It’s comfortable, but also it feels ready for changes of direction. Those are hugely enjoyable too.

It turns with great engagement and enjoyment. The steering is relatively light and quick, at 2.2 turns between locks – not as fast or hyperactive as in a Ferrari and not as feelsome as in a McLaren but well measured and geared and not unlike, I would say, the Alfa Romeo Giulia GTA’s. Which is absolutely no bad thing.

Which returns me to that long back story. Word had it that the MC20 was going to be an Alfa Romeo, and whether that’s true or not, it’s the latest iteration of Alfa Romeo sports saloon, the Giulia GTA, to which it dawned on me that the MC20 feels most closely related dynamically. Normally there would be scope for disappointment at a mid-engined supercar feeling most like a saloon, but remember how special the Giulia GTA is. This feels a little like that but unburdened: keener and lower, with its masses precisely where you would want them and fewer of them. 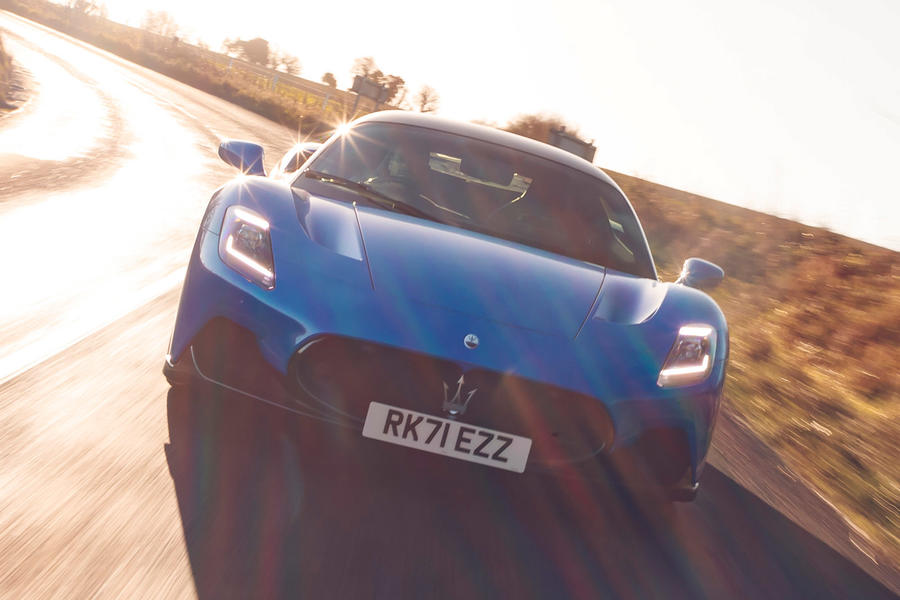 Our drive was restricted to the road, and in a January chill on winter tyres, you only learn so much, but I thought it was downright fantastic. One of the most dynamically capable cars I’ve driven in recent times.

It’s not short of competition, mind. Perhaps inevitably, it’s less dramatic than some of those; it doesn’t have the V10 of the Huracán or even the shouty V8 ‘meh’ of an old McLaren. It’s rather a lot more expensive than the R8 or the Corvette, too.

But still, I think there’s something about this car. Whether it was always meant to have the Maserati badge or whether it came to it during its development, as Maserati reinventions go, this is the best I remember. I loved every bit of it. 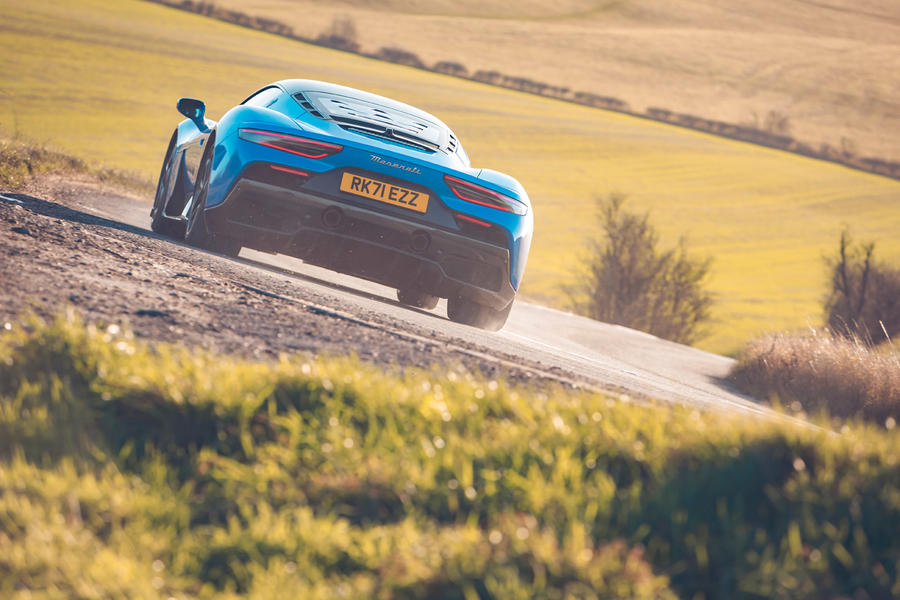 I think it's the dog's dangly bits!!

To start with it is NOT a Ferrari/Lambo-Audi/Porsche/McLaren and has a much older heritage than all of them.  The nits can pick at details that offend as much as they like but it is the way that it goes and handles which really counts and the report greatly likes those. It is very nearly worth committing a crime to get the money to pay for one!