From £51,5509
Share review
This lighter, sharper 410 Sport successor may have a greater track focus, but it's still just as fun on the road
Share
Open gallery
Close

Both a racier version of and a replacement for the 410 Sport, the Evora GT410 Sport wins its ‘GT’ prefix mainly by way of weight savings, added aero and more focused running gear, taking cues from the range-topping GT430.

Carbonfibre parts including the roof and gratifying one-piece louvred tailgate help to trim weight and complement the redesigned composite front and rear panels. But to achieve the maximum 28kg saving over the 410 Sport, you’ll need to spec the 20-click, two-way adjustable aluminium Öhlins dampers and titanium exhaust at £5500 apiece.

What you do get as standard for £85,900 (about four grand more than the outgoing 410 Sport) is up to 96kg of downforce at the car’s unchanged 190mph maximum speed, sports springs (Eibach) and dampers (Bilstein), and features pinched from the GT430 including Michelin Pilot Sport Cup 2 tyres, AP Racing four-piston calipers and an improved version of the Evora’s familiar six-speed manual gearbox.

Superfluous as the prospect might seem, you can still choose a six-speed torque converter for £2000 more, but while it’s 0.1sec quicker to 60mph at 3.9sec, top clip drops to 171mph, weight and emissions go up and it misses out on the manual’s Torsen limited-slip differential. 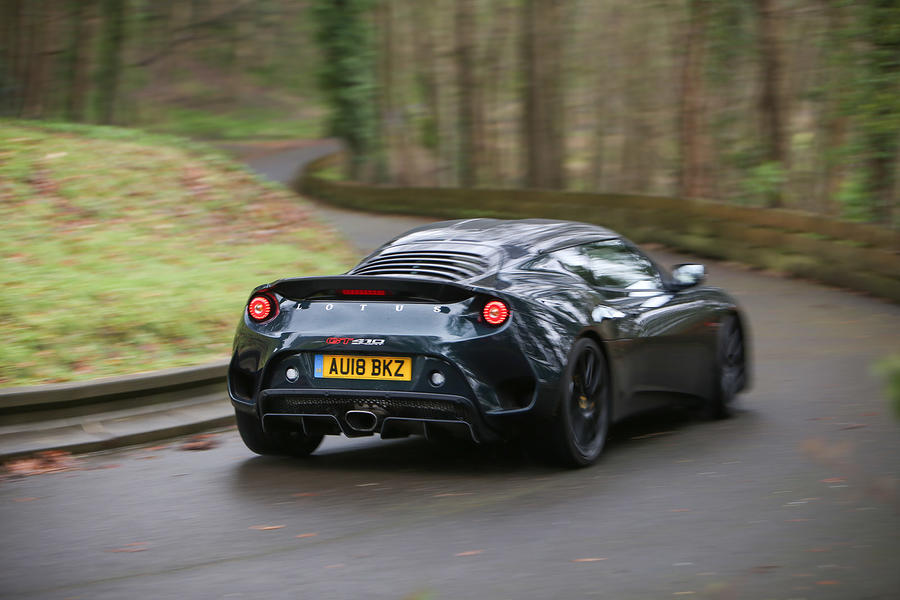 Don’t let the track-day spec fool you – this is still a Lotus that blossoms in the wild. Tackle a rough, corkscrewing backroad and Hethel’s trademark fluidity remains intact, with our test car’s £2000 ultra-lightweight wheels being relentlessly forced towards the Tarmac. By turns, this lets you exploit the hydraulic steering, which is just sharp enough, ideally weighted and communicative without being busy, the feelsome and reliable brakes and, of course, the 3.5-litre Toyota-derived V6 with Edelbrock supercharger and chargecooler.

With the bi-modal exhaust dialled up, tailpipe noise dominates, but it’s an authentically raucous soundtrack that thrills without artificial augmentation or contrived pops on the overrun. The engine pulls happily from 1500rpm but thrives from 3750rpm to the 7000rpm redline, with a throttle response to embarrass even the most alert of modern turbochargers. The gearbox’s two-step action still lingers, but it’s now a very minor flaw; the tactile aluminium gearknob, short, robust-feeling throw and heel-and-toe-friendly pedal layout are enough to make pleasant work of shifting.

On a dry road – even at near-freezing temperatures – the Cup 2s grip endlessly, allowing confident and committed progress. An on-track stint at Hethel confirmed the loftiness of those limits, with only a concerted combination of aggression and weight transfer unsticking the rear end. But if standing water and countryside muck are more likely to pass beneath your wheels than stripy kerbs, the no-cost touring pack with Michelin Pilot Sport 4S tyres and slightly gentler Bilsteins might suit better.

That’s not to say the ride is harsh; it isn’t. It is firm, but even sharp bumps don’t resonate through the bonded aluminium tub. There’s almost a temptation to seek out divots to prove how little they upset the car, although this trick isn’t quite as magical as in those early, innocent days when you could buy an Evora whose power output started with a two.

As for more mundane journeys, there’s a bit of jostle in town and a little vertical bobbing on the motorway, but both are tolerable. In fact, the Evora GT410 Sport makes a decent cruiser; the exhaust hushes up at low revs in its quieter mode, the steering is settled and – at least with £250 of optional sound insulation fitted – road and wind noise are perfectly manageable.

It's the same cost for 2+2 or 2+0 seating layouts; the latter’s rear shelf proved useful for supplementing the weight-restricted, 160-litre boot space.

The optional £3500 Sparco seats could use a bit more backrest padding, and the absence of armrests to lean on unfailingly caught us out when settling in, but the driving position is both sensible and secure. Copious stitched Alcantara, touches of leather and switchgear that’s now more good than bad add a feeling of interior quality missing from early Evoras. 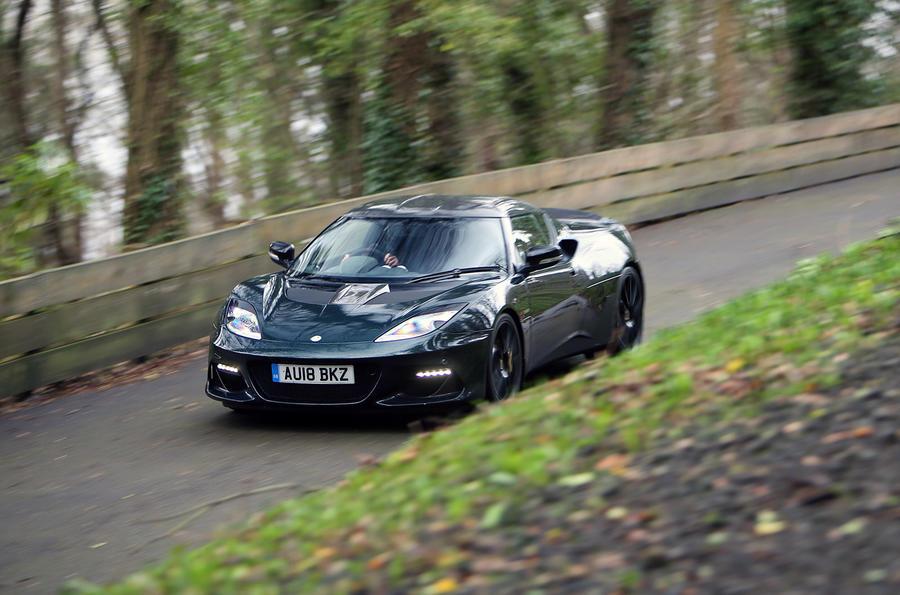 You can buy the similarly stripped-back Porsche 911 Carrera T for almost exactly the same money as the Evora GT410 Sport. The latter is both quicker and lighter; that it misses out on the 911’s adaptive damping isn’t a great concern given its versatile passive set-up.

Whether you welcome the attention you’ll attract from the Evora’s aggressive, duct-riddled bodywork is subjective, but other day-to-day concerns are not; the switchgear still needs work, even the £2000 ‘premium’ infotainment unit is an aftermarket job that lacks integration with other systems and the electronic displays remain quite basic.

These issues are likely to be tackled as Geely’s parts bins open up over the next few years. In the meantime, they are gripes more than show-stoppers, for the Evora GT410 Sport is still a brilliant thing; it’s as much fun on a backroad as it is on the track, and surprisingly rounded elsewhere. That’s a deeply appealing combination. 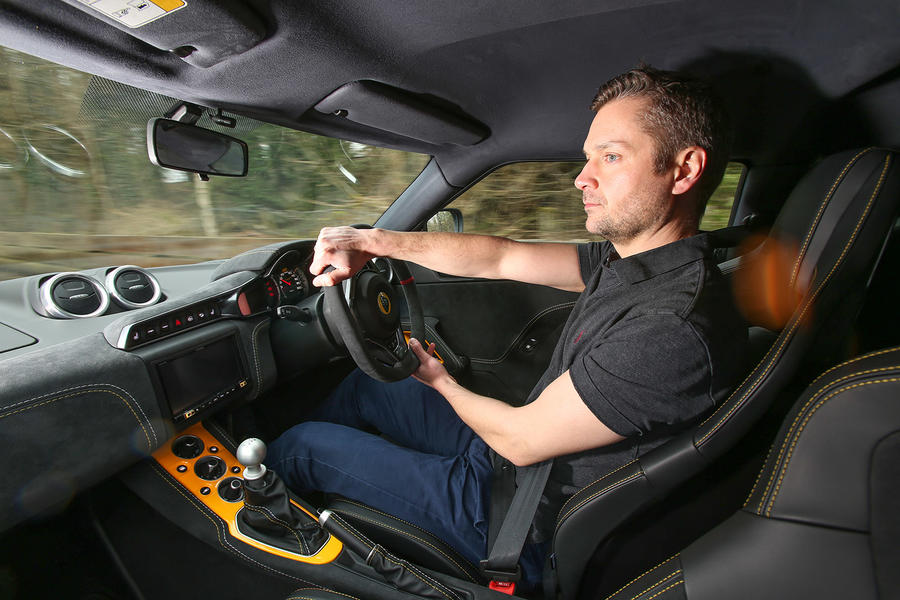 But no doubt there'll be an even faster lighter one next week, so best wait a bit. This endless succession of limited edition Lotuses would put me off as a buyer and surely can't do much for these cars' early depreciation. Surely it would be better to bring forward some actual proper new models instead of this series of tart ups?

But no doubt there'll be an even faster lighter one next week, so best wait a bit. This endless succession of limited edition Lotuses would put me off as a buyer and surely can't do much for these cars' early depreciation. Surely it would be better to bring forward some actual proper new models instead of this series of tart ups?

After all the 911 is an all new car and Porsche never do many variations of those - do they ?