Cast your mind back to 2008. It was the year the global banking system broke, that Instagram first slipped into existence and that Lotus launched an all-new model called the Evora.

Back then a mere eight-year lifespan was planned for this 280bhp 2+2 GT, but 12 years later the economy is once again on its knees, Instagram has grown to serve one billion users worldwide and, amazingly, the Evora is still with us.

To put this timescale in some context, since this magazine first drove the Evora, Lotus has gone on to develop operational hybrid prototypes, return to Formula 1, win in Formula 1 for the first since 1987, threaten a dangerously overambitious former boss with high court action, depart from Formula 1, plan an all-new Esprit, make an annual loss of £36 million, fall under the ownership of Chinese giant Geely, receive a cash injection of several billion pounds and launch an electric hypercar with 1973bhp, that costs £2.04 million and goes by the mercurial-sounding name ‘Evija’.

It goes almost without saying that Lotus has also given us some truly barnstorming road cars during that time – not least the Evora itself, which won Autocar’s annual Handling Day contest at the first go in 2009 and has evolved since – but you’d be forgiven for forgetting all about those, such is the degree of strategic turbulence this tiny car company has endured.

The big news now is that Lotus is pivoting to become an electric-leaning brand, starting with an all-new hybrid-V6 Esprit expected to break cover next year. Not that anyone has told the Evora, of course.

In GT410 form, it continues to use a supercharged Toyota 3.5-litre V6 (you can guess the power output) and pairs this with a six-speed manual gearbox. Unlike the Exige and Elise, Lotus’s most refined model also uses power steering, but the set-up is hydraulic rather than electromechanical and the application is light. Uniquely in the Lotus line-up, the Evora then benefits from having a mechanical limited-slip differential between its rear wheels.

At 1361kg, the car also remains extremely light for something with back seats and plenty of ‘luxuries’, which are ultimately what separates the GT410 from the existing GT410 Sport. A softer suspension tune has been imported from US-market Evoras to give the car even greater everyday appeal, and the cabin mirrors this. DAB is available for the first time on any Lotus, the slightly perched but deep Sparco buckets are heated, there’s air conditioning as standard and a reversing camera, plus extra sound insulation and, yes, there are now armrests in the door cards.

An optional Sports Pack adds stiffer suspension, forged wheels from the GT430 road racer and Michelin Pilot Sport Cup 2 tyres, but all this rather defeats the point. 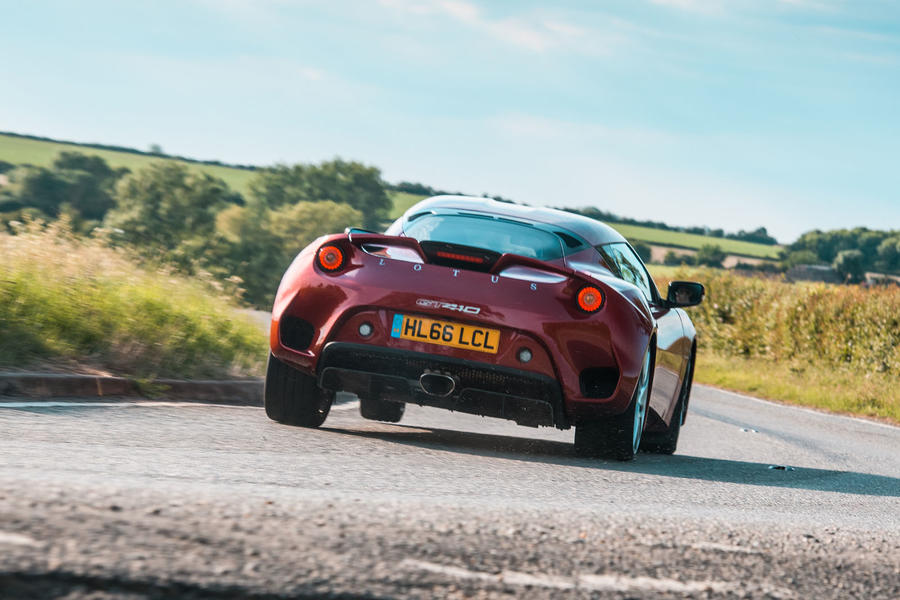 Inside it's intimate, the wrap-around glasshouse contriving to make the Evora feel like some modernday Lancia Stratos. Along with the sight of cam covers for the  in the rear-view mirror, there’s no shortage of theatre.

These specification changes also quite obviously achieve Lotus’s aim of making the Evora even easier to get along with. The same foibles that have always existed are still here – old Ford switchgear, the conspicuously aftermarket infotainment display, some dubious, low-volume plastics and all but unusable rear seats – but the ability of the chassis to casually absorb in controlled, graceful fashion anything short of ancient cobblestone roads is outstanding now more than ever.

It’s intimate inside,
the wrap-around
glasshouse contriving
to make the Evora feel
like some modern-
day Lancia Stratos.
Along with the sight
of cam covers in the
rear-view mirror,
there’s nse fwosetage
of theatre.

For a mid-engined car of such finely honed responses, the GT410 also laps up motorway miles with a plushness at odds with the short wheelbase, and it will manage 35mpg at a sustained cruise. As for road noise, the Evora is country and western to the Porsche 718 Cayman’s stadium rock.

Best of all, it seems to give away nothing in terms of driver appeal. No rival possesses such communicative steering, and while the GT410’s handling is almost supernaturally neutral and subordinate to immense grip and traction levels, the sense of precision and balance, and of agility without nervousness, allows you to delve into the driving experience and push as hard as you please. I'm not sure any other car is quite to perfectly balanced.

It means Evora always seems to have reserves of composure, and ultimately all the little luxuries GT410-spec brings are only the equivalent of putting a fluffy collar on a greyhound. Underneath the leather upholstery, the GT410 is still just about as lean and direct as dedicated road cars come, and has still got it even at 12 years of age. 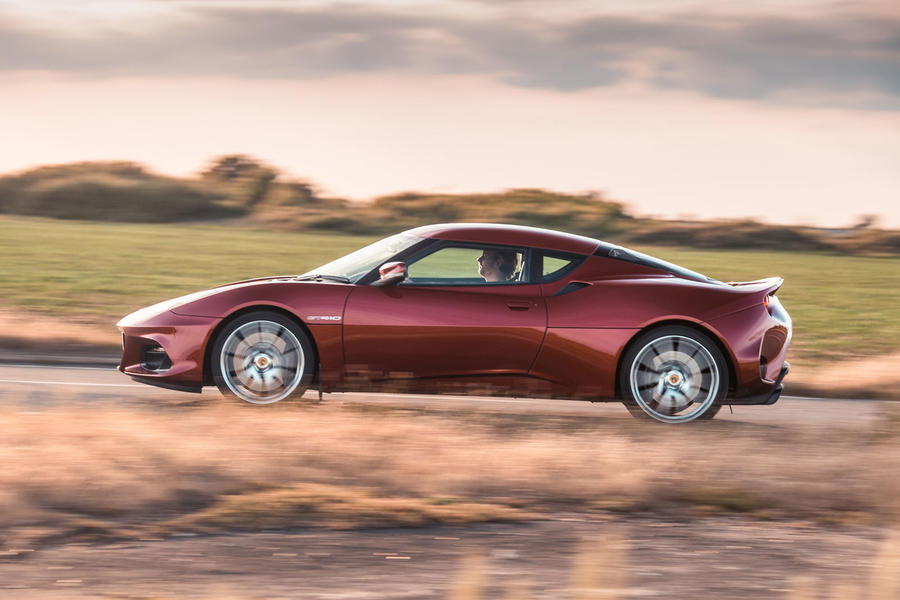 The kicker? The GT410 is priced directly in line with the Porsche 911 and at almost twice the cost of an entry-level Alpine A110.

Most will therefore spend their money on younger, fresher-feeling cars and understandably so. As ever with the Evora, only the purists need apply. 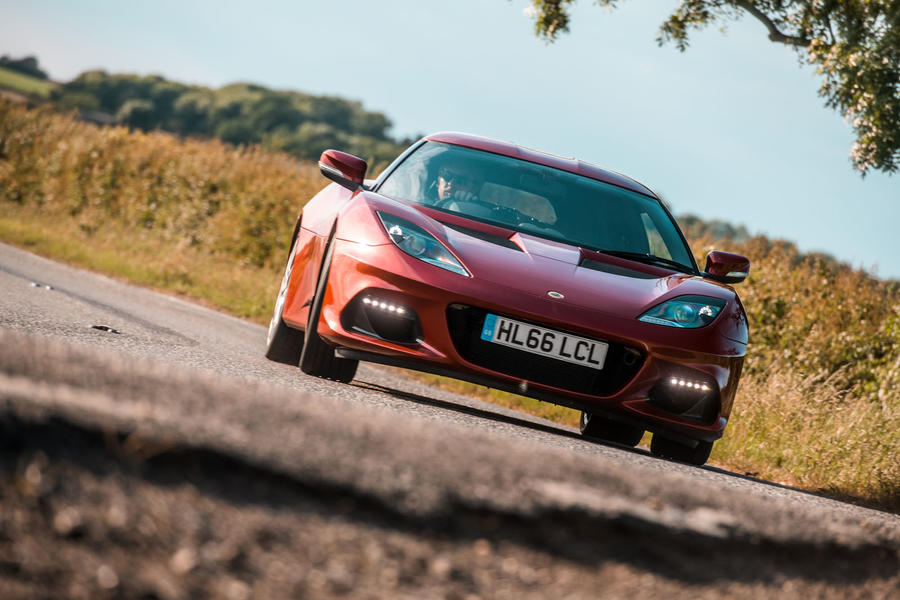 I love the idea of this sort

I love the idea of this sort of car, a sporting GT that can do long distance comfort but also entertain when the time comes. The fact that it has a manual gearbox is a massive plus for me and I'm not too fussed about shonky infotainment or plastics quality; the problem for Lotus is that I'm not representative of most buyers.
275not599 25 June 2020

The Tesla Roadster will

The Tesla Roadster will indeed wipe the floor with the Evora when it comes to acceleration. However, I wouldn't bet against the Lotus when it comes to quality of construction. Tesla's have paint, panel fit, rattles etc worthy of BL. No I haven't driven one, I just look at road tests, forums and YouTube. I admire what they have achieved in 8 years but they really have to start focusing on quality rather than quantity.

Why is the torque so puny?