From £37,1456
Lexus's four-seat coupé gets a mid-life revamp, but is it still a left-field alternative to recommend?
Open gallery
Close

The relaunch of Lexus’s striking four-seat coupé, sporting a mid-life revamp three years after its launch.

It’s a niche model, this - coupés make up around 7% of the (admittedly large) premium sector, but the German ‘big three’ have more than 80% of that sewn up. BMW sold around 3900 4 Series in November last year across Europe, when Lexus shifted just 77 Lexus RCs. It’s a minnow in an already relatively small pond.

Nevertheless, it’s got exclusivity on its side, and is a unique prospect in this sector as nobody else offers a hybrid-powered four-seat coupé. Lexus tried to go mainstream with the turbocharged, non-hybrid Lexus RC200t, but that has since been dropped due to lack of interest, leaving just one powertrain and three newly rearranged trim levels. 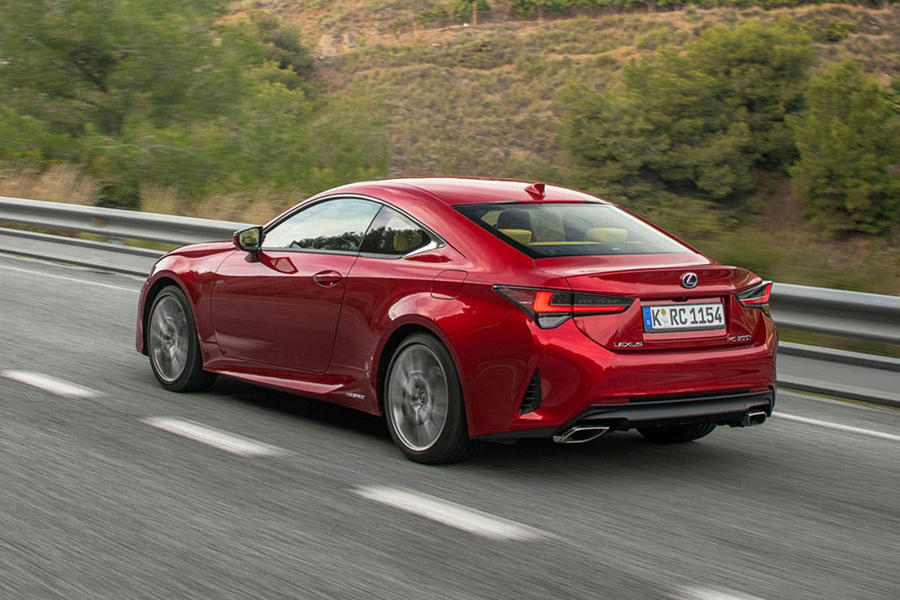 If you were hoping for a revelation, you’ll likely be disappointed. This is an update to be filed under ‘minor and largely inconsequential’.

Styling updates for the RC for 2019 are largely restricted to a pair of intricate new LED headlights, reshaped tail-lights and a pair of resculptured bumpers. That’s not accounting for some small aerodynamic tweaks, modestly improving an already attractive design bolstered by a range of pleasingly bright colour choices.

The interior is similarly spot-the-difference. A smattering of posher materials adds to what was already (save for a few cheap details) a solid, plushly trimmed cockpit, while tech upgrades include a more comprehensive suite of driver assist systems and optional luxuries like a 17-speaker Mark Levinson sound system.

Sumptuous yet decently supportive seats and a great stereo don’t make up for the foibles that remain, like a touchpad-operated infotainment system that’s so fiddly it should surely be illegal to operate on the move, and a cramped, claustrophobic rear cabin.

Elsewhere, there are chassis upgrades such as new shock absorbers and retuned steering. Neither seems to have done an awful lot to alter the RC’s dynamics: if you concentrate really hard, the low-speed ride has improved, but this is still not a coupé that relishes being driven quickly, with steering that (oddly) feels lazier than the front-driven ES, a relative shortfall of front-end grip and a lack of agility due to its substantial mass - the RC is heavier than the ES and carries a great deal more flab than almost every rival.

It's more within its comfort level when the pace is dropped, allowing you to enjoy low noise levels and a nicely resolved ride. Which is fine in essence - not everybody wants to drive everywhere with tyres begging for mercy - but a disappointment when rivals from BMW and Audi are within scratching distance in terms of comfort but notably more incisive when the going gets twisty.

The petrol-electric powertrain (identical in capacity to that of the ES but the older, third-generation variant) is unchanged, and remains completely at odds with the sporting premise Lexus’s marketing materials shout about.

It excels around town, being far quieter and smoother than an equivalent diesel, and is well-mannered at a cruise. But it felt wholly out of its depth on the twisting Spanish roads Lexus launched the car on, needing to be worked hard to make any sort of progress and complaining vocally when asked to do so as the CVT gearbox sends revs soaring uncomfortably high. 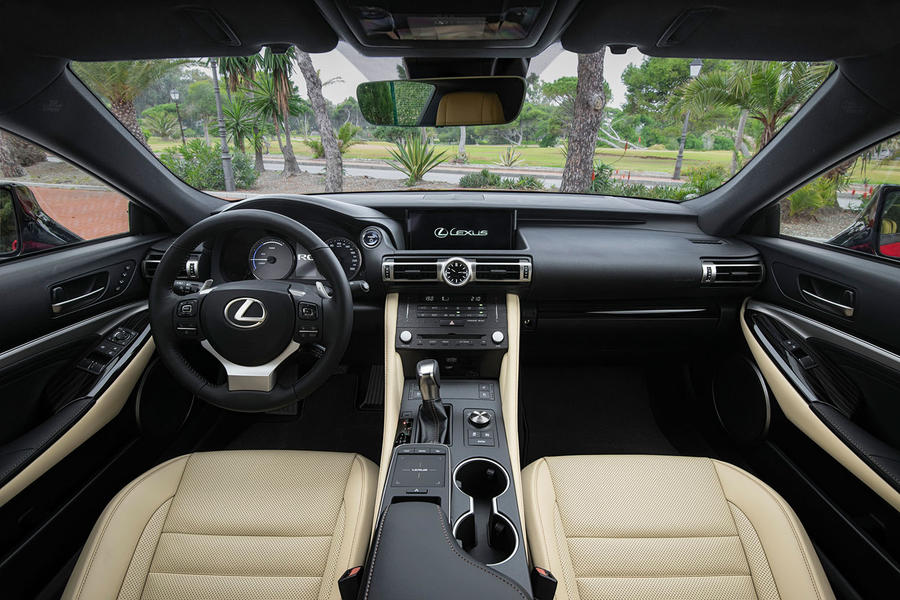 We can still make allowances for the Lexus’s lack of a dynamic edge and a powertrain that seems to actively dislike being driven enthusiastically. Think of the RC as a style-led, comfortable coupé with an economy focus (45mpg really is within easy reach) and it does have its place in the market.

The RC also excels for business users, where its favourable benefit-in-kind rate offers significant tax savings over a normal petrol or diesel model. But private buyers are going to have to pay through the nose for the privilege. The RC’s base price is a whisker over £38,000, which is a good few thousand more than the Germans start at.

Granted, you get more standard equipment in an entry-level RC, but the £46,000 Lexus asks our range-topping Takumi model starts to look like weak value when you consider the performance offered by rivals at that price point. 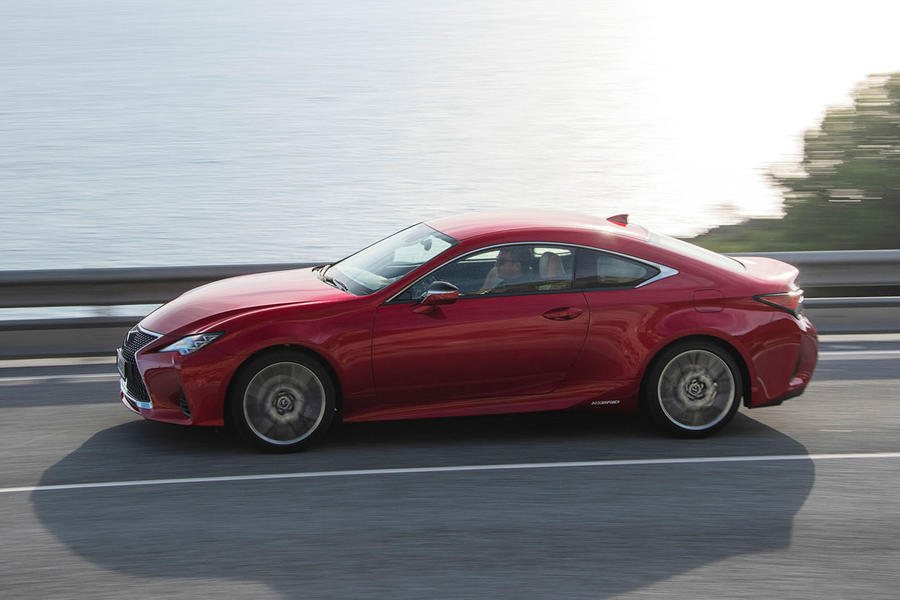 I feel Lexus are sadly

I feel Lexus are sadly squandering their advantages. Everyone knows they are reliable, the world has realised that diesel is evil, yet sales still dont pick up. In markets they do well in, most of their sales are non hybrids. But here in Europe where CO2 is SO inportant to many buyers because of tax, you would think a hybrid would give them a great place to start.

I dont know why they dont follow the Germans route to hybrids, and add an electric motor to an existing TC auto, and at least preserve the driving experience. They must have accepted that people dont like CVTs as they fit false gear steps, or in the case of te LS/LC attach the CVT to a 4 speed TC box. However, it doesnt work. They dont feel like a normal powertrain, and unless you drive with modest inputs, dont live near hills, never want to pass something quickly, the engine will make a lot of noise, without the driver being able to control it.

It wont be many years, and hybrids will have all become plug ins, and eventually just EVs, and maybe at that stage a truely silent Lexus will emerge to be a peaceful, comfortable, and exceptionally well made car. I just feel they have it within their grasp to make something much more appealing in the meantime, afterall the RC here looks great, is wonderful inside, and superbly built.