From £95,72510
More power and an intoxicating soundtrack have breathed new life into our love affair with the biggest, baddest Range Rover Sport variant
Open gallery
Close

Well, the Range Rover Sport SVR certainly isn’t an exercise in restraint, that’s for sure. When this, the biggest, baddest Range Rover Sport money can buy, rocked up on the scene back in 2014, it did so with all of the subtlety of a severely hung-over grizzly bear.

Created by the in-house skunkworks that is Jaguar Land Rover’s Special Vehicle Operations division, the SVR was equipped with an apocalyptic supercharged V8 engine, a stance that looked steroid-enhanced and a Nürburgring lap record to boot. It was rabid and exciting and gave off the impression that it would punch you in the face just for looking at it the wrong way. In short, we loved it, and subsequently awarded it the full five-star rating when it was put under the microscope that is the Autocar road test.

Now, it’s been ever-so-slightly refreshed for 2018, and the good news is that it’s even more of a sporting SUV brute than when it was launched four years ago. The headline change here is that the 5.0-litre supercharged V8 - a powerplant that never felt particularly lacking in the performance department - now produces 567bhp at 6000rpm, and 516lb ft from 3500rpm – improvements of 24bhp and 14lb ft respectively.

The chassis has been fettled, too, with Land Rover engineers tweaking the SVR’s active dampers to improve turn-in and grip and better contain body roll. That's no small task when you consider the fact that the SVR tips the scales at 2310kg. A body-coloured carbonfibre bonnet has also been introduced as standard, marginally reducing weight over the front axle. For a not-so-modest £6225, you can opt to leave the carbonfibre exposed, while also adding further carbonfibre panelling around the body. Our test car came equipped as such, and we’ll leave it up to you to decide whether that look is a tasteful one or not. The cabin, meanwhile, gains the latest dual-screen infotainment system first introduced on the smaller Range Rover Velar. 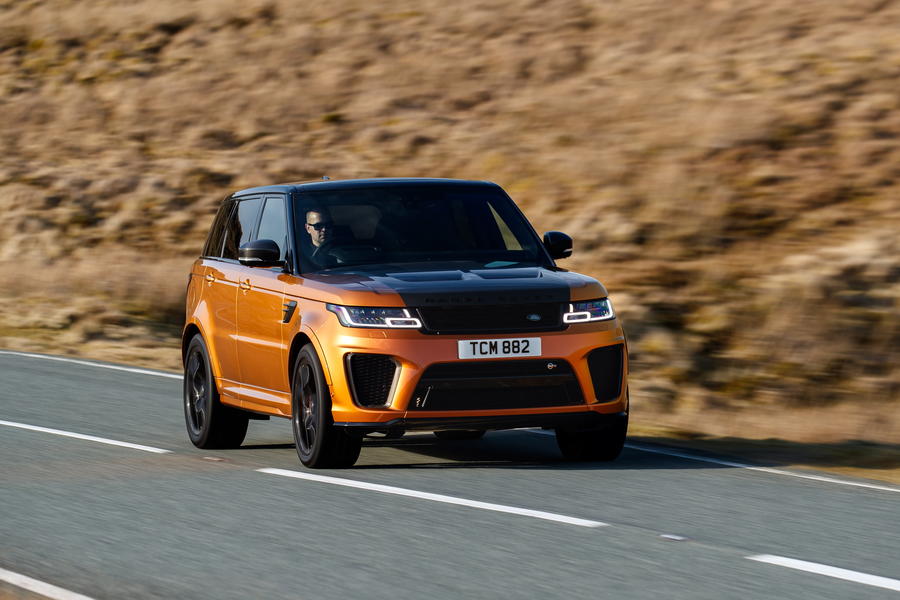 For all of the gawdy exterior details - the black 22in alloys, bright orange paint and lashings of carbonfibre - and performance-orientated underpinnings, the SVR is actually a hugely comfortable and refined beast to drive. Even with the firmer suspension, it rides in the manner you expect a Range Rover should, ironing out ruts and bumps in the road. You sit high up in the firm, but largely supportive, sports seats, with a commanding view of the road and no shortage of interior space. The cabin is plush and luxurious, and every bit as high end as you would expect from a car costing almost £100,000. It’s all very calm, very relaxing and very Range Rover.

Well, that is until you give the throttle pedal a good old prod with your right foot. Doing so is like stepping on a landmine. First, there’s the acceleration, which is staggering. There’s a perverse sense of joy to be gained from sitting in a 2.3-tonne SUV as it accelerates from a standstill to 60mph in 4.3 seconds. Something this big just shouldn’t be able to pick up speed at such an alarming rate.

Then there’s the soundtrack, which dominates the SVR’s driving experience. It starts off as a deep, bassy growl before developing into an unhinged, savage roar as the tachometer needle approaches the 6500rpm redline. It’s intoxicating, antisocial and thoroughly brilliant, and is only made better by the fact that when you lift off, the excess fuel exploding in the exhaust system makes for an overrun that sounds like a dozen muskets being fired in quick succession. It’s excellent stuff.

As impressive is the way in which the SVR can be hustled down a particularly challenging stretch of country road. It’s never going to be as nimble or adjustable as a hot hatchback, but considering its size, it stops, corners and grips tenaciously. Body roll is well contained, and the steering, while not exactly bristling with feel, is healthily weighted and reasonably quick in its gearing. And while you may not be able to maintain quite the same levels of speed through the bends as you would in a smaller, lower sports car, you always have that atomic bomb of an engine to rely on when you exit.

Oh and before we forget, the SVR features Land Rover’s Terrain Response 2 system and four-wheel drive, which means it can still go where the vast majority of performance SUVs can’t. Even the frozen, muddy, rutted tracks of a Cotswold wood weren’t enough to bog down the SVR, even when it was equipped with summer tyres. 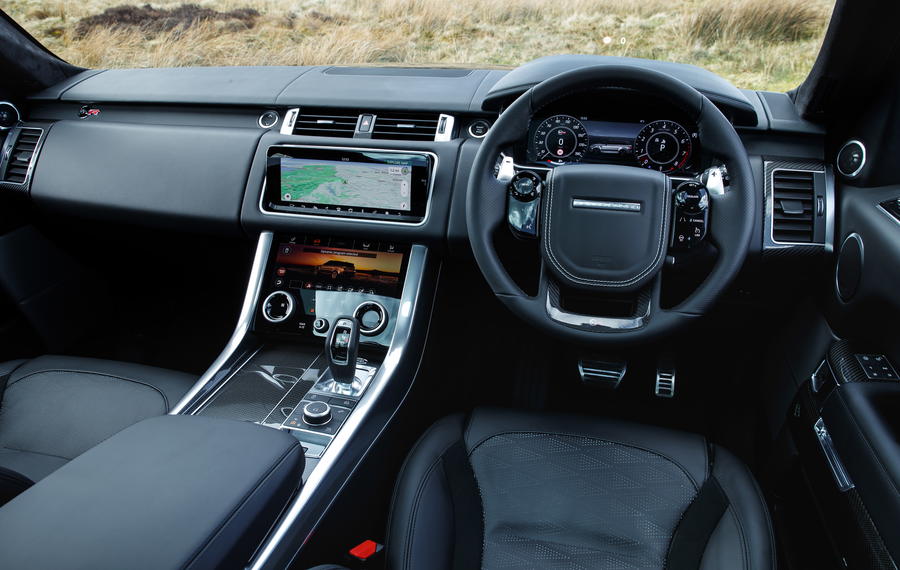 Let’s be honest, the Range Rover Sport SVR is not a car that has been designed with sensible, rational people in mind. At £99,680 it’s expensive, and with a claimed combined economy figure of just 22.1mpg (which you’d be lucky to achieve in the real world) it drinks fuel with reckless abandon. It emits 294g/km of CO2, so it’ll also cost a small fortune in vehicle excise duty (VED).

But a car such as this is never going to be one you buy with your head. Instead, it has been designed to appeal to the heart, to that inner child who’ll never tire of the explosive performance, or raucous soundtrack.

It’s a very special car, and if you can stomach the steep asking price and the ridiculous fuel bills, chances are you won’t regretting forking out for the SVR. If money were no object, this tester would have one in a heartbeat. 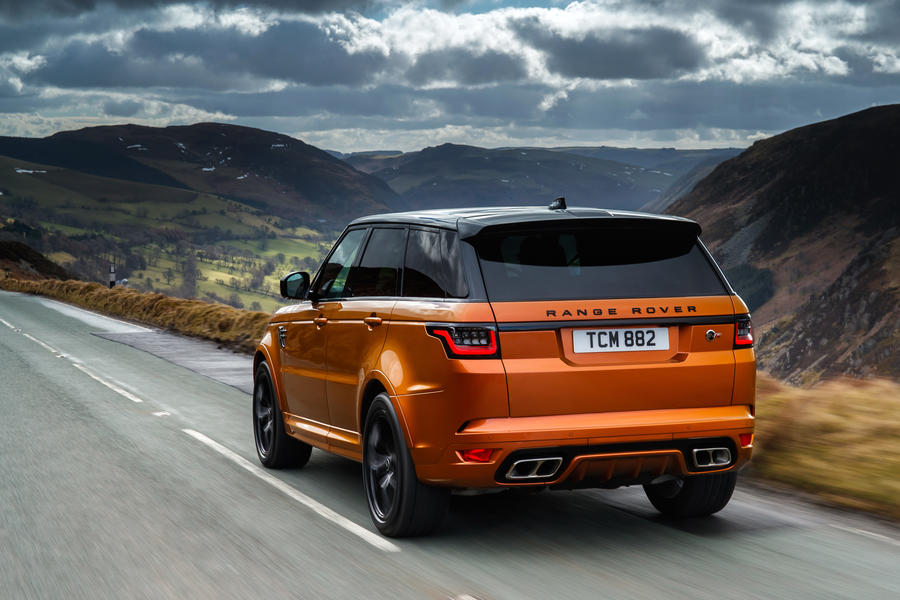 The review is very exciting.Cant wait for drive.I really want to have it.Thank you

Paul Calf said it perfectly...sums it up here too

Interesting, when the Leaf test damned with faint praise a 40hp increase.