BACK TO ALL NEWS
Currently reading: 2015 Range Rover Sport SVR – new pictures and passenger ride
UP NEXT
The next Hamilton? Autocar meets F1 prodigy George Russell

The most powerful Land Rover ever made will go on sale for £93,450 in February, and we've been out for a ride in it
Share
Open gallery
Close
Share story

The new Range Rover Sport SVR, the fastest and most powerful Land Rover in the company’s history, is set to go on sale in February 2015.

The £93,450 model draws power from a 542bhp supercharged 5.0-litre V8, which helps to propel the SVR from 0-60mph in just 4.5sec and reach a top speed limited to 162mph. This, and tweaks to the suspension and gearbox, has helped the SVR to set a new lap record for SUVs at the Nürburgring, with a lap of 8min 14sec.

The SVR is the work of Jaguar Land Rover’s Special Operations unit, which is headed by former Land Rover boss John Edwards.

It is the latest in an increasing number of SUVs with supercar-baiting levels of power and performance, its rivals including the likes of the Porsche Cayenne Turbo S, Mercedes-Benz ML63 AMG and the BMW X5 and X6 M.

The SVR’s supercharged V8 engine is also found in some of Jaguar’s most potent models, including the F-type R coupé and XFR-S saloon.

The 5000cc all-aluminium unit produces 502lb ft of torque. Despite the power and torque increases over its 503bhp application in the Range Rover Sport Supercharged, economy and CO2 emissions remain unchanged at 22.1mpg and 299g/km respectively over the less powerful model.

Drive is sent to all four wheels through a revised ZF-supplied eight-speed automatic transmission, which can be controlled by steering wheel-mounted paddle shifters or the gear selector.

The torque converter is tuned for 50 per cent quicker shifts, which Land Rover claims are “shorter, more visceral and audibly crisper” than in the gearbox’s standard application. Gearbox functions include the blipping of the throttle in high-speed downshifts.

Off-road ability is maintained by having permanent four-wheel drive, a two-speed transfer case and an electronically controlled multi-plate clutch in the centre differential.

On-road performance is boosted by a recalibration of the Dynamic Active Rear Locking Differential, which sends torque to the rear wheel with the most traction.

A torque-vectoring differential is imitated by a Torque Vectoring by Braking function, while the Dynamic Stability Control system has been retuned.

The SVR uses a two-stage active exhaust with electronically controlled valves, creating a “racecar-like soundtrack”, according to Land Rover.

The valves in two of the four pipes are closed at low revs and loads, but they open under increased loads and engine speeds of around 3000rpm. A crackle has also been tuned on overrun. The exhaust still works with the Range Rover Sport’s 850mm wading depth.

The chassis has been tuned for improved agility, the SVR featuring air suspension, adaptive dampers and stiffer, lighter components.

Key to the SVR’s cornering ability is an Active Roll Control system, which replaces anti-roll bars with a hydraulic pump on each axle to control body roll and allow the car to “deliver a progressive breakaway on the limit”. Weight has also been added to the variable-ratio electric steering system.

The SVR is easily distinguished from other Range Rover Sports by a series of design changes. There’s a new front bumper with larger air intakes, a new grille finish, flared wheel arches, a new rear bumper with integrated diffuser and quad exhaust pipes, and a rear spoiler. 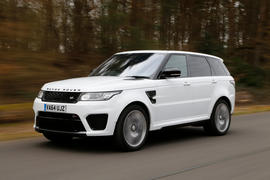 The car was first shown off at the Goodwood Festival of Speed in 2014, where it made several runs up the famous hill climb. At that point it was a heavily camouflaged development car, but still boasted the same engine of the car that is to go on sale. It was also shown as a static display at the 2014 Pebble Beach weekend in 2014.

As a concept, the fastest SUV to lap the Nürburgring is a concerning one. Surely turning a car the size of the Range Rover Sport into a lap record holder is going to have some sort of an adverse effect on everything that makes the Sport so good?

The car that we clambered into was certainly compromised in some way: this was the very one that set the record at the 'Ring, so it was kitted out with a rollcage and bucket seats.

Despite the boost in power and speed, the cars going out to customers will not come with such things. Instead, Range Rover promises that everything that makes its cars' interiors great will be retained. Almost everything, that is, as the SVR will not come with a seven-seat option, as the standard Sport does.

In fact, the SVR will come with two separate seats in the back. A third adult will be able to squeeze in the middle, but apparently you won't want to be there for anything longer than a quick trip back from the pub at night.

This is all part of a weight loss process that means the SVR is about 30-40kg lighter than the standard car.

This helps to improve the SVR's performance, but the thing that really transforms this car is that engine. It is based on the standard 5.0-litre Supercharged, but the improvements mean that it is 0.6sec quicker in the 0-62mph dash.

We were chatting happily to Dave Warner, project engineer for JLR's SVO department, as he was getting ready to demonstrate the SVR's acceleration, but whatever sentence we were in the middle of never got finished.

The kick in the small of your back is breathtaking for a car of this size, and the exhaust note that accompanied it is addictive, with a succession of pops and crackles making their way into the Range Rover's well insulated cabin.

Any fears there might have been about the ride were at least eased by our trip around the pockmarked roads around Eastnor. It is noticeably firmer than a standard Range Rover, but it stops short of the rock-hard sports car set-up that it could have gone with. Despite this, it still feels composed around corners, with less body roll than a car this size should have.

This is all the more surprising when you consider that the SVR has exactly the same ride height, ground clearance and off-road systems that the standard car does. The only difference is that the front approach angle is three degrees less, thanks to a redesigned front bumper, but it is still a class-leading 30 degrees, so it's highly unlikely you'll notice.

In fact, the most surprising thing about the SVR's off-road ability is that it is not surprising; it is just as capable as any other Sport, despite that prodigious on-road pace.

Beaten before it's release

I smell a rat

So they've managed to generate an extra 39bhp, but the combined figure remains unchanged at precisely 22.1mpg, and emmisions at exactly 299g/km....? Yeah righto. If you think the acceleration is breathtaking, just wait until you floor it and look down to see the fuel gauge moving. You'd be lucky to see 15mpg round the town. Good job Brent crude is cheap at the minute.
Cobnapint 18 December 2014

I smell a rat

So they've managed to generate an extra 39bhp, but the combined figure remains unchanged at precisely 22.1mpg, and emmisions at exactly 299g/km....? Yeah righto. If you think the acceleration is breathtaking, just wait until you floor it and look down to see the fuel gauge moving. You'd be lucky to see 15mpg round the town. Good job Brent crude is cheap at the minute.
View all comments (28)