You have to hand it to Kia. Operating from a separate building to the enthusiast radar not long ago, it recently put a competitive sports saloon into production and now threatens to break ground in more progressive fashion.

And how. While the rear-driven halo atop the Stinger GT-S still glows brightly here at Autocar, in a broader context there can be no doubt almost 300 miles of WLTP-certified electric range and an asking price close to £30,000 is more momentous.

That is what the new e-Niro crossover offers. Granted, it does not redefine the EV proposition in any singularly remarkable way. Sister brand Hyundai recently launched a version of the Kona with the same powertrain and for a similar price. The Tesla Model S is still a benchmark for range and will do 334 miles even in entry-level ‘75D’ form, while the excellent Nissan Leaf asks less of your finances than the newcomer.

But the Kona has a substantially smaller boot than the Kia, limiting its appeal as a practical family crossover. Similarly, you will pay £70,000 to join the Tesla troop and even in its second generation the Leaf requires cable action after just 168 miles. In light of this, the e-Niro is surely the Goldilocks option.

Built in right-hand drive and to generous ‘First Edition’ specification (including DAB radio, aerodynamic 17in alloys, plenty of leather trim within), the car tested here is the version British buyers will get, so ignore the South Korean numberplate. First deliveries are in April and the e-Niro will get the same seven-year warranty as the marque’s other models, and that includes for the battery back and electric motor.

And a quick note on that battery: Kia initially communicated the car's WLTP range as 301 miles. That figure, the brand now says, was the result of an incorrect testing methodolgy applied by an independent organisation. The urban portion of the test was disproportionately long, and because electric cars use less energy at lower speeds, the driving range duly improved. The official, correct range is 282 miles.

It's doubtful a marginally lower official range will deter many, if any, prospective buyers, and in any case the e-Niro is able to replenish its battery to 80% capacity in less than an hour using a 100kW source. Owners charging in more typical fashion – from a 7.2kW wallbox charger at home – can expect a full charge in roughly nine hours, says Kia. A 50kW charger – now found at many service stations – will get you to 80% in 75 minutes. 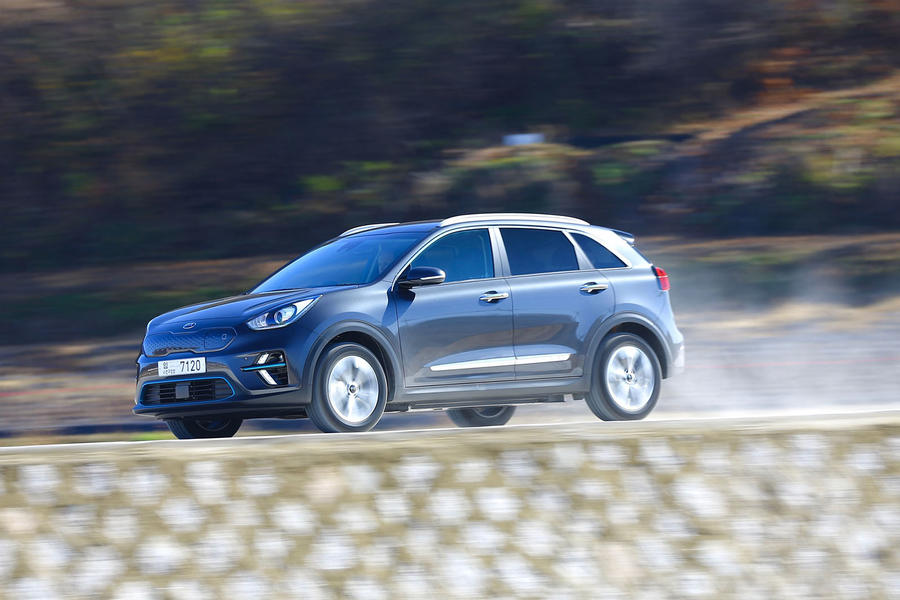 The e-Niro's design language is nothing new to these kinds of vehicles: there’s a blanked-off grille that lends the car a vacant expression and some turquoise details but that’s it. One senior designer described the current industry-wide vacillation over whether to present alternative-fuel models as avant-garde or ordinary as "chaos", and the result is safe but unmemorable.

Inside, there’s a new rotary gear selector on the false transmission tunnel and a sharp seven-inch digital instrument binnacle to match the eight-inch infotainment touchscreen. The ambience is staid but impressively mature, and there’s greater sense of perceived quality than might be unexpected given the twee exterior. We've no complaints about the space on offer, either. 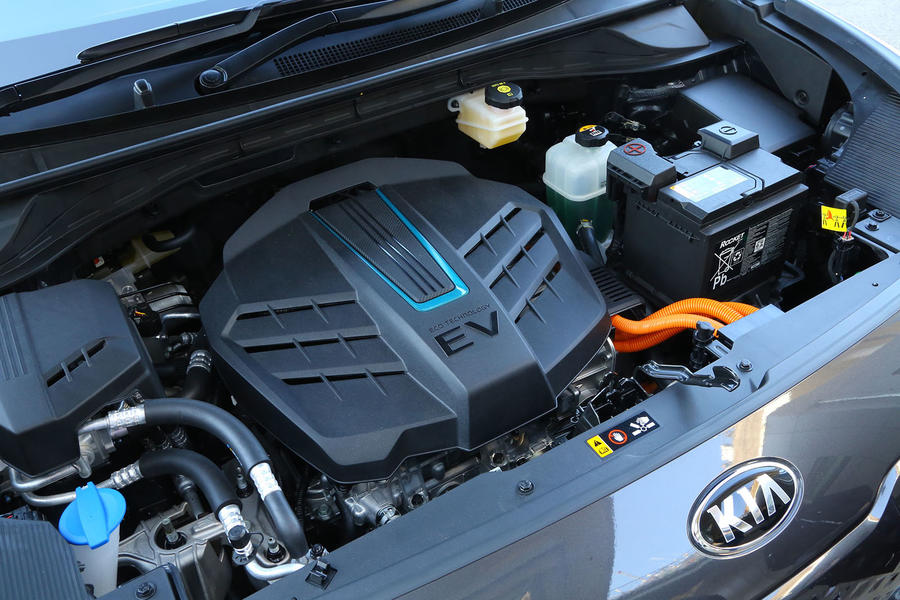 Kia always intended this platform for all-electric duties, but one statistic is nonetheless eye-opening. Where the petrol-hybrid Kia Niro gets a 33kg battery and the plug-in version one weighing 117kg, the low-mounted 64kWh pack in the e-Niro weighs 457kg.

Naturally, carting the mass of a Caterham Seven has some dynamic consequences – ones Kia has attempted to mitigate by upping the car’s spring rates. Body control is passable but the ride only truly settles on glass-smooth surfaces. An inability to iron out smaller corrugations can perhaps be forgiven – sophisticated dampers are the preserve of very expensive cars for a reason – but the e-Niro should still be quieter at a cruise.

But this is still a neat product. One as inoffensive to drive as it is to look at, with light, suitably geared steering, plenty of adjustment in the driving position and a spirited turn of pace from a front-mounted 201bhp motor, particularly with the sharpened throttle-response of Sport mode. Town driving, where the official range is more than 380 miles, is supremely easy-going. Equally, entirely depleting the battery charge in a single sitting would be no chore at all. And for many owners, I suspect the ability to drive from London to Newcastle in one unbroken stint would absolve (at least in part) the busy ride.

One useful innovation is the paddles on the leather steering wheel. With no gears to change, they alter the severity of the regenerative braking and holding the left paddle down brings the e-Niro to a complete halt in short order. Preset gradations mean there is no modulation, alas, and the frustration of this never fades, but Kia deserves credit for this early attempt to better involve EV owners in the driving process.

A more involving chassis set-up should be the next step. That and the fact Kia has a way to go with calibration of the physical brakes themselves. Its engineers could learn a lot from driving Jaguar's Jaguar I-Pace, which blends the effects of motor and caliper to superbly intuitive effect. In the case of the e-Niro, any confidence-inspriring initial bite is non-existent, which might not matter so much if the car wasn’t capable of accruing speed so quickly.

Ultimately, the e-Niro proposition is more compelling than the execution, but it is some proposition and one that moves the game on. On the cost-range continuum, there's nothing to touch it.

In fact, the aggressive price goes a long way to democratising long-range electric driving, so much so that the car’s practicality and stout performance almost feel like a bonus. The e-Niro's inconspicuous packaging of a cutting-edge powertrain will also appeal to many – the sense of familiarity very much welcome in relation to a novel ownership experience.

Like we say, you really have to hand it to Kia. 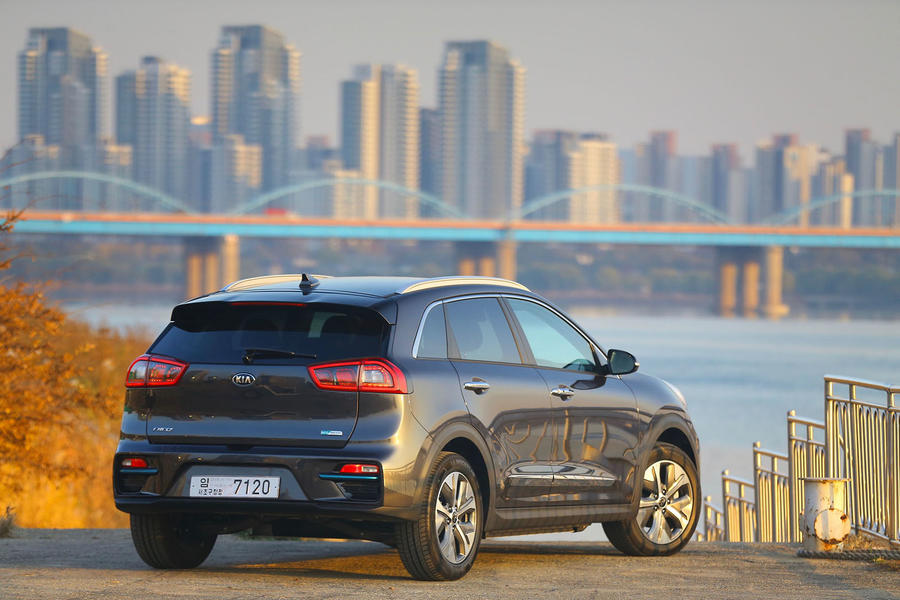 A good car, but not SUV

A good car, but not SUV enough for me, ride and seat height is barely elevated, its more MPV era but as those are desperately untrendy now you can't blame Kia from putting some cladding on and calling it a crossover.What other manufacturers should be more concerned about is you can bet your last dollar that somewhere, right now there are plans for next generation Sportage, Tucson, maybe Santa Fe chassis design that will be EV sympathetic, and Kia/Hyundai don't hang around with design cycles!They already have the technology and drivetrains, surely a £37K 250 mile range EV Tucson can't be far away now. And yes we all know some people drive longer distances but a great many don't and on the odd times they do a recharge stop won't be a deal breaker.

And there's no spare wheel,

And there's no spare wheel, which I DO want.

And there's no spare wheel, which I DO want.

I think all NIRO's only get a TMK, almost all Hybrids forgo the spare wheel choice too.  Annoying I know

But it's an SUV

Excellent value this car may be, but it's still an SUV (with bulk, weight and dynamic compromises) which I do not want.

Excellent value this car may be, but it's still an SUV (with bulk, weight and dynamic compromises) which I do not want.

Agreed I too have no wish for an suv, but they do lend themselves to electric as their higher height gives more room to hide the battery etc without encroaching on interior space. Or so I've read, and due to their height and weight they're already compromised on ride and handling over a saloon so electric versions compromises are probably better hidden, if indeed there are any extra with the electric drivetrain.