BACK TO ALL NEWS
Currently reading: New Kia e-Niro launches with 301 miles of electric range
UP NEXT
So far, so good: 500 miles in a Bentley Bentayga Hybrid

Kia has revealed the European version of the Kia Niro EV, called the e-Niro, at the 2018 Paris motor show. The Nissan Leaf rival will go on sale at the end of this year in the UK.

The e-Niro is based on the existing Niro crossover and will be sold with two variants at launch: one with a 39.2kWh lithium ion battery pack offering a range of up to 193 miles from a full charge, and another using a 64kWh version of the same battery pack offering up to 301 miles of range. Only the latter, larger capacity variant will be sold in the UK, and Kia is targeting a sub £30,000 price with the government grant taken into account.

Both figures are calculated using the new, more real-world WLTP test cycle, with the larger capacity model claiming up to 382 miles on the urban driving cycle. By way of comparison, a Jaguar I-Pace uses a 90kWh battery giving a claimed range of 298 miles on the combined cycle.

Two power outputs are also offered with the e-Niro. The base variant produces 134bhp and 291 lb ft of torque, allowing it to get from 0-62mph in 9.8 seconds. The longer range version produces the same amount of torque, but the motor makes 201bhp. Kia claims a 0-62mph time for that variant of 7.8 seconds. Both put their power through the front wheels only. 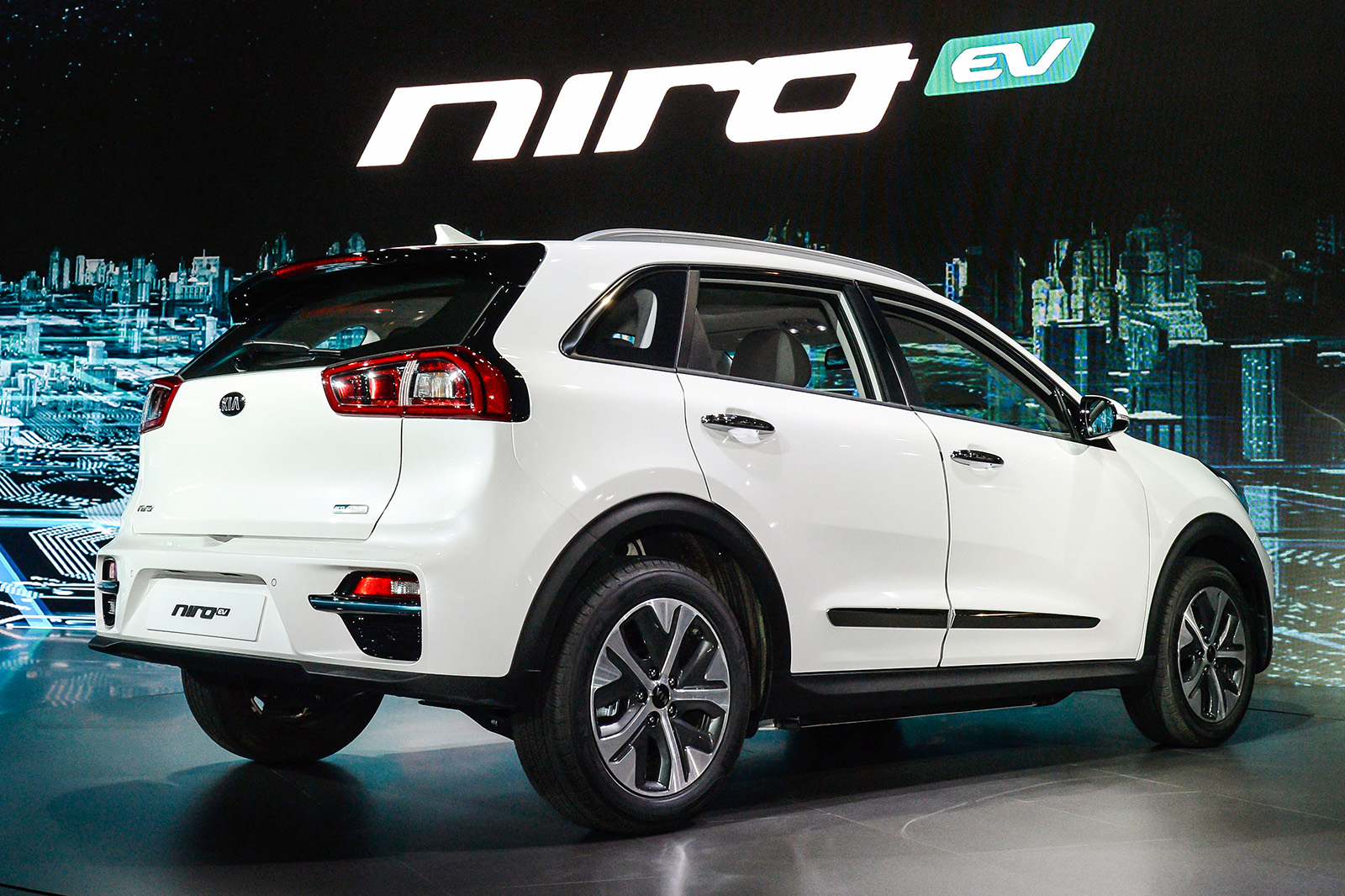 The e-Niro, first previewed by a concept that was unveiled in January, is slightly slower in the 0-62mph sprint than the related Hyundai Kona Electric. However, with an output of 201bhp it is slightly more powerful, albeit with the same 291lb ft of torque as the Kona Electric.

In addition to the usual driver assistance systems of automatic emergency braking and lane-keeping assistance, the e-Niro has Level 2 autonomous capability, akin to the Volkswagen Group's Traffic Jam Assist system, which follows traffic and steers the car within its lane. It operates from a dead stop up to 80mph, although the driver must keep their hands on the wheel at all times.

Further tech includes a battery heating system, designed to insulate the battery from cold temperatures when the e-Niro is plugged in. There is also a pre-conditioning system, allowing buyers to set the car up to heat and cool itself before the journey begins, while an Eco Driving Assistant System gives intelligent guidance on how to extend range, including when to coast or brake. A pair of paddles behind the steering wheel allow you to select the amount of brake regeneration used. 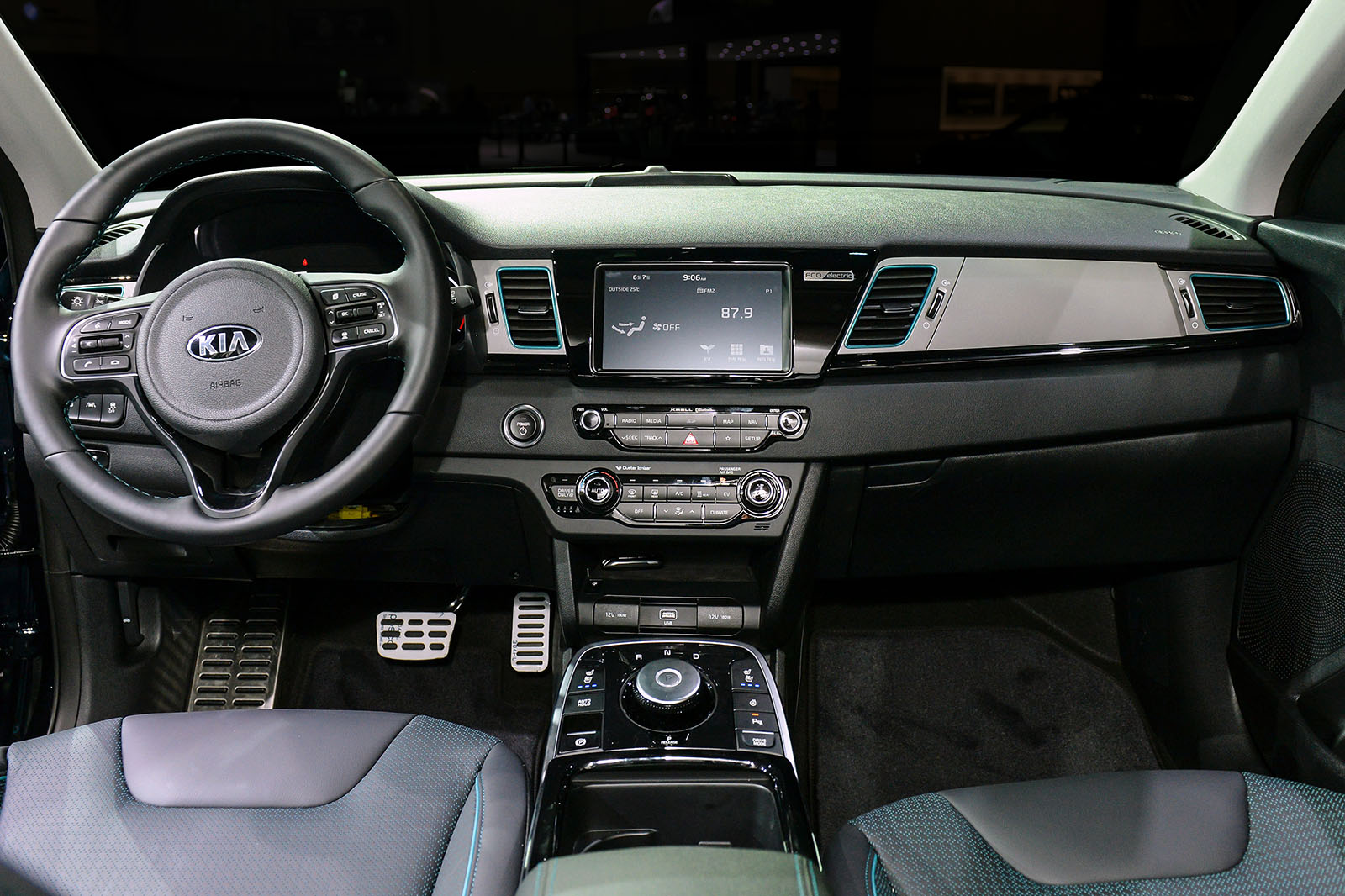 The Niro EV stands out from the hybrid and plug-in hybrid versions with a new front end incorporating a filled-in grille and a charging port, as well as arrow-like daytime running lights. At the rear, it has model-exclusive LED tail-lights.

Inside, there's blue trim to match the highlights on the exterior, while the centre console now accommodates a rotary drive selector in place of the traditional gear selector. The space freed up by the lack of a transmission tunnel also allows for a new storage area in the centre console.  A 7.0in digital instrument display replaces the dials that can show powertrain information as well as the usual functions.

No details of pricing have been revealed as yet, but expect it to start from slightly more than the £25,000 Hyundai Kona Electric on account of its larger size. There will be a price gap between the two battery variants, but the exact cost difference is yet to be detailed.

In June, Kia said it had received 5000 orders for the Niro EV in South Korea. It is sold there alongside the existing hydrogen fuel cell, hybrid and plug-in hybrid versions.

The Niro EV is part of Kia’s ACE (Autonomous, Connected and Eco/Electric) strategy, which plans to offer 16 electrified vehicles by 2025.

Kia aiming to have autonomous cars in citires by 2021

My Leaf's notional 160 mile range is perfect for me, but for occasional trips to see family, the Niro EV's 300 would be much better.  Niro is a much better-looking vehicle than the current Leaf (a re-skin of the old one) and has the benefit of Active Battery Management which means no "Rapidgate" here.

My other half has a Niro Hybrid, and I can honestly say that it is better-designed, better-made and is nicer inside than my Leaf Tekna.  The Niro EV will probably be the same.  Kia \ Hyundai is currently on a roll by making good-quality, well-enginereed cars which while not in most ways exceptional, are excellent value.  This is a skill that the likes of Nissan would do well to try & recover.

Assume  Autocar are just copying a press release with that sub-heading. No way is the Niro a SUV in the original meaning of the abbreviation - Sports Utility Vehicle". Basically it's similar to one of the original family hatchbacks - the Austin Maxi.

It does appear wasteful that they are not just using the existing fuel filler from the standard hybrid as it means a completely different pressing. The Ioniq EV just uses the redundant petrol filler.