From £21,0567
Share review
Our first UK drive of the plug-in hybrid version of the Ioniq confirms its frugality - but it can't challenge for class honours
Share
Open gallery
Close

The third and final variant of the new Hyundai Ioniq hatchback is this, the plug-in hybrid.

Arguably the Ioniq's strongest asset in the fight against the Toyota Prius, the plug-in offers more performance than the regular hybrid and none of the range anxiety associated with the all-electric derivative. As such, the PHEV could very well be the sweet spot of the trio.

Our first go in an Ioniq Plug-in back in May was in Germany, a country known for its smooth roads. We've now driven it on Britain's rougher and bumpier roads, which often prove far more challenging for the suspension of heavy battery-powered cars.

The specification sheet of the Ioniq Plug-in includes bold claims of 247mpg fuel economy and CO2 emissions of just 26g/km. This means you can park in certain areas for less and slip through central London without paying the congestion charge.

The car uses a drivetrain that’s essentially identical to that in the regular Ioniq Hybrid, mating a 104bhp 1.6-litre four-cylinder petrol engine to an electric motor, but the addition of a front-wing-mounted Type II charging socket enables the use of a larger 8.9kW battery and more potent 60bhp electric motor. 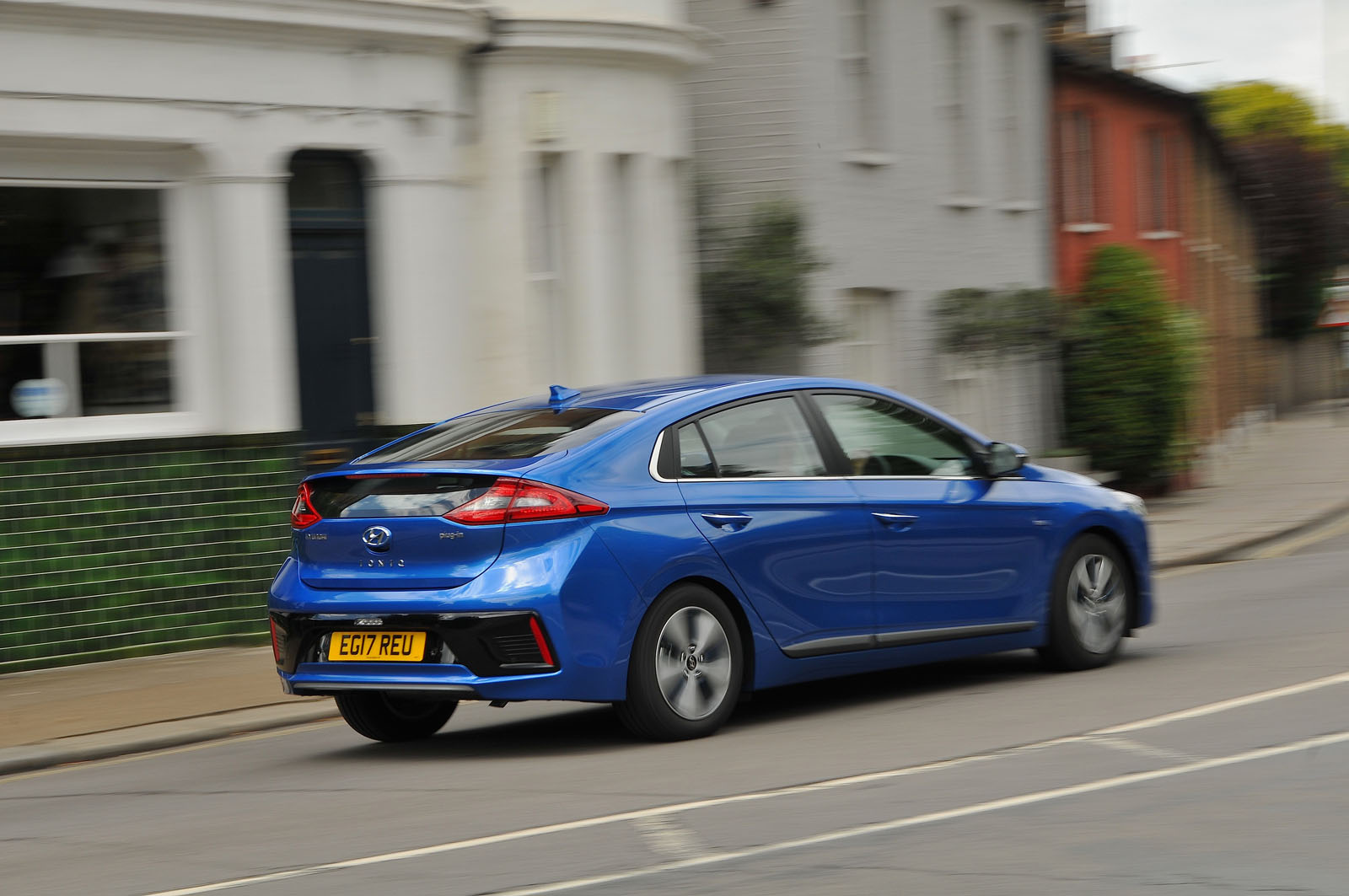 This enlarged electric system, which can be charged from a 16-amp driveway wallbox in just two hours and 15mins, can inject torque to the driveline for longer periods. So, despite having identical peak outputs of 139bhp and 195lb ft to the hybrid, and weighing an additional 125kg, the plug-in’s quoted 0-62mph time is actually 0.2sec quicker at 10.6sec.

Those who dislike the revvy nature of a CVT gearbox, as used by the Prius Plug-in, will be happy to hear the Ioniq drives its front wheels via a six-speed dual-clutch automatic. There are also paddles shifters behind the steering wheel.

Our test car was the top-spec Premium SE, which comes with leather seats, steering wheel and a gearlever, and has soft-touch plastics on the top of the dashboard. There’s also a 7.0in touchscreen infotainment system with HD graphics as standard on all plug-in models. This features Apple CarPlay and Android Auto smartphone compatibility.

As you would expect from a plug-in hybrid, this is not a car to be hustled. From the very first mile, the plug-in exhibits the same characteristics as its Ioniq siblings: it's laid-back and hushed, and it always seems to be caught by surprise when asked for maximum acceleration. But this relaxed demeanour won’t have come by accident, given that many buyers in this segment opt for electrified models for that very reason.

When fully charged, the car defaults to EV mode, where the motor does all of the work and the petrol engine only comes into life under heavy acceleration. It’s a shame that you can’t opt to stick with electric power for longer, because the engine kicks in earlier than seems necessary. But even with its occasional intervention, it's still easy to achieve an average miles per gallon that far exceed the trip computer’s 99.9mpg maximum readout. Hyundai claims that the batteries can offer 39 miles of range in this mode, although our urban test brought that figure closer to 30.

When left to make its own decisions in HEV mode, the electric motor does all the work when pulling away, before the petrol engine gently contributes as the speedo rolls into double digits. With gentle throttle applications it’s a seamless process, but ask for more power and the engine’s contribution can suddenly jolt acceleration with a gruff note to match. Keep the throttle pressed and the dual-clutch gearbox, despite being quick-shifting, does noticeably break apart acceleration, making the Ioniq Plug-in feel more conventional than the uninterrupted progress of the similar Prius. Drive with the flow of traffic and you’ll be rewarded with urban economy of around 55mpg. 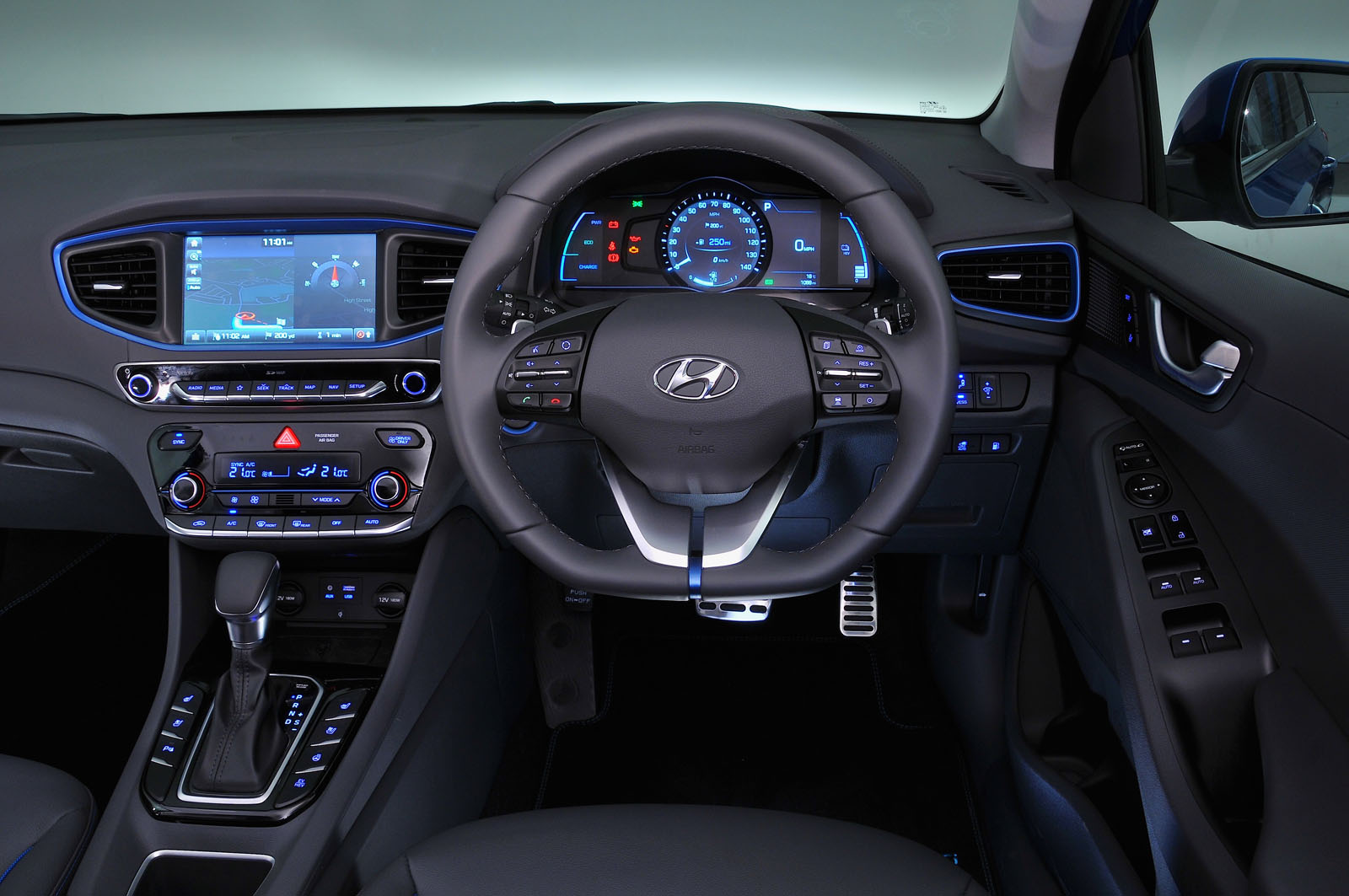 Switch the gearlever across into Sport mode and the digital instrument cluster ahead turns red and swaps a speedo for a rev counter, with the speed displayed digitally beneath. The instant response of the electric motor does make the car feel quicker than the 0-62mph time suggests, but once you're rolling, progress remains at best steady. This, coupled with the car’s roly-poly suspension that still manages to vibrate over road imperfections, emphasises the car’s eco character.

As you'd expect, the satisfaction in driving the Ioniq Plug-in comes not from straining its hybrid powertrain, but from chasing high fuel economy and maximising range. The car’s digital instrument cluster permanently displays where energy is moving, showing when charge is being gathered by the regenerative system and when it’s being depleted under acceleration. Even when you're coasting the system can collect energy – we noticed a notch of extra battery charge reappeared when coasting down a hill for 20 seconds – showing how eco-friendly driving can have a significant impact on fuel usage in the Ioniq Plug-in.

Venture onto the motorway and road noise can get rather loud, especially over concrete surfaces, although the impact of this is perhaps heightened thanks to the lack of drivetrain noise. The fitment of adaptive cruise control and lane-keeping assist makes the scenario effortless, from a driver’s point of view, and we averaged more than 80mpg on a run at outside lane pace.

And what of the passengers? They certainly aren't short of space, with plenty of knee room in the back. Although, like in the Prius Plug-in, space for a middle rear passenger is narrow. 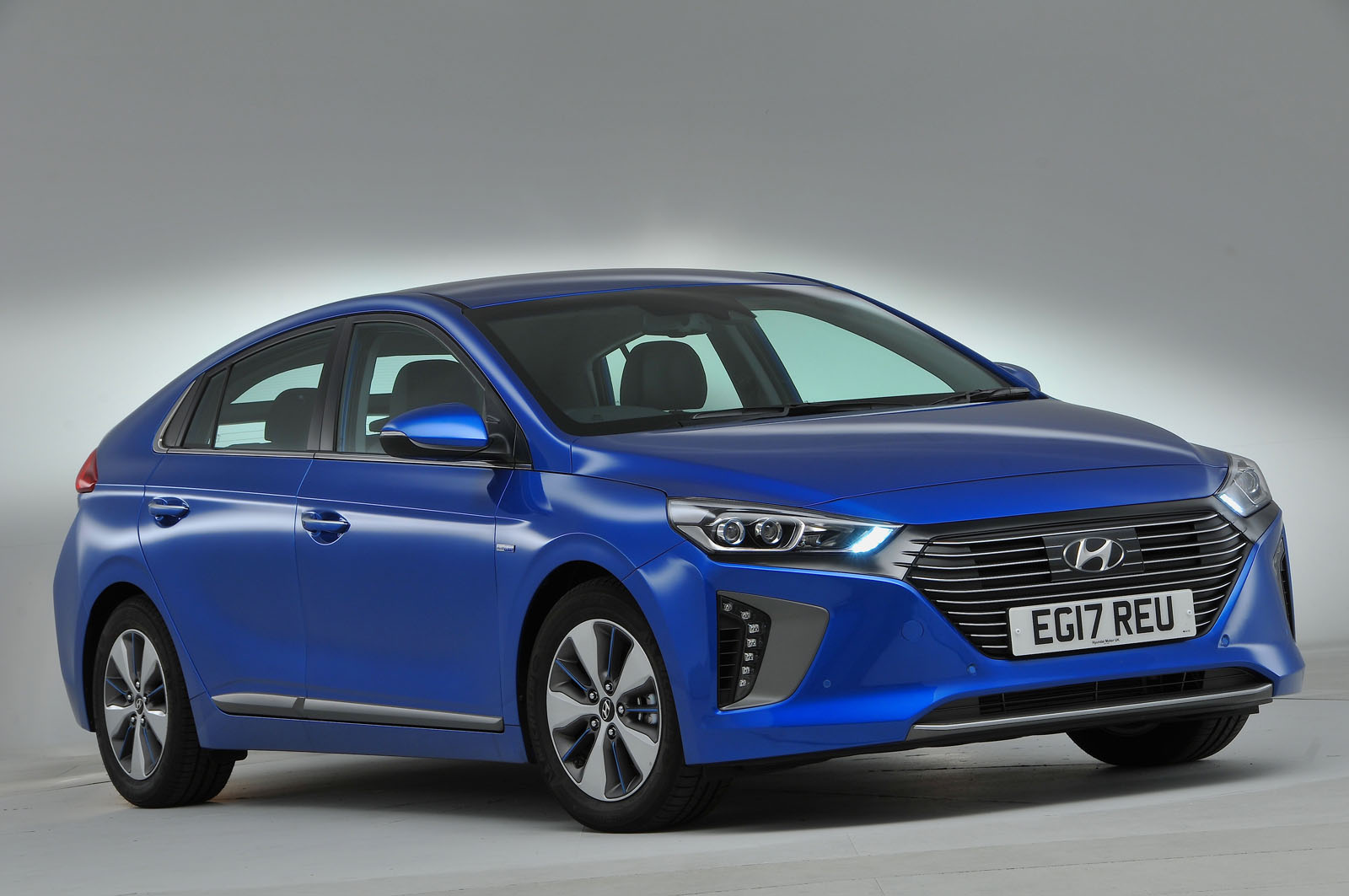 The Ioniq Plug-in is arguably the most complete car of its three-powertrain family, appearing best suited to this transition period from combustion engine to electric. It certainly gives the Toyota Prius Plug-in a run for its money, but initial impressions still suggest the Prius will appeal more for those seeking maximum cost-effective mileage.

Then there’s the Volkswagen Golf GTE, which remains the pick of the class for those able to stretch to its £30,635 asking price. The Golf lacks the lengthy standard spec list of the Hyundai, meaning those who prioritise value for money over all else will find the Ioniq Plug-in hard to ignore.

Overall though, the Hyundai’s shortfalls mean the GTE undoubtedly remains the most rounded plug-in hybrid in this segment.

You are right. I have a friend who has a Mercedes C-class PHEV company car. The car is a perk which he never uses for business. He has never plugged it in once, and has no intention of ever doing so. But he certainly enjoys lower BiK tax.

For such a high spec car that's fairly good looking both in and out it deserves to sell. As to battery size in a PHEV, this has to be the way forward. Bearing in mind most people journeies are < 30 miles so you should be able to half your fuel costs.

All the comments, both poitive and negative, about 257 npg are pretty pointless as it entirely depends on how you use it and how regimented you are in plugging it in everynight

Having said all that I'm still a bit undecided on the long term future of dual engine cars.

I wonder if for most people

I wonder if for most people this type of car would be enough. For most of my friends and neighbors 40 miles would cover 90% of their driving with the engine not needed at all with the back up of an engine for when doing those occasional longer journeys.

I don't see it as a car for Autocar readers but this looks interesting for the average driver. At some point someone will remember what the 306 DTurbo did for diesel sales and will develop a well priced, good looking plug in with strong performance that will sell to younger drivers by the boatload.