This is Hyundai’s first mainstream hybrid car, which is part of Hyundai’s aim to have 22 ‘eco-friendly’ cars on sale by 2020: 12 hybrids, six plug-in hybrids, two electric vehicles and two fuel cell vehicles.

Interestingly, the Ioniq will account for three of these new models. As well as a conventional hybrid model, the car will also be sold as a plug-in hybrid and a pure EV.

The core of the Ioniq’s engineering is to keep it simple, and it’s certainly rather simpler than Toyota’s Toyota Prius. This simplicity is also intended to keep the costs down, so this hybrid should arrive in showrooms with a price that is not much more than a modern diesel car with an EU6-rated engine.

Hyundai says it also wanted to fix a couple of other issues that have been criticised on hybrids such as the Prius and Honda Insight. Most important was eliminating the droning and ‘elastic’ sense of acceleration associated with CVT hybrid transmissions. Hyundai is also trying to engender a degree of driving pleasure and to try to make the car as refined as possible.

The first money-saving move was to build the Ioniq on a modified version of the new platform underpinning the new Vauxhall Astra-sized Elantra model. As well as getting a bespoke multi-link rear axle (and having much of the suspension components made of aluminium), the rear half of the floorpan is modified to incorporate three different battery capacities.

This hybrid version gets a small 1.5kWh battery that is slotted into the same space under the rear seats as the fuel tank. The latter is squeezed down to a 45-litre capacity.

Work on refinement included upgraded insulation behind the dash and in the A and B-pillars, thicker window glass and a sound-deadening film on the windscreen.

The plug-in hybrid and EV versions of the Ioniq get progressively bigger battery packs that are squeezed under the boot floor and, in the EV, also replace the fuel tank. There’s no news on the size of these battery packs, but Hyundai is estimating an EV-only range of 32 miles for the PHEV and 155 miles for the EV.

The new hybrid transmission also has simplicity on its side. Hyundai says it is the first company to build a DSG gearbox that shifts quickly enough to be used in conjunction with a petrol engine and the electric motor. The six-speed ’box uses dry clutches, gets Sport and Eco settings and is said to be 95% efficient in transferring the engine’s power.

The petrol engine is a development of the company’s existing Kappa petrol family, which is said to be 40% thermally efficient - unusually high for a petrol motor and matching the latest Toyota petrol units for theoretical efficiency.

The exterior styling deliberately avoids Prius-like individuality. It’s quite modestly sized - not dissimilar to the Mk2 Honda Insight - and there are a few obvious ‘eco car’ markers such as the large, blank grille, sizeable LED running lights and the twin-window hatchback.

The interior is similarly toned down and restrained. It’s dominated by the 7.0in dash screen and neatly aligned rows of switches for the audio, navigation and climate control systems. There’s a big, useful cubby space at the base of the centre console that has twin power sockets and an induction charging pad for mobile phones. There’s even a big slot moulded by the centre armrest for a tablet computer.

The Ioniq further advances the clever heater technology from the Kia Soul EV, offering a driver-only setting, which helps to reduce power consumption. 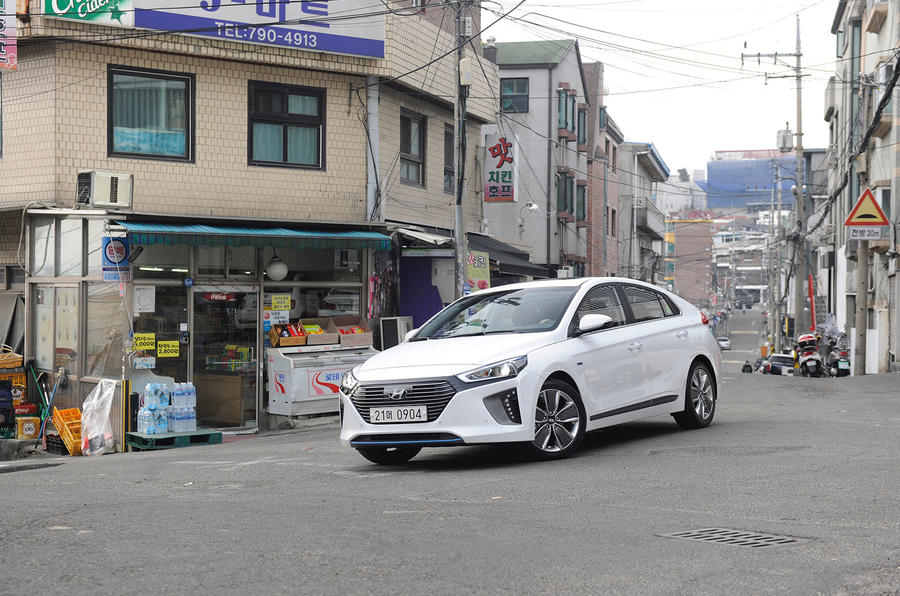 ‘Effortless’ is probably the best way of describing the Ioniq. Driving it out into the Seoul morning traffic, it’s clear within the first few hundred yards that this is a car engineered for the lower speeds and heavy traffic of cities such as Tokyo and Los Angeles.

The chassis tuning - in this Korean-spec version at least - is on the pleasant side of firm. There’s a little bump-thump from the rear end at low speeds on inner-city roads, but the Ioniq is almost EV-like in its progress.

There’s no hesitation from this transmission - the company really has delivered on developing a hybrid with a sense of ‘direct drive’ - and it’s smooth and very refined in city situations, especially when the engine is in stop-start mode. The braking system also seemed a step ahead of many regenerative systems, switching smoothly between braking on the motor and braking mechanically.

On a Seoul urban motorway network with a speed limit of just 56mph, it was difficult to tell how well the Ioniq would cope with the high-speed traffic on UK motorways. But again, the DSG transmission is impressively normal in its responses to demands for acceleration, shifting quickly and locking the engine back into the front wheels without hunting.

On the run out to the hills east of Seoul, the Ioniq averaged nearly 52mpg - impressive when the engine had just 500 miles under its camshafts and the exterior temperature was -6deg. Then again, the whole journey was run at a near-ideal speed for maximum economy.

These road conditions showed that the chassis has some life and character, although it is hardly a compelling driver’s car. The steering is light but quite well judged to allow the driver to place the car accurately and the body control is nicely judged. 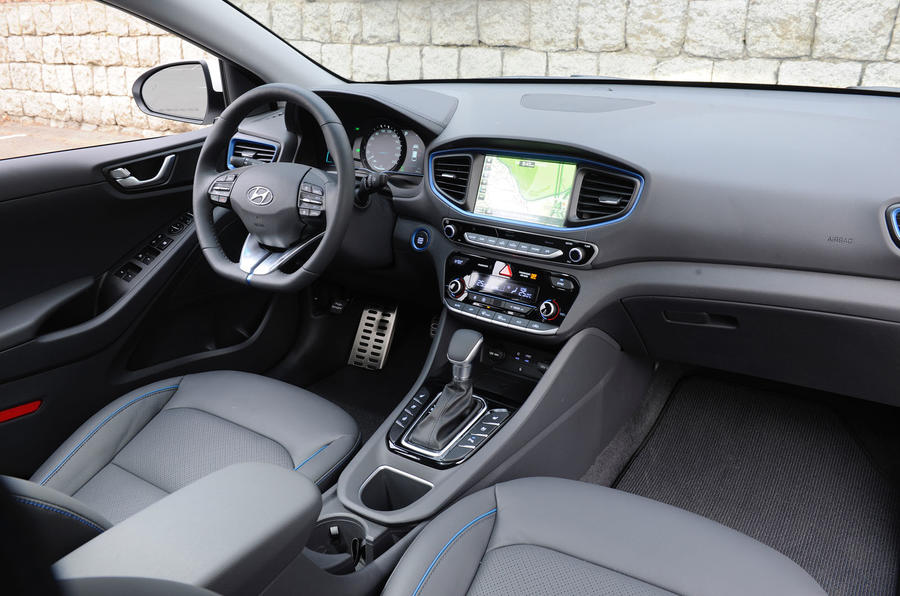 The Ioniq is probably the most normal-feeling small hybrid yet. Hyundai was quite right in identifying what could be improved on the benchmark Prius 3.

This car has a lightness about it and a pleasant transmission that is also well suited to motorway use. It is particularly impressive on A-roads, where the very quick-thinking engine control software takes best advantage of the immediate road conditions. On the downside, it may be a little too self-effacing both in presentation and driving character.

It would be a difficult switch from a conventional turbodiesel to a car like the Ioniq. While a driver can push the diesel quite hard and still be rewarded with a combination of speed and frugality, this hybrid would have to be piloted thoughtfully to extract maximum economy.

It’s not a car that wants to be pushed along. It requires a light foot and a light touch on the wheel. But it is quite satisfying when driven in that way, especially when keeping a close eye on the car’s energy use.

With the real-world pollution of diesel cars likely to be under scrutiny for the next few years, the Ioniq looks like it will finally offer a price competitive alternative to derv. It’ll be whisper-clean in urban areas, but it requires a different mindset to make the best of it. 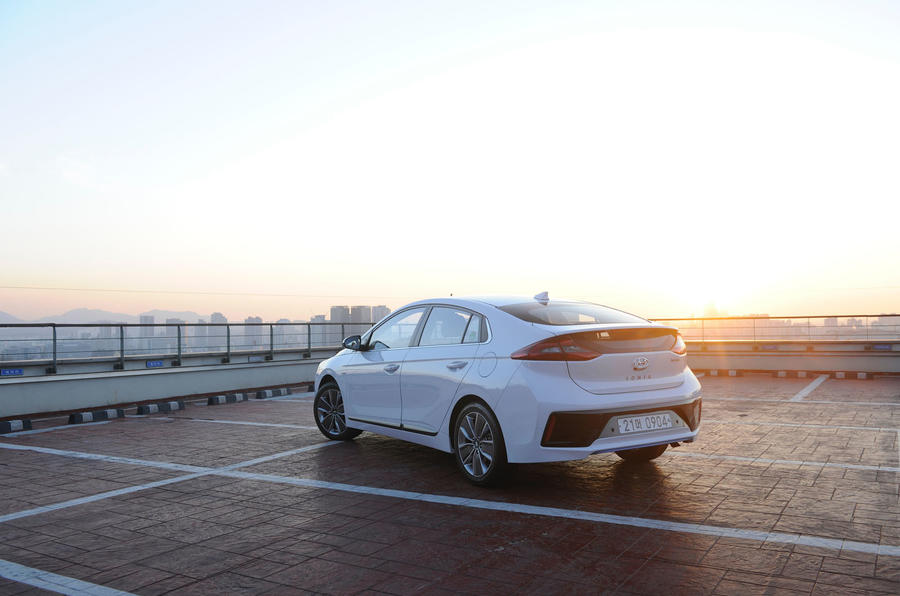 Should I buy one ?

Is it a real question ? Hyundai's quality has been highly increased over last years. Ioniq could be a big hit for them.
Looking forward to go and see it in Geneva next month ! Even if I doubt about the simplicity of the transmission and driving compared to the Prius!
gregor60 18 February 2016

I think the Prius transmission has: 2 motor generators (1 moving part each), 3 planetary gears, a carrier for these gears and a ring gear. No reverse - it's done electrically. I know people who have had VW DSGs without problems, but until there's more evidence, I'll put up with transmission whine as a price to pay for proven reliability. The most complex thing about a Prius is the braking system which has to "decide" whether to use friction or regenerative braking. In practice, though, the contro of the system is quite similar to ABS.
Having said all that, I really like this car and have had good experience with Hyundai / Kia reliability in the past. Here's hoping...
xxxx 17 February 2016

Will do as well as the Prius

if not better if they can keep to around £18,000. Interesting comment for me was "The plug-in hybrid and EV versions of the Ioniq get progressively bigger battery", always thought this was the way forward because if you were going to plug-in then 32 miles should just be a starting point. A genuine 50 would be a good goal for just a couple of hundred pound extra please. Anyhow looking forward to the EV version for Focus money.
View all comments (5)