It was only a matter of time before ace Ford-fettler Mountune turned its attention to the Ford Puma ST. Not only are crossovers hugely popular and therefore a potentially lucrative market to tap into, there’s also the fact that its oily bits are identical to those of the Fiesta ST that the Essex firm has already managed to massage extra muscle out of.

However, rather than just bolt on the M235 kit already seen on the Fiesta, Mountune has taken the opportunity to unleash even more performance from the car’s turbocharged 1.5-litre triple, creating the even hotter M260 kit. Available for both the Puma and the Fiesta, this upgrade brings the total power to 256bhp (up from 197bhp on the standard car), while torque swells from an already adequate 236lb ft to an extremely healthy 269lb ft.

As before, the increases come courtesy of a remapped ECU, the programming of which is made easy thanks to Mountune’s Bluetooth-enabled OBD dongle and mTune Smartflash app, which can be downloaded to your smartphone. Simply plug the small transponder into the car’s diagnostics port beneath the steering wheel, then fire up your phone and select your power upgrade. The whole process takes less than five minutes.

Mountune claims that you can just upgrade the software if you want (£675 for the M260 kit, or £99 if you’ve already forked out for the £575 M235), but it recommends some hardware changes if you want to get the best out of your Puma, especially if you plan on taking to the track. The first and foremost addition is the alloy intercooler (£549) and associated plumbing (£165), which more effectively keeps the air intake charge temperatures down. Also recommended is the £239 induction kit that comprises a bespoke aluminium chamber housing a high-flow air filter.

Our car was also fitted with a prototype twin-exit rear exhaust silencer. Essentially a modified Fiesta set-up, it is said to be very close in design, effectiveness and tone to a Puma-specific item that will be available to customers shortly.

Other than that, our Puma is pretty much standard, aside from some trademark Mountune stripes running the length of its flanks and 19in Clubsport OZ Leggera alloy wheels, wrapped here in Michelin Pilot Sport Cup 2 rubber. As yet there are no Fiesta-style suspension and brake upgrades, but Mountune is working on them. 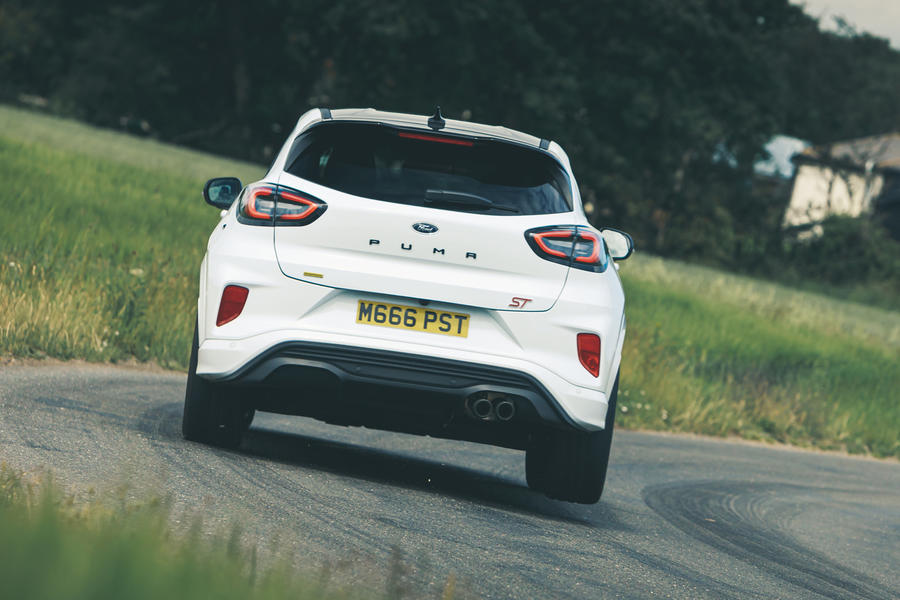 Prod the starter and the Puma fires into life with a baritone burble that will be familiar to owners of Mountune’s go-faster Fiestas, that freer flowing exhaust giving an aural heads-up to this crossover’s under-bonnet infection of steroids.

Get under way and you instantly feel the extra mid-range muscle, that 269lb ft helping to shake off the subtle sense of inertia that afflicts the standard Ford Puma. In fact, there is so much twist above 2000rpm that in the damp conditions we set out in, those track-biased Cup 2s can easily be made to spin away their traction in first, second and third gear.

As the roads dry out, it’s possible to more fully exploit the upgraded engine, the thick seam of torque giving the Puma a genuinely startling turn of cross-country speed. Of course it will rev happily, and the extra power at the top end can be felt in a more concerted rush for the redline and a nicely understated rasp from that exhaust, but it does its best work between 2000rpm and 4500rpm, where you can short-shift up the nicely mechanical six-speed ’box (the smoothly contoured £59 Mountune gearknob feeling better in your hand than the standard item).

If you want, there’s a ‘flat-shift’ tuning option that allows whip-crack gearchanges without lifting the throttle, or you can go for what the engineers grinningly refer to as the ASMO (Anti-Social Mountune Overrun) map that gives the same power and torque but ditches the full-bore gearchange function for more pops, farts and bangs from the exhaust (apparently this is the option favoured by its younger clientele). It’s not subtle, but the sensation of being chased down the road by distant gunfire isn’t without its appeal.

Our car is based on the Performance Pack upgrade, which means a limited-slip diff that boosts traction but also enjoys an energetic game of ‘hunt the camber’. With all that extra torque being channelled through the front axle, the Puma can get very lively over uneven surfaces, the steering twitching this way and that as you come on and off the power. It’s not wayward as such, but on a bumpy road you’ll need your wits about you.

The rest of the car is, unsurprisingly, very like the standard ST – meaning it’s huge fun but not without its flaws. You sit high behind the wheel, which gives you a great view out on unfamiliar roads, but also means you feel perched on rather than ensconced in the car. The steering is fast and accurate and there’s plenty of turn-in bite (particularly when those sticky Michelins are up to temperature), yet there’s enough adjustability to get a surprising degree of mid-corner rotation (although the ESP never fully disengages). It’s not as expressive and entertaining as the Fiesta, but then it’s higher and heavier.

Mountune is still in the very early days of fashioning a suspension upgrade kit similar to that in the Fiesta but, according to its engineers, the end result will definitely be lower than the standard car in an effort to lower the centre of gravity and enhance agility. That said, such is the quality of the chassis (for a jacked-up supermini) that even in its current state, the ST’s chassis is more than up to the task of handling the extra power, occasional bouts of hyperactive torque steer aside.

What would also be welcome is an improvement in the standard version’s sharp low-speed ride, the stiff-legged Puma slavishly following topography of the surface rather than breathing with it. It gets better at speed, when the extra loads give the firmer springs and dampers something to really get their teeth into, reining in the high-riding body’s most aggressive vertical movements with impressive control. 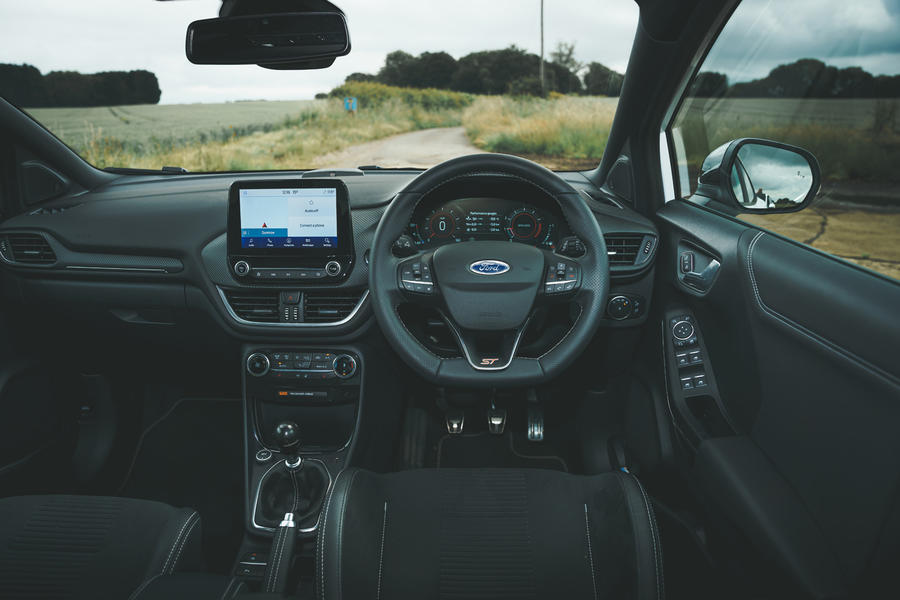 If you have your heart set on a Puma ST, then we would definitely recommend sending some of your hard-earned Mountune’s way. The extra power and, crucially, torque help address one of the standard car’s biggest weaknesses: the sense that the increase in mass over a Fiesta had blunted the standard engine’s bite. As a result, the Ford is now a seriously quick point-to-point machine and great fun to boot.

Yes, we’re still not sure where the Puma fits into the fast Ford framework (the Fiesta ST is cheaper and more entertaining, the Ford Focus ST more usable and barely costs any more), but there’s no doubt it’s a quicker and more appealing car with Mountune’s modifications. 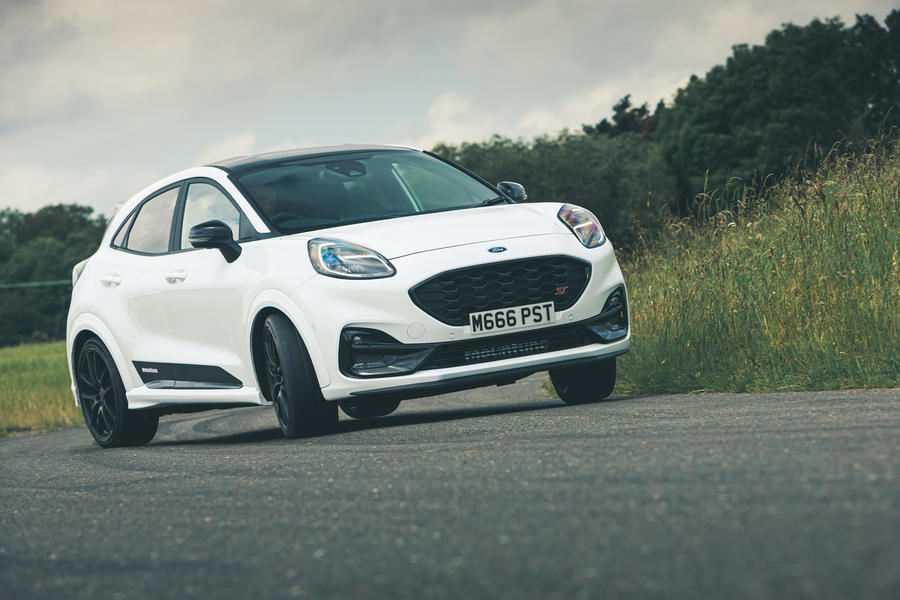 Log in or register to post comments
michael knight 30 June 2021
"the ASMO (Anti-Social Mountune Overrun) map that gives the same power and torque but ditches the full-bore gearchange function for more pops, farts and bangs from the exhaust (apparently this is the option favoured by its younger clientele)"
Ah yes, the bellend button.