7
Share review
Volvo revives the T5 badge for its V90 executive estate. Can it live up to the reputations of past estates wearing the badge?
Share
Open gallery
Close

There was a time, about fifteen years ago, where the combination of a boxy Volvo body and the T5 bootlid badge struck fear into the eyes of car criminals and speeders across the country.

Whereas today you’re overwhelmingly likely to be pulled over by a diesel BMW of some vintage, the UK traffic police of the early 2000s favoured Volvos, and their particular weapon of choice was the V70 T5. Its combination of unassuming looks, long-legged comfort and powerful five-cylinder turbocharged petrol motor made it ideal for the multi-purpose role of policing Britain’s roads.

Now, things have changed - not just in the constabularies but also on the forecourts. Volvo as a brand has transformed, as have its products, and in the V70’s successor, the V90, the T5 badge carries much less significance than before.

For starters, it now refers to a four-cylinder engine, albeit one that’s still heavily turbocharged. But it’s also no longer the range-topper. Far from it, indeed, as the T5 sits above the entry-level T4 in a petrol range that runs all the way up to the 401bhp T8 plug-in hybrid.

Despite this new mid-range status, the V90 T5 is still a large family estate that cracks 0-60mph in just 6.7sec. In the R-Design Pro spec we have here, it's also a £46,000 car before options. So, should it be back on the traffic cops’ shortlist? 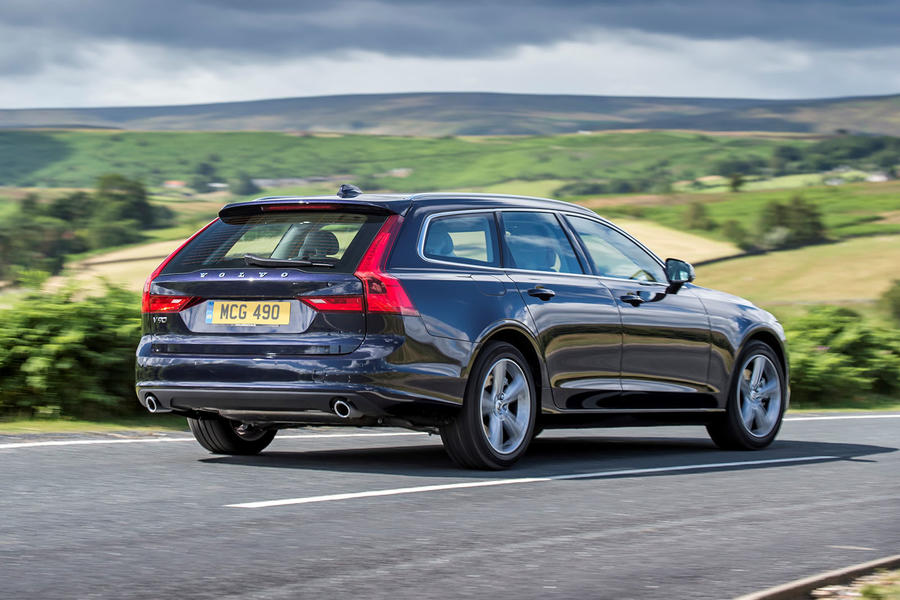 This is deeply desirable, well appointed and likeable family transport, which should come as no surprise if you’ve read any other of Autocar’s reviews of the V90 since it was launched in 2017. What it still isn’t, however, is capable of truly satisfying enthusiastic drivers.

As with most executive estates at this price point, speccing the V90 is a fine art. While the D4 and D5 are still important range mainstays, buyer’s attention is gradually turning to the petrol models across the board. The T5 has the potential to be the best compromise in terms of performance, price and economy.

The 247bhp on tap puts the V90 right in the firing line of rivals such as the identically powered Jaguar XF Sportbrake 25t and BMW 530i Touring. While we bemoan the T5’s loss of a cylinder in this guise, both of those rivals are also propelled by four-pots, despite their names perhaps suggesting otherwise.

The Volvo’s 2.0-litre unit majors on refinement over excitement, which is in keeping with the rest of the car. It fires up almost imperceptibly and remains utterly smooth and unobtrusive throughout most of its rev band, only becoming raucous at the upper end, where few owners are likely to regularly venture. It’s a more appealing prospect than the diesel for around-town mooching, and it fits in well with the V90’s already impressive high-speed noise isolation.

Outright performance is respectable rather than outstanding. It picks up strongly enough once the sometimes-hesitant gearbox has chosen a ratio, partly thanks to the inclusion of Volvo’s clever PowerPulse tech, which uses a compressor to inject cold air into the exhaust manifold and spool the turbocharger more rapidly.

However, the near 100lb ft torque deficit of this petrol over the D5 diesel is still evident, with notably more revs and effort required to get it up to speed yet little reward (in terms of acceleration or aural enjoyment) for extending it beyond 4500rpm.

One surprising element of the T5’s stat list is that it doesn’t lose out in the official economy figures to the T4, which is nearly two seconds slower in the 0-60mph sprint. We managed a fair but not remarkable 31mpg in mixed driving - that’s about 15mpg less than we’d expect from the D5 over the same route.

The fact that the T5 makes serene progress and isn’t particularly fast means that it’s a good fit for the big Volvo’s dynamics. A few hundred yards is all it takes for you to realise that this is a different proposition to the XF, with a disconnected feel to the steering and a soft, plushily damped ride. An occasional brittleness around town is most likely due to our test car’s 20in wheels, but with the adaptive dampers and optional rear suspension fitted, the V90 is one of the more cosseting executive estates.

Yet it does balance its comfort levels with cornering composure. The steering is accurate enough and its weighting isn’t too light, but it’s less direct and incisive than the 5 Series' rack. The V90 also feels somewhat wallowy when you up the pace, with worse-than-average body control and a propensity to be upset by mid-corner potholes. 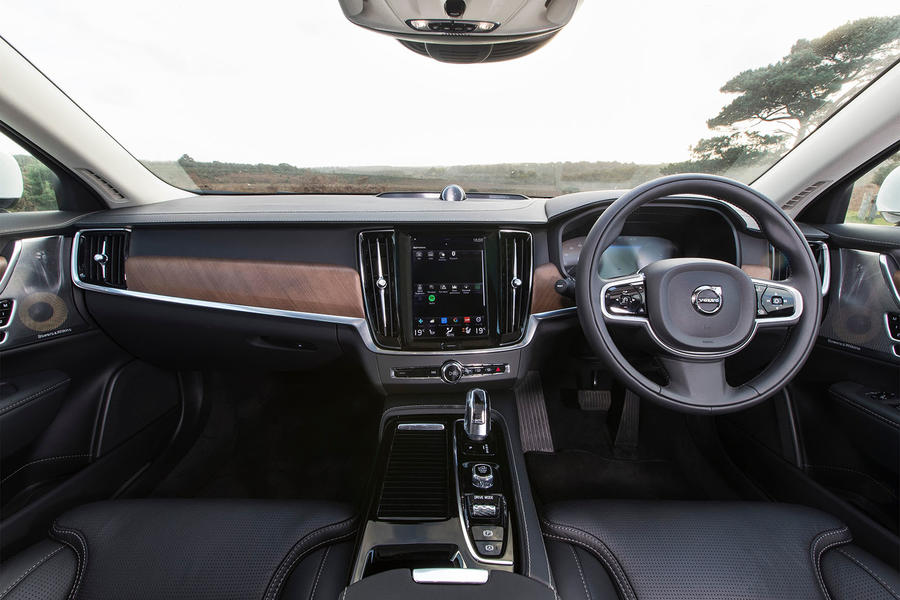 The V90 T5 is a fine choice for those who want an executive estate to prioritise refinement and cruising ability, but you'd have to be ardently against the idea of diesel to consider it over the excellent D5.

After all, the petrol will prove significantly more costly to keep full of fuel but doesn’t balance that with a worthwhile increase in character or performance. The T6 and T8 feel, unsurprisingly, considerably more effortless to drive quickly, but so does the D5.

The rest of the V90’s traits remain the same. The interior is right up there with the best the Germans can offer in terms of quality and equipment and ahead of most in offering a real feel-good factor. It’s roomy, too.

But the diesel engine remains a more effective all-round package that’s better suited to the car. 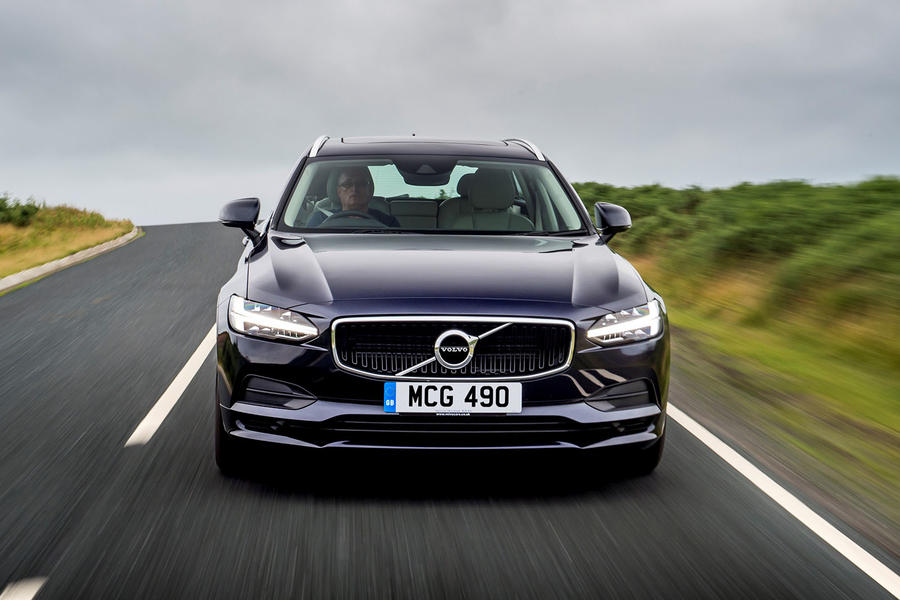 Are you as passionate about cars as we are?
Get all the best car news, reviews and opinion direct to your inbox three times a week.
Subscribe to the Autocar newsletter now.
Advertisement
Share review
Add a comment…