8
Most extreme road-legal Ferrari yet arrives in the UK, but is 986bhp ever usable?
Open gallery
Close

You could drive this new Ferrari for a month and never find an occasion when the road ahead and your backbone combined adequately for you to send the right-foot pedal to the floor.

The SF90 Stradale is many things: the first ever mid-engined Ferrari with four-wheel drive, the first Ferrari with true plug-in hybrid capability and the first road-legal Ferrari to possess a thousand metric horsepower. But above all else, and for the curious souls who do manage to contrive an opportunity to unleash it, the SF90 is satanically quick.

I won’t steal thunder from an upcoming, 4000-word full road test of this novel supercar, but know that when you see the raw numbers, you will find both the car’s lap-time at MIRA and its straight-speed performance quite shocking. In the meantime, this is a brief dispatch following our first taste of the SF90 on British roads.

It’s also a chance to reacquaint ourselves with an exceedingly complex car with a correspondingly high asking price. The SF90 starts at £375,000, despite the fact that neither it nor its Spider sister is limited-production, as was the LaFerrari. Without a composite tub to complicate matters, they’re assembled on the same lines as the F8 Tributo and 812 Superfast.

The example seen here is even more expensive, courtesy of the £40,000 Assetto Fiorano package, which adds track-day flair. It brings fixed-rate dampers from Formula 1 supplier Multimatic and titanium springs; as such there’s no forgiving ‘Bumpy Road’ mode, as you get with the regular multi-mode dampers. Also included is a titanium exhaust, carbon door cards and, in case you somehow missed it, an aggressive rear wing-cum-spoiler, whose central panel can lower to cut off air through-flow by creating an enormous Gurney flap.

But the main event is the plug-in hybrid powertrain. Much more detail will be forthcoming in the road test, but in short, the 8000rpm V8 from the F8 Tributo is has been modified and bored out for the application, with the two turbochargers repositioned for a lower centre of gravity and modifications to the injection for better propagation. Between this reworked V8 and a dual-clutch gearbox then sits one of the SF90’s three electric motors – a slim axial-flux motor a mere 72mm thick that’s complemented by two cylindrical motors on the front axle, one for each wheel. 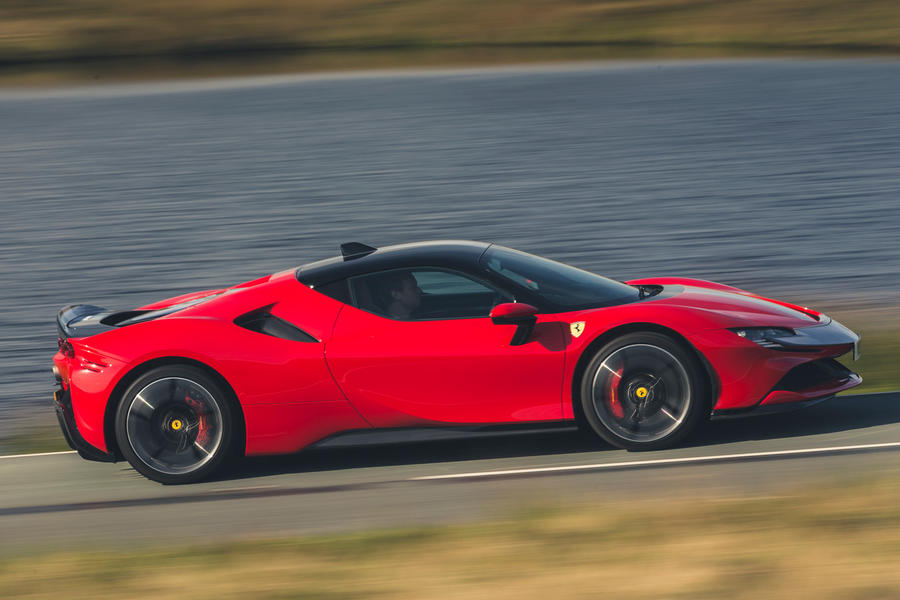 That proposition is one that will be mostly familiar to anyone who has driven a modern mid-engined Ferrari, only advanced somewhat.

Start it via the touch-sensitive panel on the steering wheel and the SF90 defaults to Hybrid mode and is silent but for a synthetic hum piped into the cabin. It moves smoothly and intuitively on electricity and cuts an easy-going figure with good forward visibility and delicate steering.

Unless you have the car in its dedicated eDrive EV mode, only when you call for more acceleration than the combined 133bhp of the front motors can give (or you deplete the drive battery) does the V8 ignite. It often does so in booming cold-start style with all the exhaust valves open, so boy do you know about it. All four of the SF90’s power sources are now on stream, so you have 986bhp and 590lb ft to play with.

Even in the perfect environment, it takes a while before you can even begin to contemplate using all that power and torque, and while you’re getting your head in the game, other things become obvious. Firstly, the SF90 rides surprisingly well, even on its Assetto Fiorano suspension. Very poor surfaces are punishing and cabin noise is an issue on the motorway, but most of the time, the body of this unconventionally heavy Ferrari feels beautifully supported and moves fluidly. In truth, few if any rivals can match it in this respect.

Fine ride quality is the canvas upon which the car’s balance then comes to the fore. The steering remains quick to respond in the modern Ferrari style, but it’s no longer ludicrously reactive (hello F12 Berlinetta), and it allows the SF90 to be fed into bends with stunning precision. The rear axle then diligently follows suit, and as you begin to up the ante, you will notice that the front motors gently muck in and give the car that sense of perfect weight distribution, and with it immense stability and unwavering grip.

It can be tricky to get heat into the Michelin tyres, but do so and the SF90 is possibly the fastest point-to-point road car in the world, such is its ability to intuitively translate power into progress.

There’s a truly scalpel-like quality to the way this Ferrari strings together bends. And while that’s also the case with the F8 Tributo, the plug-in hybrid model maintains its composure under greater duress, at least on the road, where commitment levels remain sensible. Here the SF90 is so capable and unruffled it's almost contemptuous of you, the driver.

Part of its success in this area is down to the calibration of its numerous propulsion sources into a cohesive, singular entity. You might notice in the handling the effects of the engine and motors operating to different extents, but beyond the engine waking up, there’s never even a ripple when it comes to the delivery of unified power and torque.

You just get crisply responsive, linear force, and the revised eight-speed dual-clutch gearbox is utterly clinical on upshifts, which land with the kind of violent precision that makes them an event in themselves. It’s all this, along with the chassis balance and fine ride, that makes the SF90 an exquisite car on the right road, even if you never use more than half its performance. Or even a third.

Reservations? I have a few. With the front motors, luggage space is very poor and rules out the SF90 for even weekends away. The road-roar at high speeds doesn’t help matters, though avoiding the Assetto Fiorano pack may ameliorate this. Still, if you owned an F8 Tributo alongside your SF90, I suspect you would use the junior model far more often.

Equally, if you’re after the last word in track-day engagement and it has to be a Ferrari, the old 488 Pista is lighter, with a more playful personality and even finer steering. It also costs half what the SF90 does – as does the new Lamborghini Huracán STO, whose V10 is the soulful antidote for both Ferraris’ comparatively dull flat-plane V8s.

There's a sense with the SF90 that you're paying a premium for a technological showcase, and as ever, such cars have their vices and look can seem very questionable value for money compared to the incumbents. With options, this test car costs £523,460. 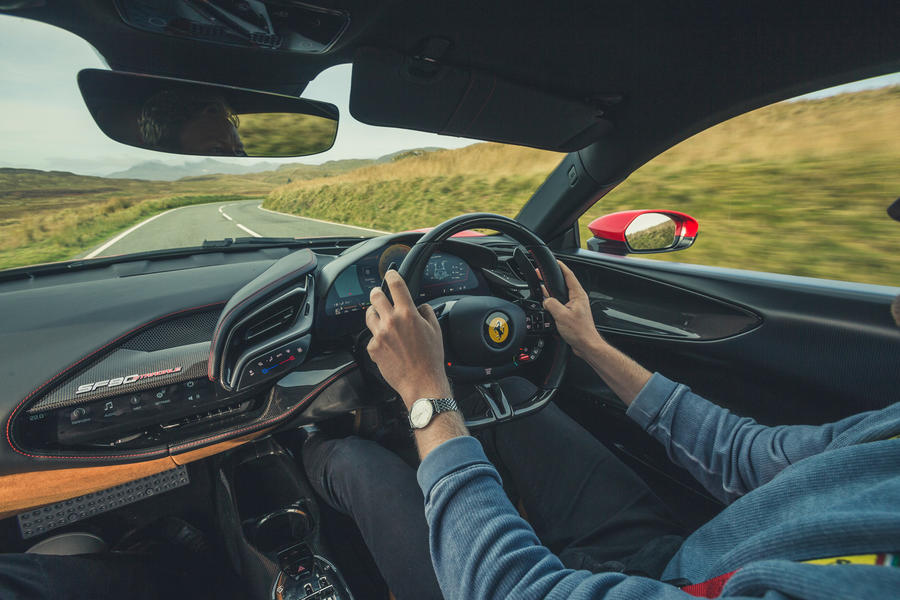 Is the SF90 a car without any real use case, then? Perhaps. And although you could argue that many supercars court that description, this 986bhp plug-in feels more that way inclined than most. For the money being asked, it should be more usable and better-defined, even if there will be no shortage of people willing to pay up for the most powerful and sophisticated Ferrari road car in history.

But details aside, let’s also say that with the SF90 Ferrari has transitioned into the hybrid era spectacularly well. Stronger ergonomics and a less stratospheric asking price will come with future PHEV Ferrari models, but the mastery of complex powertrain elements is arguably of more importance in this day and age, and it’s here the SF90 undoubtedly excels. Has any car ever been quite so unhinged yet somehow reassuring? 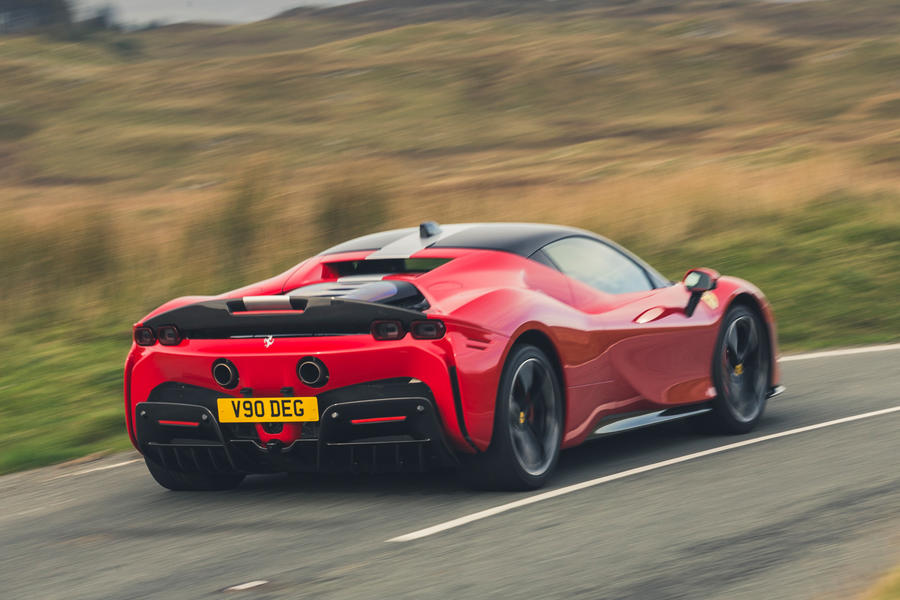 I must congratulate Ferrari's engineers. Must have taken a major effort to design a 986bhp supercar, that can only achieve 211mph! Remember the similarily powerful original Veyron was capable of 250+mph and, the McLaren F1 was capable of 240mph on only 627bhp.

How many owners will actually drive the SF90 on track and, fast enough to exploit the downforce?

Rather have just one Corvette and early retirement financed by the remaining third of million pounds. Ferrari like their F1 team are becoming a rich mans folly littered with mistakes.