7
Share review
DS's first foray into the compact SUV market is the 3 Crossback, where it'll take on the Mini Countryman and Audi Q2. Is DS premium enough?
Open gallery
Close

Several things to consider here: DS as a premium brand, the B-segment SUV as a thing, and the new DS 3 Crossback as the incumbent iteration of both. We might get more questions than answers, but we’ll worry about that later.

And so to the DS 3. I mean the new Crossback, not the old DS 3, the rather charming 3dr hatchback that in its warmer forms is rather good fun, and which plods along on sale for a short while longer. The DS 3 made the crossover (sorry) from being a Citroën to being badged as a DS, but the supermini won’t represent the brand for long, because DS is all about premium.

PSA group, DS’s owner, knows: premium brands account for 11% of all worldwide car sales, it says, but 37% of profits. PSA – Peugeot, Citroen, Vauxhall/Opel, all distinctly not-premium in their various ways – would like a part of that action. And it’s not afraid to say it. It’s perhaps unusual for a company to declare it wants to sell into “70% of the premium profit pool in the world”. I mean, we know it’s all about the money, but you don’t have to remind us.

Anyway, the old DS 3 doesn’t fit very neatly into this profit pool (conventional small cars don’t) but as a small premium SUV thing, the new DS 3 Crossback very much does. The DS 3 Crossback is 4.17m long, 1.79m wide and 1.53m high, and weighs 1280kg, which means it competes with the Audi Q2 and Mini Countryman.

It also means that it’s just 8cm longer and 6cm higher than a Ford Fiesta, yet because it’s a premium SUV the adverts look the same as the ones for perfume and it can cost as much as £35,000, even though it’s only got a 1.2-litre three-cylinder engine. Look, don’t ask me, I don’t make this stuff up.

Anyway, prices start at £21,550 for the 99bhp petrol you won’t buy because every month it’ll cost no less than the 129bhp petrol automatic we’ve tested, which starts at £24,550 (though you can add a couple of grand for the model in the pictures, which has some options on it).

The Crossback sits on PSA group’s new CMP platform, which I believe it’s obligatory to mention will also underpin the new Peugeot 208 and Vauxhall Corsa. The neat thing about CMP is that it’s primed for use with both internal combustion engines, of which the DS 3 has four options in the UK - 99bhp, 129bhp and 153bhp 1.2 petrols and a 99bhp 1.5 diesel – and as a pure battery electric vehicle, which will arrive at the end of this year.

To my ears that suggests there’s inevitably some compromise in the platform,  because with an EV, surely it’s nice to be inventive with where you put the mechanicals to maximise interior space.

But PSA’s logic is that, because both ICE cars and EVs roll down the same production line, it can be flexible about the proportions of each it builds, as the market demands. It’s a rather more pragmatic approach than nailing everything on a new EV platform, and not entirely un-sensible. Powertrain is a choice, then, not a philosophy. 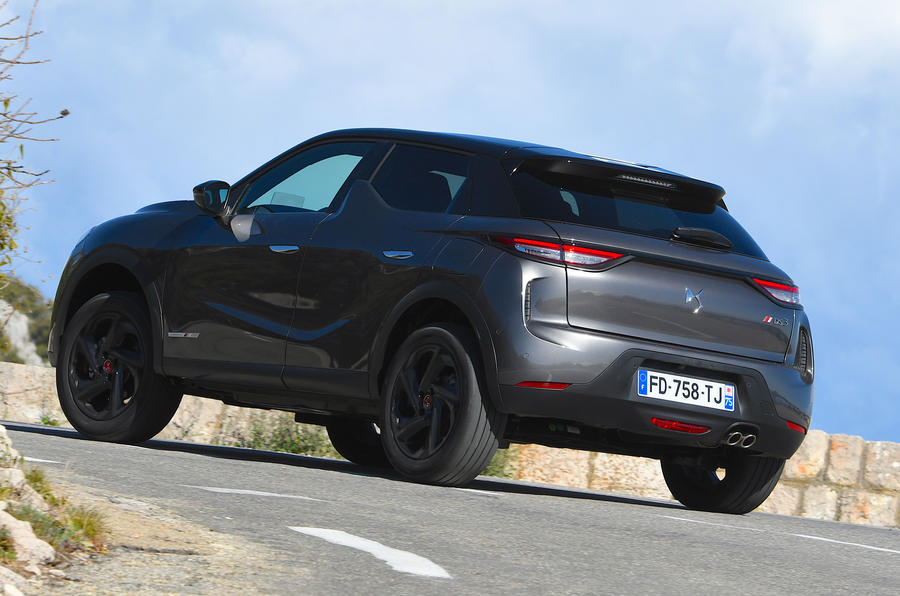 You can make your own mind up about how the DS 3 Crossback looks. You’ll notice it has hidey pop-out door handles but there's nothing unusual about the ‘invisible’ window trims even though they’ll tell you about them. But inside there’s no denying the Crossback’s novelty.

Diamonds are DS’s ‘thing’, the little design icon by which you’ll know the brand. And boy, will you know it – the digital instrument pack, the air vents, the dashboard switches and more all bear the shape, whether it’s ergonomically sensible or not. Often not.

Think fashionable French handbags, though, quilted leather, or perhaps the outside of the Louvre, and you get an idea of where DS is coming from. No bad thing to have a theme, I suppose. And when most of the materials are as nice as the dashboard and door tops – always soft, says DS – no bad thing at all. Apparently you get used to where the switches are, say DS’s engineers, with what I wondered was a hint of resignation. But it’s interesting to look at and feel, that’s the main thing.

The driving position is fine and there’s plenty of room in the front, on some new chair foams they banged on about, which seemed an improvement on the PSA norm, but which I’d want to spend more time sitting on before saying so for sure.

The B-pillar was into my over-shoulder vision and things are more cramped in the rear, where the window line – higher at the front than the back – is odd and quite high, so if you’ve got claustrophobic kids, make sure they won’t vom. The boot, whether on fossil or EV power, is 350 litres; 50 and 100 litres less, respectively, than an Audi Q2 or Mini Countryman’s. Maybe all of these things are ingrained CMP compromises, maybe not. I suppose we’ll see.

And to drive? If you’re buying a B-segment SUV let’s not pretend you care all that much, but actually the Crossback is not bad. DS wants comfort but not Citroen-style floaty comfort. It wants response but not Peugeot-style tiny steering wheel response. And unlike Audi, which has a fascination with big wheels and sportiness, and Mini, which wants to make everything feel karty whether it should or not, DS has let the Crossback be its own thing. It steers moderately well, road noise is quiet and the nice thing is that, on 18in wheels, the largest available, the tyres still have 55 profile sidewalls, so the ride’s relatively pliant.

The 1.2-litre three-cylinder turbo engine is quiet, and the eight-speed auto smooth in unhurried driving. There are eco, normal and sport drive modes, but eco is like driving in treacle and, while sport is happy to kick down gears, it won’t necessarily do it when you want, so you’re better off using the column-mounted shift paddles.

We’ve also had a (very) quick go in the pre-production E-Tense, the pure 132bhp battery electric DS 3 Crossback which might just sneak into showrooms before the end of the year. The battery pack sits in an H below the front and rear seats and along a ‘transmission’ tunnel between the two, with the motor and inverter and control unit under the bonnet.

With enough capacity for a 200-mile range, that turns the E-Tense into a 1545kg Crossback, which has its penalty on dynamism, but it’s a smooth (obviously) and responsive drive. There are dynamic tweaks still to make, but it otherwise feels like a well-finished thing. 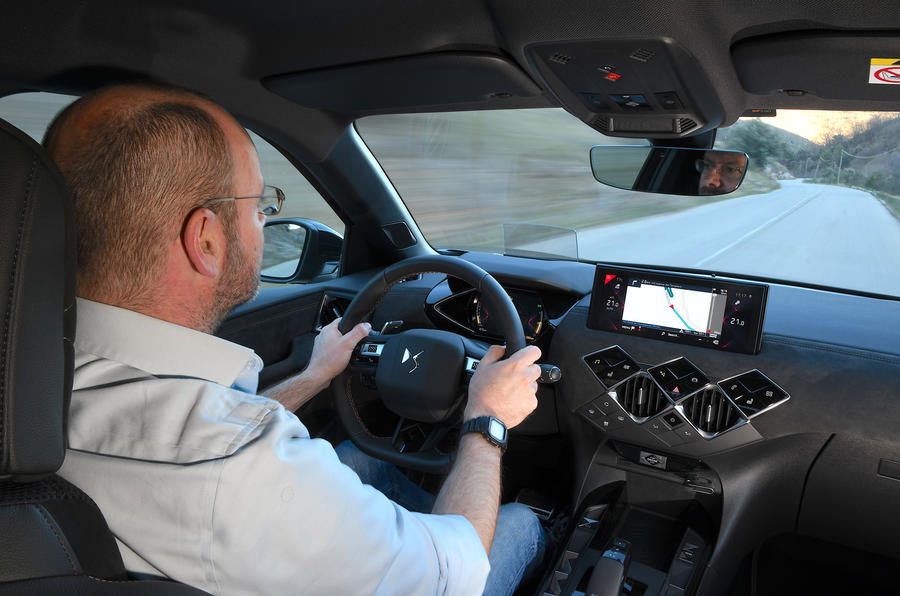 I don’t know. It seems like a lot of money to me for a tall version of a compact car, but then I think I once said the same about the Nissan Qashqai, so what do I know?

But whether the B-segment SUV is here to stay or whether we’ll one day remember it with all the fondness of the small coupé-cabriolet, the Crossback is competitive.

What I like about it is that it has its own identity – there are sufficient design differences inside that it does feel removed from Peugeot/Citroen norms despite shared components. And while some of the ergonomics are iffy and plastics shiny, so too are some quite classy.

Even DS will admit that French manufacturers have had trouble convincing people, in the past, of their premium credentials. That the Crossback competes with an Audi says as much about to where the big German brands have put themselves, as where DS is stretching itself.

The line between mainstream and premium has never looked so faint, and it’s not just aspirational brands like DS who have things to gain or lose by stepping over it. 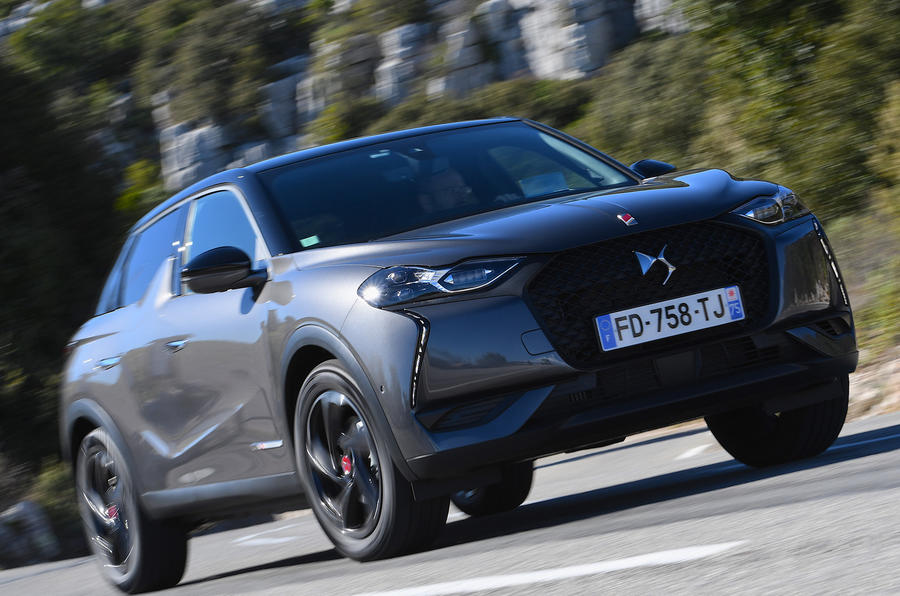 I like anything different and new. I do quite like the way this looks though the diamond patterns on the interior look a bit Amstrad. My problem with this is that it's all surface style and no depth of engineering or fundamentally clever thinking. It's like a flash kitchen with chipboard inner frames. What made the 1955 DS so amazing was how they rethought the idea of what a car was from the ground up and the inside out. Too many cars now wrap fancy styling around a standard platform and the packaging suffers. What's the point of a car when it doesn't properly accommodate 4/5 tall people and their luggage as a basic minimum. Why wouldn't you start with that requirement?

I like anything different and new. I do quite like the way this looks though the diamond patterns on the interior look a bit Amstrad. My problem with this is that it's all surface style and no depth of engineering or fundamentally clever thinking. It's like a flash kitchen with chipboard inner frames. What made the 1955 DS so amazing was how they rethought the idea of what a car was from the ground up and the inside out. Too many cars now wrap fancy styling around a standard platform and the packaging suffers. What's the point of a car when it doesn't properly accommodate 4/5 tall people and their luggage as a basic minimum. Why wouldn't you start with that requirement?

First of all, many cars - through all segments - will not be able to accomodate 4/5 TALL people. If that would be the case, the streets would be filled with Berlingo's. Ever seen 5 TALL folks in an Up!, CLS, Yaris, Bimmer 3, Astra??

Secondly, what has 60 year old DS which brought Citroen at the brink of extinction to do with this Different Spirit 3 Crossback? Nothing.

Thirdly, these days, all cars are well engineered. The differentiator is in the packaging.

I don't get why people are

I don't get why people are going on about it being small in the back etc. This is a replacement for the 3-door DS3, it's already bigger than that. There are lots of single/couples whom will buy this. Not every car has to be designed to take a family.

Personally, I have an issue with the lack of more powerful engines. 99bhp entry level doesn't seem very premium to me.

What a tart's handbag of a car. Nostalgia can be tiresome but i miss the truly idiosyncratic cars they used to make, my CX Prestige, the XM my dad had. My first car bought with my own hard earned money was an AX 1.1 RE 4 speed for £1,500 - i loved it. So much character and fun to drive. No Citroen or Fiat i have had has ever let me down, despite their reputations.