From £19,9357
Refreshed and more customisable supermini feels bigger than it looks, which doesn’t always work in its favour
Open gallery
Close

You will have noticed that the new Citroën C4 family hatchback - for all its bold design cues and nods to models of yore - does away with the protective and distinctive Airbumps that adorned its C4 Cactus predecessor.

By CEO Vincent Cobée’s own admission, that’s in part due to an acknowledgement that Citroën’s designers “probably were a bit carried away with our innovation capabilities” when designing that crossover-cum-hatchback.

Bad news for bump lovers everywhere, then. But there is salvation to be found in the form of the Citroen C3 supermini, which has made it through the mid-life facelift wringer relatively unscathed and is now said to be Citroën’s “most customisable car”.

So the quirky plastic door protectors remain, and buyers can now paint the car in a whopping 97 colour combinations, up from a trifling 36 before. There are also new wheel designs, extra coloured inserts and interior trim packages to consider.

It’s all part of Citroën’s Inspired by You marketing strategy, through which the brand is significantly enhancing its personalisation options just as several of its main rivals - including Ford, Renault and Seat - begin to streamline their offerings in the name of simplifying the buying process and cutting manufacturing costs.

The C3 gets a subtly redesigned front end, too, claimed to be inspired by the radical Cxperience concept from 2016, with a new chrome grille surround and subtly reshaped headlight clusters.

The engine line-up is unchanged, comprising two 1.2-litre turbo petrol options - one with 82bhp and the other 108bhp - and a 99bhp 1.5-litre diesel. The C3 also continues to offer five- and six-speed manual gearboxes, while gaining a new six-speed automatic for the more powerful petrol engine.

Three trim levels are available: Feel, Flair and Flair Plus. All cars are equipped with LED headlights as standard, along with automatic air conditioning, cruise control, a 7.0in infotainment touchscreen and a DAB radio as standard, but top-rung models gain add-ons including a reversing camera, sat-nav, rear privacy glass and 17in alloys. 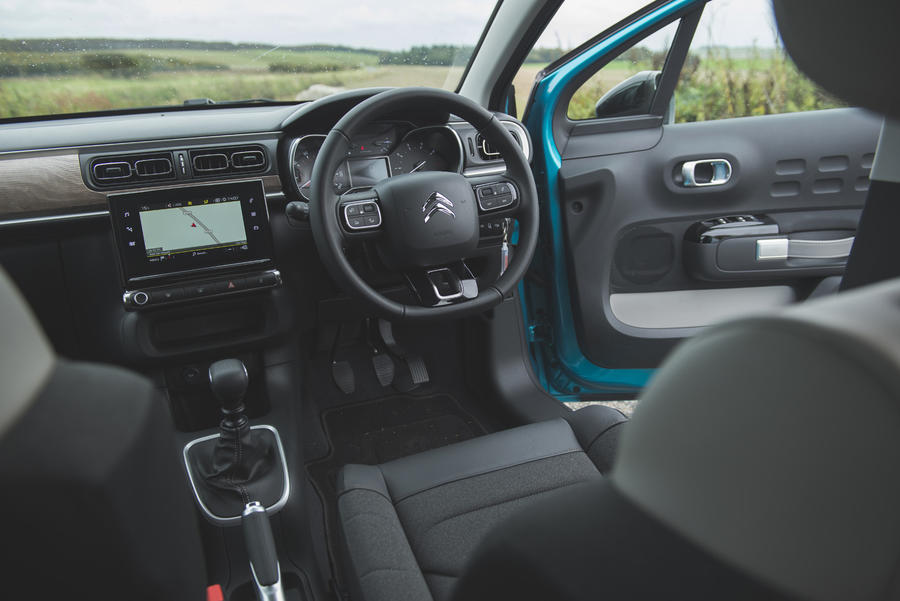 The C3 certainly doesn’t look like anything else in its segment. Chunky wheel arches and the aforementioned side trim panels inject a hint of crossover into its make-up, while a plethora of recessed oblongs - more than vaguely reminiscent of a paracetamol packet - bring artistic flourishes to a cabin that’s nowhere near as drab as that of the Ford Fiesta or Volkswagen Polo.

Our car was specified in range-topping Flair Plus trim so gained a brightly coloured teak-esque (they call it Techwood) finish to the dashboard, as well as fetching tri-tone Advanced Comfort seats.

Comfy it is, too. The C3 manages to feel quite a bit larger inside than the bulk of its contemporaries - even including the Vauxhall Corsa, with which it shares its engine line-up and most of its switchgear - thanks to neat touches like unobtrusive leather pull-straps for the doors and reduced physical controls.

The infotainment system, familiar from other PSA Group models in its layout but with a clean and clear Citroën frontage applied, is simple to use, responds quickly to inputs and can be used on the move without distracting - a common pitfall of predominantly touch-based control panels.

However, the rear seats are far from class-leading in terms of leg room and the boot, while large enough, has a high load lip so is a pain to fill with larger and heavier items. Admittedly, the C3’s billing as an urban-oriented runaround means it won’t often be filled to capacity for extended journeys, but when the Honda Jazz can a comparatively dizzying array of rear seat layouts and loadbay shapes in a similarly sized package, it’s certainly a point to consider.

So, a case of form over function, then? Well, Citroën certainly sees its supermini as sufficiently up-to-date, leaving its mechanicals untouched and offering no indication as to when we might see electrified variants (the C3 doesn’t sit atop the same EV-compatible architecture as its Vauxhall and Peugeot siblings so won’t make the switch until its next generation), but the driving experience fails to make good on the connotations of modernity and refinement exuded by the car’s styling. 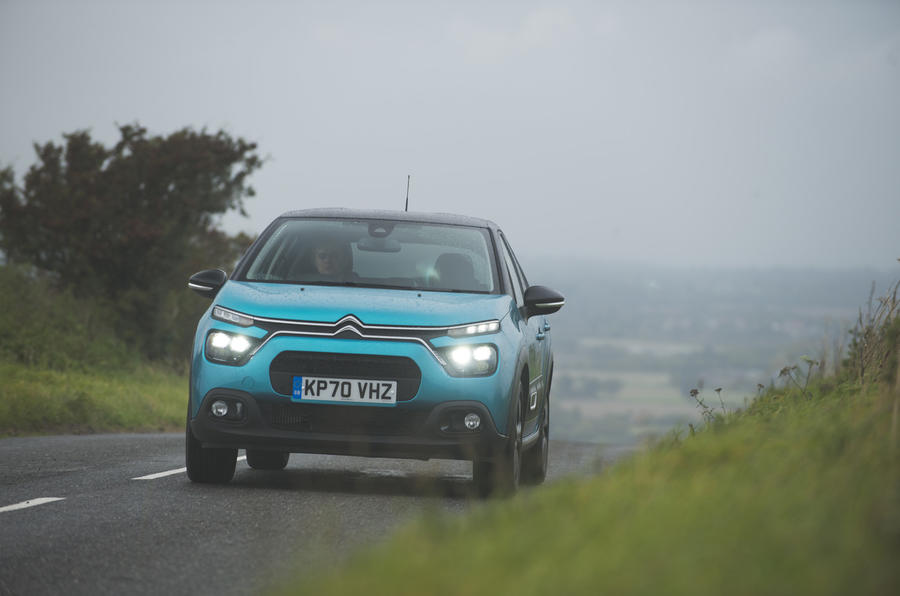 The engine - in this case the top-rung, three Puretech 110 petrol with 108bhp and 151lb ft - is strong from launch and rev-happy on the move, but can feel strained on steep hills and when you're overtaking. Our test car’s gearbox, happily, was the six-speed manual, rather than the often-languid six-speed auto. However this can feel vague and unsatisfying to operate in a hurry and is operated using a cube-like shifter, which is a shame – not least because a slick transmission would really enhance the car’s urban appeal.

But the real problem with the C3 stems from one of Citroën's historic strengths: ride quality. The Progressive Hydraulic Cushions of the C5 Aircross and new C4 - and more rudimentary but similarly conceived systems in their CX, BX and DS forebears - have lent the French firm a degree of untouchability when it comes to rolling refinement, ironing out all but the most gaping of chasms in the road and absorbing with minimal complaint the harshest bumps. The little C3 isn’t equipped with such complicated chassis trickery, but you do sense that its makers have attempted to imbue it with the same sort of floaty gait.

There’s an unwelcome bounciness to the ride over undulating asphalt, which can make the suspension feel rather underdamped, and take a corner at speed and you will feel body roll far more dramatic than anything else in this segment.

Couple that with an unexpectedly quick-reacting steering rack and you arrive at the conclusion that, curiously, the C3’s turn-in response is rather better than it should be. You can throw it into a bend as furiously as you like with little fear that you will veer off course, but the ensuing wobble will be enough to put you off trying it a second time. It’s no modern-day reincarnation of the hilarious 2CV, of course, but a car this small should lend itself quite readily to dynamic finesse.

Citroën’s trademark ‘magic carpet’ ride works well in a big saloon - the likes of which we sadly don’t see these days - but doesn’t quite translate to a vehicle that won’t be often pressed into service for long motorway jaunts.

Not that the C3 is a city-slicking one-trick pony. The 1.2-litre engine pulls nicely up to 70mph and, once there, fades unobtrusively into the background, returning a pleasing - if not awe-inspiring - mid-40s MPG read-out if you’re sensible.

There’s a little bit of wind noise and tyre roar to contend with, but these are small flies in the ointment when considered alongside the supremely comfortable seats, competent sound system and airy greenhouse, which are among the C3’s more appreciable ‘big Citroën’-inspired characteristics. 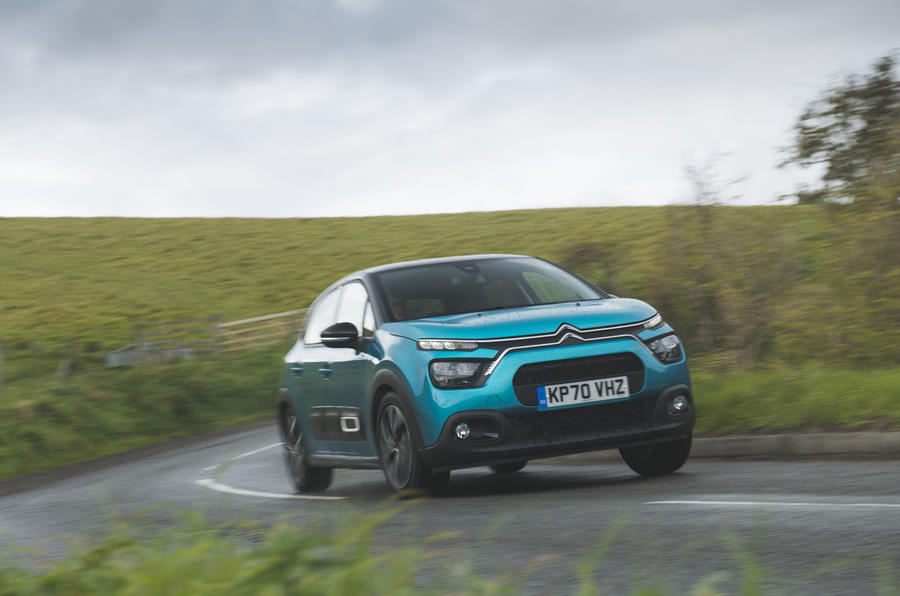 When everybody tries to stand out, nobody does - or so the saying goes. So it’s reassuring that Citroën can still trade on the quirkiness and individuality that has historically set its models apart. There’s no denying that the C3 is a cheerful and likeable car with bags of character, and the enhanced personalisation options brought by this latest round of updates will only strengthen its appeal for buyers who fancy something “a bit different”.

The compromise, of course, is that different doesn’t always mean better, and there are better-handling, more efficient and punchier superminis. This will matter more to some than others, of course, and the C3 goes some way to compensating for its dynamic failings with impressive levels of comfort and refinement, but a lot of its best qualities can be found in slightly bigger cars. It’s definitely the fashionable choice, but not many will see it as the sensible one. 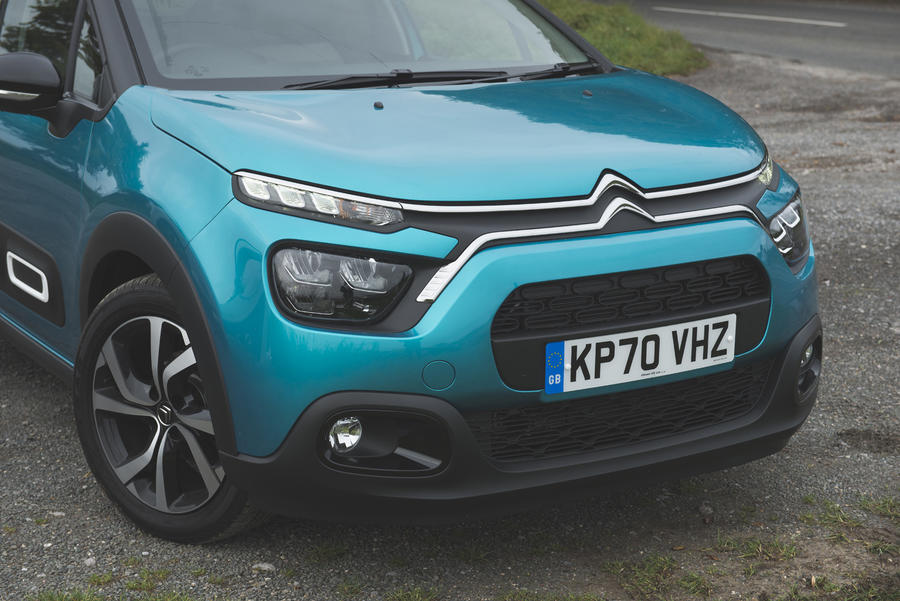 ..... on the European market after the latest Fiesta and Polo became available. In fact, these two already saw their sales volume drop in only their 2nd year where the C3, a year older, kept its ranking. Undisputed leader of the B-segment was/is/remains the fabulous allrounder Renault Clio, chased by the mighty 208 and Corsa. The latter leads the sales charts in the UK, and ranks #2 in Germany. No mean feat.

Likable looking car.  Marches to its own drumbeat compared with everything else (anti-sporty).  Don't like the squinty new chrome features at the front which looks like it's a new Citroen signature, which means it will be around for at least the next 5 years (sadly).

Always liked this car since

Always liked this car since it was launched. I took a friend shopping for a replacment to her Fiat 500. She loved this when I showed it to her and she bought one. Well specced, looks funky, and is very comfortable to drive. She loves it