From £74,2657
Vaster than our road networks need, but undeniably capacious and finely furnished with it. Brisk and defter than most seven-seaters but no sports SUV
Open gallery
Close

This is probably the most regional car BMW has designed.

Its big-grilled largeness is aimed at buyers in America, the Middle East, China and other Asian markets, and judging by the enthusiasm with which it was viewed by colleagues from Dubai, it looks as if BMW may have hit the target.

These buyers are offered a version with a petrol V8 that we won’t get, its twin exhausting spitting dune-assaulting promise even at idle.

European buyers, who will need to think hard about where they might park this seven-seater before committing, can choose between the 335bhp inline 6 xDrive 40i sampled here, a 192bhp xDrive30d or a 290bhp M50d.

The X7 shares the recently renewed BMW X5’s platform, but it’s substantially bigger than that car, occupying a footprint 5.15m long and 2.0m wide less door mirrors. The X5 shares the same width, but come in at 4.92m long and 1.75m high, the taller X7 topping 1.81m, which certainly contributes to the idea that you’re driving a gargantuan beast. So does looking over your shoulder towards the distant tailgate. 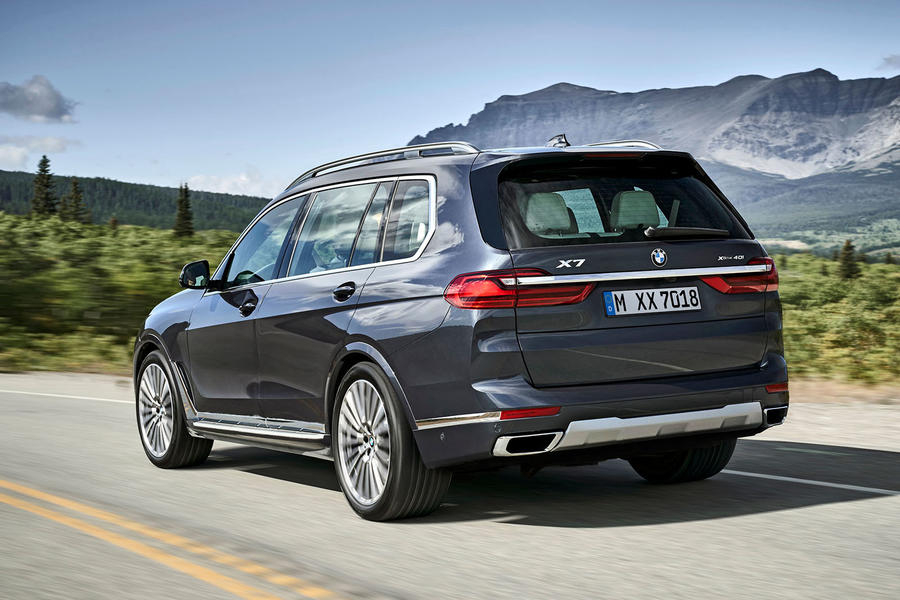 But that, of course, is the point of this car. It’s big enough to seat five in absolute comfort, and even those banished to the back will find a lot more space than usual once installed.

They’ll need flexible bodies, though, because getting past the forward edge of the wheelarch requires dexterous effort.

The boot is bigger than you’ll find behind the third row of seats some seven-seaters, but for truly usable space you can drop both rows to uncover 2121 litres of finely upholstered goods tray.

Fine upholstery there and everywhere else is a pleasingly unmissable feature of the X7, this being the latest of BMW’s luxury range whose stablemates include the 7 and 8 Series, all identified under the Bayerische Motoren Werke label.

Such is the surface area of seat trim that the choice of material and trim can have a dramatic effect on the cabin ambience, as can the option of the vast glass roof, which part-opens.

The impact of the X7’s interior will be as nothing compared to the business of conducting it down a road if you have never driven a vehicle of this scale before. You’re sitting high and the rear window is a long way off, but it’s the X7’s width and the initial feeling of bulk that can intimidate. Even on American Interstates the lane-keeping assistance will be kept busy if you don’t concentrate on herding it between lanes.

That’s not because it’s a wanderer, but simply because it occupies a sizeable chunk of said lane. This is a car in which lane-keeping is a real benefit, as is its semi-autonomous ability to edge ahead in traffic jams unprompted, by harnessing the radar-governed cruise control.

Motorways are likely to be a primary habitat for X7s, and it’s hard to imagine anyone flinging one about with BMW sports cars in mind. Despite this, BMW’s chassis engineers have aimed to deliver a driver’s car, its BMW X5 roots helping.

The scope for bold cornering in Florida, this test drive’s ultimate destination, is limited but a quiet roundabout revealed a fair bit of well-controlled roll in comfort, less of the same in sport and more gainliness than you might expect of from a vehicle the size of a decently voluminous van. Its air suspension can turn the ride a bit bouncy over deeper dips, but you can slice through long sweepers with a verve that Starbucks-swilling back-benchers will find distinctly unamusing.

The 40i X7 is not hugely quick, which is no surprise given its bulk. But it’s less hefty on its wheels than you might expect with 2320kg to cart, all all-out assault on 62mph completed in 6.1sec. The inline-six is whirringly smooth at low to middling revs, forays towards the red danger paint turning it a little strained-sounding. The eight-speed transmission ensures you rarely stray there, though, unless you paddle or nail the throttle, especially as it downshifts willingly. 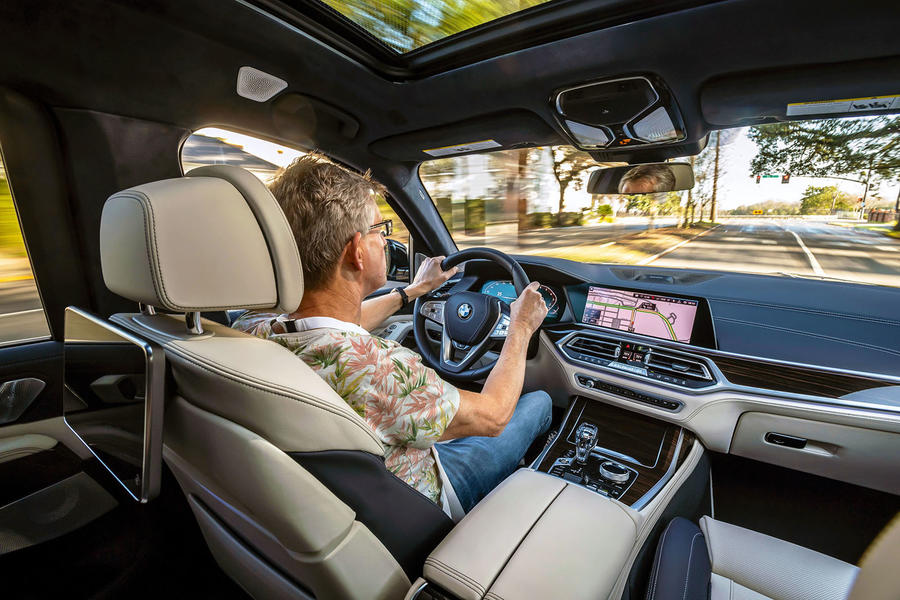 Judged against its distant-markets mission of carrying plenty in luxury and with lightly glitzy presence, the X7 does its job well.

It’s far from the most elegant or imaginatively designed BMW and it’s really too big for many British roads (and car parks) but if you need that much sumptuously-presented space, then shortlist it. 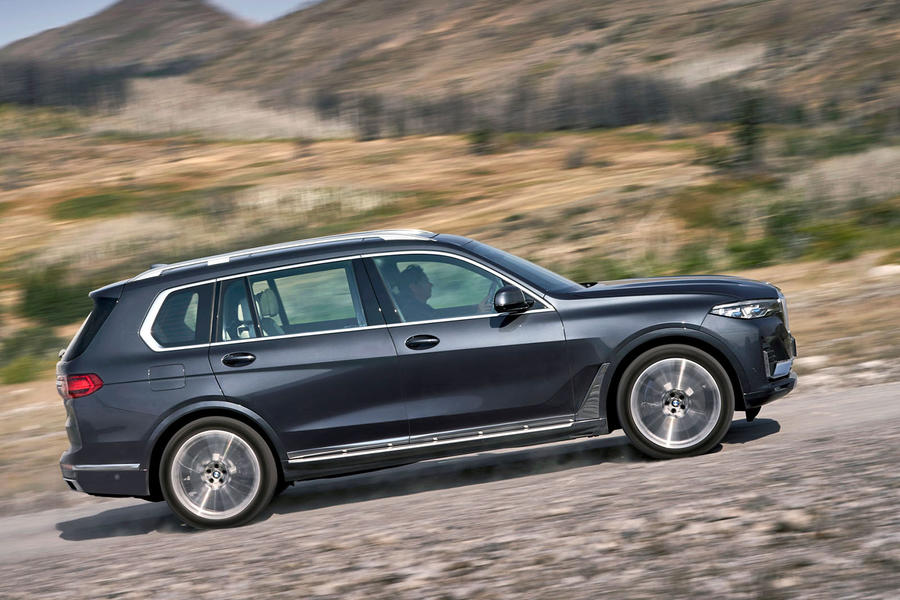 Is “vaster” actually a real word?  If it is I apologise but part of me can’t help but think Messrs Bulgin and Setright would be spinning in their graves at this point.

The car is big but no longer than a VW transporter and only a little wider.

Concentrate to keep it in

Concentrate to keep it in lane on US freeways?  Rely on lane-keeping assistance?  Have you seen the size of a US big rig?  My Chevy Silverado is substantially bigger than the X7 and it doesn't get smaller when I am towing an 8 ft wide horse trailer, yet that's no problem at all.  But on visits to England I have struggled to park medium sized hatchbacks in Liliputian supermarket car parks, and then you have to get out the door!  And someone has put a fricking pillar right there.  Sometimes I think the whole country was built by British Leyland.

... on visits to England I have struggled to park medium sized hatchbacks in Liliputian supermarket car parks, and then you have to get out the door!  And someone has put a fricking pillar right there.  Sometimes I think the whole country was built by British Leyland.

You're absolutely right. If British motoring hacks spent half as much time campaigning for decent roads and associated infrastructure as they spend trotting out hackneyed cliches about "gargantuan beasts", then our benighted country would be a much easier place to get around.

I can't get out of the car in a Sainsbury's car park and I've only got an X-Trail, that's why I go to Aldi.