From £120,9707
Share review
Removing the roof from BMW's performance GT widens its fun factor, but no compromise is made for comfort
Share
Open gallery
Close

This is the most expensive version of BMW’s most expensive car, the four-seat, drop-top M8 Competition packing 616bhp, the potential for a startlingly fast 3.4sec romp to 62mph and if you order the M Driver’s Package, a derestricted engine management system allowing a top speed of 190mph.

That figure probably lessens slightly with the generously insulated fabric roof folded below deck, but would feel at least as dramatic.

The M8 Competition shares many core ingredients with the M5 Competition, but there are plenty of chassis sharpening tweaks too. These include a 7mm lower ride height, a wider track, stiffened engine mountings (for sharper turn-in) and extra bracing of the front and rear subframes, these building on an already substantial arsenal of dynamic hardware which includes four-wheel drive, an electronically governed mechanical limited slip differential, traction control, ESP and a quartet of 20in Michelins, the rears fractionally plumper than the fronts.

That’s because larger slugs of torque can be directed rearwards depending on driving mode, the ultimate of these, rather thrillingly, turning the M8 into a pure rear-wheel drive machine, as with the M5. 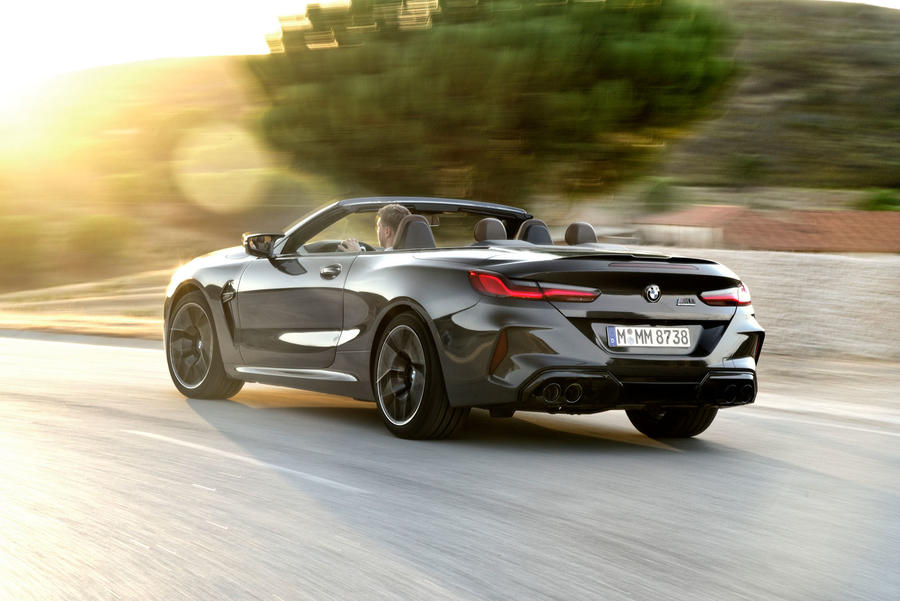 Apart from the sumptuous, quilted leather upholstery, what’s likely to strike a driver first is the apparent complexity of driving this drop-top missile.

Above the busily buttoned steering wheel spokes is a pair of red anodised levers cryptically marked “M1” and “M2”, while a crowded centre console presents buttons marked “M Mode” and “Set Up”, the third bearing a twin exhaust symbol. The role of the last of these is more obvious, but the others are less explicit. And the glass-capped gearlever knob’s pattern will require thought if you’re unfamiliar, too.

Prodding the starter soon reminds you of the M8’s core promise however, its quartet of exhausts issuing a low, blaring roar highly suggestive of power. A long, empty road and a deep-sunk throttle will immediately and emphatically confirm this car’s massive pace, committed braking the effectiveness of a by-wire system that has plenty to do with no less than 2010kg to slow.

Despite such heft this open top M8 can dart about with grippy aplomb, although you’re unlikely to forget that you’re riding aboard a big car unless you’re indulging the wide surfaces of a track.

As a track drive in the slightly lighter, more rigid M8 Competition Coupe reveals, a smooth-surfaced track is where this king-size M-car excels. Especially if the bends are long, fast sweepers, which it surges through with thrilling authority and huge speed. It can handle tighter turns with more deftness than its mass might suggest, especially if you marshall its fat 553lb ft of torque with respect for your rubber.

Once the moment of maximum direction-changing has passed, this convertible will depart a bend like you’re escaping a fire, the extra pulling power of its front wheels speeding your arrival at the next turn. Wondering what this big V8 might be like if it were rear-wheel drive?

Then select the innocuously labeled M-Dynamic mode, and all torque to the front wheels will be staunched in favour of rear tyres that will also turn freed of any electronic controls.

The result is an extra-exciting track drive that will certainly test your car-handling skills given the resulting excess of power over grip, although the BMW will slide its rear end with reassuringly predictable grace. Poise, measured roll and precise steering all make this car easier to tame than its vital statistics might. In time, you’ll find your favourite settings for all its sub-systems, these rapidly accessed via those “M1” and “M2” toggles.

The poise you enjoy on the track is less easy to experience on the road. This ferociously fast car needs to be travelling at often inadvisable speeds for its capabilities to be uncovered, and it is not a small vehicle either. More than that, lumps, bumps, crests and heaves it sometimes attacks rather abruptly, and occasionally with a slightly under-damped post-intrusion flop.

This, and the fact that this is a convertible, tends to encourage a more relaxed approach to your journeying, which at least provides a moment to savour the exhaust’s roar and rumble. You’ll also realise that the M8’s elegant fabric top, which needs 15seconds to render itself invisible, caps a body remarkably free of flexing shudders.

But it also has you questioning the need for a 616bhp convertible, a lesser output likely to provide almost as much entertainment. 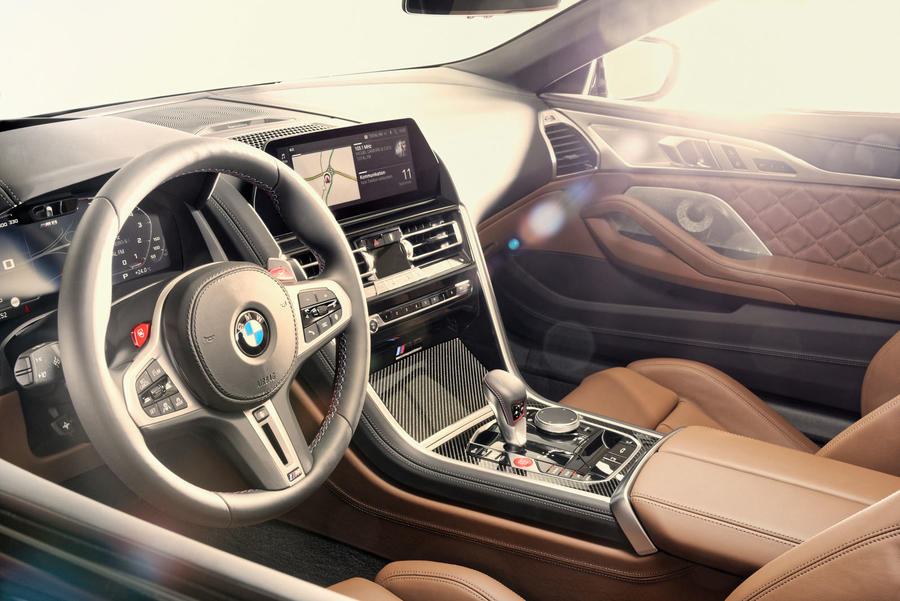 These issues can be pondered in pretty lush surroundings and from very comfortable seats (up front – the legs of those in the rear can move little more than a statue’s) that face a well-stocked, digitally rich dashboard. Functionally, there’s little you’ll want for.

So, that old question – does it make sense to weaken the body structure and add weight to a finely honed, high-performance driver’s car? There’s no question that this compromises performance, but then there’s plenty of this to be chipped away at, and a removable roof undeniably widens this car’s pleasure-providing potential.

In this case, though, the M8 Competition’s sometimes abrupt ride is still more of a compromise, and has you thinking that if it’s a rapid convertible that you want, the experience would be better enjoyed aboard a car more softly sprung, such as a less potent 8 Series. But you lose very little of the M8 Competition coupe’s capabilities as a convertible, and if you can live with its size and the ride, the al fresco facility will only add to the experience for keen drivers. 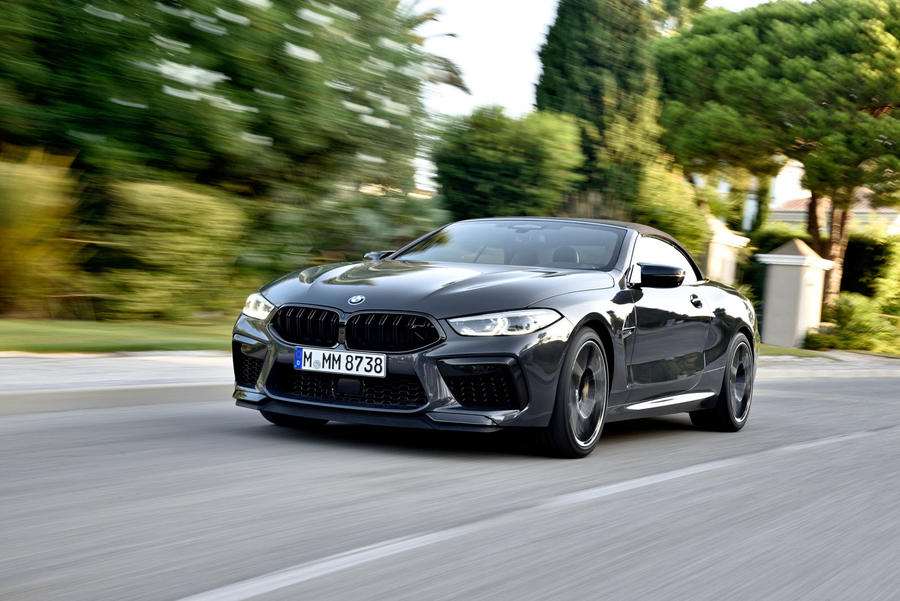 I would actually be interested in some comments on THE CAR

you really do need to find a way to weed out the pointless spam from either bots on knuckle dragging halfwits that are cluttering up the comment sections of your site. As for the BMW M8 convertible, I like the concept of an elegant powerful BMW convertible but this seems to be excess of power for a car to be enjoyed roof down on continental touring.