From £35,8359
Share review
Diesel estate remains a wonderful place to spend time in every respect, even if it could be a bit quicker
Share
Open gallery
Close

If there’s one thing that the BMW 5 Series has become particularly adept at over the course of its nearly 50-year existence, it’s the ability to make the wider car world collectively sit up and pay attention.

Upon its arrival back in early 2017, the seventh-generation, G30 version of Munich’s venerable executive car wasted no time in catapulting itself to the top of the class, with its mixture of driver engagement, luxurious refinement and efficient performance helping it maintain a vice-like grip on that position since.

Now, in a bid to grow its advantage and stave off the heightened threat posed by updated offerings from Audi and Mercedes-Benz, the 5 Series has been facelifted. Cosmetically, it has been sharpened up with new light and grille designs, but the crucial changes here are an expansion of the plug-in hybrid range and the introduction of 48V mild-hybrid technology on all four- and six-cylinder engines.

That said, the bread-and-butter 520d was the one 5 Series variant to benefit from the addition of an integrated starter-generator set-up last year, and here we’re driving it in the UK in newly facelifted, Touring estate guise for the first time.

The 2.0-litre four-cylinder B47 diesel engine is effectively the same as it was when the G30 5 Series was launched some three years ago. It continues to make a modest 187bhp and 295lb ft, all of which is delivered to the rear wheels through an eight-speed automatic gearbox. However, its 48V architecture now provides an additional 11bhp of electrical assistance, which should aid responsiveness when you need to get your foot down.

Like all mild-hybrid systems, this allows the engine to switch off while coasting and can help to spur the diesel engine along when you’re driving at a relatively consistent rate of knots. All of this, unsurprisingly, has been implemented in the name of marginal efficiency gains, but the big pay-off is that the 520d is now RDE2- compliant, so it isn’t hit by the 4% benefit-in-kind tax diesel surcharge.

Still, to any savvy fleet manager or business buyer, a BIK rating of 32% won’t be quite as tempting as the circa-10% scores the latest generation of plug-in hybrids are able to achieve. But for those private buyers after a big, efficient family estate, there’s very little about the way the 520d drives that’s likely to disappoint. 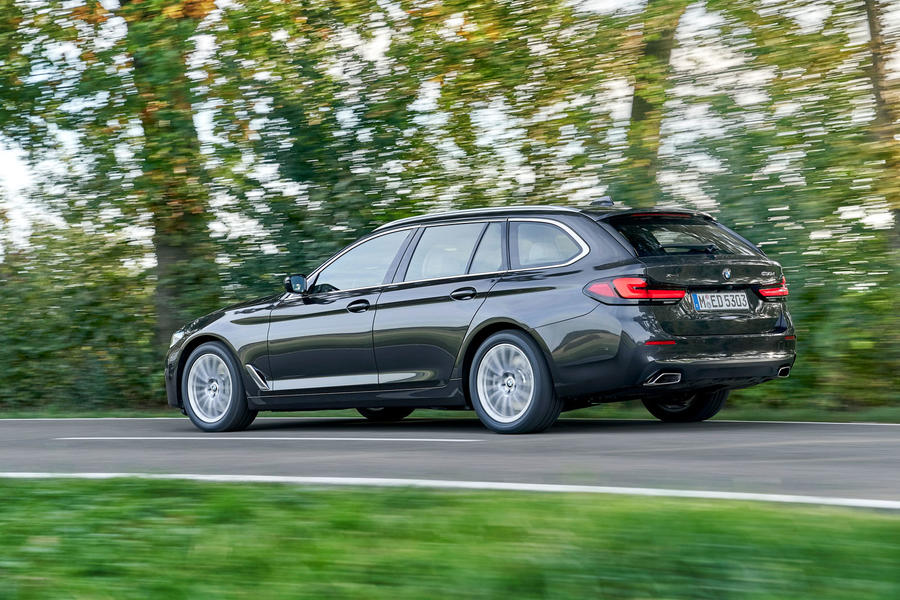 Throttle response has been minutely sharpened by the presence of the integrated starter-generator, but I’m not sure the big 5 Series was ever really lacking in this department anyway. The gearbox always seems to be in the optimum ratio, and on those exceptionally rare occasions when you do happen to catch it off guard, a prod of your right foot will make it quickly slot the optimum gear home with the slickness of greased silk.

The engine itself lends the 5 Series a decent turn of pace, with a punchy mid-range that’s potent enough to provide a heightened level of enjoyment when the road ahead is clear of traffic. That said, with a 0-62mph time of 7.6sec, outright acceleration isn’t exactly red-hot.

The 520d certainly feels quick enough to keep pace with its rivals, but you don’t find yourself making the most of short stretches of clear road if you find yourself stuck behind slow-moving traffic. It’s impressively efficient, mind, and refinement is particularly excellent.

On passively damped, lowered M Sport suspension and 20in alloys, the 520d rides and handles remarkably, too. Drive fast and it displays an impressively athletic resistance to float and roll, keeping its body movements closely in check over rolling stretches of asphalt and through faster, sharper corners.

Its steering lacks the leaden sense of weight that you find in the likes of the Audi A6, but it nonetheless steers with accuracy and conviction, with its comparatively lighter rack contributing to a heightened sense of natural agility. Grip levels are very good, and it adopts a wonderfully neutral stance through bends.

While it showcases excellent pliancy over rolling stretches of road, there is a distant business to the ride that’s ever present on less well-kept country roads. Larger ridges and ruts can send a bit of a jolt into the cabin, but neither the force nor the volume of such impacts is troublesome enough to put you off the idea of opting for an M Sport.

It would, however, be instructive to see how the 520d rides on adaptive dampers and a smaller wheel size. My guess is that it would be utterly magnificent. 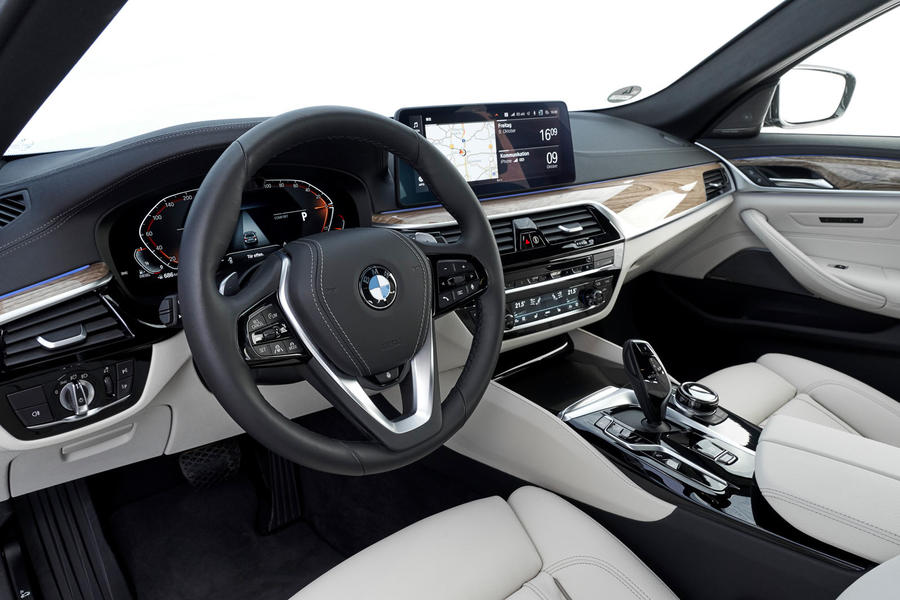 The 520d Touring M Sport costs from £46,050, so there’s very little daylight between it and similarly sportified, four-cylinder versions of the A6 and Mercedes E-Class.

It’s still the best to drive, still has the nicest cabin and so is still the pick of the bunch. And with that massive boot, there’s a very real argument that it’s still all the car you could ever need. 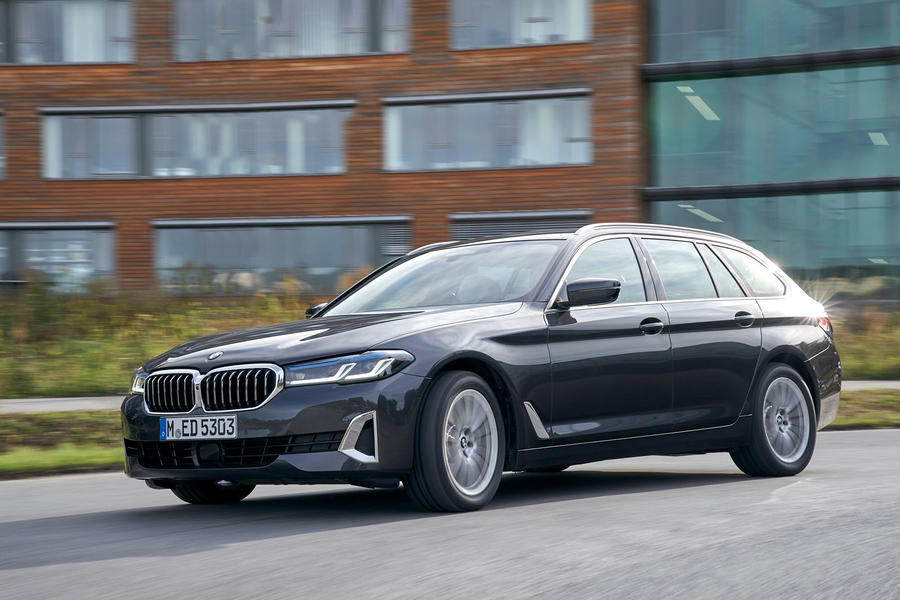 Why are you on autocar.co.uk? If you are interested in the reliability, running costs, boot litres etc... then head to whatcar.co.uk. Autocar is for people who want to know how a car will accelerate, turn and brake. The Skoda Octavia could not possibly be any more What Car if it tried. I drove one and hated it. I drove a 5er and loved it. I am willing to pay a premium for the attributes that matter to me but part of me is jealous of your indifference to them, it would save me a fortune. Horses for courses, so don't hate on the premium marks just because they're premium, enjoy your dull and practical, cheap and lifeless Skoda in peace :)

You 100% are reading the comments of that I'm sure.
I'd even bet by quoting, "it could be a bit quicker" you knew you'd get a reaction. Not from me!
Great performance from a 2ltr diesel says I.
Deputy 20 October 2020

Because when you arrive in Bristol in your brand new Euro6 diesel you'll be forced to take public transport as your car is soooooo filthy but your friend in her classic MG can drive straight in spewing out as much gunk as she likes as it's a petrol so therefore must be cleaner.  (Muppet local governments who want to ban a technology rather than introduce a particulate limit,at least global standards understand it's about limiting emissions rather than banning one fuel outright but that level of intelligence is not available in local councils....)