From £29,7008
Share review
BMW’s divisive new 4 Series Coupé has landed in the UK. We put it to the test in entry-level petrol guise
Share
Open gallery
Close

If you’re looking for an entry point to the latest BMW 4 Series Coupé line-up, this here 420i M Sport is it.

You will, of course, have by now formed your own opinion about the styling of Munich’s latest two-door. Based on what I’ve read in various online comment sections, it would seem that there are a few people out there who don’t mind the way it looks, and I salute those individuals brave enough to actually stick their heads above the parapet and fess up to fancying its fanged face.

Whatever floats your boat, I guess. But for what it’s worth, I think it looks as though design chief Domagoj Dukec had a Predator for a muse. “Draw me like one of your German grilles,” it said, while reclining on a chaise lounge. Probably.

Anyway, the 420i M Sport Coupé starts at £39,870 and is expected to be the best-selling 4 Series variant here in the UK. Power comes from BMW’s B48 powerplant, and in this application the turbocharged 2.0-litre four-cylinder petrol engine develops a modest 182bhp and 221lb ft.

An eight-speed automatic transmission sends all of this to the rear axle, where it's then deployed to the road. Unlike the 420d diesel, the 420i goes without any form of mild-hybrid assistance.

Suspension is by way of MacPherson struts and multiple links, with passive dampers and 18in alloys equipped as standard. Our test car, however, came with the £2500 M Sport Pro Package, which adds, among other things, adaptive dampers, 19in alloys, run-flat tyres and M Sport brakes to the equation. 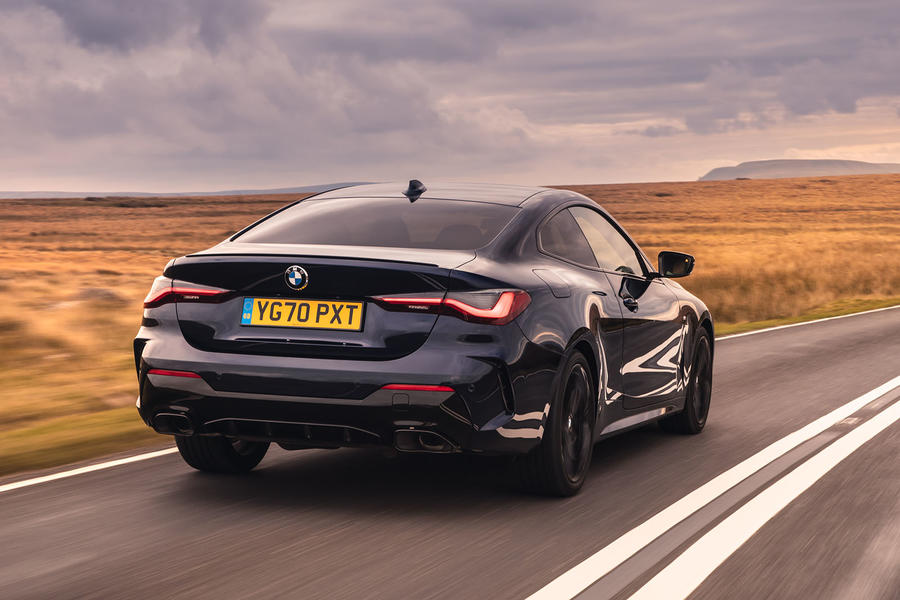 Due to its long and heavy doors, the process of climbing aboard the 420i can be a bit tricky - particularly if you find yourself hemmed in in a tight perpendicular parking bay. Once inside, though, you’re greeted by a cabin that’s at once familiar in its layout and attractive in its appearance and material selection.

The electronically adjustable seats position you suitably low down in the cabin and offer excellent underthigh and lateral support. You sit bang in front of a typically chunky M Sport steering wheel and BMW’s digital instrument cluster, which still looks a bit fussy and is tricky to read but is at least slick in its operation.

Over your shoulder are two rear seats, although most adults would be keen to avoid these if possible. This car really a rather lovely place to spend time, not least because you can’t see its face from the driver’s seat.

Thankfully, it’s really a rather lovely thing to drive, too. With its adaptive dampers knocked back into their softest setting, the 4 Series doesn’t feel quite as taut as a passively damped 3 Series and so on faster A-roads and motorways makes for an impressively comfortable yet controlled companion.

There's perhaps a slight fussiness about its low-speed ride and its run-flat tyres generate a bit of road roar at pace, but I can’t imagine anyone would ever find themselves flinching at the idea of having to use a 420i for a proper long-distance drive or, indeed, on a daily basis.

It handles sweetly, with its medium-quick, keenly weighted steering lending it a sense of agility and enthusiastic fleet-footedness that feels really quite special. It gives you a nice idea of how much grip you have at the front axle and, with a heightened level of lateral control, you can corner flat and quite fast, with little worry about running short of traction up front - even on a wet, slippery road.

Pare back the traction control and give the throttle a prod through halfway round slower corners and you can make the back end momentarily step out in a controlled, progressive fashion, but otherwise the 420i carves its way through bends very tidily indeed.

It really is a very enjoyable car to drive swiftly, but part of its charm is that it doesn’t necessarily make you feel obliged to do so all the time.

Its engine is at least partly responsible for this. It’s certainly punchy enough when you need it to be, with minimal turbo lag under part-throttle acceleration lending it good responsiveness, and a strong mid-range allowing you to make reasonably swift progress when you need to. But with an at-times gravelly soundtrack and a tendency to feel a bit wheezy right at the top end, you never feel particularly inclined to chase revs and accrue big speeds on the road. Better to relax a bit and just enjoy the car's responsiveness and agility well within the limits of its dynamic ability. 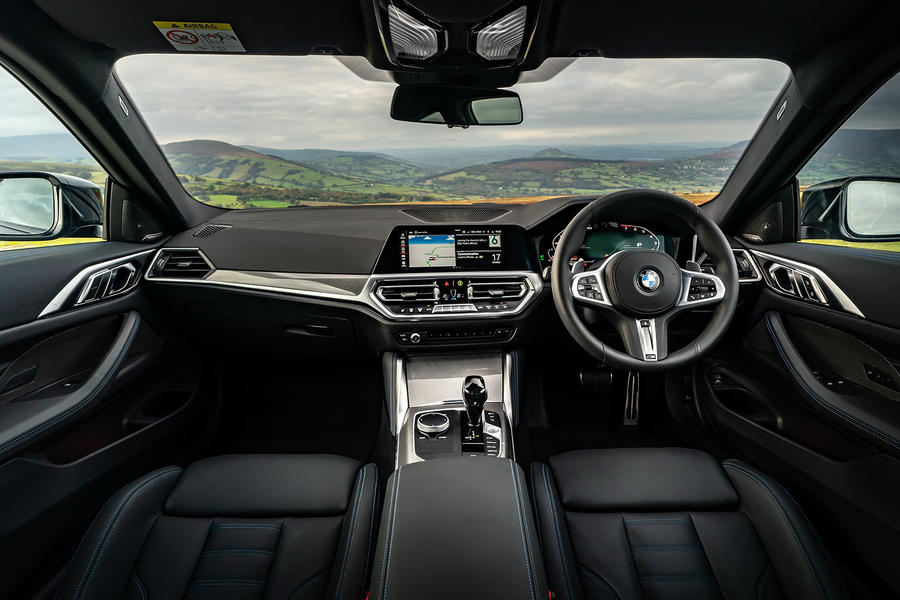 For the slick, engaging manner in which it drives, I don’t see why you shouldn't consider the 420i. I really like that it makes for a comfortable grand tourer of sorts that can entertain on a good road when you want it to. I also like how it just gets the simple things like driving position, interior design and ergonomics in a general sense right and is relaxing to casually tool about in.

The thing is, the 3 Series does all of that too - and it comes with the added practicality of a saloon or estate body. Surely part of the reason for buying a car like the 4 Series is the added style appeal that a coupé body brings. And I’m not sure this G22 model brings much at all to the table on this front – although perhaps I’ll warm to its appearance over time.

As competent as it mostly is, I’m not sure this particular engine would be the one I would go for either. Short of the full on M and M Performance models, I think the four-cylinder diesel might actually be a better fit, if only for the greater fuel efficiency it would undoubtedly bring.

The 38mpg figure I saw on my long-distance, mixed-roads test route isn’t exactly terrible, but the 420d wouldn't struggle to beat that. Even more tempting would be to wait for the six-cylinder 430d and M440d models. I know diesel is far from in vogue at the moment, but I can imagine both of those cars being pretty magnificent. 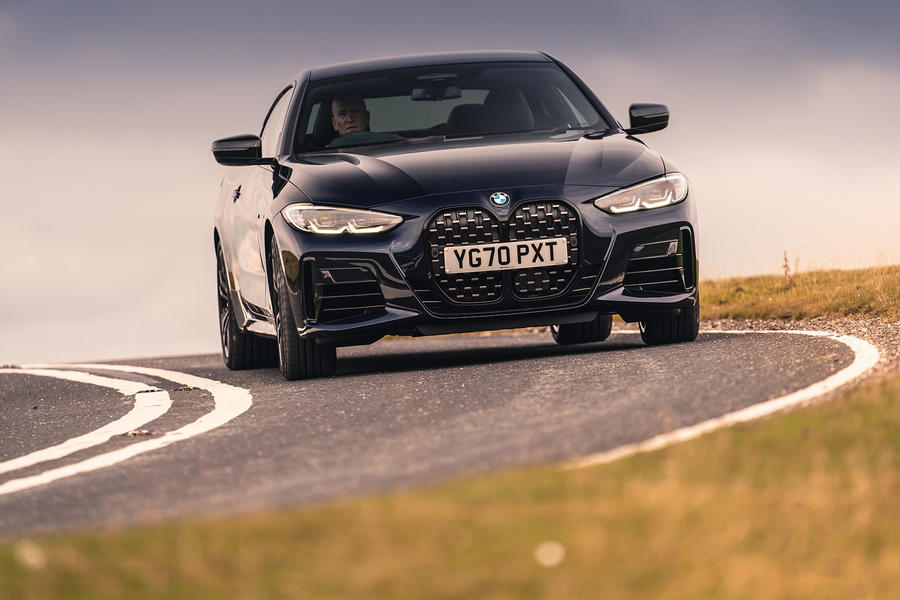 Anyone paying list for a BM is nuts. We got 6k off a 320i with no effort. I agree about the Polestar, I'm probably going Volvo as the offers at the minute make BMW etc look poor value although the 320i is a beautiful thing to drive and all the performance we need.

The previous model look so much better from every angle except maybe from behind, but the old model also look good from behind.

The design of this car is very disappointing, that some people say "they like it" is because these people will always like the newest design regardless what it looks like, it's people with no clue what good design actually is.

I don't really get this. The

I don't really get this. The only reason you would buy this over a 320i is the looks... and well yeah exactly, polarising looks is putting it lightly.

Other than that and about £8k in your back pocket, there's little difference.