From £29,7008
We give the range-topping 369bhp coupé a grilling over what matters most: driver appeal
Open gallery
Close

The past seven years have been kind to the BMW 4 Series.

Introduced with a good deal of fanfare in 2013, it has now recorded more than 800,000 sales worldwide, with nearly 150,000 of those in the UK, its second-biggest market behind the US. Its success is spread across three models – Coupé, Cabriolet and four-door Gran Coupé – and a range of four- and six-cylinder petrol and diesel engines, which have given it a broad appeal.

But the talk surrounding this new, second-generation 4 Series is not of the task it faces in living up to the sales performance of its predecessor or its new engines, which include the 369bhp 3.0-litre turbocharged petrol unit of the range-topping M440i xDrive Coupé driven here, but of – yes, what else? – that grille. The 4 Series’ design has widely divided opinions but, like it or loathe it, there is more to the second-generation model than its controversial styling.

BMW says it has conceived the new 4 Series, known internally as the G22 in coupé guise, to be a more distinctive, stand-alone model with greater exclusivity than before and this is reflected in its controversial appearance and improved quality. In dimensions, too, the new model shifts further away from the model it replaces. It’s 128mm longer (at 4768mm), 27mm wider (1852mm) and 6mm taller (1383mm), giving it greater presence and a more sporting form than the car it replaces.

As with its predecessor, the new line-up starts with the Coupé, which has traditionally accounted for 33% of 4 Series sales in the UK. It will be followed next year by the new Cabriolet (17% of sales last time round) and Gran Coupé (50%). The new 4 Series shares its CLAR platform and electric architecture, including 48V capability, with the latest 3 Series. Its wheelbase has grown by 41mm to 2851mm and, as part of efforts to provide it with a more sporting feel, its tracks are wider than the previous 4 Series’, at 1575mm (28mm wider) at the front and 1611mm (18mm wider) at the rear.

Crucially, for keen drivers, the new model’s centre of gravity is also 21mm lower than the first-generation 4 Series’, model for model. This has been achieved partly through a new material mix, with aluminium now used for the bonnet, front wings, doors and front suspension.

Further changes are centred on making the body structure stiffer than that of the 3 Series. To achieve this, BMW has fitted the 4 Series with a new shear panel within the front bulkhead, a newly designed strut across the front suspension towers and an extra A-frame support at the front of the engine bay.

Inside, the layout is familiar, with a layered dashboard from the 3 Series, complete with standard 12.3in digital instrument and 10.3in infotainment displays – the latter of which can be operated via a rotary controller or touch commands as well as optional speech and gesture controls – in the M440i xDrive. Overall, the cabin features much higher perceived standards of material and finish than the previous 4 Series.

The driving position is quite different from that of the 3 Series, courtesy of a more heavily angled windscreen and lower mounting of the front seats, which in combination with the multi-function steering wheel offer generous adjustment. While you’re never going to buy the new 4 Series for its accommodation, it now offers greater space up front than the old model. There’s also claimed to be more room in the rear, although head room is quite limited in the back, even though the individual rear seats are set fairly low. Boot space, meanwhile, has been reduced by five litres to 440 litres.

Overall, there are six second-gen 4 Series Coupé models, with a choice of four engines. These include a base turbocharged 2.0-litre four-cylinder petrol unit with 184bhp in the 420i and 258bhp in the 430i – both of which come as standard with rear-wheel drive. The diesels, all featuring 48V mild-hybrid tech and standard four-wheel drive, start with a turbo 2.0-litre four-cylinder delivering 190bhp in the 420d xDrive. Next year, a turbocharged 3.0-litre inline six-cylinder diesel with 286bhp in the 430d xDrive and 340bhp in the M440d xDrive will also join the line-up in the UK.

The M440i xDrive heads the new range – and it has 43bhp more than the earlier 440i it effectively replaces, at 369bhp. Its turbo 3.0-litre six-cylinder is certainly no stranger, having already appeared in various new BMW models in recent times, including the M340i xDrive, with which the headlining 4 Series also shares its eight-speed torque-converter automatic gearbox, four-wheel drive system and electronically controlled rear M differential. 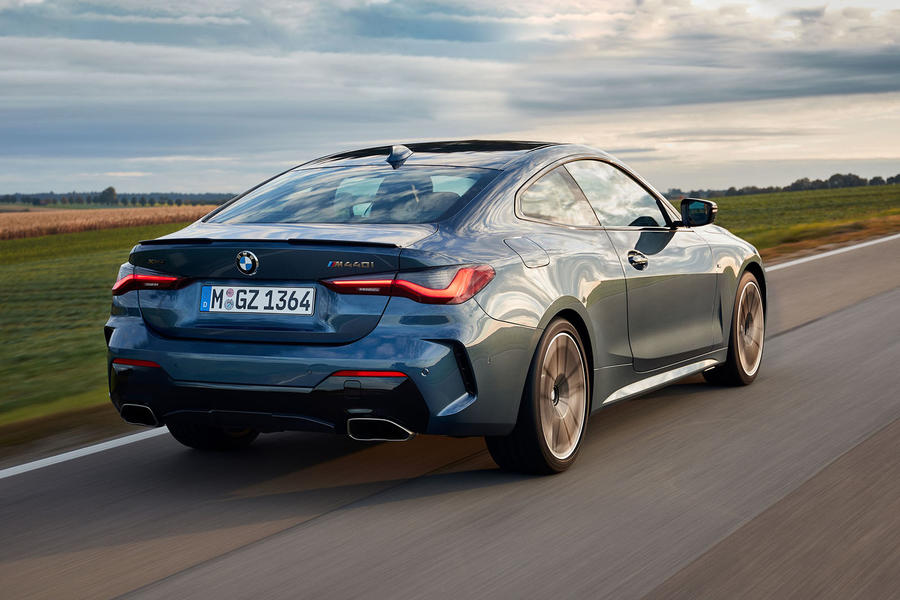 It is the inherent smoothness and willingness to rev that mark out the M440i’s engine. However, its low-speed pick-up in taller gears and strapping mid-range flexibility are equally as impressive. The new junior M car may not deliver the same pin-your-shoulders-back accelerative intent as a full-blown six-cylinder M car, but with 369lb ft at 1900- 5000rpm, it is both wonderfully rounded and engaging, delivering strong in-gear urge together with truly relaxed part-throttle cruising.

The praise continues with the gearbox. Whether casually swapping ratios at low revs or performing shifts close to the 6800rpm ignition cut-out in manual Steptronic mode via the steering wheel paddles, it is always smooth and fast.

There are three main driving modes: Eco-Pro, Comfort and Sport. A fourth Adaptive mode that combines all three depending on the driving conditions can also be called on. New to the 4 Series is an additional Sprint mode, which switches the car into the Sport setting using one of the shift paddles.

The six-cylinder’s muscular growl and enthusiastic exhaust note, which are enhanced synthetically over the cabin speakers, are never quite as dominating or melodious as those of the petrol units used in full-fat M cars. Nevertheless, its subtle purposefulness at part-throttle and more meaningful acoustic intent under full load help to underline the M440i’s performance capabilities.

The suspension retains the same design as the 3 Series’, with an aluminium-intensive MacPherson strut layout up front and a five-link arrangement at the rear, although it has its own unique kinematic properties, and the 4 Series also gets greater camber on the front wheels. Another key development is the adoption of BMW’s lift-related dampers, which feature main and auxiliary springs as well as hydraulic bump stops to progressively increase pressure within the damper under compression while progressively adjusting the rebound properties.

However, the M440i receives uniquely tuned M Sport suspension with electronically controlled adaptive dampers. The standard wheels start at 17in in diameter and increase to 19in in combination with an optional M Sport Package Pro, which also brings the 225/40- and 255/35-profile Michelin Pilot Sport 4 tyres fitted to our test car.

Despite its larger dimensions, the 4 Series is easy to place on the road. Fully befitting its sporting brief, it is engagingly fleet-footed and quite incisive in its actions. The variable-rate sport steering of the M440i is direct off centre, too, giving the new BMW urgent turn-in. It’s also more feelsome than that of the old model. The way the weighting and overall responsiveness increase with lock are key to delivering a sense of all-round confidence in the well-balanced chassis as you thread the 4 Series down a challenging back road in Sport mode.

Body control, meanwhile, is excellent. BMW’s efforts to lower the centre of gravity can be felt in the way the 4 Series scythes through corners with greater enthusiasm and a higher degree of calmness than its predecessor. There’s a heightened sense of overall dynamic prowess that’s not only rooted in its firmer damping, but also its inherent balance, which is quite outstanding.

Although the M440i is four-wheel drive, its variable apportioning of drive is such that it feels distinctively rear-wheel biased in dry conditions. With the electronically controlled M Sport differential also working to vary the drive between each individual rear wheel, it delivers outstanding grip and traction, and the additional security and confidence it instils in the driver on wet roads makes it well worth consideration, even if it lacks the overall fluidity and engagement of the traditional rear-wheel-drive set-up available on other models.

BMW’s efforts to provide the 4 Series with a more sporting character haven’t come at the expense of ride, though. With the adaptive dampers set to Comfort mode, there’s mild restlessness and the odd thump on less than smooth road surfaces around town. However, the action of the springs and adaptive dampers is exceptionally well controlled. Together, they quickly eliminate all but the most extreme of impact shock before it has a chance to unsettle progress.

At higher speeds on the open road, the ride is even more resolved, providing the new 4 Series with a fittingly purposeful but highly comfortable character that, in combination with low levels of wind noise and road roar, makes it a formidable long-distance proposition. 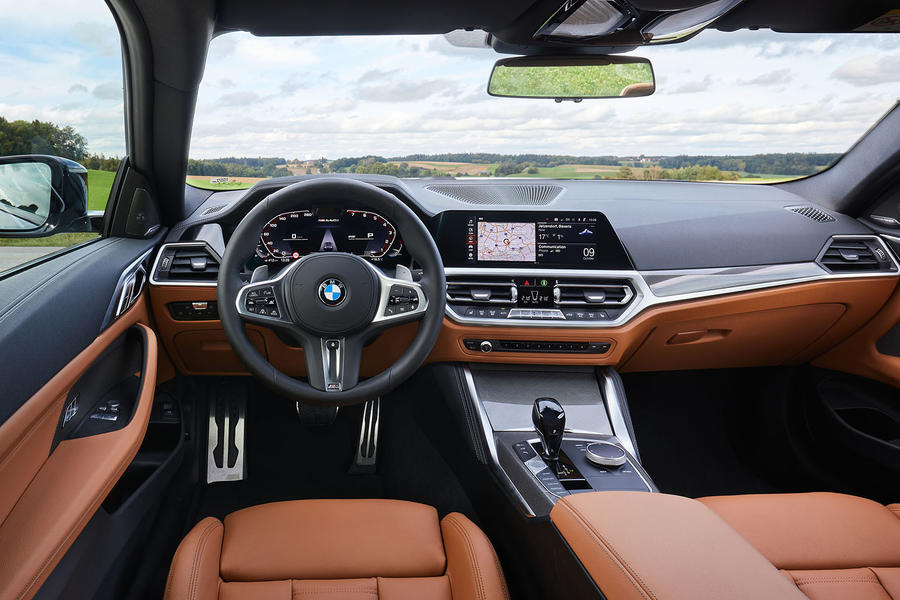 The new 4 Series Coupé has clearly taken on a more sporting role in the BMW line-up. It is now further differentiated from the 3 Series, on which it is largely based, in terms of its driving experience, being more incisive and generally more alert in its actions.

The M440i sets a high standard of performance, although ultimately it will be the milder versions on which the 4 Series’ sales success will hinge. It’s not the prettiest car BMW has ever produced, but it is one whose clear purpose and heightened dynamic abilities make it a very convincing and entertaining contender. 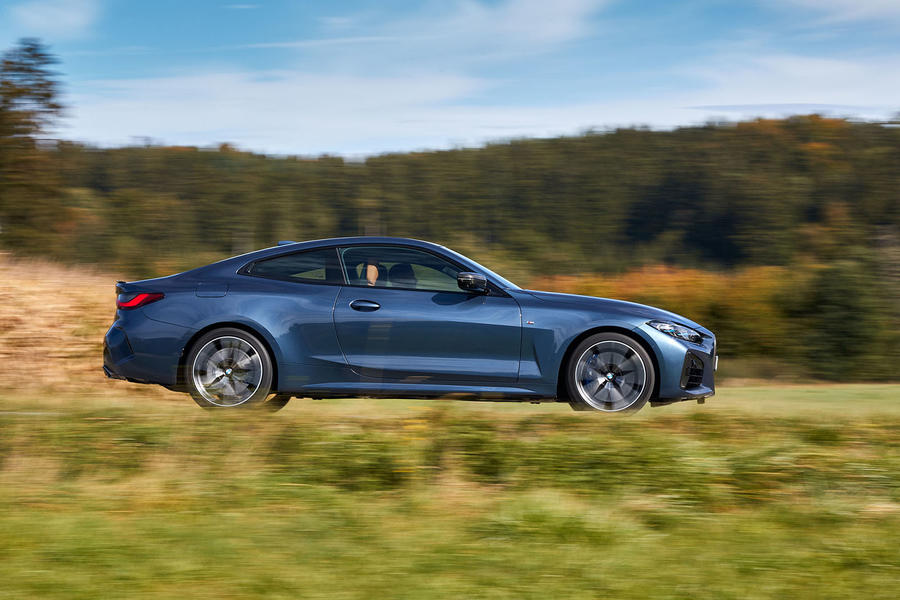 It's a joy to see a truly proffessional marketing department at work, the design of this thing providing all the impetous that's needed to wait for the i4 to come trundling down the road. Mind you, that's got a pretty stupid grin on its face as well.

I have to put my two cents in...I currently drive a 2018 440i msport with a very rare manual 5 speed stick shift. Absolutely love this car. Its responsiveness is undeniable. I am about to test drive the new 440i msport. If it's as good as I hear it is I am buying it. The 4 series is a sleeper. I dont think I will ever own any other car.
BlahBlah43 22 October 2020

This read like an advertisement. At least display "Sponsored Content" authentic top so everyone knows what they are in-stored for.
View all comments (15)