From £28,6548
Italian compact exec still delivers on driver appeal, even if the updated interior isn't quite on par with the class best
Open gallery
Close

If you have designs on the new BMW 3 Series, it would be plain ignorant not to drive the Alfa Romeo Giulia, which has been lightly but meaningfully updated for 2020.

In a diminishing field, both cars are sold on the idea that style and keen handling are at least as important as fuel economy and how smoothly that all-important infotainment touchscreen works. In each case, it’s also possible to spend more on extremely powerful versions with more than 500bhp, but the point with these cars is that even less exalted derivatives with only around 200bhp should still deliver solidly enjoyable rear-drive saloon dynamics.

The Giulia Sprint tested here is one of those less exalted derivatives, although, at more than £37,000, it might not immediately seem that way. It means the Alfa costs more than the 320i M Sport it goes directly up against, although 197bhp and 243lb ft give it an edge on paper and the resulting 6.6sec sprint to 62mph is stronger than most at this level.

If that still isn’t strong enough, £42,575 buys the Giulia Veloce, which is fitted with the same 2.0-litre engine but tuned to a healthy 276bhp. These cars are identifiable by their larger teledial wheels and more aggressive styling for the bumpers, although even the Sprint hardly lacks visual clout.

The Sprint will also be quick enough for most people, and when you factor in an eight-speed automatic gearbox (sourced from ZF) and plenty of aluminium in the suspension (unusually for the class, the Giulia essentially gets double wishbones at the front), no one can accuse this car of skimping on the hardware.

Inside, plenty of small changes have added up to create an ambience that’s much more threatening to the hitherto untouchably slick 3 Series and Audi A4. Admittedly, there is still a small deficit in perceived quality, but many of the cheaper plastics have been replaced and our test car had an array of interesting and widely varying textures, despite the monochromatic colour scheme.

Monochromatic, that is, apart from the new tricolore motif at the base of the gear selector. It’s a small but likeable detail that shows the Italians have lost none of their enthusiasm for debecking home-grown cars with the national colours (see Lamborghini Huracán Performante, Ferrari 360 Challenge Stradale, Fiat 500).

Elsewhere, the 8.8in central display (now touch-sensitive) is as neatly integrated into the dashboard as ever, and new software means the menus are more easily navigable and, frankly, intelligible. The new smartphone mirroring is also useful, with Android Auto filling the screen generously and the new-and-improved rotary controller atop the transmission tunnel feeling more satisfying to use. 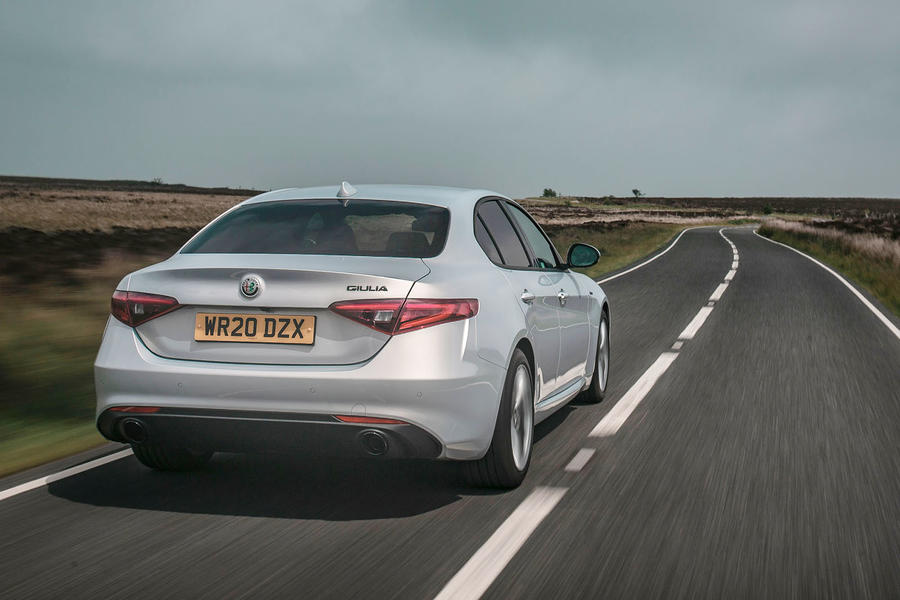 The Sprint is surprisingly quick, although this has just as much to do with how brilliantly well the chassis sustains velocity as it does with how much power and torque the engine makes.

There’s certainly no shortage of torque – something that's useful, because the gearbox is smoother than it is quick. There’s also an oddly pronounced sensation of flywheel effect, and of the crankshaft being driven by the gearbox rather than the pistons. This robs the powertrain of some involvement – more so because the exhaust note is muted, in line with the car’s quasi-opulent vibe.

No, what really beguiles with the Giulia driving experience is the way the chassis maintains composure without resorting to firmly sprung suspension. Even rougher B-roads don’t seem to upset its cornering balance, which is one of resolute power to the rear wheels, with the fronts used only for guidance.

It sounds simple enough, but when so many cars are either front-wheel drive or have driveshafts at each axle, it’s easy to forget just how good pure rear-wheel drive can feel when executed well, even in relatively normal machinery. And the Giulia makes more of a virtue of this than any rival apart from, perhaps, the Jaguar XE.

In fact, with the Giulia, the platform itself feels carefully and expensively engineered; this is unusual and quite different from the more obvious feeling you get from expensive dampers, which alone couldn’t deliver such unruffled ride quality. The stiffness of the structure is evident in every easily dispatched ridge or rut along your B-road route, and in the way the Giulia never seems to waste any of its relatively modest power.

The result? If you had told me this four-cylinder turbo engine made closer to 240bhp, I wouldn’t have doubted it, and yet the crank will still turn unobtrusively on the motorway, returning almost 45mpg in the process.

Of course, there are also some less impressive aspects. The steering remains too alert off-centre and largely anonymous in terms of road feel, and the Giulia is a confidence-inspiring sports saloon despite its electromechanical rack, not because of it. The brakes, which operate by wire, are also somewhat numb and never feel linear enough. It's a shame, because the design of both the steering wheel and the pedals wouldn’t look out of place in a bona fide sports car. The slim rim of the former is brilliant to hold.

Likewise, minor frustrations in the day-to-day experience also jar. Given that the almighty gearshift paddles are wrought in proper metal that’s refreshingly cold to the touch, why do the steering column stalks feel like they're made from recycled dustbins? Our test car’s DAB signal was also intermittent, and somehow there’s no ‘soft’ indicator setting.

Frustrating? Well, yes. And yet one glance at the car’s curvaceous snout or its flush exhaust outlets, followed by three corners spliced through in lightly committed fashion, and you’ll have forgiven the Giulia. Do this often and you’ll also have very few regrets.

In fact, the handling is no less satisfying than the BMW’s. Right up to the point, that is, when you’ve got the bit between your teeth and are beginning to loosen the electronic chassis aids (not least because, in the Giulia, you still can’t do this). At this point, the Giulia lacks the 3 Series’ incisiveness and agility. It’s then difficult to comment on just how playful the Italian car is, because those electronics get in the way. 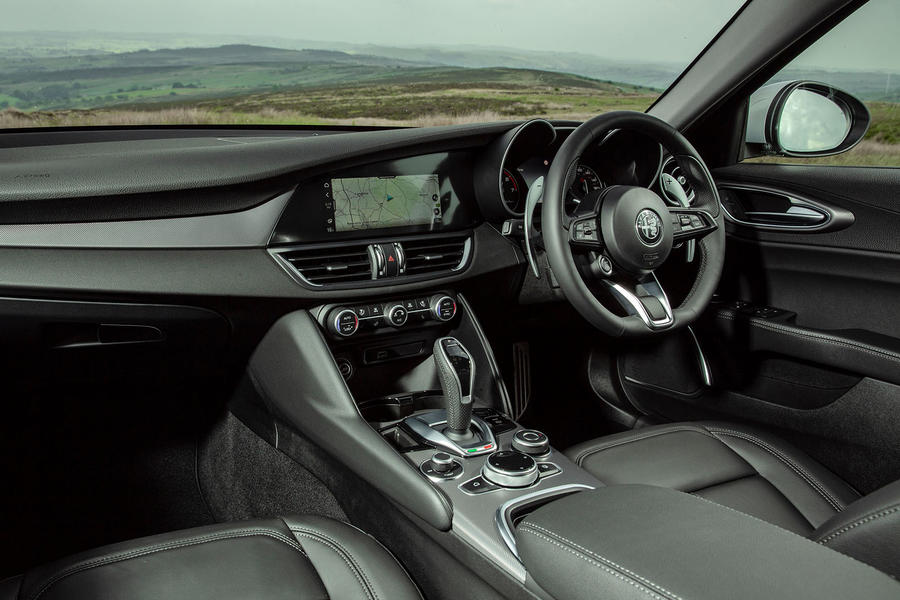 Whether you buy this Alfa is going to come down to your priorities, and what you’re prepared to trade.

Dynamically, the Giulia isn’t as sharp as the new 3 Series. However, its gait is more mature and the chassis is more satisfying to guide at a canter. The cabin is also possibly the more refined of the two, at least in terms of pure isolation, and all of the above gives the Giulia an enjoyable and thoroughbred GT-style character – one the romantic exterior feeds into at all times and in all places.

What you won’t get in the 3 Series – or the Audi A4, or to some extent the Mercedes C-Class – are the day-to-day niggles, such as the indicators or choppy adaptive cruise control. Although much improved, the infotainment array also falls behind BMW's iDrive in several key ways. It means those who like to be reminded that they’re driving the opulent product of precision engineering still won’t fall for the Alfa as easily as they might for the others.

And yet in almost every other way, the Giulia is the most enticing car in its class. Charisma and that fine-handling chassis, only now with added comfort and convenience… it's a special blend. 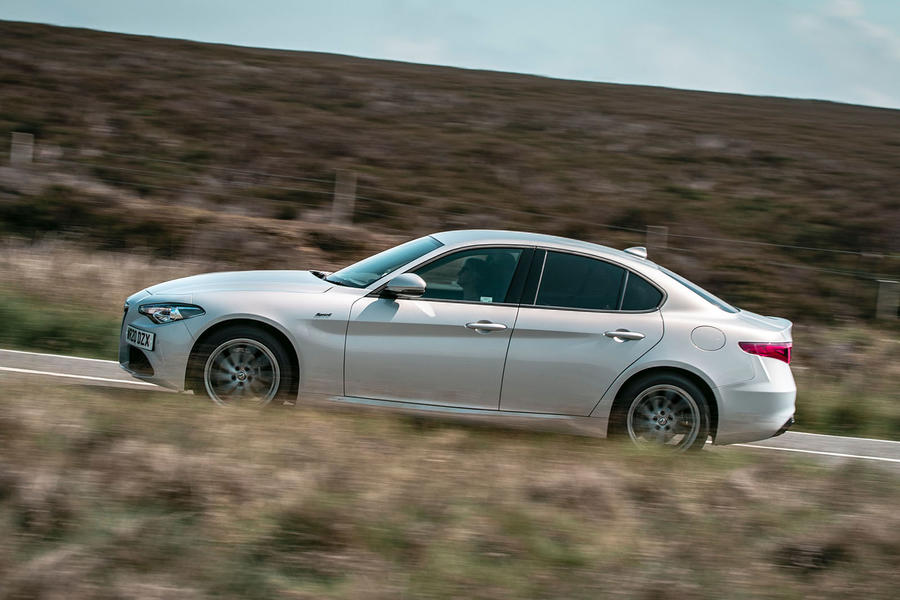 Having driven a Guilia and

Having driven a Guilia and German equivalents there is just no contest, the alfa is the superior driver's car. The interior seems just fine to me, better than the BMW's functional and souless offering, and as for quality, I think it's pretty even. It's reviews like these that ended my subscription a long tome ago and saved me a fair bit of money. When will AUTOCAR tell the truth that whatever alfa do, however good their cars, they will never beat the Germans as far as this magazine is concerned?

This spam-posting thing really must be fixed. It's infuriating, and I'm on the verge of simply not bothering with Autocar anymore. My post above was flagged as spam. I removed the double-dash punctuation, and then it was OK. Yet the BLATANTLY spam working-from-home post above got posted...