This is what will soon be the older and bigger of two SUVs from Alfa Romeo, the Stelvio - and it has just had a mid-life facelift.

There are tweaks and upgrades for the interior, whose relative shortage of genuinely impressive perceived quality and up-to-date on-board technology came in for criticism when it was launched three years ago. The car’s equipment levels have now been improved across the range, while new active safety and level two semi-autonomous driving technologies have been added to the options list.

UK-based Stelvio buyers can choose a car in Super, Sprint, Lusso Ti or Veloce trim and powered by a 197bhp 2.0-litre turbo petrol or 188bhp 2.1-litre diesel four-cylinder engine across most of the range, with only Veloce models increasing the power outputs of those engines to either 276bhp or 207bhp respectively. And then there's the madcap 503bhp Quadrifoglio performance version, a car that, in just the right circumstances, may even be a faster and more dependable way to make your children return their breakfast than any emetic drug.

The Stelvio uses standard coil spring suspension, with lowered and firmed-up springs and ‘frequency-selective’ dampers coming on Veloce versions. A Performance Pack that adds fully adaptive dampers and a mechanical limited-slip differential for the rear axle is optional on all bar the entry-level Super version.

All Stelvios get an eight-speed automatic gearbox, and all get Q4 clutch-based four-wheel drive except the rear-driven, entry-level diesel. Prices now start at a whisker under £40,000, which is a hike of between 6% and 10% on 2019-model-year brochure prices - although that comparison doesn’t allow for the new car’s enriched specification.

Alfa’s Stelvio engines were made Euro-6D WLTP-compliant in 2018, and no revisions have been made to the car’s suspension or steering systems, or to any of its powertrains. 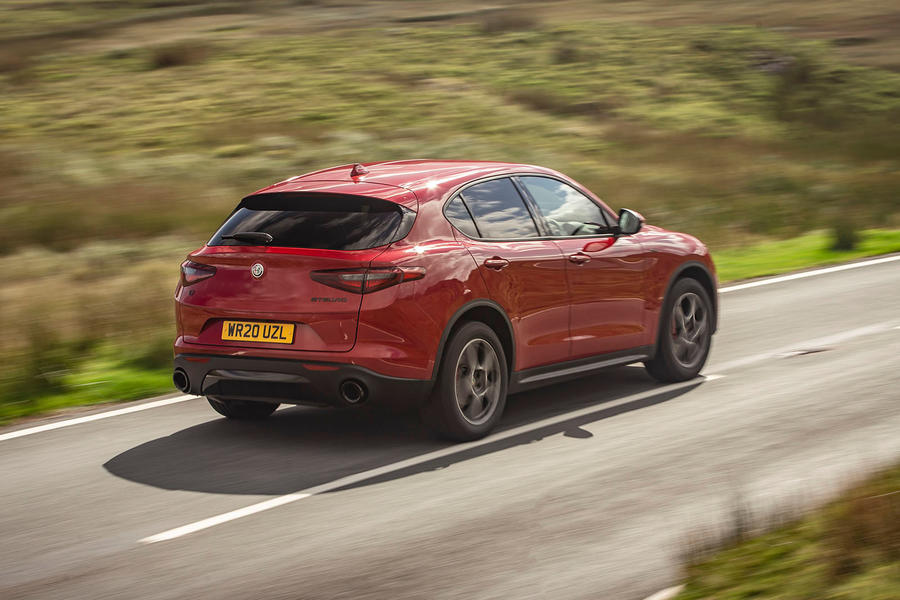 We tested the car in mid-range four-wheel-drive 2.1-litre turbo diesel Sprint form, in which it provided a broadly familiar driving environment and experience. If you’re a keener driver, you’re still more likely to be attracted to the Stelvio by the latter than the former, though, in spite of Alfa’s attempts to smarten up the interior.

The changes to the cabin certainly take a keen eye to spot. There’s a new grooved aluminium finish to the centre console and some richer trim materials on the gear selector lever and infotainment controls. There’s also a neat little tray just ahead of the armrest cubby to simply drop your smartphone into for wireless charging (where compatible), and - in the wondrous era of keyless car operation - also a new, roughly key-fob-sized storage cubby just next to the gearlever where you can keep your car key while driving. What, exactly, was wrong with an ignition barrel in the first place is a question that still puzzles so many of us.

There remain plenty of places where the Stelvio’s interior looks and feels just a little bit cheaper and plainer than an equivalent Audi, Mercedes or BMW, though. The grade of the plastics used on its air vents and column stalks can be all too easily compared with what you might find in a holiday rental, and the look and feel of its steering-wheel-mounted switchgear isn’t a lot classier. Much of the ‘leather’ used around the lower reaches of the fascia quite clearly isn’t what it’s pretending to be, either.

On the plus side, the part-leather seats are smooth and tactile enough, and there are other material niceties to discover besides. The oversized, column-mounted aluminium gearshift paddles are easy to find without looking, and they reward you with a cool metallic touch.

There’s also an Alfa Romeo logo ‘designed in’ to the two-piece load-bay cover that reflects appealingly in both the rear-view mirror and the rear screen. It’s the sort of thing a designer would come up with to add a sense of richness and occasion to a car in a fairly cost-effective way.

The bottom line, however, is that Alfa could certainly have done more to lift the quality look and feel of this interior if it really wanted the Stelvio to finally tempt people out of Q5s and X3s in bigger numbers. What it has done isn’t too convincing, and only narrows very slightly what remains a sizable deficit to those German rivals.

The updated infotainment system is an improvement on the old one in some ways. The 8.8in screen is no larger than it was and suffers with the same pervading dimness that characterised it before, although at least that means it shouldn’t dazzle too much. It is more usable than previously, though, with a new customisable home screen whose layout you can decide on yourself in order to grant easier access to the functions you use most. Wired smartphone mirroring for both Apple and Android handsets is standard through a USB 2.0 port up front, and there’s a second port in the back to keep the kids’ devices working.

You start the car’s engine via a button on the steering wheel, and, after the usual diesel commotion, Alfa’s 2.1-litre diesel runs relatively quietly. Even so, it’s a slightly old-fashioned-feeling diesel that’s particularly big on mid-range torque but also particularly slow revving. It pulls with real gusto from below 2000rpm, but shifts long before 4000rpm.

Alfa’s WLTP emissions retuning may have even sharpened the tendency of the eight-speed gearbox to upshift early during acceleration, and to hang on to high gears a little too long before downshifting at low speeds, the latter adversely affecting roll-on pedal response sometimes. That doesn’t make the car slow or unengaging to drive, though; not, at least, if you use the car’s Dynamic drive mode, which seems to disable some of the powertrain’s emissions-saving tricks, and also adds much-needed weight to an otherwise light but direct steering system.

Even in mid-range form, the Stelvio is agile, poised and grippy for a mid-sized SUV. It’s got a slightly busy, firmish low-speed ride and, at least until you’re used to the directness and feel of the fast but muted steering, it’s not the most instinctive car to guide down the road. But it does handle and perform like a car with a bit of sporting soul, once you’re used to its slightly unusual motive character – and few direct rivals manage the same. 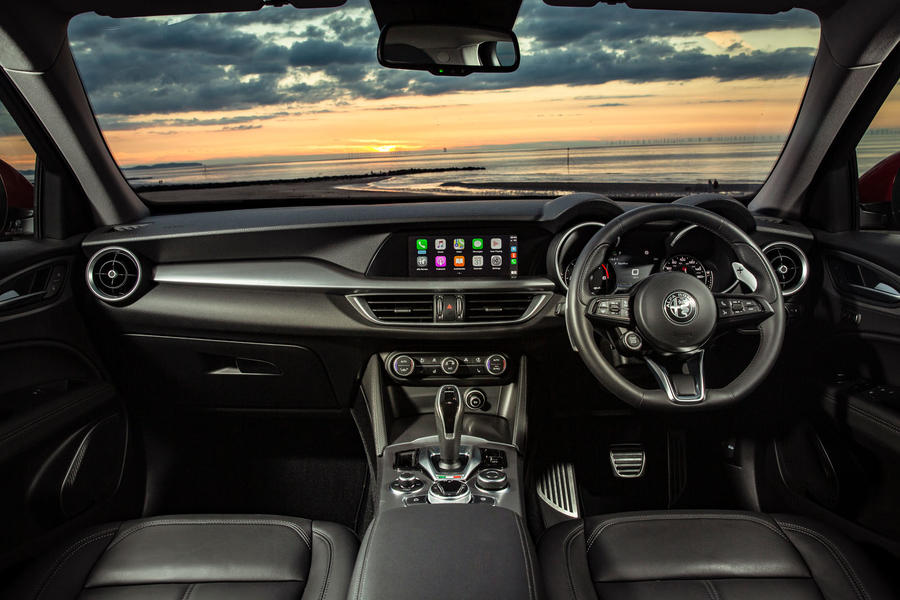 Some of the little quirks and creases of these new-generation Giorgio-platform Alfas - the electrical gremlins, the slightly over-sensitive response of that by-wire brake pedal, and one or two other things - should perhaps have been ironed out of cars like this Stelvio by now. Our test car had electric windows that didn’t always do quite as instructed at the first time of asking, for example, and some low-speed drivability foibles you wouldn’t expect to find in an Audi or Mercedes.

Even so, as much as Alfa’s attempts to make this car more of an SUV sophisticate have had only limited success, the Stelvio remains a handsome, likable alternative to what have become the default-choice premium-brand options - as long as you value the handling dynamism it continues to trade on so squarely.

Turin simply has to make cars such as these if it wants to continue in business, after all; and, in some of the finer details, it could clearly still do the job a little bit better. We should perhaps remember, however, that if it made SUVs too much like the way Ingolstadt and Stuttgart does, for Alfa that would be an even bigger failure. 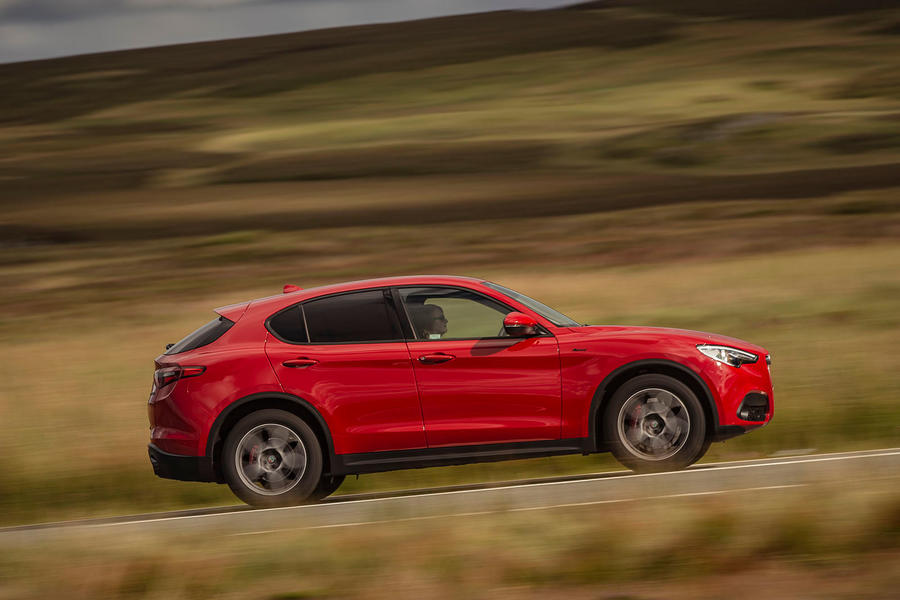 Matt Saunders, this must be real Alfa hater. cant say more, this is ridiculous review. Total lies full, and this wasnt Alfa mid life facelift, this was minor update to to interior. In real life Alfa interior quality is fully in par for example Jaguar. Maybe next time check those Audis and Mercs poor qualities also? they have also those.

Lot of passion in this

I am wrestling between an Alfa and a Merc and its probably the better value of the Merc and great engines that's winning. But after long test drives and playing around up close with plastics I could not say a Merc interior is that much better than the Alfa. Screens are better, clearly but not that concerning for me if I use Car Play and have an IPAD at home. Its tit for tat the Merc interiors look great at a distance but if you look closely there is a hell of a lot of cheap plastic e.g. centre cubies, rear vents, plastic leather, Alfa looses points for quality of door bins and vents.  Its true the brake feel is a smidge off its bit hair trigger but I think I would get used to that. Neither steer anything like as consistently as any Jaguar - period and both fidget and shake on broken roads with the Merc being worse. BTW both the cars I road tested had electrical gremlins the merc kep noisily reporting the key was not in proximity when it was in the slot and the Alfa came up with a tyre pressure warning. What this ramble is trying to say is IMHO there is less between cars these days than winers and losers reviews suggest.

A typically biased, negative review from Autocar of a car that has the AUDACITY to commit the unforgivable SIN of being something other than a BMW, a Jaguar or a Land Rover.

Did they run out of faint praise? Find out next week when they review other cars that aren't from their favoured marques.