Second generation BMW Mini Cooper S is a riot to drive and more affordable than ever, but not without its issues...
Open gallery
Close

The Mini is such a friendly little thing that it comes as a shock to discover that the minute your back is turned, the Cooper S of 2007-13 likes to throw its timing chain.

It’ll give you a few hints first, like a brushing noise or perhaps a rattle, from cold at idle. I once owned a Vauxhall Zafira 2.2 that did the same thing. The noise came and went and then one day the pistons and valves shook hands, and that was that.

The same will happen to the Cooper S’s engine, although more likely to any fitted before 2011, after which a revised chain tensioner was installed.

That’s right: it’s the hydraulic tensioner rather than the chain that’s the culprit. It doesn’t help that the engine likes a drink – as much as a litre of oil every 1000 miles. That’s a healthy engine, by the way. As the cars get older, experts say the engines are springing oil leaks in most un-BMW-like ways. Fail to keep your eye on the level and a red warning light will be the least of your worries. 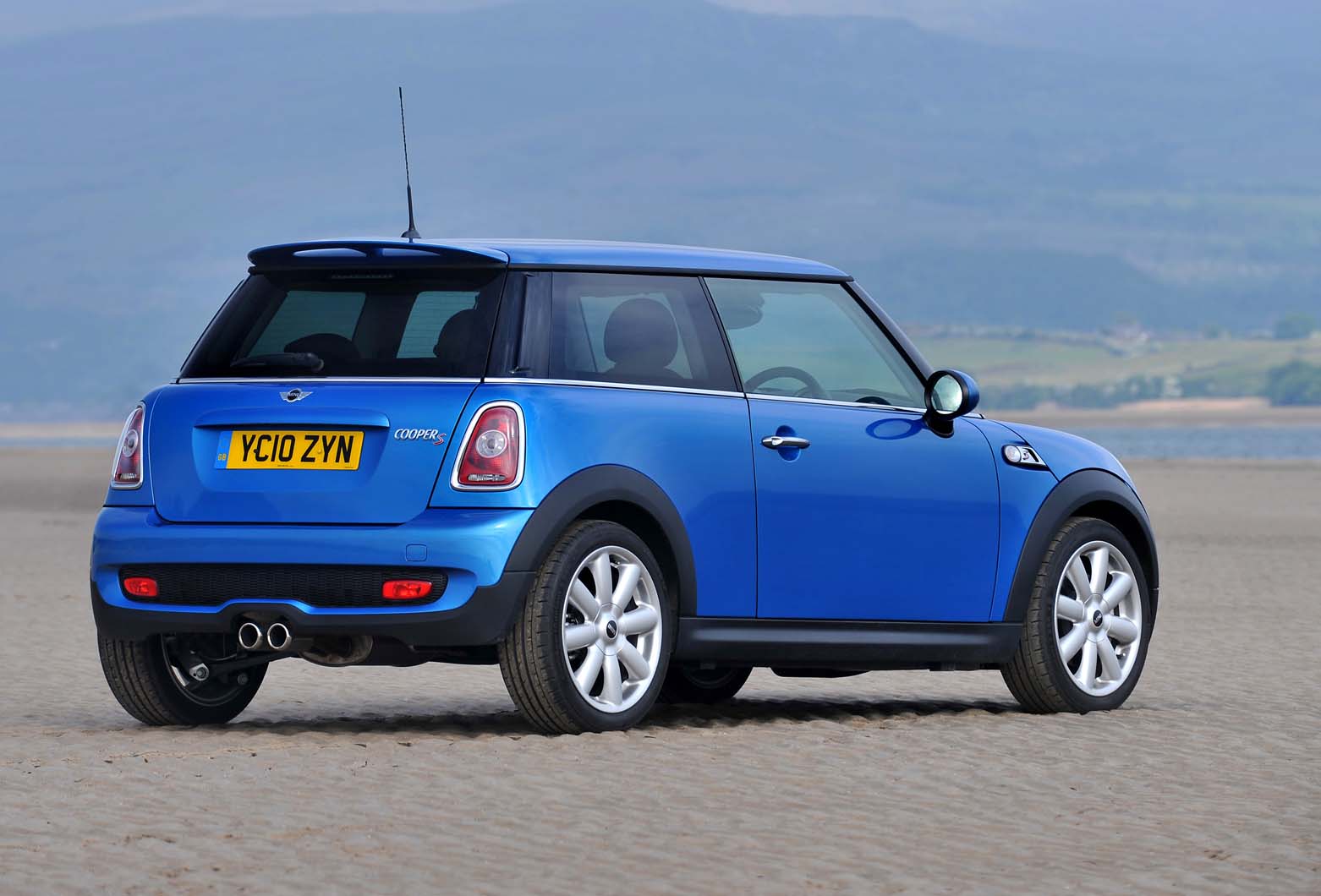 The second-generation R56 Cooper S was launched in the shadow of its predecessor, the popular R53 of 2002-06. That earlier version was powered by a Chrysler/Rover-developed supercharged 1.6-litre engine made by Tritec. Its successor dispensed with that in favour of the new BMW/Peugeot-developed Prince engine, a turbocharged 1.6 making 173bhp, with 177lb ft from 1600-5000rpm or an overboosted 192lb ft.

Its codename is N14 and it has BMW’s infinitely variable single Vanos valve timing. This is important because, in early 2010, as a result of what at the time BMW doubtless referred to as ‘continuous product improvement’ but what you and I might call a barrage of complaints, it replaced it with a revised version called the N18.

Mini splits the difference between Cooper S and John Cooper Works, and what a revelation it is

Happily, the uprated engine produced 182bhp and, among other things, had a double Vanos system controlling both intake and exhaust valves to provide a more even spread of torque and lower emissions.

But it also gained mods that looked suspiciously like a ‘fix’ to an unacknowledged problem. Changes included redesigned pistons, an uprated boost line to the turbo, improved crankcase ventilation, a heat shield over the turbo oil pipe and a rigid instead of flexible turbo intake pipe. Experts reckon the N18 is the engine to have. You can identify it by its large plastic cover, while the N14 is ‘naked’. Meanwhile, onthe transmission front, the manual gearbox gained an improved clutch for better gear synchronisation. 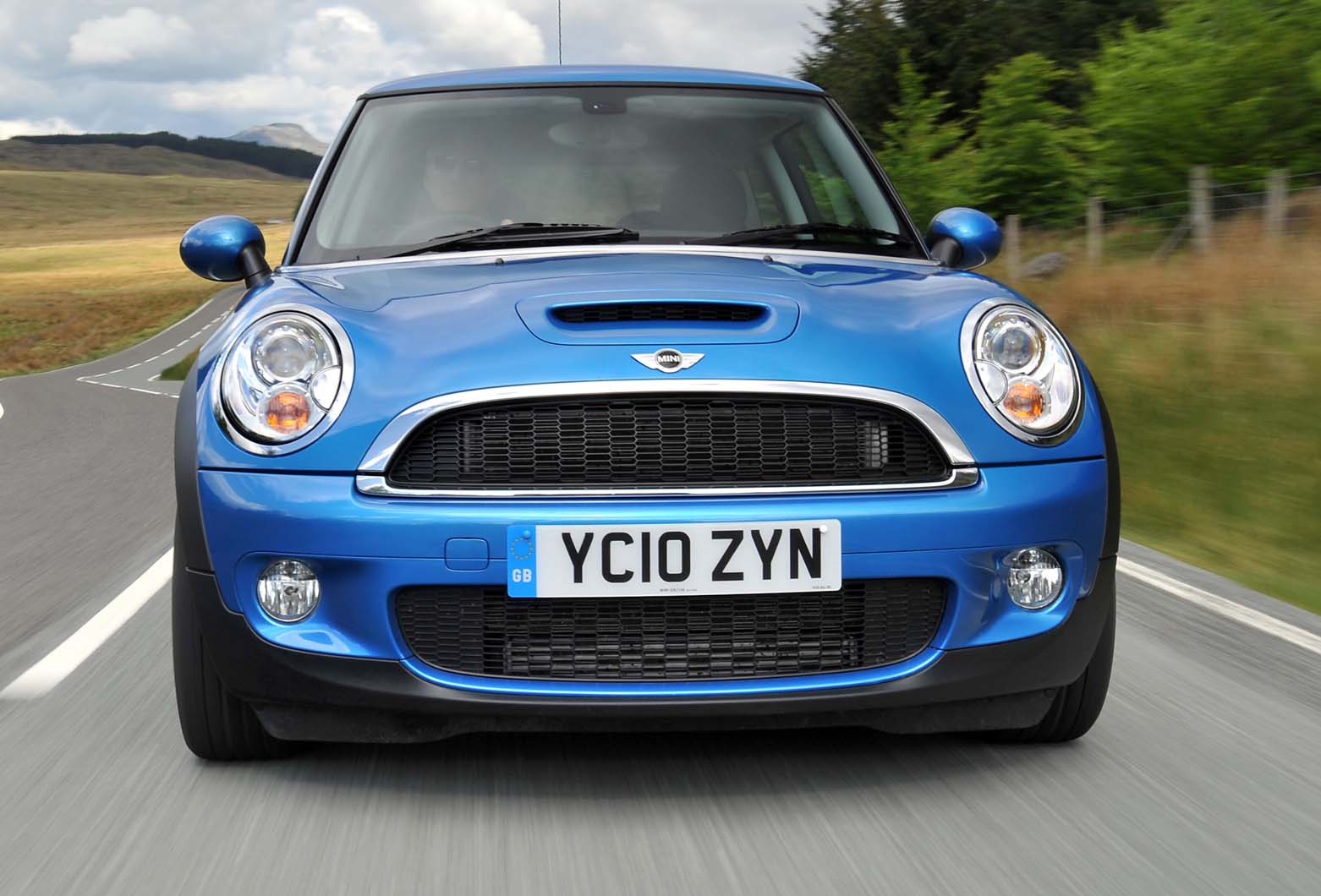 Bizarrely, the changes were followed a few months later by a full facelift (new bumpers, revised interior, LED tail-lights with pulsating brake lights to indicate the force being applied and additional air intakes). As already noted, in 2011 a revised timing chain tensioner was fitted. Now, at last, the R56 couldn’t spring any more surprises except the one common to any well-bought R56 Cooper S, and that’s just how much fun it is to drive.

An expert’s view, Alex Castle, MASTERDRIVER.CO.UK: “The R56 timing chain can let go at around 80,000 miles. The plastic tensioner guide is the culprit. If you hear a brushing sound, it’s on the way out and you should change it without delay. The later N18 engine is much improved but the tensioner wasn’t upgraded until 2011. Fortunately, owners are enthusiastic and look after their cars. There are plenty to choose from so you can afford to be fussy. New, options were pricey, but that cost evaporates as the cars get older so fully loaded Coopers aren’t much more expensive. My favourite extras are the panoramic roof and Harman Kardon sound system.” 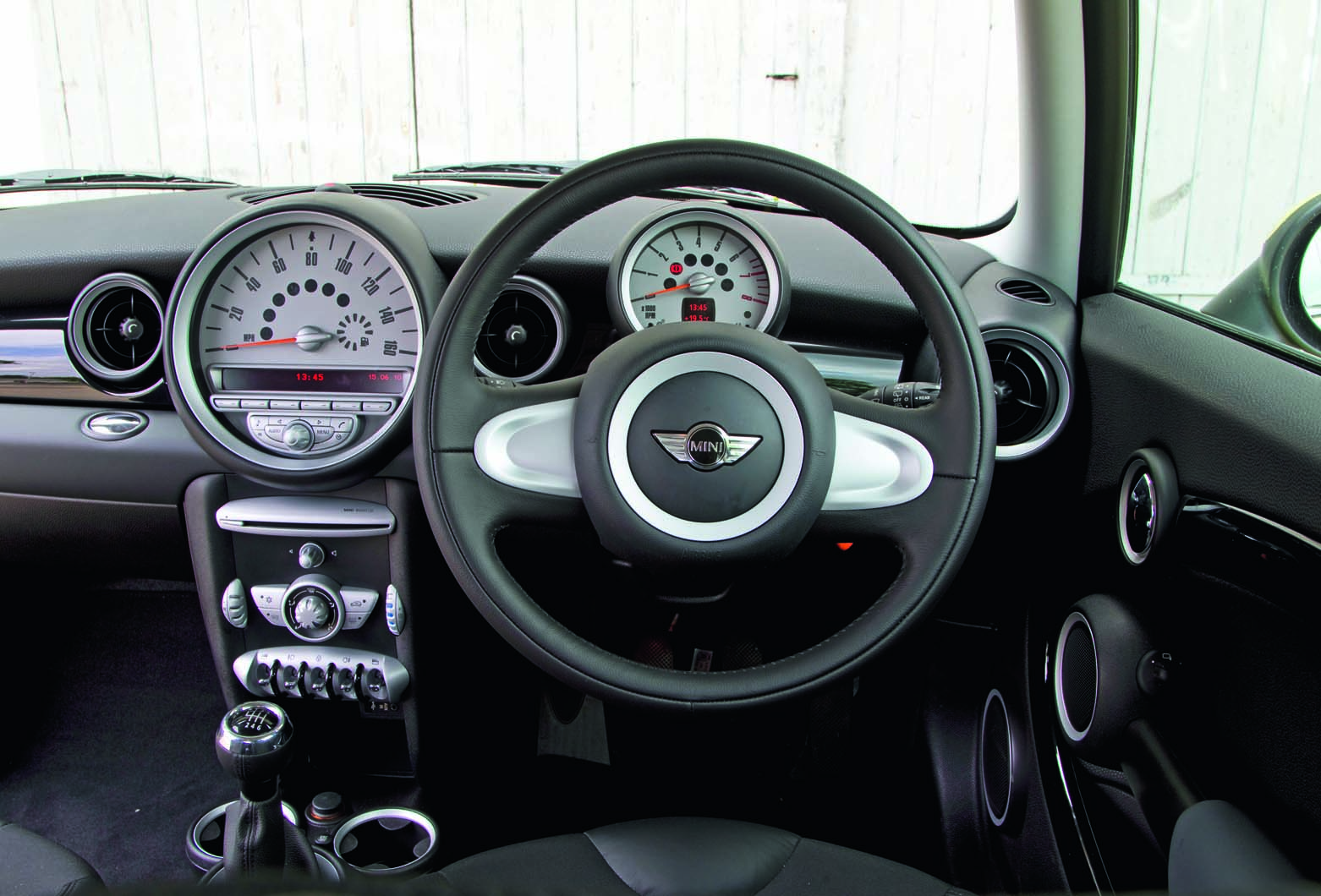 TIMING CHAIN - The timing chain, or more specifically the tensioner, is the weak spot. Keeping the oil topped up is vital but ultimately poor design is to blame. A rattle and brushing noises at idle from cold is the tensioner’s ‘death rattle’.

COOLANT SYSTEM - Look for cracks on the plastic coolant thermostat housing. Check if the water pump has been changed; it’s best done at around 50,000 miles. Check the plastic lower radiator support – it’s prone to kerb damage.

TRANSMISSION - Check the clutch operation – failure as early as 20,000 miles isn’t uncommon. Worn synchros are rare so graunching suggests seriously hard use. Feel for a harsh shift on autos, often caused by a faulty valve body which could require a rebuild or replacement of the gearbox.

SUSPENSION AND BRAKES - Check the front wishbone bushes, which have to work hard. The anti-roll bar bushes have an easier time. Earliest R56s are 12 years old and the suspension, while sophisticated, isn’t the most adept and will probably be in need of a refresh. For less than £1000, you can replace wishbone bushes, springs and dampers with upgraded polyurethane bushes, Koni shocks and Eibach springs.

£2300-£3495 - Launch cars with around 100k miles, generally good histories and in serviceable condition. 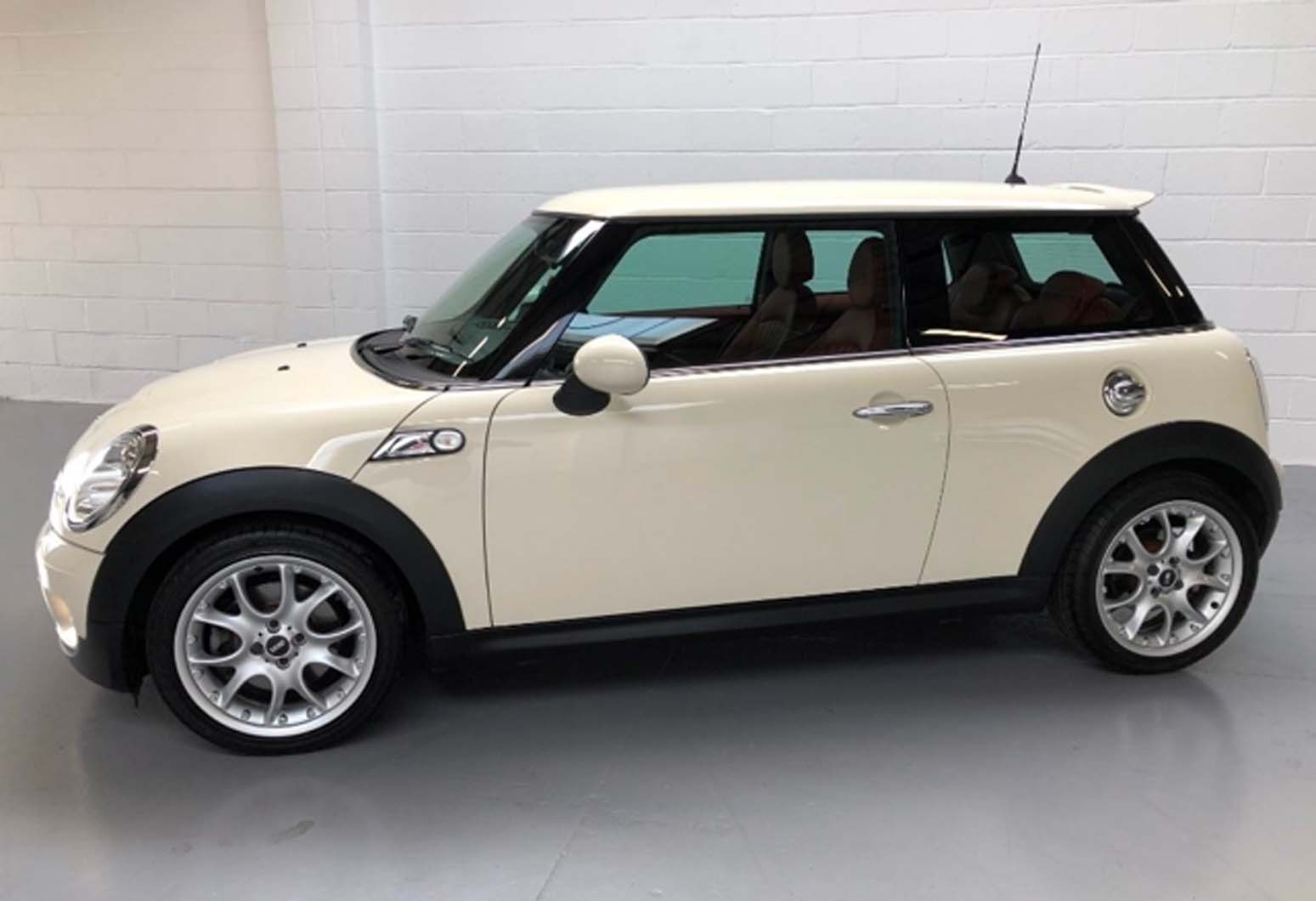 MINI COOPER S, 2010/10, 45K MILES, £6900 - Not only has this got the uprated N18 engine but it’s also the later facelift car with revised interior, fresh bumpers and LED tail-lights. Has full Mini history and eye-popping red leather too.

Mini could move some production out of UK after Brexit

My wife had the Cooper SD

My wife had the Cooper SD version of this Mini. Strong punchy performance (ignoring the torque steer) and great economy. But, not the easiest to drive at speed flowing through corners on a country road - a bit too skittish, certainly. I also had the pleasure of driving it back from Devon to home which is a 6 hour drive....albeit doing it quite quickly, I was knackered at the end of it! I had an '03 Cooper S a few years ago and although this is more comfortable all round, I couldn't dream of owning either these days....other cars do a much better all-round job! Trust me.

my sister owned a 2009 cooper and now a 2014 cooper.  Both have a horrifically hard ride and unsupportive seats that give me a sore back over longer journeys.  The 2009 model also had a number of problems - boot lock mechanism failed so you couldn't open it, aircon failed, clutch went at a low mileage and paint peeled (this was at about 4 years old).  The newer one feels more solid and isn't so mean with spec but still strikes me as overrated.

interestingly I used to own an Alfa Mito which was slated in comparisons for its ride.  On my models 17 inch alloys it had a much better ride, although admittedly not exactly a magic carpet.  The Mito also had more performance for a lower price, lovely comfy seats, well equipped and you didn't pass one every 3 seconds.

None of its tyres were run flats.  Summer wheels were 17", Winters 16", all tyres same rolling circumference so I could make the direct comparison - winters were infinitely preferable.  I agree that Toyotas are dull as ditchwater and instead drive a 1986 Carrera 3.2 which I hope you might accept provides plenty of steering feel.  Kindly keep your insults to yourself next time please.

Not all Toyotas are as dull as dish water, the yaris grmn is apparently great fun if ridiculously priced, gt86, one of the best drivers cars out there, all the mr2s have been fun as have celicas, as have a lot of corollas etc. Epas doesnt appear to be great on any car really, even porsche epas systems arent lauded by motoring journos.