BACK TO ALL NEWS
Currently reading: How to put an electric car on your driveway for as little as £900
UP NEXT
New Volkswagen Golf R 20 Years is most powerful production Golf

It will require a little bit of education, and some skills with a spanner and a MIG welder, but in theory you could have an electric-powered BMW, for example, on your driveway for under £1,000. The company behind the scheme is called New Electric, a Dutch-Irish firm whose primary corporate task is converting big corporate vehicle fleets to electric power.

It has an offshoot, though, based in Arklow, in County Wicklow, just south of Dublin. Here, the emphasis is not on big fleets nor corporate largesse, but on converting perfectly good petrol or diesel cars, which might otherwise be scrapped, to electric power.

“When we started this, back in 2008, it was all bespoke. Every car we did was like starting again,” explains Kevin Sharpe of New Electric. “Now, it’s getting to the point where it will be a bolt-in solution for many vehicles. We want to get to the point where it’s like a giant Meccano kit. That’s where we're aiming, because if we want to do this at scale, we have to make it incredibly simple.” 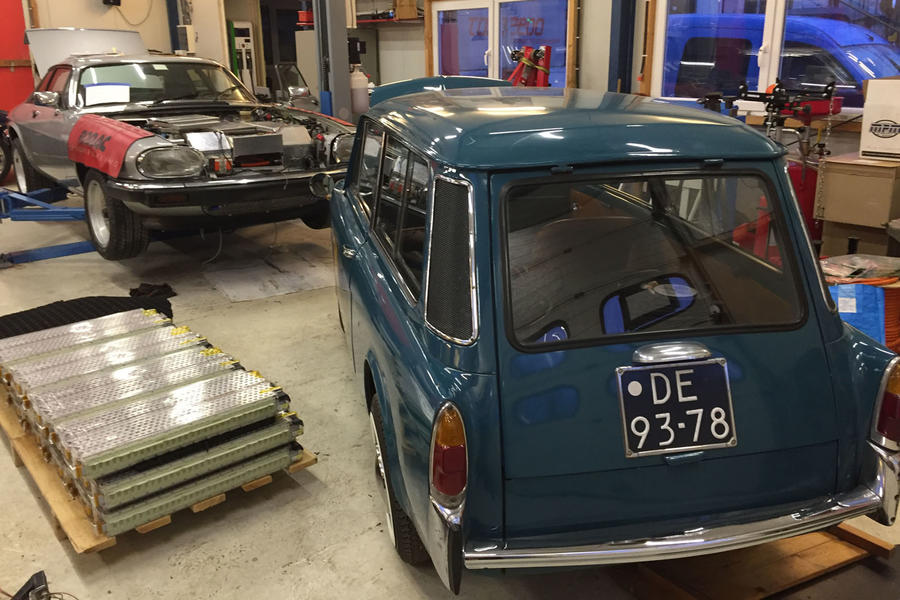 Sharpe’s mission is to take good quality cars that are, for whatever reason, headed for the scrapper and mate them up with batteries and motors from crashed or written-off electric cars. Instead of having a Nissan Leaf or a Renault Zoe parked out front, you could have a Lexus GS, or even a BMW 850i (only without the ‘i’ bit).

“It comes from marine technology, originally. It’s quite a normal thing to do in a marine environment, people upgrade boats all the time. It’s not unusual to see a hull that’s 100 years old with a new engine, and we wanted to start doing the same thing to cars,” says Sharpe.

New Electric can either convert a car on your behalf, or teach you how to do it. Classes were booming, pre-lockdown, and Sharpe has plans to start them up again as soon as it’s safe to do so.

“What we definitely want to do is scale this up to a massive size,” says Sharpe. “There are so many cars that are being scrapped before their time. We recently bought a Lexus GS450 hybrid. It cost us £500. It's absolutely immaculate. It was basically being written off because it had a battery problem. But you can remove the internal combustion engine.

"You can then apply some magic to it, which allows you to reuse the two motors that are in a hybrid drivetrain, rather than the single one that's normally used, and all of a sudden you have a 300bhp fully electric drivetrain. Then you can even go a stage further. You sell the internal combustion engine, you sell the catalytic converters. You can sell the old battery which can go up for solar storage. So you could actually end up with a car for free and some cash in your pocket that you can then invest in the electric conversion.”

So, just how cheap can an up-cycled EV be? Well, of course there is the opportunity to spend as much as you like, but Sharpe reckons that you can get a converted car on the road for about half the price of a family hatchback. “You can have a bolt-in kit that would give you 200-miles of solid range, and 250kW rapid CCS charging, for about £6,000. And remember that donor Lexus that we bought cost just £500 on top.”

It doesn’t even have to be that expensive. One of New Electric’s fans, Damien Maguire, recently converted an old BMW 3 Series to electric power for the princely sum of just under £900. To be fair, Maguire is a dab hand at this and was therefore able to do all the work himself, saving any labour costs, but it still goes to show just how potentially cost-effective converting your car to electric driving can be.

What about getting insurance on the car once it is converted? Easy? Possible? Horrendously expensive?

I haven't had a chance to look thoroughly into the EV cars being more polluting for 50k miles, but economically EV car would be more expensive for the first 50k miles.

The cheapo hatchback that I brought for £10k with 70k miles would cost me £10k fuel, it is at this point that an EV would start saving me money, after 7 years of ownership. The hatchback still has perhaps another 7 years left in it, with very little repair bills (being a manual). The most expensive item to go would be the clutch. But what of the 7 year EV, what expensive items can we expect to fix?
Hoping some day that a sub £15k EV will be available with 200miles range, that would win it for me, and definetly would love to see an improvement in infrastructure!
CliveC8888 27 June 2021

Agree with Carmad3 comments about a British University being involved in exhaust treatment for diesels - and with several million diesel vehicles currently in use across the UK, Europe and USA the impact on the environment of scrapping these cars and replacing with new ones is going to involve far more pollution than if the diesel vehicles had SCR treatment retrofitted - at a cost of about £1,300 to £2,500 per vehicle surely this must be a good bet for exhaust manufacturers ?