BACK TO ALL NEWS
Currently reading: Used car buying guide: Vauxhall Calibra
UP NEXT
Quarter of UK cars produced in April were electrified

Sharp-suited, quick, cheap to run and tipped to rise in value, the 1990s Calibra has come of age, and now's the time to buy
Open gallery
Close

Here it is, then: the 1990s Vauxhall you didn’t know you wanted, until now. Not only is the Calibra much more affordable than the Japanese cult classics with which it was originally designed to lock horns, but its humble Cavalier-based underpinnings mean it’s also a relative cinch to maintain.

At its 1989 launch, the Vauxhall Calibra – penned by the recently departed Erhard Schnell, an Opel designer of nearly 40 years – was the most aerodynamically efficient car money could buy, a title it retained until 1999, when Honda’s Insight arrived. Its sharply styled wedge-shaped profile remains a big factor in its desirability, especially compared with its bulbous Ford Probe rival.

The coupé, famed for its unusually usable rear seats, could be specified initially with a 2.0-litre 8v four-cylinder pushing out 115bhp or, for the more sporting-inclined owner, the 16v Cosworth-designed ‘Red Top’ unit that bumped power up to 150bhp. The less powerful unit – also found in the Astra GTE and Cavalier SRi – could actually be an overlooked gem, with enough grunt to raise an occasional eyebrow and cheaper running costs than the 16v. 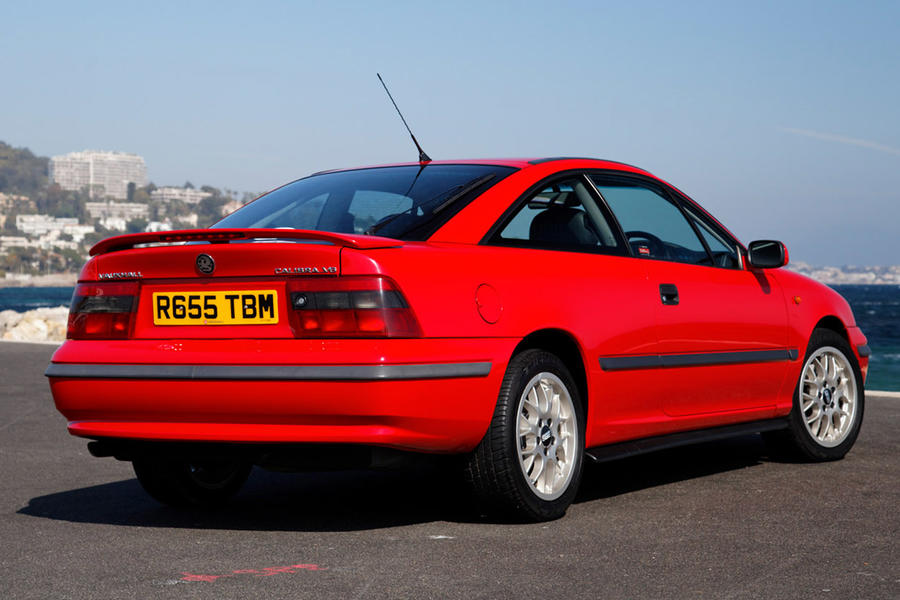 But there was more to come. In 1992, the more potent motor gained four-wheel drive and a significant 54bhp boost – courtesy of a newly added turbocharger – which made the top-rung Calibra capable of sprinting from zero to 62mph in six seconds and on to a top speed of 152mph. That’s sports car quick, even today, and you didn’t have to wait an eternity for the power to be delivered in one lump sum, either. The Calibra Turbo was revered for the smooth nature of its acceleration, relatively unimpeded as it was by the lag that dogged many a turbo four of its era.

Sadly, this variant didn’t set the showrooms alight and it’s the less powerful, naturally aspirated 2.5-litre V6 option, introduced in 1993, that is most common in the classifieds today. With just 168bhp on tap, it wasn’t quite as quick off the mark but won acclaim for its superior refinement and durability. Contemporary reviews praised the efficacy of the electronic traction control system – hot stuff in the early 1990s – and user-friendly interior, but they largely pointed speed seekers towards the racy 16v Turbo.

There’s currently a decent variety of Calibras on the market, with prices ranging from less than £1000 for tatty 8v cars to around £8000 for low-mileage, showroom-spec Turbo models. Calibra owners are a friendly bunch, too, and will provide guidance and advice through various forums and social media groups.

As with most cars of its era, the Calibra was an undesirable budget banger up until relatively recently, so many have been driven hard and poorly maintained. A chunky stack of MOT and service history receipts is something you should insist on if you want to profit from the inevitable hike in prices down the line. 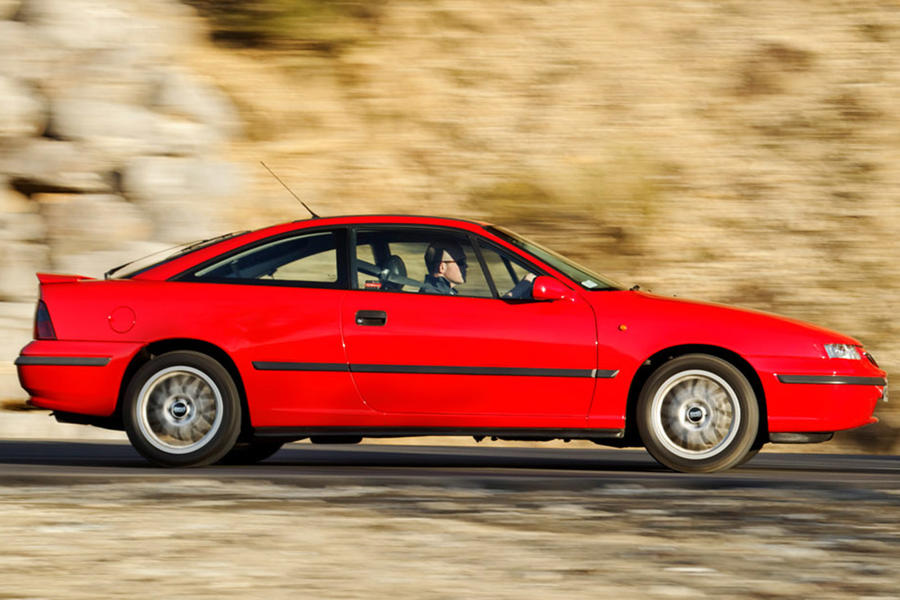 Tony Barton, Vauxhall Calibra Owners UK: “Some say the Calibra was ahead of the times when it first appeared, which is probably why it holds up well today. Early cars suffered with rot but, in 1995, they produced fully galvanised shells, which have stood the test of time. For a car only 30 years old, its numbers have dwindled significantly and they are becoming very rare now. Prices are rising because of this, but you can still pick up a nice example that won’t break the bank.”

■ Body: Check the bulkhead around the steering rack mountings for signs of cracking, which will make itself known through shaky steering and a grinding rack when the car is stationary. Otherwise, it’s more solid than you might think. Rear arches can bubble up and plastic trim sometimes hides nasty surprises.

■ Interior: Blocked drain holes can cause the boot floor and spare wheel well to corrode. A leaky sunroof will result in a stained, warped headliner. Switches and motors can fail but Cavalier-sourced parts are easy to find and cheap to buy. 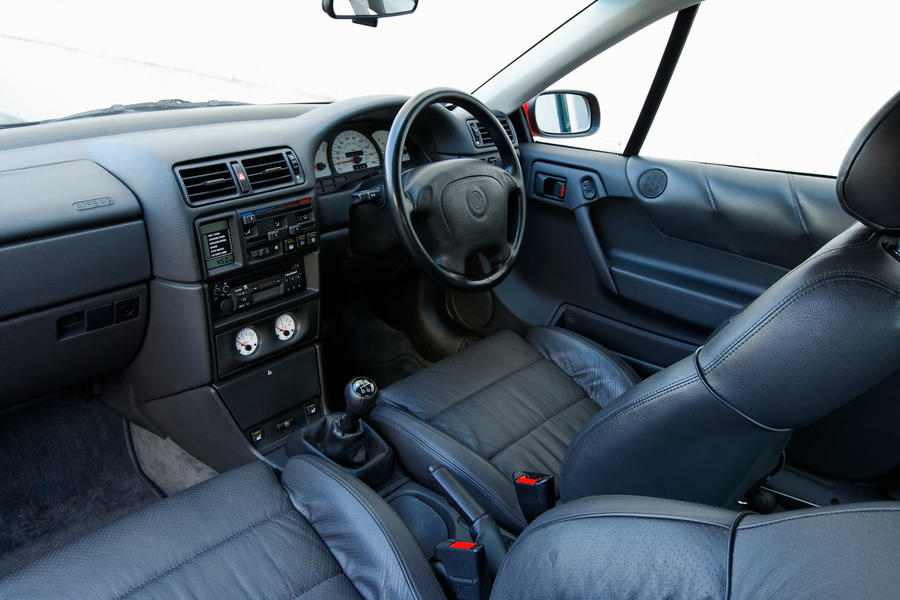 ■ Engine: Turbo motors need regular oil changes. If you can see blue smoke at idle, it’s likely to be caused by a worn seal. The entry-level 8v is a tough motor, but the 16v ‘Red Top’ is notorious for its propensity to throw a head gasket and sensor issues plague the later Ecotec engine. The coveted 2.5-litre V6 doesn’t work as hard but spark plug changes are tricky, so make sure they’ve been carried out as needed.

■ Gearbox: The 4x4 car’s six-speed Getrag manual gearbox is prone to failure and costly to replace. At the time of writing, there was only one F28 unit for sale online, a brand-new item priced at £3600 before shipping costs from Greece. On all models, the gearlever cover is prone to wearing, which could let dirt into the shifter mechanism. Uneven tyre wear creates a build-up of heat that can destroy large parts of the drivetrain over time, so it’s best to rotate them every 3000 miles.

■ Suspension, steering: Wallowing through corners is a sign that the dampers need replacing. It’s likely that a loud knocking noise can be traced to a worn-out front drop link.

Calibras of any calibre carry a certain exclusivity nowadays, but one of the most desirable variants is the limited-run DTM edition, of which just 250 were made. They rarely crop up in the classifieds, but be on the lookout for the special edition’s white BBS alloys, yellow and grey interior and rear spoiler as prices are sure to skyrocket. 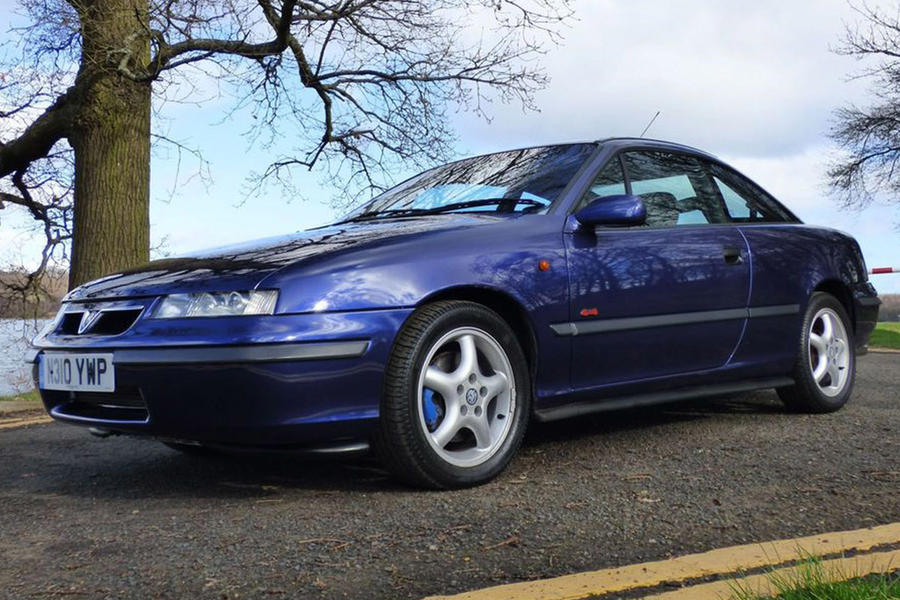 Jesus Felix, more mistakes - the Calibra was styled by Wayne Cherry as well and it was only the 8v that was the worlds most aerodynamic car (0.26) at the time, the wider tyred 16v and V6s were 0.29. Its still pretty good looking today, but GM europe has never been able to make decent handling front drive cars, so it drove like sh*te back then, as countless roadtests from the time say, dread to think how it drives today. Best loked at and not drived really.

Jesus Felix, more mistakes - the Calibra was styled by Wayne Cherry as well and it was only the 8v that was the worlds most aerodynamic car (0.26) at the time, the wider tyred 16v and V6s were 0.29. Its still pretty good looking today, but GM europe has never been able to make decent handling front drive cars, so it drove like sh*te back then, as countless roadtests from the time say, dread to think how it drives today. Best loked at and not drived really.

A cracking looking car, back

A cracking looking car, back then there was so much choice of interesting non premium brand coupes, this and the probe obviously but as well you had the probes sister car the mx6, and the mx3, Volvos 480, VWs Scirocco and corrado, Honda's prelude and crz, Nissan's 100,200 & 300, Toyota Celica and MR2 and paseo, Hyundai's coupe,and a bit later the vauxhall tigra and ford puma. What do they all offer now, SUVs pretty much.
Sulphur Man 8 June 2020