BACK TO ALL OPINION BLOGS
Currently reading: Hot hatches, saloons and roadsters - my favourite used Vauxhalls
UP NEXT
Matt Prior: No Nissan Z Proto is one way to encourage EV adoption

Although the Griffin badge might not be quite as desirable as German rivals, there are some awesome motors in the manufacturer's back catalogue
Share
Open gallery
Close
Share story

Vauxhall's isn't the sexiest badge in the company car park, which is a shame. Remember the exciting GTE and Sri variants?

Also, for the time, the Nova and Astra GTE. Oh, and there was the Lotus Carlton and the VX220.

Vauxhall, then, really is a manufacturer of contrasts. So let's look at its mixed bag of often rather wonderful used cars.

Although large rear-wheel-drive saloons can be bought with all sorts of posh badges, we think that the traffic cops had it right in their big white Senators and Omegas with the blues and twos. It’s a big old barge that's very forgiving and always feels safe. In top trim it is extremely comfortable and the estate is massively practical.

Thank heavens for the real men Down Under who created the primeval Monaro, an unapologetic throwback to a simpler age. Vauxhall officially imported (though never type approved) the original 5.7 V8 LS1 model. There was also a limited run of a more powerful VXR version. In 2005 a VXR version with a 6.0 LS2 V8 and uprated suspension arrived.

It’s a long Vectra with a massive 2830mm between the front and rear wheels. So legroom isn't an issue, especially with the FlexSpace system. In seconds you can fold the rear centre seat away to create an even more spacious four-seater and then individually slide the two rear seats back by up to 130mm, creating 985mm of legroom. Not only that but the seats also recline to a highly amenable 30deg angle.

The VX220's 2.0-litre turbocharged unit tugs the lightweight body along so that it gets to 60mph in less than five seconds. The gearbox is well matched, too, being usefully slick and helping to power along the car whether it's tackling twisty country lanes or just cruising on the motorway. You should still get around 30mpg overall, which is pretty good for a car that delivers almost supercar levels of handling and performance.

Hugely comfy, safe and great value. Ex-fleet and company cars that have seriously depreciated over the past few years make huge sense as a value family car. Vectras are at their most economical with the 2.0 DTi, which is able to deliver a decent 47.9mpg overall. For some, though, the best used buy for those not pounding up the motorway will be the 1.8 Elite. It is all the car you will ever need.

Hot Hatches in the shape of the GTE and Sri were something Vauxhall did really well in the 1980s. Then they seemed to forget all about them, until the dramatic arrival of the Astra VXR. It’s a sports hatch with a 2.0 16v turbo engine that will help the car to hit 60mph in just 6.2sec and push it on to a supercar-bothering top speed of 152mph. Unlike a supercar, though, it will return 30.4mpg and it costs a lot less to buy. 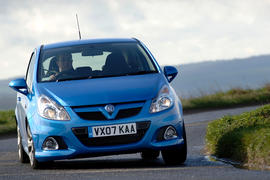 The Vauxhall Corsa VXR is accomplished, refined and quick, but it can’t match the Clio’s sheer panache

So what is your favourite Vauxhall and which are the groovy ones that you have owned?

What did you mean about the

17 February 2015
What did you mean about the Monaro not being type approved? Where sales sold as 'personal' imports? Strange!

The Omega, especially in facelift form, took over from the likes of the Rover 800 as ministerial transport, still have a certain elegance. Vauxhall took the mantle from Ford when buyers shunned the Scorpio.

Vectras are 10 to a penny, and even early Insignias are cheap used options.

As a sheer wildcard, as a grey import from the republic of Ireland, is the Opel Astra H (mk5 Vauxhall Astra) in saloon form. The Astra is familiar, the 4 door version not so much, it has the elegance of a mini-Insignia with the running costs of the hatchback.

17 February 2015
When I was an apprentice at Capital Motors a Vauxhall dealer in Hornsey, north London, the Director (John Durdin) had a 30/98 which he occasionally raced. It was a huge 1920s type car similar to the Bentleys of that time and similarly expensive.
I was privileged at the time to work on it and we had to overhaul the engine - similarly huge! A 4 cylinder with pistons like dustbins.
This was truly a Sporty Vauxhall.

In the 60s all we got 'sporty' from Vauxhall were the VX 4/90, the Viva SL90, Brabham Viva and Viva GT. The 3.3 litre Ventora came in the late 60s and I loved having them on my Budget Rent-a-Car fleet.
Oh, and in the 70s we had Firenzas on the Budget fleet-yes, really!.

When will this site be fixed?

17 February 2015
Outrageous that this site has still not been fixed. Is nobody at Autocar paying any attention to all the user comments? Appears Autocar don't give a sh*t!!!

When will this site be fixed?

17 February 2015
Outrageous that this site has still not been fixed. Is nobody at Autocar paying any attention to all the user comments? Appears Autocar don't give a sh*t!!!

They have probably seen...

18 February 2015
the revamp of the Car Magazine website and decided not to bother until it becomes pay to view like Autosport.

17 February 2015
That now leaves 5 comments to go until they are sent into the ether!!!

Opel Monza. Alright so it was

18 February 2015
Opel Monza. Alright so it was an Opel, not a Vauxhall, but they were/are the same thing. Large, comfy, luxury GT with a 3 litre v6 and good looks.

Oh and, I'm totally with 'erly5'. The ridiculous length of time to fix the comments page issues has long gone past the point of being embarrassing, certainly for a nationwide (and internationally available) magazine. It feels more like this website is being run by a bunch of skint and clueless amateurs.

In my car history I owned a

19 February 2015
In my car history I owned a Cavalier SRI 130. And I mean the proper MkII one in Glacier White and white alloys! It was a beast. Loads of torque (according to the advertisement guff, Vauxhall claimed it produced more torque that a BMW 635CSi! It used the engine from the Astra GTE but was able to extract an extra 6php to give it 130bhp, which in 1988 was a lot of horses for a car in its class.

Mine had no power steering so parking was a mare but for a 25 year old it was a proper good hooligan car!

By the way, I think they have

19 February 2015
By the way, I think they have fixed the problem with the comments page issue now. Only took 'em 2 months...

I also would choose an OE 30