Mercedes’ first compact car generated a lot of excitement back in 1998. The innovative A-Class is now a hidden bargain on the used market
Share
Open gallery
Close
Share story

If you weren’t around in 1998, you will find it hard to imagine just how excited the car world was at the arrival of the original A-Class, Mercedes-Benz’s first Volkswagen Golf-sized hatchback.

The year before, there had been the infamous elk test, when early cars had tipped over while swerving, and the expensive rectification work that followed. However, with all that behind us, we looked forward to experiencing the new model and discovering how Mercedes had managed to give its compact car the cabin space of a C-Class saloon.

Not only that, but we also wanted to see how it had shoehorned the engine under the floor to improve occupant safety in a crash and how it felt to sit so high. We also wanted to try our hand at sliding and even removing the car’s individual rear seats as well as its front passenger seat. That’s right: the A-Class could go from miniature luxury car to single-seat van in moments.

The elk test was a blot on the car’s copybook but at least it meant that for the fix, the A-Class got a truckload of valuable safety kit as standard.

This included electronic stability programme (ESP), traction control, braking assistance and six airbags. Initially, there were three engines: 80bhp 1.4-litre and 100bhp 1.6-litre petrols and an 89bhp 1.7-litre direct-injection diesel. The 1.4 was available with a five-speed gearbox or a clutchless manual, which was replaced in 1999 by an automatic.

Today, petrols outnumber diesels. That suits us, given the scare stories concerning the latter, in particular their glow plugs’ tendency to seize. Automatic models get bad press, too.

A 123bhp 1.9-litre petrol arrived in 1999. It was available with the poshest trim, Elegance, while the remaining engines were offered with Classic and sportier Avantgarde trims. The latter also added a full-length sliding sunroof that hasn’t proven to be the most watertight. 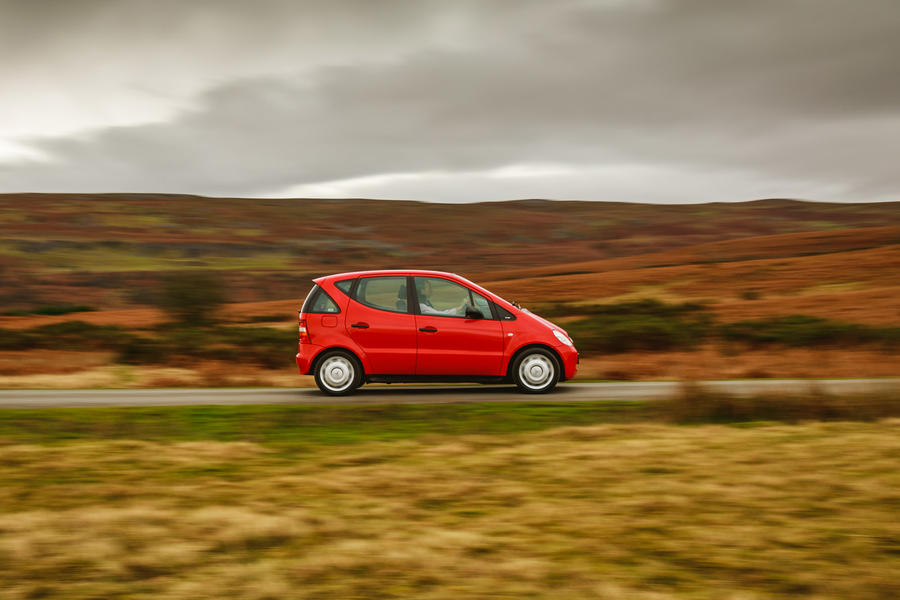 A facelift in 2001 brought restyled bumpers and a 94bhp 1.7-litre diesel engine. Also at this time, a long-wheelbase version arrived. A year later, the A210 Evolution landed with a 138bhp 2.1-litre petrol engine. (This is rare today, although we did find a 95,000-miler that sold recently for £1500.) At the same time, Classic SE trim joined the range, adding air-con – a feature that Avantgarde trim now also enjoyed at the expense of that sliding roof.

From the off, every trim got electric windows, while Elegance added alloy wheels and Avantgarde leather seats. Of course, all this detail is useless if the A-Class you’re looking at is a bag of nails – which, to be frank, it most likely is. London-based A-Class specialist Nersess Der Nersessian says that it was never the car’s fault, rather technicians without the training or the tools to maintain an A-Class properly. “The first thing you should do when considering buying an A-Class is to find a good mechanic who understands them,” he says. We’ll second that.

An expert’s view - Nersess Der Nersessian, Forrera: “When the A-Class first came out, everybody wanted one, but a couple of years later, I began hearing stories of many of them being scrapped. I wondered why, so I started working on them. I soon realised that it wasn’t the cars at fault but the people working on them. Owners love the A-Class. It’s roomy, practical and, above all, easy to get in and out of. I have a bad back and so do many of my older customers, so we find the A-Class a dream.” 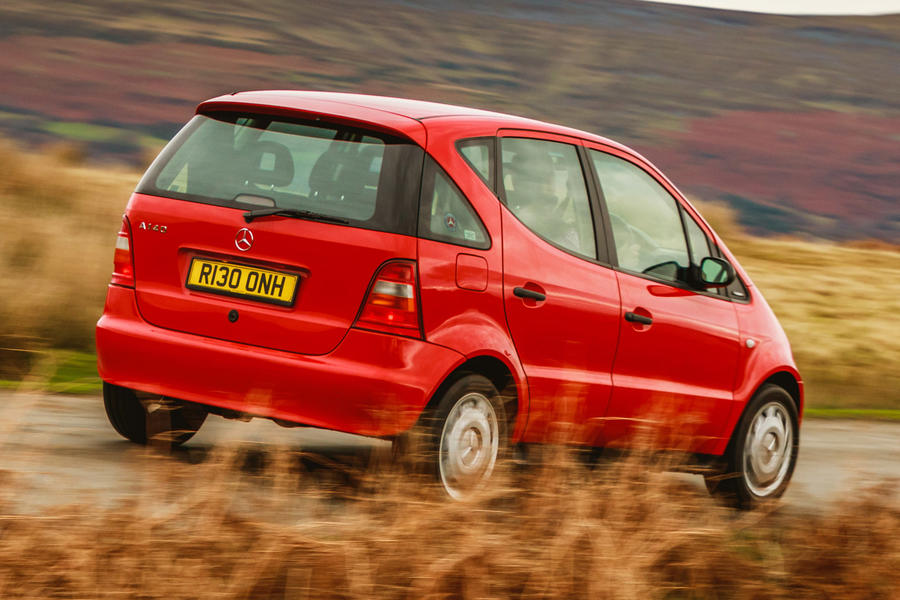 Engine: Check old invoices, if they still exist, for work done, paying attention to small but vital jobs such as spark plug, fuel filter and pollen filter changes. A rubbing sound at tickover might signal that the timing chain is about to snap. On diesels, check the glow plugs aren’t seized and impossible to remove.

Electrics: A low-mileage car might have had to be jump-started several times during its life when its battery was flat. Unfortunately, this can cripple the various ECUs, especially the one for the automatic gearbox (where fitted), so check there are no electrical issues.

Transmission: On an automatic, check for first-gear selection problems. Typically, drivers don’t allow the gearbox oil to warm up and consequently the high oil pressure breaks some of the parts. The letter F being displayed on the dashboard means the automatic gearbox is shot.

Steering, suspension: Perform a three-point turn while listening for strange noises from the steering pump. The A-Class is heavy, so check the condition of the rear springs. They often break but are cheap to replace. Ditto the front suspension, except the whole assembly (shock absorber, spring and top mount) will need to be changed.

Body: Corrosion is especially common around the leading side of the rear wheel arches.

Interior: Check the seats slide, fold and can be removed. Make sure the air-con blows cold, although expect the system not to have been serviced for years. Glowing brake and ESP warning lights are easy to fix and not necessarily an indication of actual system failure. 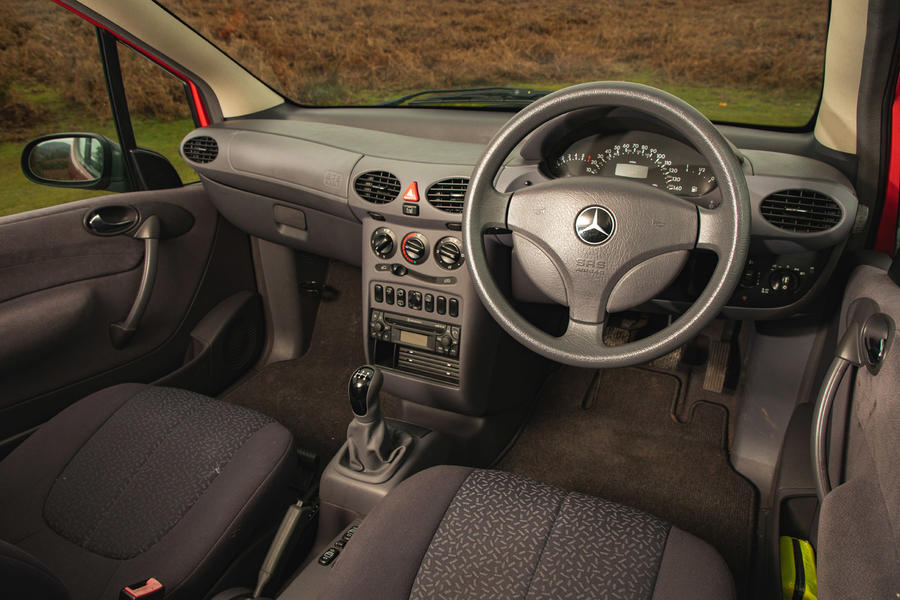 Also worth knowing: For a car that has all but vanished, there’s plenty of technical support, most notably at aclassinfo.co.uk. There you will also find a buying guide with some useful information. You will also find some helpful technical videos at forrera.co.uk and advice from current owners at mbclub.co.uk. 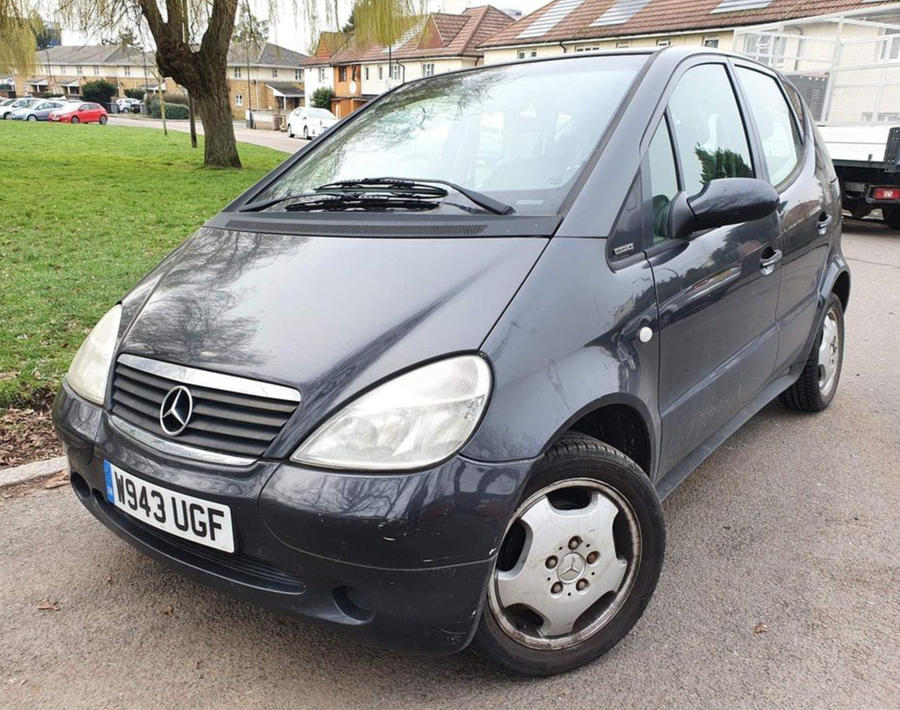 2000 Mercedes A160 Elegance, 70,000 MILES, £1000: This is a one-owner car with full service history (not that that necessarily means anything). It has a full cream leather interior and, says the dealer, “drives superb”. It’s a manual so likely less problematic than an auto. Sadly, its alloy wheels are battle-scarred.

In A-Class of its own: Revisiting the original Mercedes A-Class

If ever a car was ripe for an EV conversion it should be the A-Class, rip out the problematic engine and gearbox, and throw in an electric motor and batteries in the sandwich, surely it cant be that difficult.

I have had one, LWB restyling, A170CDI Classic Automatic with full leather interior. I have loved it to bits. Fantastic packaging, no other car - including the 2nd gen that followed and the B-class - could offer so much interior space on such a small footprint. I have absolutely loved it. Shame about the fragile auto'box.

This is the worst car MB have ever made. Apart from mechanically failures most of them have rusted away. Absolutely dreadful and really hurt Mercedes in terms of perceived quality. The unique double floor concept was soon forgotten by MB, todays A Class is just another family hatchback. Who on earth would want an original.

... and really hurt Mercedes in terms of perceived quality.

I don't think it did - Mercedes got away with it, something that has annoyed me ever since.  If it had been a British or Italian make, it would have been lambasted in the world press for ever!

... and really hurt Mercedes in terms of perceived quality.

I don't think it did - Mercedes got away with it, something that has annoyed me ever since.  If it had been a British or Italian make, it would have been lambasted in the world press for ever!

For British and Italian manufactureres, it is a rule rather than an exception