The MX-5 sweet spot for fun, usability and value is a Mk3
Open gallery
Close

Some are born great, some achieve greatness and some have greatness thrust upon them. The Mazda MX-5, you will recall, hit the ground running, so instantly iconic that it seems weird now to think that there was a time when it didn’t exist.

It turned out to be, over its four generations (so far), the ultimate real-world enthusiast’s car and the biggest-selling two-seat sports car of all time. Oh, yes, of course, there were other dainty drop-top two-seaters that came before it and some that came after it, but this delightfully simple and properly screwed-together roadster delivered a front-engine, rear-wheel-drive answer to more than a million people’s prayers.

You see, if you want affordable fun, the iconic MX-5 has always delivered in spades. The Mk1 car (the NA) was an analogue delight, the Mk2 (NB) a practical uptick, the Mk3 (NC) more refined and the latest Mk4 (ND) a dainty peach.

The answer to the question of which one to buy is probably that you really need one of each. However, presuming the budget allows only one, we would start by discounting the first two generations, because they’re now well stricken in years, so to find a good one means shopping very carefully. We would dismiss the Mk4, too, as a nouveau venu. That leaves us with the Mk3, and that’s good, because this is a car that’s definitely still a sound purchase and starting to look like really good value.

Launched in 2005, it was larger and heavier (by around 100kg) than the Mk2, but it offered more comfort and refinement. It was more powerful, too. Under the bonnet, you could choose between a 125bhp 1.8-litre or 158bhp 2.0-litre in-line four, the latter with variable valve timing and a limited-slip differential. 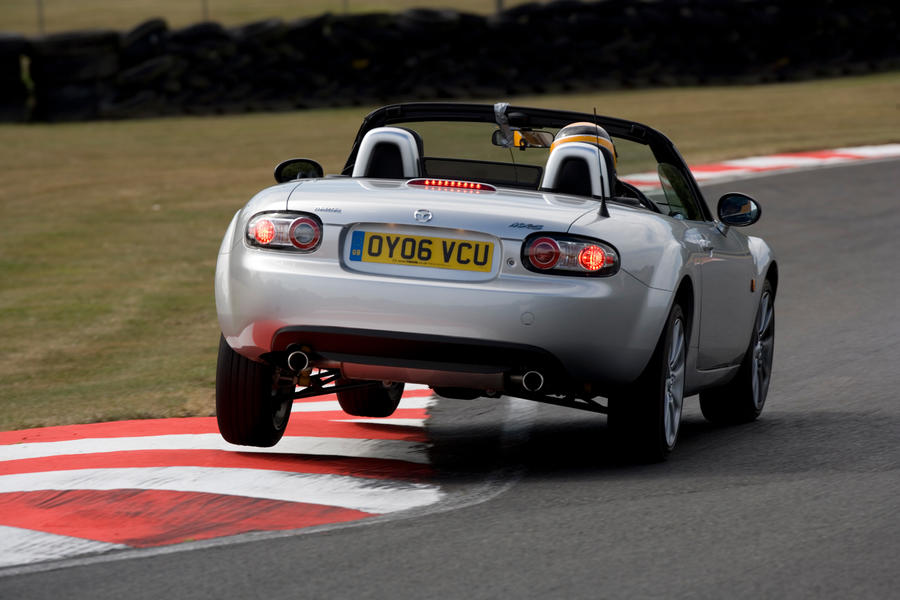 A slick five-speed gearbox was standard on both, but track down a 2.0-litre in Sport trim and it will have a six-speed ’box, as well as 17in alloy wheels, stiffer suspension, traction control and heated leather seats.

Unlike the previous MX-5s, this model was available in two different guises: the traditional soft-top roadster and a Coupé Cabriolet, which came with an electrically powered folding hard top that gave the refinement of a coupé but allowed you to get the wind in your hair at the touch of a button.

For most, the 1.8-litre model will be fast enough out on the open road, and slightly cheaper to run. However, if you want to make the most of the MX-5’s agile chassis, the 2.0-litre is a blast.

But straight-line speed isn’t what the MX-5 is about. What you will get for your modest outlay is what remains one of the best-driving cars available, regardless of budget. Both hard- and soft-top models are wonderfully agile. The steering is precise, while the chassis offers fluid handling with bags of grip. The ride is comfortable and controlled over broken surfaces, too, especially in the coupé, which has slightly softer suspension settings.

The range was facelifted in 2009, when it gained a revvier 2.0-litre engine and tweaks to the suspension, front and rear bumpers, door mirrors and some enhanced cabin trim. SE replaced the old entry-level trim, while Sport Tech superseded Sport.

A further facelift in 2013 brought changes to the front grille and lights and styling changes to the wheels, as well as such luxuries as sat-nav and standard-fit climate control. 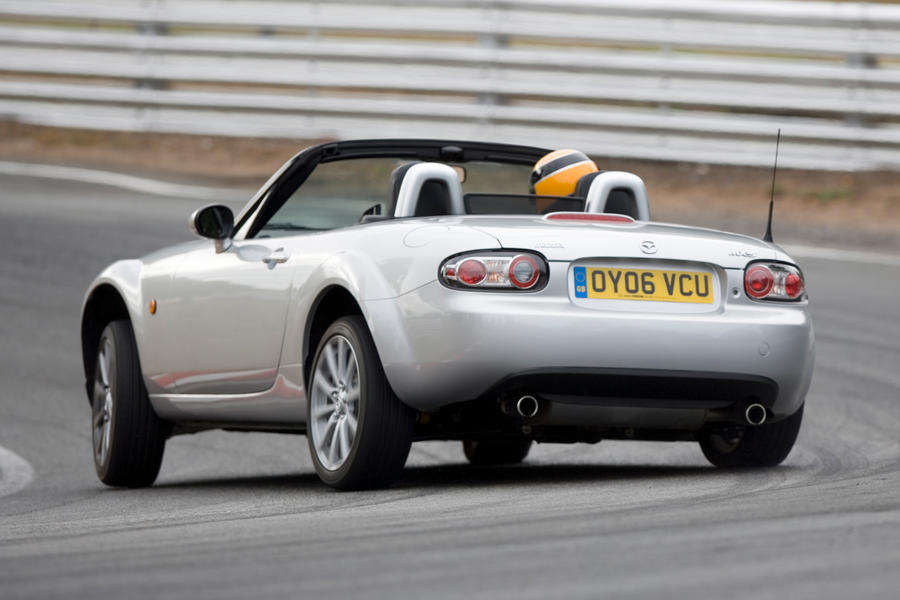 24 February 2005: “The MX-5 is still great fun, and more grown-up in this third (NC) generation. For pure driving pleasure, little else gets close. Driven hard, it rewards the driver with thrills at licence-friendly speeds, and it will improve your skills more in a week than a hot hatch would in a year. There are few cars that trade power and speed for entertainment, but the MX-5 is one of them. It’s also a more practical proposition than the old MX-5.”

Aidan Clegg, owner and specialist: “I’ve owned three NAs, an NB and, for the past seven years, an NC, which I like the most and have owned for the longest. It does everything the previous version did but in a more solid and grown-up way. The NA was pure and simple fun – always a pleasure and never a chore to drive. The NB was softer and more compliant. For me, though, the NC has the best bits of the previous versions with the maturity that comes with age… and a roof that retracts in five seconds, plus a cam chain that will probably outlast me!” 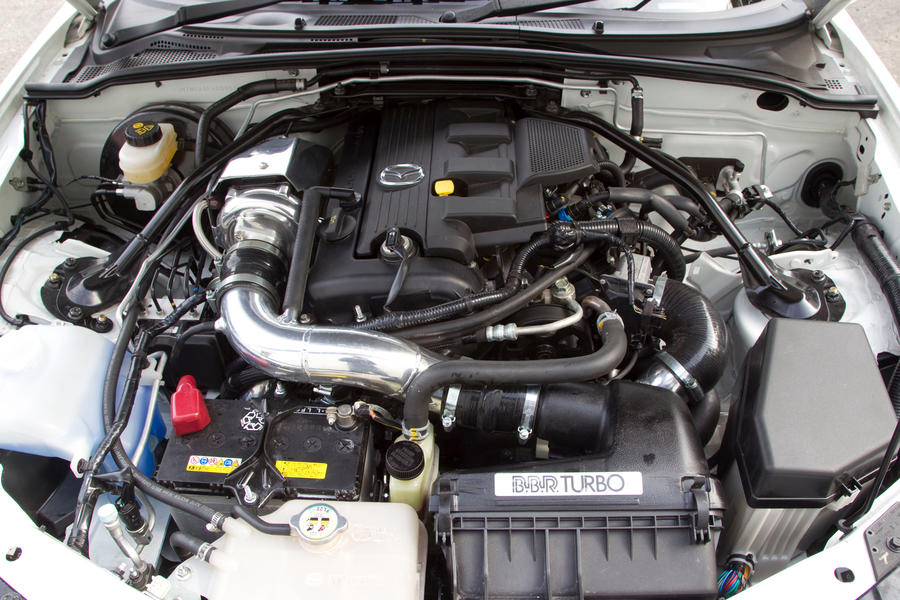 Engine: The engine is mostly bulletproof, but it’s vital to keep the oil level at its correct level, so check that first. Look for oil smoke and listen for any strange noises emanating from the crankshaft. Older, higher-mileage cars can suffer broken wires in the coil-on-plugs. It has a timing chain, not a belt, but the tensioner can fail.

Bodywork: MX-5s do rust, so go over it with a fine-toothed comb. Check under the bonnet, as well as the boot and chassis areas. Make sure the panel gaps all line up and watch for any overspray on bumpers. Check the clips securing the plastic panel beneath the wipers. They can channel water into the interior. Likewise, ensure the hood drain holes are clear and feel for damp carpets. Check the roof operation on early coupés.

Transmission: Expect the action on five-speed and six-speed gearboxes to be stiff from cold but to loosen up. Listen for any suspicious noises from the rear diff.

Suspension and brakes: Check the dampers. Listen for knocking from the front and rear anti-roll bar drop links, which last around 40,000 miles. Brake hard to check for pulling, because the calipers are prone to seizing. 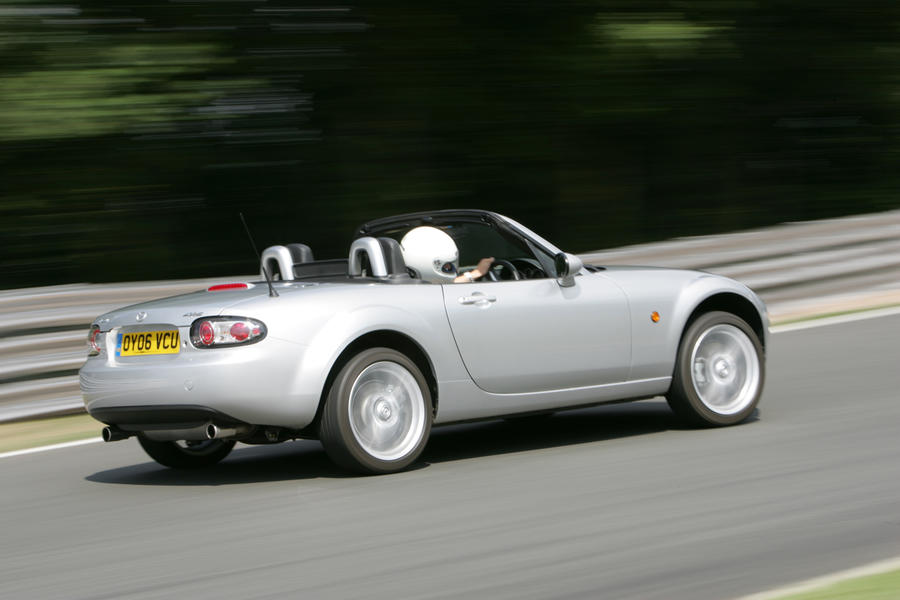 Whether you’re looking at a roadster or a Coupé Cabriolet, check the roof-folding mechanism and ensure that there are no signs of leaks, tears or damage. The Coupé Cabriolet’s roof can stick half-open, because of faulty position sensors.

Careless owners can leave the roof down in poor weather, so check for damp patches and water marks on seats and carpets.

Some owners complain of a strange buzzing noise from near the gearlever when the car is accelerating. Mazda says it’s nothing to worry about.

The wheels can be incorrectly aligned, so check for any signs of uneven tyre wear. 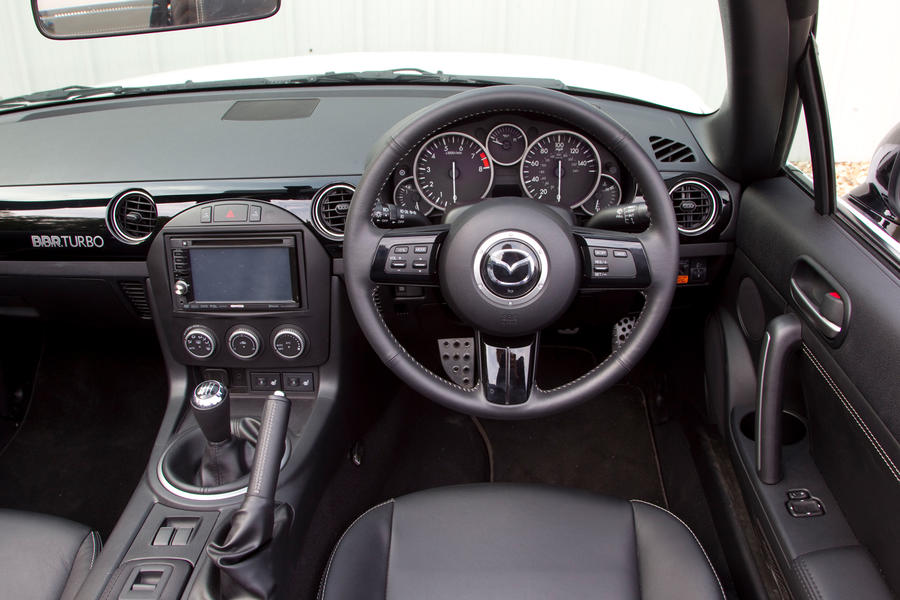 £4000-£6999: Plenty of tidy MX-5s available for this budget, including Sports, some with a good amount of history and sold with a warranty from a dealer.

£9000 and above: Take your pick of the later cars up to 2015 and the special-edition models. All should be in immaculate condition. 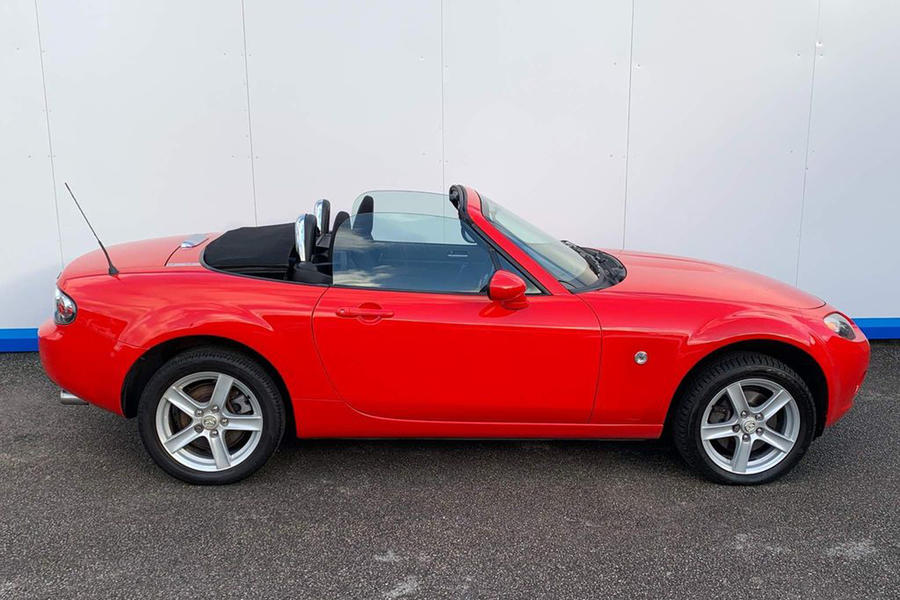 Mazda MX-5 1.8i, 2006, 75,000 miles, £3995: This rather delicious-looking, solid red MX-5 looks set fair for a bit of summer lovin’ and comes with a full service history and what appears to be great bodywork and an unblemished black cloth interior. It’s a 1.8, but what the heck? It’s still a terrific punt. Sold via a dealer and with a warranty, it’s in good condition and has had five owners.

The facelift cars have an uglier front grille (makes them easier to spot) but are much improved in every other way. Yet another Autocar used buying guide that reads like an hour's desk research and omits the genuine insight you really want.

I had my 2.0 2006 sport for 3.5 years as a weekend car and it was a fantastic. It was only on 89k miles when I sold it but it would use oil and I would be checking it every 2 weeks even though there was no smoke and no leaks. There are so many early NC's that burn oil and have ruined tapping engines from low oil. In the end the only reason I got rid was because they are no better than the mk1 and mk2 for rust. It was everywhere and it was garage stored and not used in the wet or salt through my ownership and it still got worse each year. The second gear can be incredibly nothcy and tough to get into when the engine is cold but this was the same in the 3 I drove before buying my own so a "charcertistic" apparently.

My advice is to get one as new as possible and get it undersealed if you want to keep it for a good few years. I really miss having a convertible every time it is sunny but I had an itch that needed to be scratched and I bought a freshly import DC5 Integra Type R. If I return in a few years it will be to the mk4 2018- with the 180bhp 2.0. The MX5 has finally got the power it deserves, although a bump to 220bhp is perfect in my opinion.

I can remember the Mk3 being severely criticised for putting on weight and that the Mk4 was hailed as correcting that mistake.

I think the truth is that the mk3 was a bit under developed at launch but got considerably better throughout its life. Autocar pushing one of the early ones here though...