This is an SUV for people who like driving – and love a bargain. We report
Open gallery
Close

While accepting many enthusiasts’ strong prejudice against the modern wave of SUVs, there are still some gems among them. Exhibit A: the Seat Ateca.

This car has been a huge sales hit since arriving in 2016, playing a big part in establishing Seat as a maker of fine SUVs. That success also meant prices on the used market remained strong while demand outstripped supply. Now, however, values are dropping and there is a staggering choice, so a used Ateca is an increasingly attractive purchase.

Seat’s first SUV is available with a healthy choice of engines, from a peppy three-pot petrol to a flexible mile-munching 2.0-litre diesel. And indeed, prices for these used diesels are remarkably low.

Click here to buy your next used Ateca from Autocar

The earliest Atecas start at £10,000 with lots of choice for the 1.0 TSI or 1.6 TDI engines – the latter of which is a real bargain for high-mileage drivers. Up your budget to around £13,000 and you’ll gain access to the best all-rounder and our pick of the range: the 1.4 TSI. But also in this price range – again, a good pick for a wily high-mileage driver – you can get hold of the 2.0 TDI. The 1.5 TSI (which replaced the 1.4 TSI) and 2.0 TSI petrol models were the most recent to join the line-up so they still demand the most money. You’re looking at around £20,000 to get one.

Entry-level S trim is pretty sparsely equipped, but SE adds enough goodies to make it the pick of the line-up. SE Technology is a company-car-focused trim, so expect to find high-mileage examples of this model in the classifieds. Sporty FR trim gets slightly stiffer and lower suspension – but rather than transforming this into a performance SUV, it just gives it a less comfortable ride, so we’d skip it. Range-topping Xcellence models get luxuries like heated seats and wireless phone charging, but are relatively rare and the priciest.

But whichever one you pick, it won’t take long to discover that the key to the Ateca’s appeal – and what sets it apart from run-of-the-mill SUVs – is the way it drives. There’s heft and directness in the electric steering, delivering the assured – even gently involving – driving style we’ve come to expect from virtually all MQB-based models, such as the Volkswagen Golf and Audi A3. Body lean is well in check through corners, it grips strongly and the ride strikes a fine balance between comfort and sportiness.

Line up test drives of an Ateca, Nissan Qashqai and Skoda Karoq and the Seat will be the clear winner.

You’ll be impressed by the interior quality, too. There’s plenty of soft-touch plastic on the dashboard and the infotainment is excellent, thanks to a crisp screen, shortcut buttons and intuitive software. To top it off, there’s lots of space all round and boot space is near the best in class. 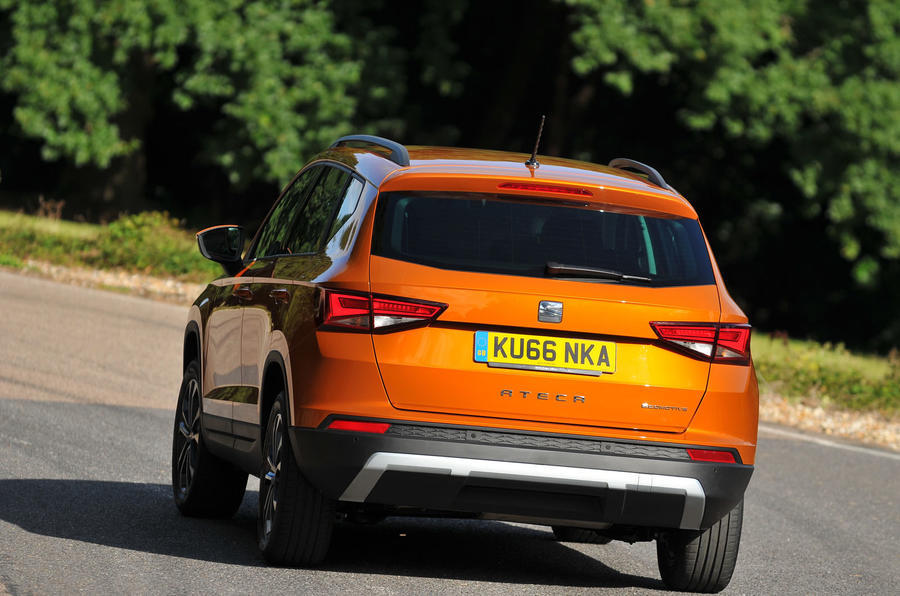 Engine If the car is fitted with the 1.5 TSI petrol engine, check there's no hesitancy and 'kangarooing' when pulling away from cold (this is a well-documented problem with some cars and a software update may be the answer).

Automatic handbrake Check it releases rather than continues to grip as you pull away.

Body The electric tailgate has been known to play up. Raise the issue with a dealer if your Ateca’s doesn’t work properly and the car is still within its three-year manufacturer warranty. Check the condition of the lower part of the rear doors near the wheelarches; they collected dirt and spray and if chipped, rust could take hold.

Interior Check the lane assist functions works; some owners have reported problems with it.

There has been only one recall so far – for rear wheel bearings that could crack. This affects cars built between 25 and 30 August 2017.

Seat Alhambra taken off sale but VW Sharan sticks around

Isn't the 1.5tsi that replaced the 1.4 the one that a lot of customers complain about low speed juddering?

Beat me to it Kat

Yep it did have COD and it's an impressive engine.