The Q7 is a classy, capable seven-seat SUV. And you can get one for under £10k
Open gallery
Close

Hagrid on wheels is how Autocar’s testers describe this generation of the Audi Q7. It’s hard to disagree, Audi’s once top-of-the-range SUV being big but not beautiful. Capable, too, thanks to its standard-fit, four-wheel-drive system, eight-speed automatic gearbox, air suspension and seven seats. And if you can equate having lots of standard comfort features to being likeable, then the Q7 is, again, a lot like Hagrid.

But enough references to bearded giants because the Q7 stands tall and strong enough on its own four alloy wheels (a choice of 19in or 21in, depending on trim). What’s more, it comes to the luxury SUV market offering a unique blend of peerless build quality, restrained but classy styling, decent road manners and stump-pulling diesel power, which, in the 4.2 TDI version, amounts to no less than 590lb ft.

The generation being reviewed here was launched way back in 2006. Then, petrol as well as diesel engines were offered. Later on, in 2008, an Audi Q7 6.0-litre V12 TDI diesel model joined the line-up. The first facelift (new grille, revised interior, a cleaner 3.0-litre diesel engine) came in 2009.

Click here to buy your next used Q7 from Autocar

However, it wasn’t until 2011 that the Q7 really came of age, with the deletion of all petrol variants and the bonkers V12 diesel, leaving behind a choice of 3.0-litre and 4.2-litre TDI diesels. It’s this final chapter of the Q7 story we’re interested in here.

The 3.0-litre diesel came in 201bhp and 242bhp outputs. If you’re content to go with the flow, then choose the 201bhp version, but for extra overtaking grunt and more relaxed cruising when fully loaded, you should take the 242bhp model. The key to its appeal is an extra 73lb ft of torque (for 405lb ft in total), which, when you’re talking about a car weighing around 2350kg, is not to be sniffed at. In any case, this more powerful engine dominates the classifieds so you’ll be spoiled for choice. Prices start at £9000. 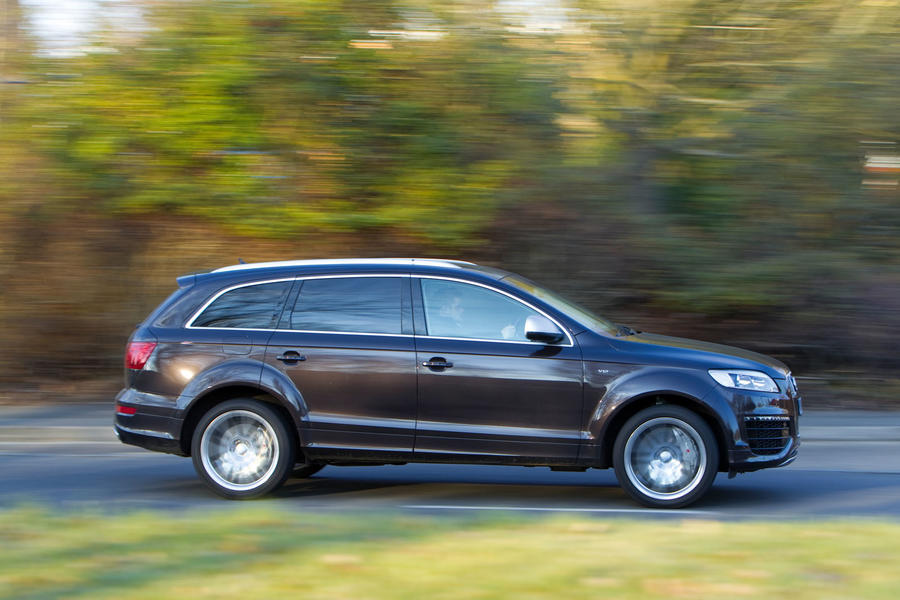 Regarding trims, S line dominates but be warned: its stiffer suspension can be uncomfortable. For larger and smarter alloy wheels, special paint and even more kit, check out the two variations on the S line theme, Style Edition and Sport Edition. S line Plus is an additional permutation.

We can see their appeal but the contrarian in us warms to SE trim, one up from entry-level Standard. Attractions include its more supple standard suspension, sensible level of equipment and absence of body addenda. A clean one-owner 2011-reg 3.0 TDI 240 SE with 60,000 miles and full Audi service history costs £15,000. It hits the Q spot perfectly.

S Line Sport Edition: Costing £3000 more than S line Plus, this trim adds even smarter 21in alloy wheels and a sporty bodykit to an existing spec that includes leather trim, privacy glass and xenon headlights. 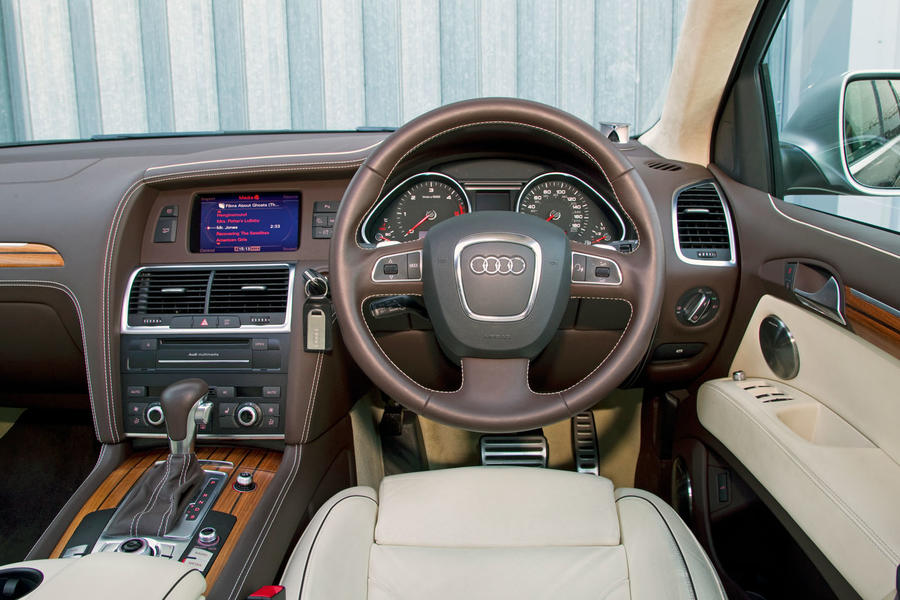 Engine Feel for misfiring and poor running, often traced to emissions sensor problems. Another cause, at least on the 3.0 TDI engine, is failure of the electrically powered flaps in the inlet manifold and/or problems in the throttle body (this last fault can cause the vehicle to lurch when being driven). Staying with the 3.0 TDI engine, start it from cold and listen for the timing chains rattling as the tensioners begin to relax. If the engine is hot, the seller may be trying to hide the problem. Check for excessive turbo lag (driving a variety of Q7s will help set a benchmark). On a high-mileage car, white or blue exhaust smoke may be caused by failing piezo fuel injectors. It's an expensive fix – around £2000. If stuck in slow-moving traffic check the engine does not overheat.

Transmission Make sure kickdown works (it requires a hefty shove) and that changes are smooth.

Suspension The air suspension system suffers a number of issues so be sure the vehicle sits properly, that it can scroll through its range of height settings and that sport and comfort modes are clearly different from each other.

Steering Be sure the steering changes weight from parking to cruising speeds.

Tyres Make sure there's plenty of rubber remaining because they don't last long.

Body Check the underside and body sides for off-road and parking damage, and roof drains for blockages. The exhaust is quite exposed so check this, too, for damage.

Electrics Cars fitted with towbars have been known to experience electrical issues.

Interior Make sure the air conditioning system works faultlessly. Be sure all features work as they should including connectivity systems, which can be troublesome.

Large though it is, the Q7’s maximum braked towing limit is 3200kg compared with 3500kg (the maximum legal limit) for the Land Rover Discovery.

A shortage of head and leg room means that only small children will find the Q7’s third row of seats comfortable. 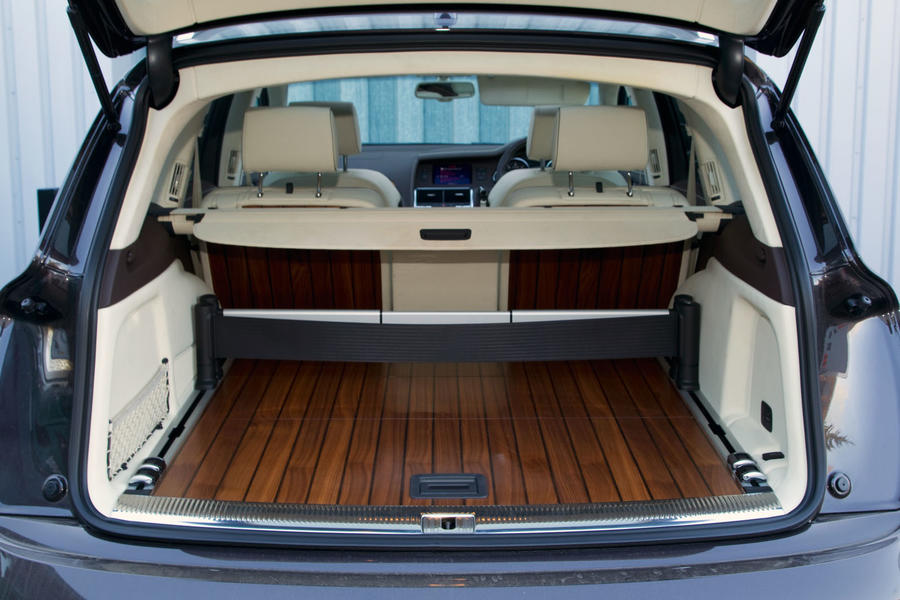 They may be diesels but don’t expect to achieve more than 30mpg in real-world motoring from the 201bhp and 242bhp 3.0-litre TDI engines. The 4.2-litre TDI returns around 25mpg.

The Q7’s underside isn’t well protected so avoid any car that has tackled anything more challenging than a bowling green.

Q7s over three years old qualify for Audi’s fixed-price servicing plans, which claim to offer simpler and more transparent pricing for a range of essential jobs.

I wouldn’t agree that the Audi Q7 isn’t pretty. I think it’s all a matter of taste and sight. It is definitely my first choice in the SUV class.

Come off it, surely no 4L model Q7 can be described as 'nearly new'.  The 4M has been on sale in the UK for four years.