BACK TO ALL NEWS
Currently reading: Used car buying guide - six fast Audis from £5k to £150k
UP NEXT
Nissan will build batteries in UK to sustain Sunderland plant

The new RS3 Sportback, due to be revealed at the Geneva show, follows a well trodden path of past hot Audis. Here are some of our favourites
Share
Open gallery
Close
Share story

From the full on Audi R8 supercar to the cheap and cheerful coupé S2, fast Audi's aren't hard to find on the used car market. Here's our pick of the best for every budget.

‘RS’ badges denote the top of the Audi tree, and the first car to bear the name was the 1994 Audi RS2 Avant.

The RS2 was actually the result of a tie-up between Porsche and Audi, and all the clues are there. It sits on Porsche wheels, has door mirrors from a 911, Porsche motifs on the badges and even an inlet manifold built at Porsche’s factory. In many ways it’s as much a Porsche as an Audi, and in terms of performance it certainly has more in common with a Porsche than an Audi 80.

It was powered by Audi’s five-cylinder turbo engine, but in a heavily revised format. A bigger turbo, better breathing and a host of internal changes meant the engine now produced 311bhp, while a 40mm drop in ride height and the braking set-up from a 911 necessitated that switch to bigger wheels. The results were pretty spectacular, however.

The RS2 had supercar performance, hitting 60mph from rest in 4.8sec and pushing on to more than 160mph.

If you fancy getting your hands on an RS2, you’ll have to hunt around. Just under 3000 cars were manufactured during the two-year life of the model, of which only 180 were right-hand drive and not all of those came to the UK. If you do find one, however, it won’t be cheap, with the best examples commanding something in the region of £15,000.

For You can pretend it’s a Porsche

For folks of a certain age, the ultimate fast Audi is the ur-Quattro. The Quattro was initially conceived as a short-run homologation special to facilitate the model’s participation in the World Rally Championship. The first run of cars came with left-hand drive only, but the right-hand-drive models arrived on UK shores in August 1982.

In the end, nearly 12,000 examples were made during the car’s 11-year production run, but don’t expect to find a bargain. Demand remains high, so expect to start shopping at around £13,000, although in order to get a choice and be looking at the best examples, you’ll want something closer to £20,000 spare.

For You can use it every day

Against Getting more expensive all the time, both to buy and to run

Built to satisfy the homologation requirements to allow it to compete in Group B rallying, the Sport Quattro had 12 and a half inches chopped out of the wheelbase, wider rear wheel arches and power hiked to 306bhp.

To improve weight distribution, the engine was aluminium rather than steel, and Kevlar was employed in the bodyshell. Only around 220 cars were built, and this, along with the fact that they all have a strong motorsport heritage, keeps prices high. Realistically, you need around £150,000 to get taken seriously, but one of the best examples around is currently on the market for £495,000.

Expectations were high for the first production model to wear the ‘S’ badge. The 2.2-litre five-cylinder turbo engine gave the coupé 150mph potential and a sub-6.0sec 0-60mph sprint time, with the quattro four-wheel drive system ensuring that none of the car’s 217bhp struggled to reach the asphalt. The S2 wasn’t thought to be as good to drive as the figures suggested, however, although revised steering, more power and a six-speed gearbox improved things in 1992. 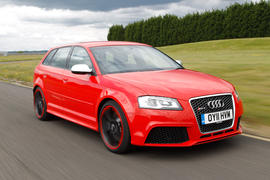 The Audi RS3 Sportback is fast and practical, but a £40k performance car needs to offer more

Prices for an S2 start at around £5000, but the very best examples can nudge five figures.

Against Not the sharpest drive

The Audi R8 offers a very civilised route into supercar motoring, and with the oldest ones on the road today celebrating their seventh birthday, you can now slip into the cabin for small executive car money.

Our preference is for the V8 version of the car, as its handling is a little sweeter than that of the V10, plus it’s barely slower in everyday use. Prices start at around £45,000, although you can sometimes nudge under that, particularly without an automatic gearbox.

For It’s a supercar

Against Prices are still falling

The third generation of the S4 quattro emerged in 2003, but rather than the V6 bi-turbo engine featured in previous-generation S4s, the new model was powered by the 339bhp 4.2-litre V8 engine from the A8. It was also the first of the ‘S’ cars to be offered in three body styles: saloon, Avant estate and, from spring 2004, convertible.

The BMW M3 edged it in pure driving terms, but if you’re after one today, the S4 is a cheaper buy. Shop around and there’s every chance of change from £5000. Insist on a proper service history, though.

Against Cheap to buy, not to run