Japanese manufacturers have wonderful imaginations when it comes to people-carriers.  Here's some tempting private imports on sale in the UK from £1000
Share
Open gallery
Close
Share story

When you need to move lots of people and luggage, sometimes the only option is a large van. Don't despair though, because these Japanese vans are cheap as chips.

The Mitsubishi Delica was built on Shogun running gear and will be great if you need to negotiate tricky terrain with your whole family on board. It seats seven or eight, depending on the model, and can have its seats removed in favour of an inflatable bed. It’s available with a choice of 2.5 and 2.8 diesel engines or a 3.0 V6, with prices from £2000.

It can also lend itself well to a camper conversion. It’s great because of its more compact exterior dimensions, but the high centre of gravity can make cornering at speed a scary prospect.

As with all of the cars here, get online and look for an owners’ club before you buy. This could save you a packet.

The Bongo is a versatile MPV that lends itself well to camper conversions or can be used as an eight-seater, with the seats flattening to form a bed for two people. Prices vary from £1600 to £16k, according to condition and age, and care is needed when buying.

Deals that are too good to be true are just that. Watch out for well-worn cars, engine problems and potentially perilous camper conversions. The 2.0 16v models are great if you don’t want to carry or tow much, but the 2.5 V6 diesel has all the torque you need for hauling. The 2.5 V6 petrol is expensive to run and maintain, and avoid LPG conversions.

Without a diesel version, a heavy MPV is always going to be expensive to run. However, this is Japan’s best-selling MPV for a reason. It is exceptionally reliable and there are many examples available, with either a 2.4 engine or a 3.0 V6. With prices spanning £6500 to £22,500, there’s likely to be one for you.

There are no major problems to report but, as always, look for evidence of neglect and keep a close eye out for dodgy campervan conversions.

The Alphard is also available with a hybrid drivetrain. This is worth considering to keep running costs down, especially if you’re planning mostly urban use.

The Elgrand definitely is grand for its spec list. With many parts shared with UK cars, plus Nissan reliability, the Elgrand should be easy to maintain. Check the four-wheel drive system for leaks, listen for clicking driveshafts, take a test drive and ask for a warranty. Choose from 2.5 and 3.5 V6 diesels or a 3.2 V6 petrol and two or four-wheel drive.

Depending on the model you choose, the Stepwagon seats seven or eight, and the interior is adjustable to suit your needs. The Honda offers 2.0 and 2.4-litre engines, and you can choose between two and four-wheel drive. 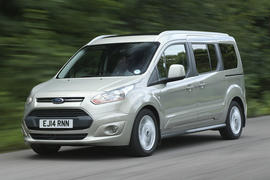 The Grand Tourneo has conventional doors at the front, sliding doors to the rear and a roof-mounted tailgate

Van-style space above a Focus chassis: is this the best of both worlds?

They’re cheaper than the others in this segment (from £1000) and seem to offer less in terms of available kit, but retro-fit installations are available. A Stepwagon should be relatively easy to maintain, being related to the CR-V.

The Mitsubishi Delica pictured and referred to in the text is not one of the earlier ones based on Pajero running gear as the previous two generations were. The first examples of this, the Delica D5 did appear in 2007 and they are still in production, based on the front wheel drive/four wheel drive Mitsubishi/Daimler Chrysler GS global platform used by the Galant and US Avenger and Mitsubishi Evos. I've just been and checked and under the bonnet the engine is installed transversely on ours. Autocar should not be making such obvious and easily checked errors when there is such a thing called the internet-and Wikipedia.
405line 23 December 2015

The misubushi is ok/nice as have been a quite a few of their past cars, the rest are the usual riot of terrible shapes etc.