Ahead of us driving the new Chiron next week, we revisit our first experience in a modern Bugatti, when we drove the EB110 GT on 16 March 1994
Open gallery
Close

Autocar has just driven the new Bugatti Chiron super-hyper-megacar, and it was rather brilliant.

That name alone is so evocative before you even look at its styling or read any of its mind-boggling statistics.

Here’s a little background. Ettore Bugatti, an Italian engineer from a well-to-do family, formed the company in 1909 in Molsheim, Germany. After World War II, the Alsace region was transferred back to France, hence the brand’s distinct identity.

Until the outbreak of World War II, Bugatti produced some of the finest, most beautiful and highly exclusive motor cars around. Bugatti’s series of racing cars were extremely successful in early Grand Prix racing, most notably at the hands of Monegasque driver Louis Chiron, who achieved the most podiums for the marque and won his home race in 1931. 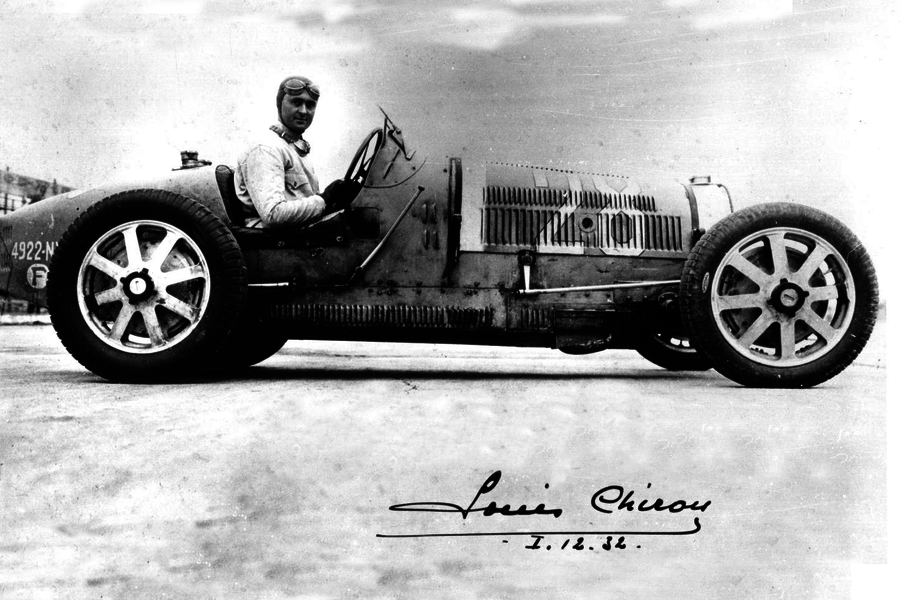 The new car is named after him, as was its predecessor in 2005, named after one of Chiron's contemporaries, Pierre Veyron, who drove a Bugatti to victory at Le Mans in 1939.

Sadly, the war marked the beginning of the end for Bugatti, and after Ettore’s death in 1947, the decline became a terminal one, with the doors shutting for good in 1952.

But the history books from then until the Volkswagen Group’s acquisition of the rights to the brand name in 1998 are not blank. Far from it.

In 1987, Italian businessman Romano Artioli purchased the Bugatti name, built a factory, and, in 1991, launched the EB110 supercar, a year before the rival Jaguar XJ220.

On 16 March 1994, Autocar subjected the GT to our famous road test. 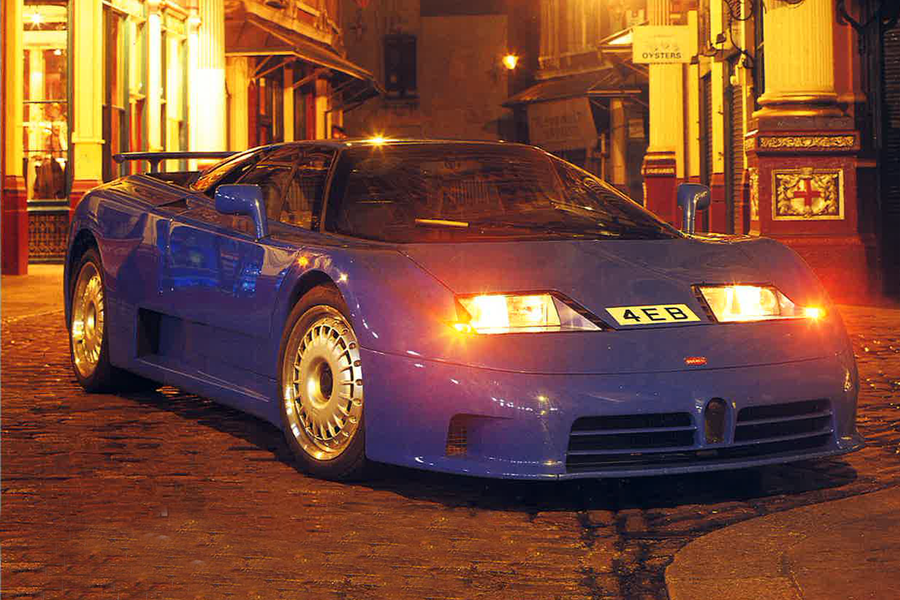 “There was a time when Bugatti’s glorious return to form looked shaky,” we began. “But the fingernail chewing is now over, terminated, and the blue EB110 you see here is the terminator.”

It was powered by a quad-turbo 60-valve petrol 3500cc V12 that could “reach double the legal limit faster than many saloons take to even break it”.

For just £285,500 (around £520,000 today), you could have one (left-hand-drive only), but what was it, we wondered? “The world’s most usable super supercar with unprecedented engineering integrity behind it or just another relic from a bygone age whose speed, price and significance went out with the yuppie in the 1980s?”

Thankfully, the 212mph, four-wheel-drive beauty was the former. In our opinion, “made more sense” than the larger XJ220, being “sensationally dynamic, but useable every day”. 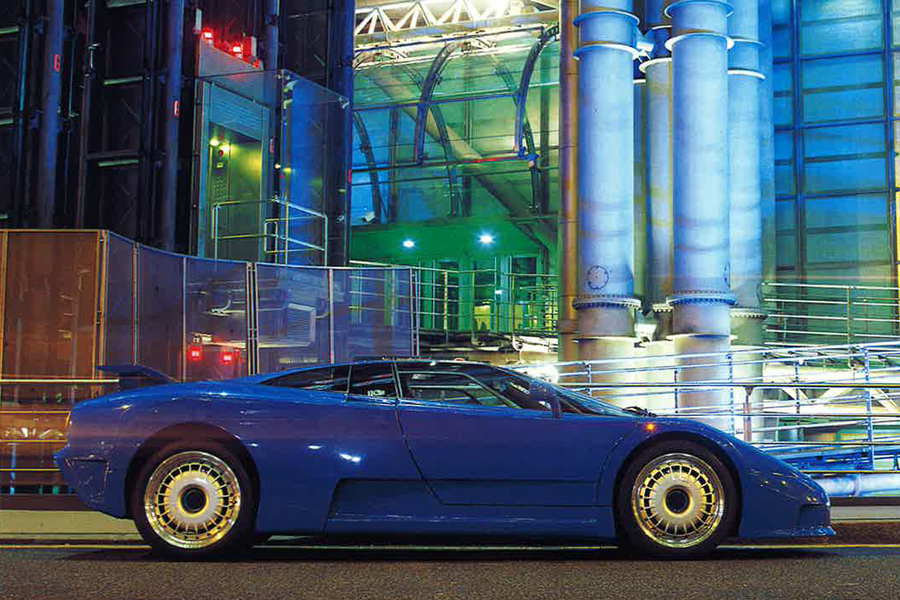 The EB110 had 553bhp@8000rpm and 451lb ft@3750rpm being channelled through a six-speed manual gearbox and delivered to all four wheels, but it wasn’t light. In fact, it was heavier than any other contemporary supercar, bar the “portly” Lamborghini Diablo VT.

“To use regular performance parameters when attempting to relay the nature and size of the capabilities of a car like the Bugatti is a somewhat pointless exercise,” we said, “because even by the time 60mph flashes by in 4.5sec, the car hasn’t really got into its stride. Nor has it genuinely relaxed by the time 100mph registers 5.1sec later. If you must boast of one figure, make it the 30-70mph time of 3.3sec.

“Think of the fastest car you’ve ever sat in and remember the time when you accelerated hard to get past a couple of slow-moving caravans; however fast that felt, double it and you’ll get some idea. Alternatively, jump off the top of an office block and watch how fast the ground approaches – it’s probably a similar sensation. “Only the Jaguar, in our experience, is faster overall.”

It wasn’t just the engine's speed that impressed, but it’s extraordinary flexibility at low revs which we found to be “almost surreal” – “floor it below 1000rpm in sixth and tit would merely gather steam gradually with no hit of the filling-loosening vibrations that dominate the XJ220’s cabin below 2500rpm, making the Bugatti a much friendlier, easier town companion”. 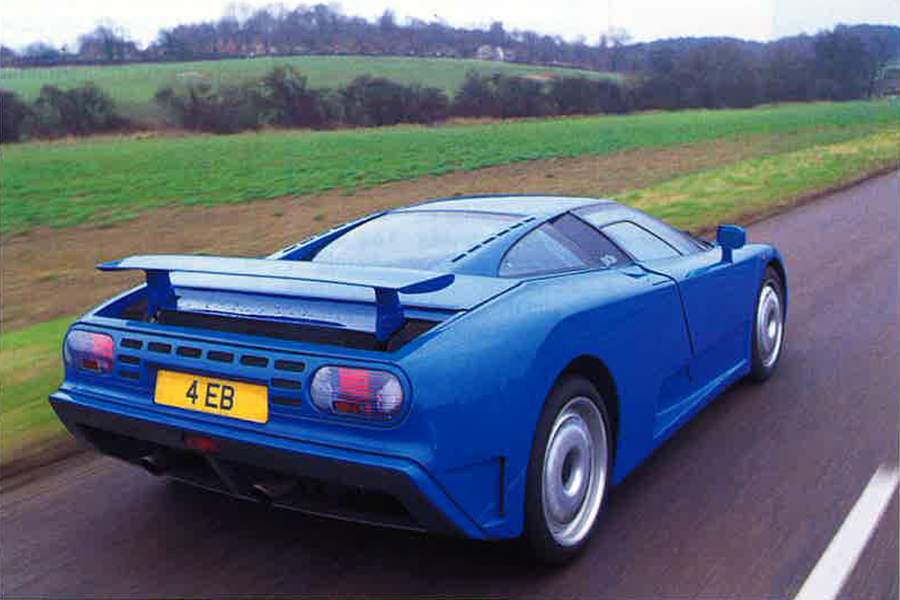 All accompanied by a “proper supercar deep guttural rumble that builds, along with the multifarious whooshes and whistles from the four turbos and their respective wastegates, to an intoxicating, if not quite Ferrari 512 TR-rivalling scream as the 8500rpm cut-out looms.”

The transmission was nothing to fear, either, with “a driveline as tight as a drum and a shift, though meaty, that is cleaner and quicker than you could ever wish. Even the clutch isn’t viciously heavy”.

We would have liked to try and match Bugatti’s 212.5mph claimed top speed, but we couldn’t – the two-mile bowl at our Millbrook testing ground simply couldn't accommodate these levels of speed.

So, there’s the crazy side, but what about the whole ‘everyday’ business?

The EB110 actually achieved “incredible” fuel economy of around 20mpg which was “5-10mpg more frugal than any other supercar”, and “one of the few with a genuine 500-mile-plus range”.

Of handling, we said: “If Bugatti wanted to ensure that its near-racer could be entrusted to your average multi-millionaire, then the EB110’s four-wheel drive chassis is peerless. No question.

“Within minutes you’ll have the confidence to start nibbling at the limit, such is the lack of intimidation." In fact, we thought the EB110 required the same level of skill and driver commitment to punt quickly as a Nissan 300ZX.

“The weighting of the controls – specifically the steering – and the relatively shrunken proportions are such that they allow you to thread the EB110 confidently along roads that would be virtual no-go zones to XJ220s, Diablos and 512 TRs.” 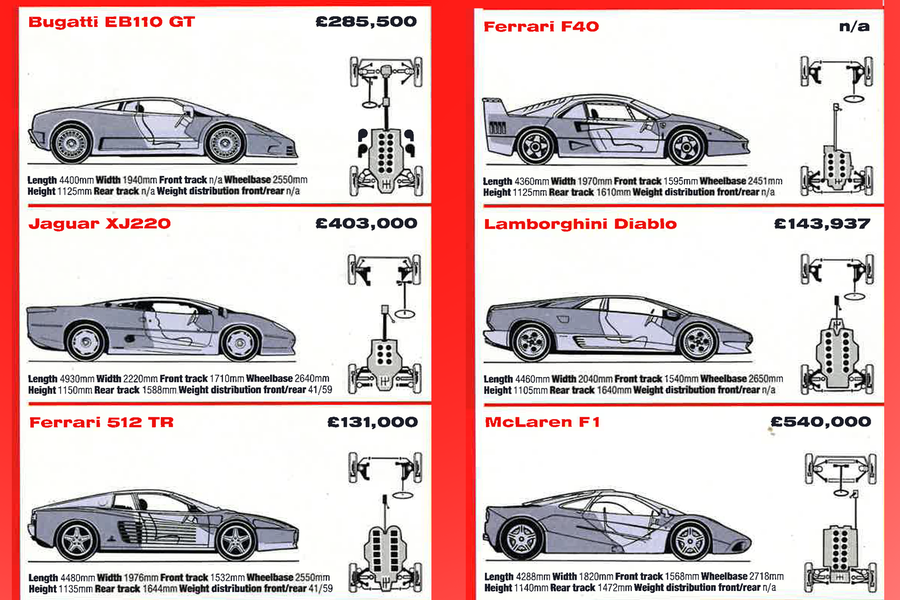 But that’s not to say it was missing something, even though it didn't have “the bottomless grip and composure of the XJ220 through long, fast bends,” or its “eloquently communicative steering”, but it wasn’t far behind, and what it did possess was agility. That’s not to mention excellently well-sorted suspension and body control to such a degree that “you end up wondering whether there is any corner of earth that the Bugatti can’t negotiate at 80mph”. Stopping wasn’t an issue, thanks to “unbeatable” race-spec 332mm brakes.

On top of that, it was the best-riding supercar we’d yet driven, “effortlessly” sponging up ruts around town, and “miraculous” absence of body roll.

There was “one significant flaw,” however: accommodation. 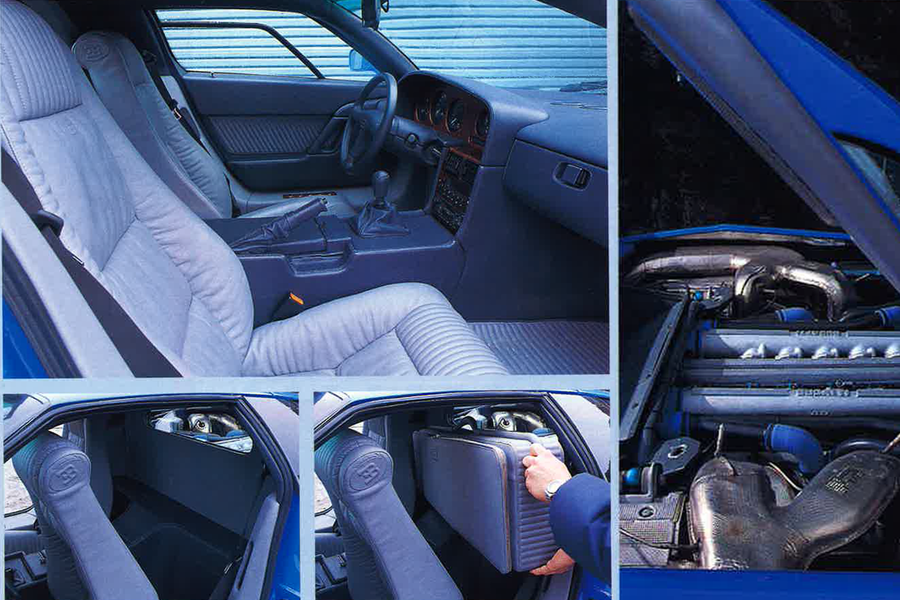 “Basically, if you are taller than 6ft, finding a comfortable driving position is almost impossible with the boot (actually a “beautifully trimmed” 77-litre suitcase that fitted behind the seats) installed, owing to the lack of space.

However, for shorter people, it was like “a favourite glove”, with adjustable bucket seats that were supportive enough for touring journeys, pedals and a gearlever that couldn’t be better located, and a functional dashboard layout. The XJ220 had an actual boot and a much bigger interior.

So, did we think this car lived up to its gilded history? “To assess coldly a car like this would be to assess inappropriately,” we said, “which is why it’s impossible to answer whether it’s a better bet overall than the XJ220”. 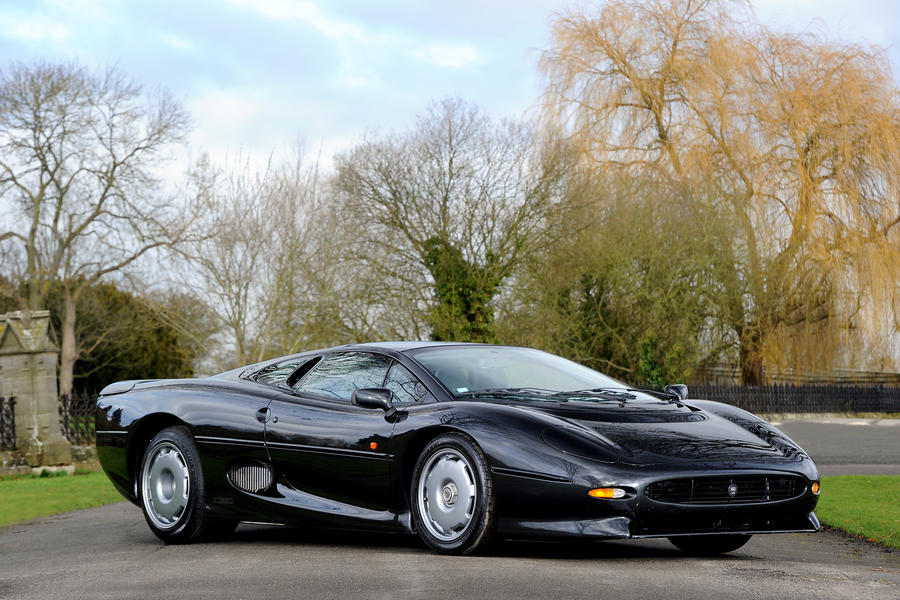 Yet, “replying inappropriately,” we would have said yes, it is, being cheaper and being 90% of the way there dynamically, “setting spanking new standards for ride and agility among supercars and offering similarly delicious rewards for the ultimate enthusiast”. And it matched its promised usability, too, being the most “friendly and easy” thing this side of the Honda NSX.

Thus, we ended with this gauntlet: “It’s a pity, because this could so easily have been the first proper touring supercar, as well as the best. Over to you, McLaren.”

i was a small boy when these cars were about. We didn’t care about golf clubs or if they could be parked in a Waitrose parking space.

but what I do remember was no one rated the Bugatti, the Lamborghini was epic and the jaguar was second. If someone had the die cast model of the Bugatti they may as well have got a cavalier or Granada.

Is the XJ220 the poorest package car of all time?

Is the XJ220 the poorest package car of all time? Compare the stats on that chart with the F1. Jaguar had a bigger team to design and build, a bigger budget, a much smaller engine with half the cylinders and yet produced a car that's SO much bigger in every possible way.
And the F1 had 3 seats and more luggage space despite being comfortably the smallest car on the chart!
And it's not that Jaguar were hopeless, they were winning Le Mans regularly at the time. Very strange indeed.
johnfaganwilliams 3 April 2017

this was a TWR project. The original idea was to fit a V12 but Walkinshaw decided that a Metro Rally car engine with 4 cylinders would be a better bet. Punters obviously didn't agree. Never drove one on the road but I raced an ex TWR example with Wynn Percy at Brands Hatch. Possibly the worst car I ever drove. Fortunately it broke down half way around my first lap in the race so I parked it and walked away. It felt like a tub of lard at Brands - God knows what it was like going to the golf club - oh, no, there was nowhere for the clubs was there?
Leslie Brook 20 April 2017

this was a TWR project. The original idea was to fit a V12 but Walkinshaw decided that a Metro Rally car engine with 4 cylinders would be a better bet.

I'm pretty sure the Jaguar was a V6

Is the XJ220 the poorest package car of all time? Compare the stats on that chart with the F1. Jaguar had a bigger team to design and build, a bigger budget, a much smaller engine with half the cylinders and yet produced a car that's SO much bigger in every possible way.
And the F1 had 3 seats and more luggage space despite being comfortably the smallest car on the chart!
And it's not that Jaguar were hopeless, they were winning Le Mans regularly at the time. Very strange indeed.

Wasn't the Jaguar conceived as a competition car not a road car, its large planform being conducive to good aerodynamics when racing at Le Mans and not really designed with parking at the supermarket in mind.

Agree with saucerer. There is

Agree with saucerer. There is really very little magic to any car launch these days. Does anyone really care about the launch of the Chiron? We sort of know it already, and the successor to it. Each time just a bit more of the fast and big bits, a bit less of the lovely bits.
View all comments (4)