BACK TO ALL NEWS
Currently reading: We build a lithium-ion car battery
UP NEXT
Test drives remain as critical as ever for car buyers and sellers

We build a lithium-ion car battery

EV battery production is the new frontier of the automotive industry, but how are they made? We open our chemistry set to find out
Open gallery
Close

Opportunities like this one don’t come around very often. Here, Autocar has the chance to build its own lithium ion electric car battery cell from scratch, to see the inner workings of a device that usually stays closed because its contents are flammable and to hear an expert ‘how it works’ explanation from the UK’s foremost professor of EV batteries.

There are only a couple of places in the UK where batteries are built from raw materials and one of them is the prototype manufacturing plant at Warwick Manufacturing Group (WMG), a department of the illustrious University of Warwick. Our mentor for the day is Professor David Greenwood, a brilliant communicator of the intricate flows of electrons and lithium ions inside these anonymous-looking grey packages. So free your mind of the notion of crankshafts, valves and bearings and introduce to it instead the anodes, cathodes, separators and LiPF6 electrolytes of our electrically driven future.

Our task is to make a small 3.5V A7-sized pouch cell – about the size of a credit card at 50mm by 70mm – using machinery on WMG’s prototype production line. In a production car, like the Nissan Leaf or Jaguar I-Pace, dozens of these pouches are built up into modules before the modules are wired together to make the battery.

The internal parts and the principles of design and build are the same as for bigger pouch cells, like those fitted to the Leaf, but also the prismatic designs and cylinders used by Tesla. Tesla’s 18650 cells may be a very different shape but they contain the same basic componentry, just rolled up inside a tube.

There are four main processes – make the anode, make the cathode, pack them into a pouch and fill with the liquid electrolyte that contains the vital lithium – but in total there are 11 manufacturing steps. Our session will take a couple of hours, but in a volume production plant, like Tesla’s Gigafactory, 20 cells a second roll off the production lines. Time to don the protective green rubber gloves, white lab coat and go mix chemicals. 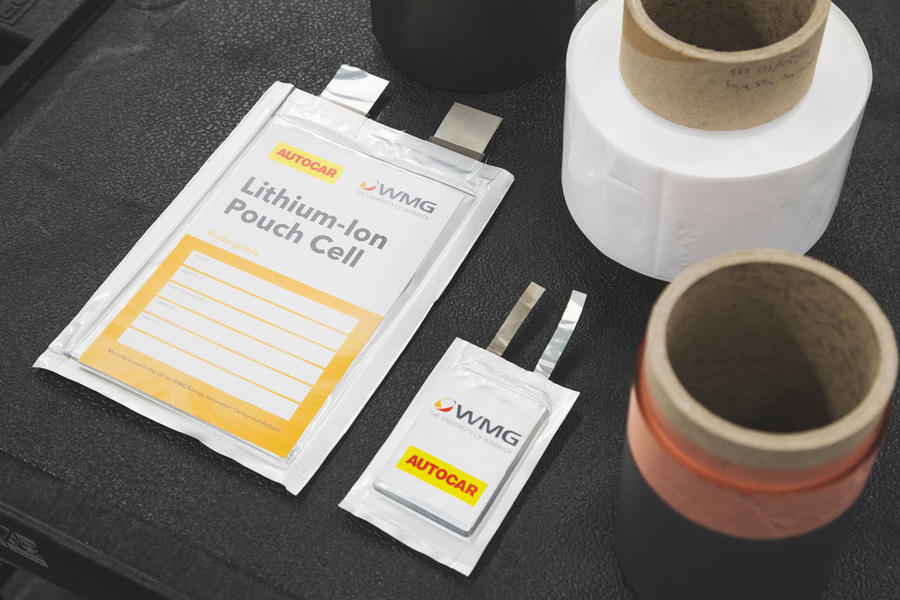 The electrochemically active ingredient in the anode is graphite – it’s the component that actually stores lithium ions. It comes as a fine powder, each particle of which is just 10 microns across – one fifth of a human hair. Here, the graphite is mixed in a water-based solvent with carbon black and a latex-based binder to make a slurry.

The carbon makes the graphite electrically conductive and the binder is an adhesive so it will stick to a copper backing plate in the next stage. A very similar process is used to make the cathode, but the very fine nickel particles can only be handled while wearing pressurised breathing masks, so aren’t appropriate for our visit.

This key step is carried out with equipment designed for the food industry to mix bread and chocolate. Production-quality anode material is mixed in volumes of hundreds of litres. It needs hours of mixing to ensure the powders, solvent and binder are uniformly distributed in the slurry. 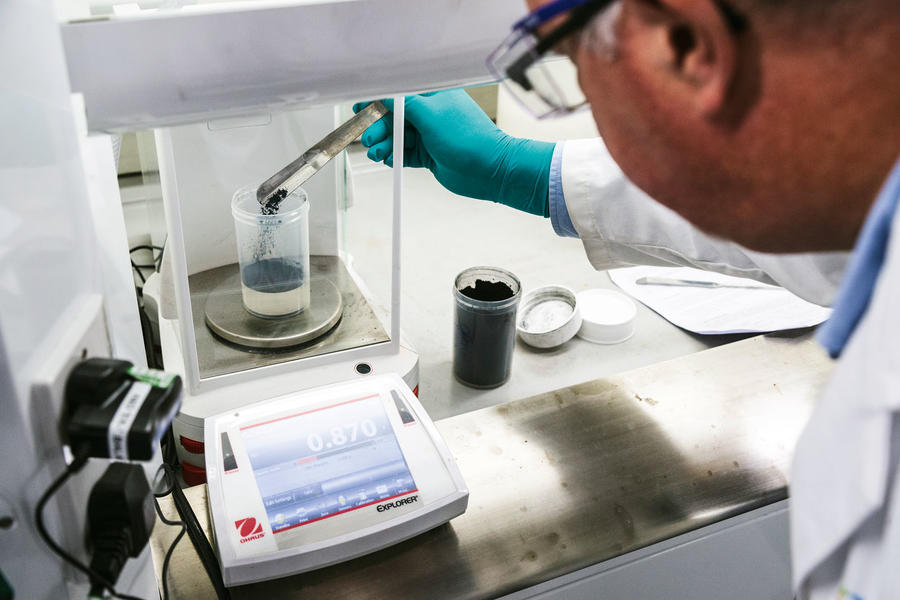 The slurry is attached to an electrical conductor to allow the lithium ions to flow in/out of the graphite, so it is spread thinly over a copper sheet, about half the thickness of a sheet of paper. Copper is used for the anode and aluminium for the cathode because the conditions in the cell would otherwise mean the cathode dissolving and the cell being destroyed.

In a production factory, the coating and drying machine that makes the anode can be up to 90 metres long. The material passes through it in just a minute to optimise the drying process that is critical to how efficiently the anode stores charge.

This maximises the charge storage capacity of the graphite in the anode by gently crushing the coating to increase its density. The process originated as a finishing technique for textiles.

Lithium will react if exposed to moisture in the air and degrade the performance of the cell, so the final production processes are carried out in a dry room where relative humidity is just 0.5% – one tenth of the Atacama desert. Workers in here have to take frequent rehydration breaks.

The ribbon of copper and its graphite coating are cut to the A7 shape to make individual layers. To achieve performance of 3.5V and 6Ah, our cell needs 15 layers – seven anodes and eight cathodes. Each cut is made by a precise die-cutter to ensure each sheet locates precisely between the separator/ insulator and has no rough edges – otherwise the cell could short-circuit and possibly catch fire. 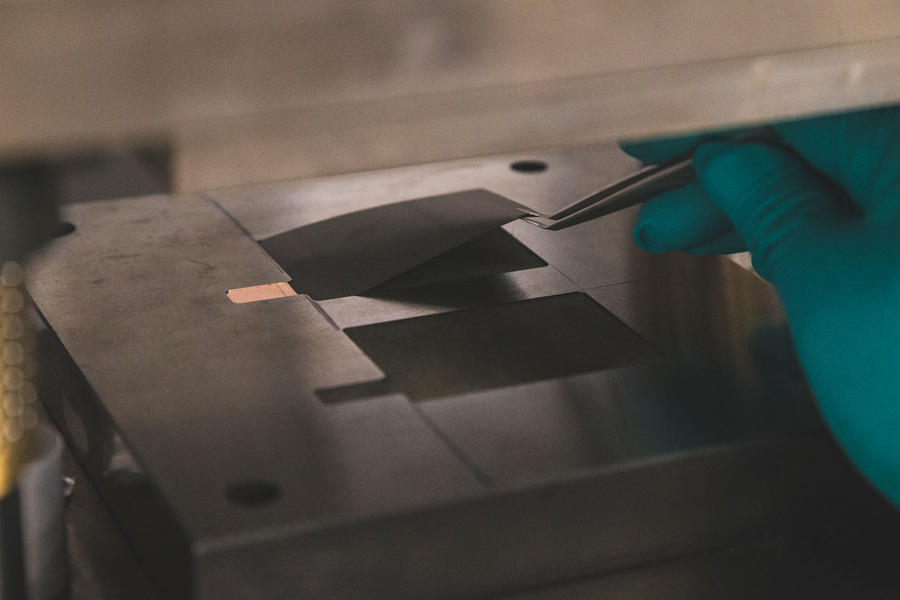 Each of the anode layers has to be interleaved with a separator and the cathode sheets. It’s a fiddly process that’s handled automatically by a Z-fold stacking machine. Our cell will end up with about one metre of separator between the 15 layers.

Ultrasonic welding joins the layers of the anode together into a robust tab – the connection point through which electricity flows in/out of the cell.

The anode layers are housed inside an air-tight pouch made from aluminised polymer – a more robust version of the material used to package food such as coffee beans. In the cell, it has to remain air tight for 15 years; for coffee, it’s just six months. The edges of the pouch are heat sealed but left oversized to allow room for a later process. 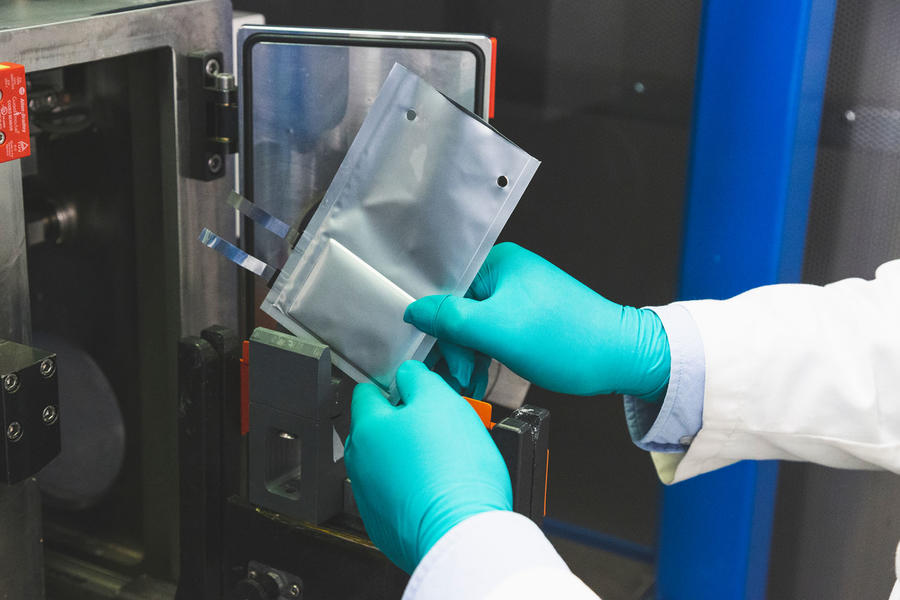 Just 2ml of liquid electrolyte containing lithium hexafluorophosphate (LiPF6) is pumped into the cell and the pouch sealed in an ultra-dry vacuum to keep moisture away from the reactive and flammable lithium. With all the other parts needed to make the cell function, only 4% of our A7 cell’s approximate 200g weight is actually lithium.

This is the Frankenstein moment, when the pouch becomes a functioning cell. A special rig repeatedly charges and discharges the cell while its behaviour is monitored for quality control.

Initial reactions between the electrolyte and the anode create the solid electrolyte interface (SEI) – a protective layer – and in the process give off gas, which is why the pouch was left oversized earlier on. It will be purged and trimmed later. Amazingly, the cell takes days to form: typically the small cell in a Tesla might take three to four days, but some larger pouch cells can take an astonishing 28 days. Our smaller A7 cell will probably be one to two days in the making. 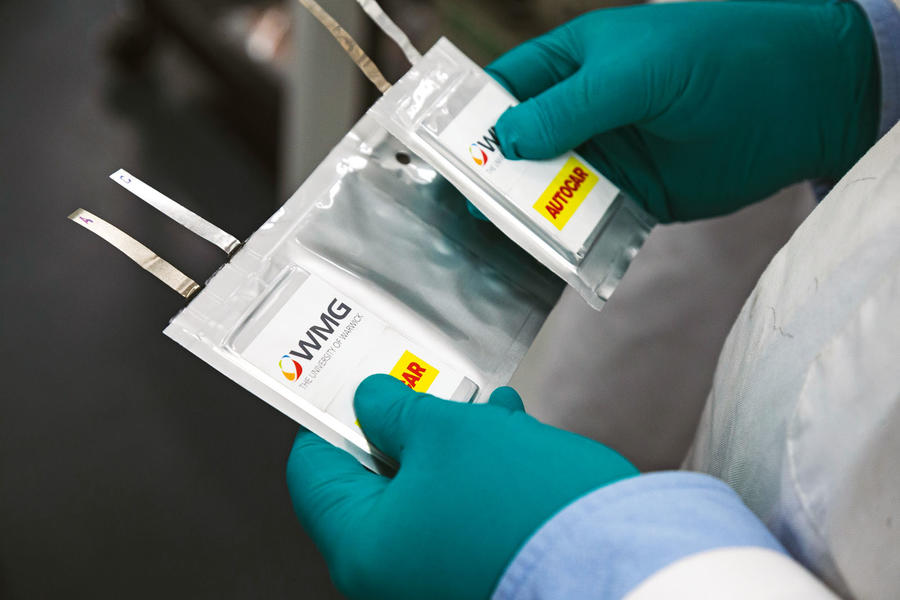 How does a lithium Ion cell work?

Inside the cell are four main components – anode, cathode, separator and the lithium electrolyte – and each one has a specific job to do. In its normal, uncharged state, the lithium atoms (supplied by the liquid electrolyte) are stored on the cathode. During charging, the voltage applied to the cell pushes the lithium atoms off the cathode for collection at the anode, at which point the atoms split up by losing an electron and the atom temporarily becomes a lithium ion.

The cunning bit is the separator. This porous polymer membrane between the anode and cathode only allows lithium ions to flow to the anode. As a result, electrons have to flow in the opposite direction, out of the cell and through the charger, ending up at the anode where they reform with the ions to recreate lithium atoms. When all the lithium atoms have collected on the anode, the cell is fully charged. The separator then prevents a backflow of the lithium atoms.

Under the skin: Why solid-state batteries are a big positive

Not built from scratch

Would have been more interesting if you'd gone and mined the lithium and cobalt alongside the seven year old kids who have to do it every day.

You have no idea where the lithium came from or who mined it in this experiment!

Artisanal mining makes up only a small fragment of the Cobalt market in the DRC, and has nothing to do with Lithium. There is more of this kind of Cobalt in phones and laptops produced for decades than car because of the clear CSR issues.. please educate yourself.

As for effect on kids, I would say the effect on kids on the Niger Delta in Nigeria due to oil spills and contamination of marine life is much more of an issue, but no one talks about this due they because oil is good and batteries are bad for the planet.

The article was really interesting to read. I'd love to hear more about other technical details, for both electric and internal combustion cars.

Please do more of these type of articles.