BACK TO ALL NEWS
Currently reading: Under the skin: The world's most power-dense EV motor
UP NEXT
New Ferrari Purosangue SUV makes first outing in production form

Under the skin: The world's most power-dense EV motor

It's no secret that less is more when it comes to engineering cars, especially where weight is concerned. But this concept also plays an important part in getting rid of lingering unwanted heat in powerplants.

The new Ampere motor-generator from British firm Equipmake is a small and light package that makes very high power. Its low weight, low-inertia components, less mass in which unwanted heat can be stored and superior liquid cooling all contribute to a power-to-weight ratio more than four times greater than that of existing EV motor tech.

The Ampere is made using additive manufacturing, which is the industrial term for 3D-printing using metal powder rather than, say, a plastic you might use in a home 3D-printer. Making parts by adding only the material needed rather than starting with a casting or chunk of metal and then machining bits off it has unique advantages.

Typical EV motors are classified as low-speed and deliver high torque from standstill. Small high-speed motors rely on their high revs to deliver their power, but getting the heat out of small, powerful packages quickly enough can be a problem.

The use of additive manufacturing techniques developed by specialist Hieta made it possible to design smaller, thin-walled heat exchangers for use inside the Ampere with a greater surface area through which to conduct heat to the liquid coolant. Elements of the motor usually made from multiple parts conjoined are formed in one far lighter piece, and these weight savings reduce inertia and allow much higher revs.

The Ampere is an internal permanent magnet spoke motor, which means that its magnets are embedded into the rotor like the spokes of a wheel. The usual approach is to laminate magnets to the rotor and use a retaining sleeve to stop them flying off, but all of that adds weight.

Spoke design maximises the effect of the magnetic flux and enables the coolant to get closer to the magnets than is possible in conventional motors. Cooler magnets are more powerful than hot magnets, so less of the expensive magnetic material is needed and effi ciency is increased.

The new additive manufacturing techniques have raised Equipmake’s spoke motor design to the next level, hence the impressive power-to-weight ratio of 295bhp at 30,000rpm from just 10kg. Equipmake claims this makes it the most power-dense motor in the world.

The power of motors is usually quoted in two ways. Continuous is what it can produce all day without overheating, while peak is the most that it can manage for short bursts. Because its internal cooling is so effective, the Ampere can run closer to its limits for much longer than conventional motors.

Transferring technology from the track to the road is a much-vaunted, if sometimes tenuous, concept used by manufacturers to justify the huge expenditure. Equipmake was the supplier of the high-speed flywheel concept used by Williams in Formula 1, so in this case, the lessons learned from race engineering do actually have a good chance of finding their way into mainstream cars.

Your car may be printed 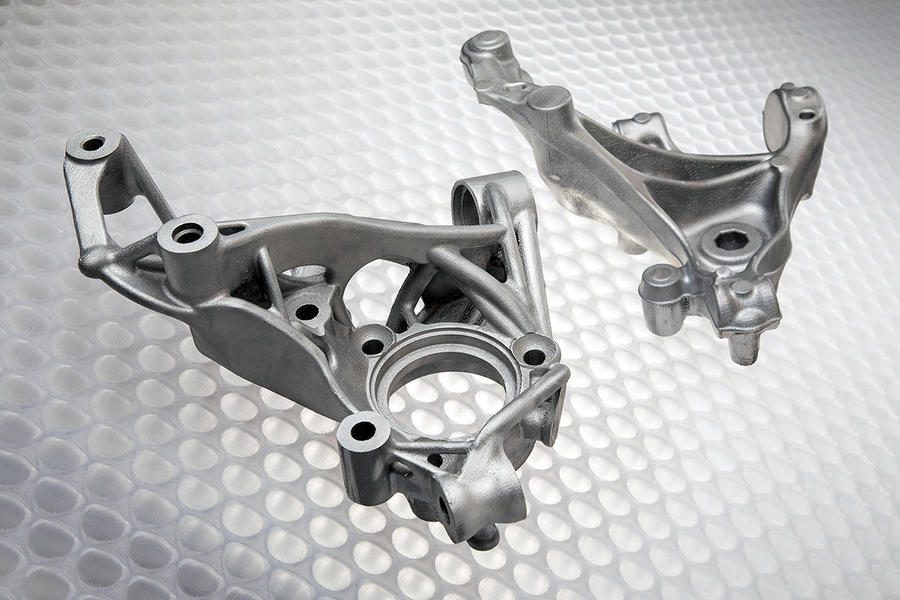 Mainstream car manufacturers are also now using additive manufacturing. Pretty much every metal that can be welded, including tool steel, aluminium and titanium, can be 3D-printed. Below is a conventional Audi engine mount on the left compared with a 3D-printed alternative on the right.

Please note you have got your left and right mixed up with the engine mounts and they are not the same parts but as an example i guess its ok.