BACK TO ALL NEWS
Currently reading: Under the skin: How Ferrari electrified the SF90 Stradale
UP NEXT
Rolls-Royce road trip: remembering the marque's epic seaplane racers

Under the skin: How Ferrari electrified the SF90 Stradale

Ferrari's most powerful road car yet, the SF90 Stradale, may not be its first hybrid, but it’s completely different technically from anything that Maranello has produced before, and it has a different purpose. Its 986bhp drive system is not only brutally powerful but also versatile.

The hybridisation of the V8 powertrain is split between the front and rear axles and produces a combined peak output of 217bhp. Unlike the 599 HY-KERS concept of 2010, it doesn’t have a motor-generator unit (MGU) on the tail of the gearbox. Instead, it has a sliver (really: it’s a mere 72mm thick) of a ‘biscuit tin’ axial flux motor sandwiched neatly between the engine and dry-sump, eight-speed dual-clutch automatic gearbox. So, unlike the HY-KERS system, wherein the electric motor could drive through the seven-speed dual-clutcher on the odd gears, (one, three, five and seven), this one can’t; it drives directly onto the engine’s crankshaft.

Electric-only driving in the SF90 Stradale is taken care of by the water-cooled, radial flux (cylindrical shape) motors of the front-axle RAC-e (which translates from Italian to electronic cornering set-up regulator). This also adds four-wheel drive and, hence the name, torque vectoring for the front wheels.

The front-axle drive is good for 15 miles and provides decent acceleration to 83mph in electric-only mode. Peak power and torque of the two motors, which can reach 25,000rpm, is rated at 133bhp and 63lb ft each, with each motor weighing just 12kg.

The working parts of the three-phase axial flux motors are disc-like, instead of taking a cylindrical format like a conventional radial flux motor. Here, the rotor (which spins) consists of two stainless steel discs sandwiching the stator, which has a plastic structure, is fixed and carries the electromagnetic copper coils. Each rotor is faced with thin, high-performance permanent magnets that interact with the rotating magnetic field of the stator to generate the drive. On its own, the motor-generator can generate a peak of 99bhp and 196lb ft torque.

Each motor drive has its own, individual inverter to control it and convert electrical energy between AC and DC to connect to the battery. The 350V, 8kWh battery is said to be a first in that it consists of a single module (rather than many) containing 84 pouch cells, although the single module is made up of 14 sub-modules housing six cells each.

All of this adds up to a hybrid drive system that’s quite different from that of the 2013 LaFerrari, which had no electric-only capability, being designed with maximum performance in mind. Although tail-mounted, the electric motor of the LaFerrari drove directly to the rear wheels, improving efficiency compared with driving through the gearbox first.

The SF90 Stradale’s hybrid drive system is no bolt-on affair; it follows an efficiency programme that started in 2007 with the lightweight Millechili concept, which aimed to achieve a kerb weight of 1000kg. The addition of hybrid drive came only after Maranello’s engineers were satisfied that they had achieved the most possible with conventional technology, and the SF90 Stradale is the culmination of those efforts. 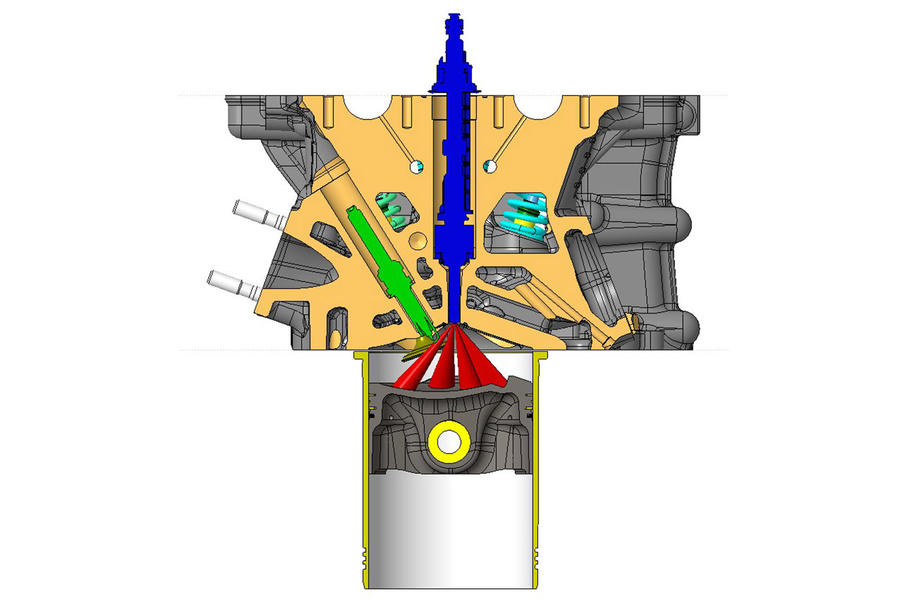 The SF90 Stradale’s V8 engine is an upgraded version of the F154 unit that was introduced in 2013. As well as increasing capacity to 3990cc from 3902cc, Ferrari has reworked the cylinder head with a central (rather than side-mounted) injector, shorter inlet ports redesigned to create more turbulence and 350bar injection.