BACK TO ALL NEWS
Currently reading: Under the skin: The hidden technology of brakes
UP NEXT
GSR2: The new rules making cars safer but more expensive

From parking versions to disc types, brakes are a crucial bit of tech for your car. We survey the different sorts
Open gallery
Close

It's probably an overlooked fact that massive braking performance can be just as exhilarating as huge acceleration, involving steering and a deliciously slick manual gearbox. But it’s an elusive asset. While all brakes work on the same basic principle of converting the kinetic energy in the moving car into heat, the brakes on a performance car and those on a family runaround are like chalk and cheese.

Except for some drum parking brakes and rear brakes on small cars, disc brakes have been the norm for years. The principle remains simple enough: when the brake pedal is pressed, a hydraulic caliper straddling the disc (or rotor) squeezes it under massive pressure between two pads made of friction material backed by a steel plate. The heavier the car and the higher the speed, the greater the amount of energy the brakes need to shed and the higher the temperatures generated.

For road cars, the brake designers have to factor in other things, too, such as the wear rate on brake pad friction material and disc, noise and whether any nasty stuff is being blown into the air as the pads get hot and wear down. Asbestos was once a key component of brake pads; these days, production cars are fitted with non-asbestos organic brake pads (NAO).

The story of stopping involves a vicious circle, though. If a brake gets too hot, it can’t do its job properly – or at all. Brake fluid can boil inside the caliper, generating compressible gas, at which point the brake pedal becomes spongy and sinks to the floor and braking force drops away. As friction surfaces rub together and heat up, the coefficient of friction drops and so does the brake pads’ ability to stop the disc from rotating.

To cool the friction surfaces, conventional discs are made of cast iron, and in between the two braking surfaces there are vanes, curving back from the direction of rotation to draw cool air from the centre to the outside and into the atmosphere. For higher performance, discs are drilled or the surfaces grooved, helping get rid of water on the disc quickly when braking starts and increasing initial bite.

Brakes become more complex the faster a car is. High-performance pad material is formulated to work at high temperatures but doesn’t necessarily work so well when cold. So making a pad work well from cold but which keeps working when getting hammered is a tough call. Calipers get more complicated and expensive, too. The simplest (cheapest) design used for production cars is the floating caliper, a two-part thing with just one piston. Once performance reaches a certain level, though, calipers need opposing pistons. To increase the pad area, calipers may have four or even six pistons (or ‘pots’) and can be made from forged aluminium alloy rather than cast iron, to conduct heat better and reduce weight.

The upgrades escalate through the brake system the higher the performance gets. In more extreme cases, such as racing or track use, then racing brake fluid is needed, with a boiling point in excess of 300deg C. It’s all technology you can’t see, but if it’s right, it’s worth its weight in gold. 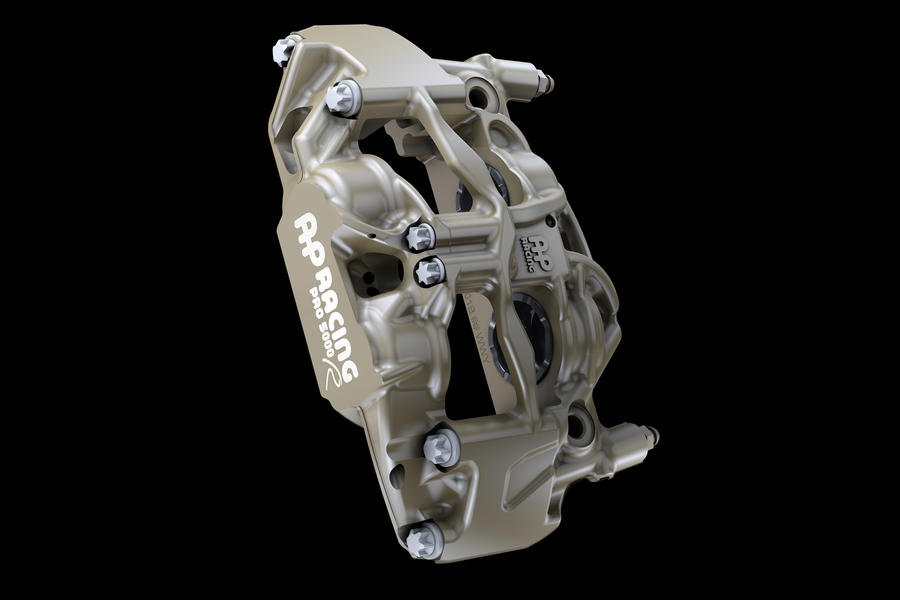