BACK TO ALL NEWS
Currently reading: Under the skin: How curved barriers could clean urban air
UP NEXT
Exclusive: Morgan bosses detail ambitious growth plans

Scientists at Imperial College London have come up with an ingenious, low-cost idea for deflecting exhaust fumes away from pavements and pedestrians.

Dr Tilly Collins realised vortices alongside roadside walls trap pollutants inside them, making air quality worse in those places for pedestrians and anyone in adjacent areas, such as school playgrounds. Installing curved barriers at the roadside reduces the effect of the vortices and deflects fumes away from the pavement back into the road. The Imperial College team is in advanced discussions with Transport for London to select several sites where the barriers could be installed for testing.

Two types of barrier are under consideration: low level and high level. The low-level ones resemble simple Armco barriers, with the concave surface facing the traffic, bolted to the ground along the edges of roadways. The high-level barriers are designed to be mounted on the top of walls, protecting housing and industrial developments, car parks and school playgrounds. The effectiveness of the concept has been demonstrated with the help of pollution dispersal expert Huw Woodward, using computational fluid dynamics.

Although vehicle exhaust pollution will reduce as electrification gathers pace, much of the airborne particulate matter alongside urban roads comes from tyre, road surface and brake wear. The toxic combination of particulates from various sources are all damaging to health, but scientists think it’s the ultra-fine brake-dust particles, which are composed partly of microscopic metal shards, that may pose the greatest danger to health. Ultra-fine particles are less than 2.5 micrometres in size, around 30 times smaller than the thickness of a human hair.

The permanently mounted lower roadside barriers are likely to be made from the same materials as motorway barriers because they need to be safety and crash tested and adhere to the standards that other roadside infrastructure must meet. An unintentional secondary benefit may turn out to be that the barriers provide some protection from vehicles passing close by and potentially make pedestrians feel more secure.

Other considerations include the use of porous barriers to let more light through, reduce the weight of high-level barriers and allow the integration of plants. The low-level barriers would also protect roadside plants from dirt and salt. Plants are thought to have small air quality benefits because particulates stick to the leaves, especially those of drought-tolerant plants, which have been found to retain particulates.

On the flip side, there can sometimes be a disadvantage to some urban plant life, too. Trees that form canopies where there is a large concentration of slow-moving traffic, like the plane trees on London’s Holland Park Avenue, can form ‘urban canyons’ that hinder the dispersal of emissions and keep them at a low level. But the overall benefits to the look and feel of local environments can take precedence and it’s an area where striking the right balance is the key. 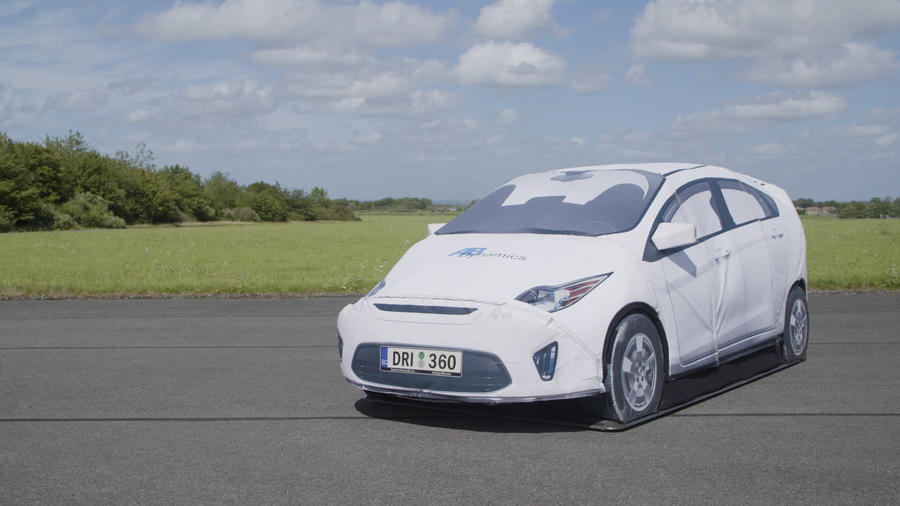 Guided soft target (GST) vehicles, known as soft cars and made from collapsible foam pieces, are used by organisations such as Euro NCAP to test advanced driver assist systems (ADAS) without damaging real cars. AB Dynamics has developed a new high-speed version, the GST120 (for 120kph, or 75mph), to test ADAS and autonomous systems at highway speed. Test vehicles can hit it without being damaged and the foam body can be rebuilt in eight minutes.

Under the skin: Why opposed-piston engines are returning to roads

Under the skin: How tyres can be sustainable

Don't fancy being the cyclist who gets squished between a car and that thin rail of armco...

Surely that just concentrates the pollutants in the roadway and causes more problems for drivers and passengers?