BACK TO ALL NEWS
Currently reading: Under the skin: Does induction beat magnets in motors?
UP NEXT
Porsche linked to F1 entry if e-fuels introduced, says report

Under the skin: Does induction beat magnets in motors?

Due to the sheer numbers of electric vehicles on the way, the finer points of drivetrain efficiency, sustainability and component costs are coming under close scrutiny. EVs aren’t without their downsides: not only lithium ion batteries but also other parts, such as electric drive motors, have environmental shortcomings.

A favourite choice with manufacturers is the permanent-magnet synchronous design. Permanent magnets embedded in the rotor of the motor are attracted to a kind of rotating electromagnetic sleeve created by the stator windings that line the inside of the motor casing. The rotor spins at exactly the same speed as the rotating magnetic sleeve, hence the name synchronous.

This is an efficient, powerful and compact technology, but a significant downside is the use of rare-earth materials to make the permanent magnets. The key rare-earth material used in the magnets is neodymium, which is mined only in a relatively few places throughout the world. Costs have soared, and because of concerns over that and availability, the industry is looking for other technical solutions.

Leamington Spa-based electrified powertrain engineering consultancy Drive System Design (DSD) thinks a better alternative is the induction motor (which is already used by the Tesla Model S). This has no permanent magnets; instead, the rotating field of the stator induces a current in copper conductors embedded in the rotor. Electromagnetic induction is the principle used in a wireless phone charger or an old-style engine ignition coil. If a wire is placed in a magnetic field, the field collapses (if an electromagnet is turned off, for example) and a current is induced in the wire.

In an induction motor, a current is induced in the copper ‘squirrel cage’ that’s embedded in a laminated steel rotor, which in turn creates an electromagnetic field, so the induction process does away with the need for permanent magnets.

For the induction process to work, the rotor must turn slightly slower than the rotating magnetic sleeve of the stator (slip), so the motor is asynchronous and slightly less efficient – or maybe not.

DSD has found that although the peak efficiency of permanent-magnet motors is higher, induction motors maintain higher efficiency through a wider part of the operating range, especially at higher revs. If the driveline is designed so that the motor is allowed to operate in its optimum range for more of the time (using a multi-speed transmission, for example), the induction motor comes into its own.

The bottom line is that despite the permanent-magnet motor’s apparent advantage, it can consume more energy than an induction motor over an entire drive cycle. DSD puts the price of an induction motor of similar performance at about 8-10% cheaper with today’s prices for rare-earth materials, but that could change for the worse in the future.

Now EVs are well past the proof of concept stage and rapidly heading towards a mass market of millions, induction motors could become the favoured powertrain choice.

What's in the duffel bag? 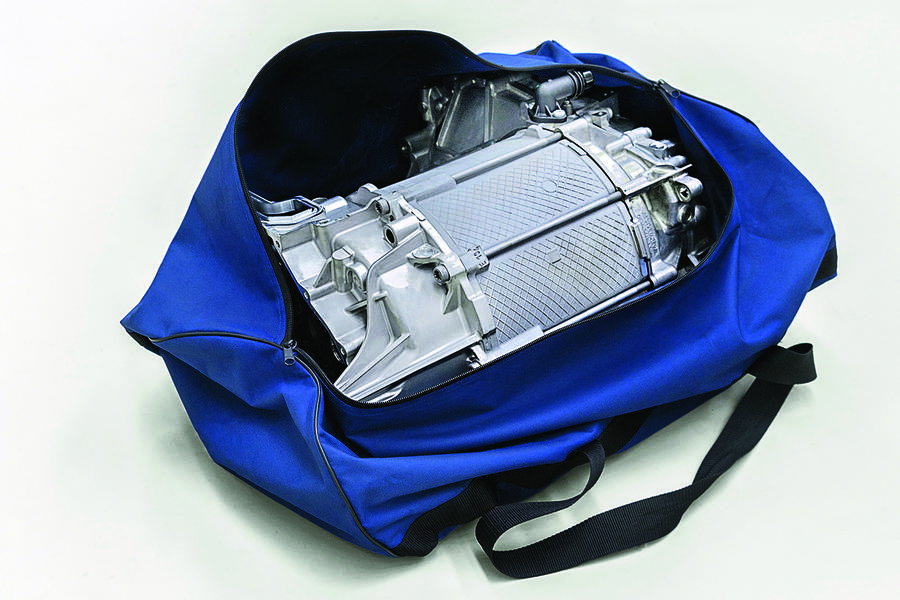 Volkswagen’s APP 310 electric drive unit, which it boasts can fit into a sports bag, has gone into production at its Tianjin components factory. It’s destined for the Chinese-market ID 4 Crozz and ID 4 X SUVs built respectively by joint-venture partners FAW and SAIC. Unlike DSD’s induction motor design, the motors in the APP 310 are permanent-magnet synchronous items. They produce 201bhp and 229lb ft.

Under the skin: how traction control got a grip on the car industry

Under the skin: what exactly is carbonfibre?

There are other issues:  It's not possible to control to zero speed (due to slip) and they are generally bigger & heavier for a given power than PM and they are less efficient (this matters for range).  They are also rotor temperature limited as cooling a squirrel cage is harder than a magnet-based rotor.

There are other motor design options for magnet free or magnet reduced such as SynRel or PMaSynRel topologies, as per Model 3 but they aren't induction based like Model S was.  S has also moved to a combination now of PMaSynRel front and induction rear which is a good compromise.