BACK TO ALL NEWS
Currently reading: New Volkswagen ID 4 teased ahead of launch tomorrow
UP NEXT
Polestar prioritises sporting character for new 3 SUV

The new Volkswagen ID 4 will be unveiled tomorrow (Wednesday 23 September), and the firm has continued its build-up to the reveal by showcasing the new IQ Light technology it will offer.

Volkswagen says the ID 4 has been designed with a "powerful and sporty, but simultaneously also likeable character", which the new lighting plays a major part in. The large LED headlights at the front of the car are intended to give the ID 4 character, while the rear light clusters feature a '3D effect', with the brake lights designed in an X shape. 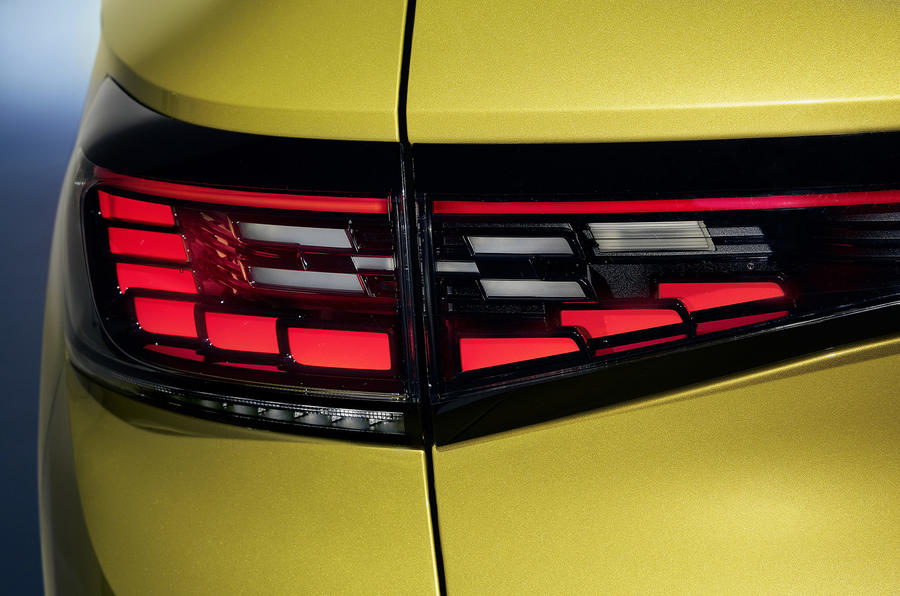 The IQ LED matrix headlight system, which features 11 individual LEDs that can be individually operated to control the direction of the lighting, will be offered as an option on the ID 4.

The headlight images are the latest in a series of ID 4 teasers, following a series of sketches showing the general design of the car.

The design of the ID 4, which was first seen as the ID Crozz concept, is based on the ID 3, with Volkswagen Group design chief Klaus Zyciora describing it as "clean, flowing and powerful". He added that the mix of gentle surfaces with clear edges was intended to make it to look "as if shaped by the wind itself". 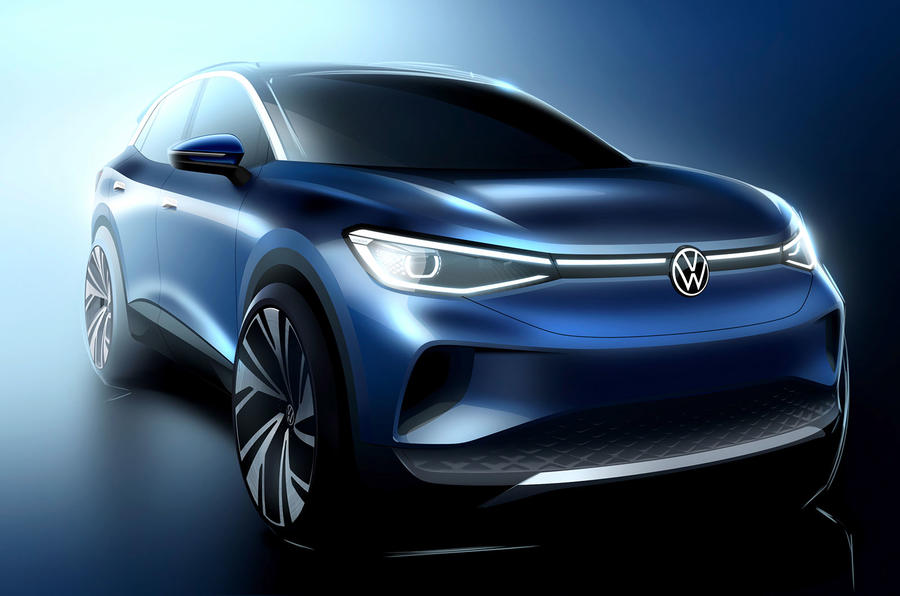 Zyciora said aerodynamic efficiency was a key factory in the ID 4's design, in order to maximise its range. Volkswagen says the machine will have a drag coefficient of 0.28, making it substantially more efficient than most SUVs. “The electric design evolution of the ID 4 also means that we have focused very strongly on the aerodynamics,” said Zyciora.

The emphasis on aerodynamic efficiency resulted in the ID 4's flowing shape, with Volkswagen saying the rear of the car has been "significantly drawn in" to maximise this. There's also a large roof spoiler and the bodies of the rear light clusters have been designed to help ensure that airflow at the rear of the car is cleanly separated.

The ID 4 will be sold globally and produced at factories in Germany, the US and China. Volkswagen brand boss Ralf Brandstätter was present to watch the first series-production ID 4s emerge from the Zwickau line recently. 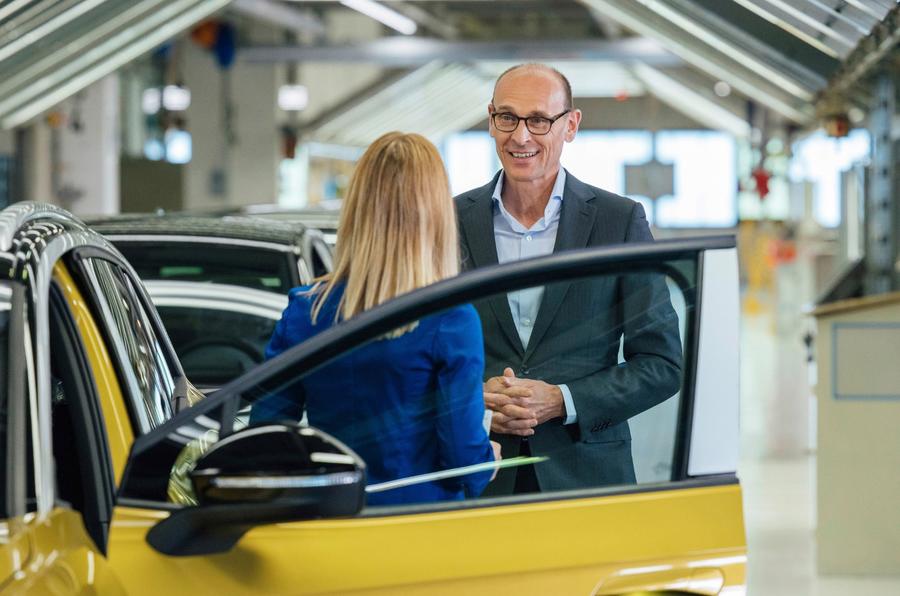 The ID 4 will initially be offered with rear-wheel drive and a range of up to 311 miles. Volkswagen says production of the SUV began on time, despite the disruption caused by the coronavirus.

Thomas Ulbrich, Volkswagen board member for e-mobility, said: “Given the major societal challenges of recent months, the successful start of ID 4 series production is an exceptional achievement.”

Zwickau was previously home to the Passat. Volkswagen has spent €1.2 billion (£1.1bn) converting it to house an MEB-platform production line with an initial capacity of around 300,000 vehicles.

Pre-production of the ID 4 has also begun at Volkswagen's factory in Anting, China, and production is due to begin in Chattanooga, Tennessee, in 2022. 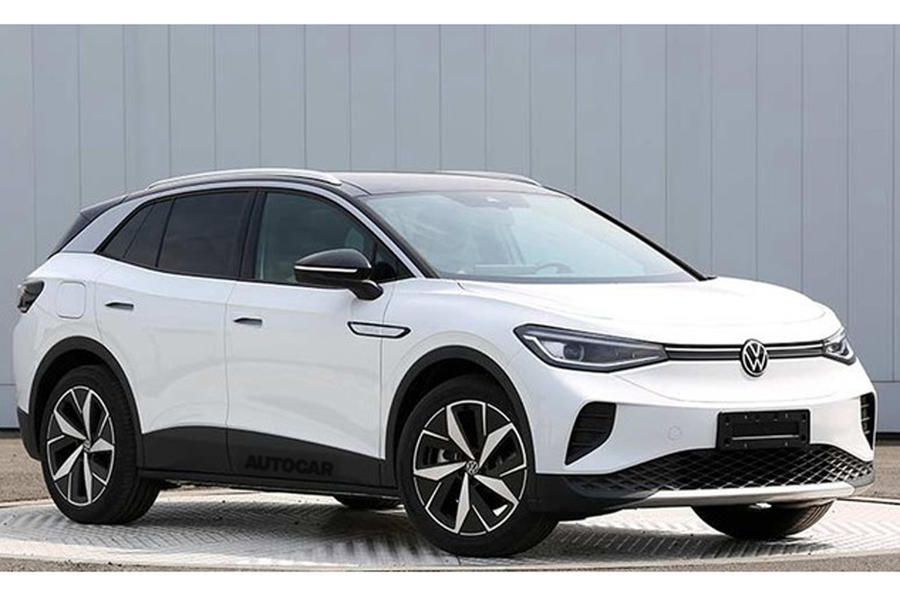 Although Volkswagen has yet to officially reveal the ID 4, it has previously been seen undisguised. The images were contained in filings to China's Ministry of Industry and Information Technology (MIIT) as part of documents that all firms must submit to gain type approval for new models in China.

The images show how the ID 4 will look in its production bodywork and confirm that, as expected, it will share similar design features and traits with the ID 3. The documents also confirm that the SUV will be 4592mm long, 1852mm wide and 1629mm high, with a wheelbase of 2765mm. Initially, the Chinese model will feature the 201bhp powertrain.

The ID 4 was due to be launched at this year's New York motor show, but after that show was postponed due to the pandemic, it's expected to take place in the next few months.

The ID 4 will initially be sold with a single electric motor and rear-wheel drive, with a more powerful twin-motor four-wheel drive layout set to be offered within the first 12 months of sales, according to Brandstätter.

As suggested by the ID Crozz concept, the rear-wheel-drive model is expected to offer up to 201bhp and 229lb ft of torque from its rear-mounted electric motor. The four-wheel-drive model will add a front-mounted motor with an additional 101bhp and 103lb ft, taking its overall output to 302bhp and 332lb ft.

The ID 4 will offered with a range of different battery options, the largest of which, a rumoured 83kWh unit, will offer a range of up to 311 miles on the WLTP test cycle.

It will also offer rapid-charging capability that will allow its battery to be charged to an 80% state of charge within 30min on a 125-150kW system.

There will be two versions of the ID 4: a standard model and a coupé-SUV in the vein of the original concept, expected to be named the ID 5. This will be revealed at a later date.

"As early as 2020, we aim to sell 100,000 all-electric Volkswagens [per year]," said Volkswagen Group chairman Herbert Diess at the Crozz concept's 2017 unveiling. "But this is just the beginning. By 2025, annual sales could increase tenfold to one million vehicles."

The ID 4 and ID 5 aim to combine the dynamic lines of a modern-day sports car with the all-terrain capability of a dedicated off-roader. They're said to offer interior space on a par with the Tiguan Allspace, a long-wheelbase version of Volkswagen's best-selling SUV model.

The ID Crozz concept is 4625mm long, 1891mm wide and 1609mm tall, putting it in between the five-seat Tiguan and seven-seat Tiguan Allspace in terms of dimensions. The wheelbase is 2773mm.

The MEB-based ID Crozz features two electric motors – one mounted within the front axle, and one at the rear - powered by an 83kWh lithium ion battery housed within the floor structure. The front electric motor sends its 101bhp and 103lb ft to the front wheels. The rear unit delivers 201bhp and 228lb ft to the rear wheels, giving the car a combined output of 302bhp and 332lb ft of torque.

This is just under 100bhp more than the powertrain used by the rear-wheel-drive ID hatchback, intended to offset a likely weight increase. The ID 4 is set to have a range of more than 311 miles, with no specific figure yet quoted. No performance figures have been revealed, although Volkswagen says it intends limiting the top speed to 112mph.

With the car's large battery mounted low down within the floor structure and the electric motors also housed within the axle assemblies front and rear, Volkswagen also claims it possesses a front-to-rear weight distribution of 48:52. Volkswagen officials have talked up the dynamic qualities, suggesting the new platform and chassis provide a “large spread between handling and comfort”.

Volkswagen ID 3: vital EV launched with up to 341-mile range

All-electric Volkswagen ID estate on the cars for future launch

Has there been a single week in the past three years (the first comment on those article is from Sept 2017) without a new or reposted story about the VW ID range on Autocar? I really think it's unlikely. Given they are only just (or still not quite?) delivering the very first ID3s, that's a hell of a lot of marketing/advertising, especially as so many 'stories' are as insightful as 'aerodynamics were an important consideration when styling this car'.

I'm excited by the EV revolution, and even by some of these ID concepts, the Buzz looks great, but please stop this Autocar.

“As if shaped by the the Wind”

That line says all that's wrong with design today.

In production form it looks bit SUV-ish which probably is good commerce today. I was wondering how rear-wheel driven car would drive in snow and slippery conditions. However as the bias is just a bit to the rear, the key for traction after all is for the driven wheels to have enough percentage of the weight over them, so it should drive well enough after all in snow -- like the VW Beetle all these years back. Still, in slippery conditions that also means -- rear biased handling, meaining -- over-steer. Guess all the electronics are to take care of the driver in such a case. Still, if steering is accurate enough and direct enough, you should be able to catch the rear end before the car heads into the wilderness -- with rear end taking the lead. The looks of the car to my eyes seem -- contemporary. Which shall be important for sales. So claimed by some bit boring, however this vehicle is clearly intended to carry the major sales for Volkswagen into the future -- you simply don't take risks you don't need to with such a key vehicle. Volkswagen however could afford to do that, with specialized versions created on that same platform. Inevitably WAG style there shall be pletora of different vehicles under the entire line of brands, ample opportunity for style experimentation if Volkswagen sensibly avoids that -- for it's most important variant of that new chassis.