BACK TO ALL NEWS
Currently reading: Under the skin: The Octopus that's helping Bentley's sustainability
UP NEXT
Ford backs call for European ban on new ICE cars from 2035

Electric drive units (EDUs) – integrating motors, electronics and transmissions into a single, compact drivetrain – are for making sure the various elements work together as efficiently as possible.

With the Octopus research study (it stands for optimised components, test and simulation, toolkits for powertrains which integrate ultra high-speed motor solutions), Bentley and its 15 partners expect to develop the most sustainable electric powertrain technology for future Bentley hybrids and pure EVs. One partner, the Advanced Electric Machines Group, is a spin-off from Newcastle University, where electric motor research is a speciality.

One element of many EVs that isn’t sustainable is the use of rare-earth material (usually neodymium) in permanent-magnet motors. When combined with iron and other materials to make an alloy, neodymium magnets are the most powerful permanent magnets available. Used in the rotor of an ‘electric machine’, they make it relatively easy to generate high torque, and motor control is relatively straightforward, too.

Doing away with these rare-earth magnets and generating a magnetic field with coils of wire instead (electromagnets) is an alternative but makes it harder to achieve the best performance and motor control a little more challenging. A further sustainability problem is the traditional use of copper wire for the motor windings. Although pure copper is easily recyclable on its own, it’s difficult to separate from a motor’s steel components at the end of life.

Bentley and its Octopus partners (and they’re not alone in this) are researching the use of aluminium wire, which is both cheaper and lighter than copper. At the end of life, a motor with aluminium windings can be melted down in its entirety in a smelting furnace and the metals separated. Copper wire is a better electrical conductor, though, so making the switch to aluminium is not without its challenges.

Although less ‘torque-dense’, a motor relying only on electromagnetic windings can compensate by running at much higher revs (up to 30,000rpm in this case) – something that’s achievable partly because of its simplicity. The Octopus drive unit consists of two motors mated to an energy-efficient, single-speed transmission, with the control electronics integrated with the motor housings. Having just one gear doesn’t limit top speed, though, thanks to the motors’ high revs.

Future production systems could have either one or two motors, and in a two-motor set-up, one motor could be shut down when less power is needed. When a motor is shut down, electromagnetic fields collapse and it doesn’t create any drag on the drivetrain but spins freely, something that wouldn’t be the case with a permanent-magnet motor.

Bentley plans to have a hybrid version of every model by 2023 and a battery EV by 2026. Although still a concept study, it hopes the project will result in a compact, cost-effective electric drivetrain that combines sustainability, strong performance, low energy consumption and high levels of refinement all in one neat package. 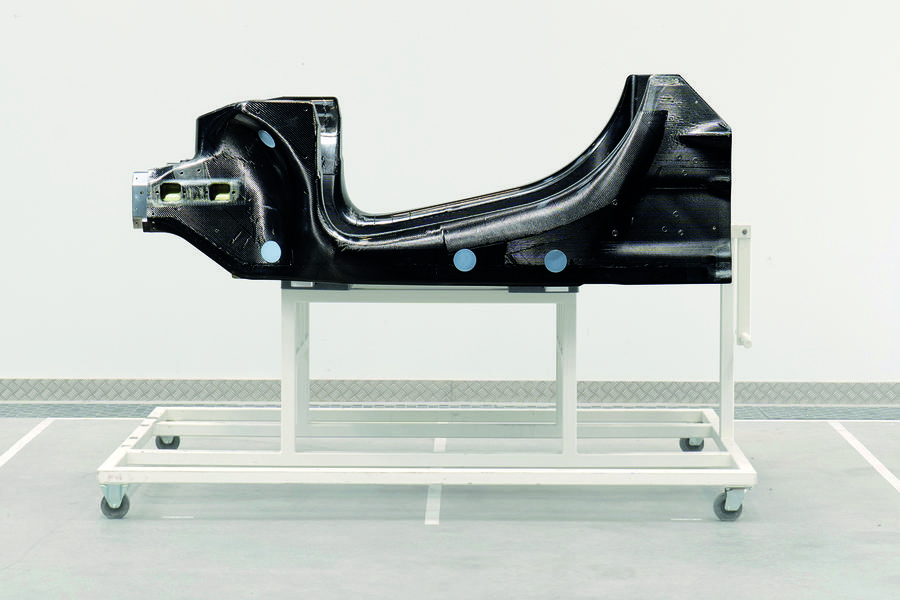 The monocoques of McLaren’s new ‘flexible architecture’ are made using a new resin transfer moulding process designed in-house. The process clamps 20 preformed pieces of woven carbonfibre cloth in a press under immense pressure – said to be equivalent to the weight of 100 double decker buses, so about 1800 tonnes – while infusing the cloth with resin.