In six months and 12,500 miles, the Levorg never left us up the creek without a paddle. Quite the opposite, in fact
Share
Open gallery
Close
Share story

When the Subaru Levorg arrived on our fleet, I spotted the fanboy ‘SU13 ARU’ numberplate straight away.

I didn’t think much of it at the time, but it wasn’t long before I noticed that I was getting thumbsup or waves from other Subaru drivers (a welcome change from other gestures I’ve had directed my way).

It happened a lot and I’d like to give a special mention to a fellow Levorg commuter in Stockbridge, who, without fail, gave a friendly wave each morning as he passed me. This unexpected attention might seem a trivial point to make, but it’s an illustration of the interesting proposition that the Levorg is. It has its shortcomings and its frustrations, but you feel part of the Subaru community driving it. Would you get that in a Volkswagen Passat? I’m not saying I’m now in a hurry to join a Subaru owners’ club, but it makes the car feel a bit more special.

There is a lot to like about it. As a wagon, it’s intelligently conceived and well packaged, offering loads of space for passengers and kit, especially for a car that’s slightly smaller than the Legacy. I found it very useful, for instance, to be able to drop the rear seats pretty flat using buttons on the sides of the boot wall. If, like me, you often carry large items in the boot, you’ll find it a decent wagon. It may not be quite as practical as a Skoda Octavia, but it has more character. It’s quirky. It has something different about it.

It also carted my 4.1-metre sea kayak around on the roof with no problems after I fitted some Subaru roof bars to it, and it’s quite low slung, so it was easier to load the kayak on it than it would have been with an SUV. The permanent four-wheel drive was also handy for negotiating seaweed-strewn slipways, although on-demand four-wheel drive would probably offer enough help here when needed and drink a bit less fuel in the long term. You need to weigh up how much your lifestyle dictates the trademark Subaru asymmetric four-wheel drive, or whether a rival with a more efficient system would suit you better. 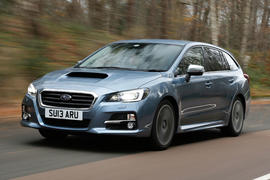 The Levorg is slightly sporty, but for £27,495, it puts out a mere 168bhp and is only reasonably torquey, so it’s not exactly fast. But given that most of these sorts of cars are typically diesel powered, it was nice to have a petrol engine. The flat four motor itself was really smooth right through the rev range, but it’s a shame that you couldn’t hear more of it to bring out more of the Subaru character. The engine was really refined, but there was a lot of road noise to contend with, as well as a bit of wind noise.

Over my six months with the car, it averaged 33.8mpg, which is close to its claimed economy of 39.8mpg, and I’d usually get 400 miles from a tank. However, my commute takes in a large stretch of the M3, with its mind-numbing 50mph sections, which might have helped the average. It’s also worth bearing in mind that the car needs a service every 10,000 miles, so if you do a lot of miles, you might find that comes around inconveniently soon.

I’ve had plenty of experience of running cars with continuously variable transmissions (CVTs), but the Levorg’s was one of the smoothest I’ve used. It depends if it’s in Sport or Normal mode, but if you go to 30% throttle or more it puts in preset gearshifts to make it feel a bit more natural, so it wasn’t irritatingly harsh when the car was driven hard. But it could be caught out with an overly sensitive lurch in response to light inputs at low speeds. I got used to this, but other people struggled.

It’s a shame the Levorg is available with only one trim, one gearbox and one engine. I can see potential buyers wanting a diesel engine, a manual option or a more modern eight-speed gearbox. That would make it more economical and a bit cheaper to run. A lot of the miles I covered were in the New Forest on country roads, and the steering was accurate, with good weighting, but it didn’t offer much feel. The boxer engine is set really low in the chassis to help with the weight distribution, and you could really feel that in the handling. There was next to no roll with it. It had stacks of grip, too, just digging in and firing out of corners. So it was swift across country but never overly involving.

The size was ideal. It never felt massive when driving it and the visibility was brilliant thanks to the thin pillars and low waistline. The large mirrors were great, too. After riding motorbikes, I value something from which I can spot other bikers easily. That the Levorg offered this plus standard blindspot monitors meant I rated it pretty highly in terms of active safety.

The one standout negative is the ride. Our car had the standard 18in wheels, but it felt like there wasn’t enough spring travel. I spent some time as a passenger in the car, too, and I noticed the poor ride even more then. Once you were up to 70mph it settled down a bit, but low speeds were particularly harsh, especially over potholes. For an estate with only 168bhp, it’s a shame that it was so firm.

The driving position was brilliant, though. The electrically adjustable driver’s seat was comfortable and supportive, and there was loads of reach adjustment on the steering wheel. The standard paddle shifters didn’t offer Audi levels of tactility – they were a bit more plasticky – but everything inside felt like it would withstand a decade of hard use.

The infotainment screen looked nice, but the small icons, combined with the bumpy ride, were hard to hit on the move and I found I had to steady my aim by resting my hand on the lip below the screen. Using the sat-nav daily proved that you have to go through quite a lot of stages to confirm what you want on your route. It was a bit long winded and not the most user-friendly compared with BMW’s iDrive set-up.

Nothing felt too cheap, although neither was it overly squishy inside, but it proved to be really durable and practical. And there was a lot of storage and six – yes, six – USB sockets. Frankly, I ran out of gadgets to charge. It’s Subaru’s best interior to date, for my money.

Plus, just look at it. The bonnet scoop is really cool, and it’s a goodlooking thing generally, certainly compared with a VW Golf Estate.

The tailgate was light to close but didn’t open quite high enough for my liking; if I wasn’t standing dead in the middle, all too often I’d bang my head on one of the corners.

The Levorg is an interesting alternative, but it’s quite expensive and Octavia engines are a lot cleaner. It is turbocharged, but it still has permanent all-wheel drive – so it is never going to be the ideal recipe for a mile-muncher. Maybe if we chucked it in a comparison test, it would be shown up against its rivals, but living with it has shown it to be a great companion.

I’ll certainly look back fondly on my time with this quirky estate. The Levorg may not be the best in its class, and it may have its shortcomings, but if you end up owning this SU13 ARU in the future, expect a thumbs-up from me.

Worthy of its maker's badge?

It's the little things

17 February 2017
I'm pretty sure Subaru's famed 4WD system is Symmetrical and always advertised as such.

17 February 2017
Subaru have a habit of doing everything "nearly right" which is a pity. But this is a possible contender later this year for me because living in Russia where petrol costs than diesel and I pay about 50p a litre for 95 octane the consumption wont bother me so much although a Tesla suv would be perfect because electricity is even cheaper and as I have a garage only 500m from the apt I get electric included in the rental price. Problem there is purchase price which out of my league. The other issue with Scoobie is they lose value way too fast. Maybe wait a buy a nearly new would be the answer, but 4wd essential for us. Octavia Scout is the only other alternative but have friends who peed off with reliability and service costs

17 February 2017
Not quite sure why'd you'd compare a car probably bought because it has 4 wheel drive against a 2 wheel drive Octavia. You wouldn't drive the 2 across a field and say the Octavia was no good because it got stuck would you

17 February 2017
Very likeable car. Subaru still value engineering over 'perceived quality' and I admire that perverse refusal to bend to the market. I bet this would get a lot further across rough terrain than many so-called SUVs. And the point about the lower roof is valid - if you use a roof rack for bikes, boats or a luggage box, an estate car is much better for an 'active lifestyle '.

Its always the case with cars

17 February 2017
Its always the case with cars like this, that they pick the spec for you, and you either love it or you dont. For me, i cant see why it didnt have the 2.0 litre engine. Why you couldnt have a manual, and my pet hate, lets have the option of normal glass. We havent all got ugly kids.

17 February 2017
I agree about privacy glass - it looks stupid, like youve turned your car into a van.

17 February 2017
A lower trim level without the big alloys, leather, or auto box and a good few £k off the price could significantly increase sales so why don't Subaru do one? Plus they should drop this 1.6 turbo into the Impreza and XV.

17 February 2017
It sure does, say 16" or 17" alloys, part electric seats. But that's unlikely to happen. The engine going into the 2017 model Impreza and XV is a possibility. The reason mainly is the collapsing value of the Pound compared to other main currencies, I'm presuming that includes the Japanese yen? I'd like a slightly dekitted Levorg or the 1.6 turbo XV for when my lease expires on my current car in 2018.