The Volvo XC40 crossover concept has been unveiled at a special event in Gothenburg. The production version, due next year, will be the first car to use the brand’s new Compact Modular Architecture (CMA).

The concept, which is called 40.1, is a thinly disguised look at what the XC40 will look like when it goes into production. It was revealed alongside the brand’s V40 electric concept, called 40.2.

Both the XC40 and V40 will be built from Volvo’s new CMA, which underpins both the company’s smaller products and those of its Chinese parent company, Geely.

The 40.1 features a hybrid powertrain with a three-cylinder petrol turbo engine working with an electric motor.

The 40.1 reveals that – despite carrying the same engine branding as the XC90 T8 – the XC40 will be front-wheel drive. The concept’s powertrain is described as T5 Twin Engine and uses a 1.5-litre three-cylinder petrol engine, closely related to the existing 2.0-litre four, and drives the front wheels in conjunction with an electric motor and through a seven-speed dual-clutch automatic gearbox.

The petrol engine produces 180bhp and the electric motor adds 74bhp, with power coming from a compact 9.7kWh battery pack mounted in the centre of the car. That’s a total combined output of 250bhp for the petrol-electric powertrain and we’re told that it will have 30 miles of pure electric range. Fuel economy and CO2 numbers haven’t been released yet, but powertrain boss Michael Fleiss promises that it will be class-leading. “If it’s not then we’ve done something wrong,” he said.

The gearbox is particularly clever, with the electric motor acting on one of the dual-clutch shafts (the one that handles second, fourth, sixth and reverse). This gives it the potential to add boost through one of the shafts while the internal combustion engine drives the other.

Styling carries through much of the form language of Volvo’s larger products, with front-end design similar to the XC90 and an angular athleticism to the 40.1’s side-on profile. There’s also a passing resemblance to a Citroën C4 Cactus with its cladding removed.

R&D boss Peter Mertens said the hybrid powertrain is designed to improve environmental numbers and that the T5 will have class-leading CO2 figures. The electric motor is able to engage and disengage through a separate clutch that connects it to the transmission’s input shaft, boosting efficiency further.

Talking about CMA, Mertens said it should be viewed as the smaller brother to the larger SPA platform that underpins Volvo’s 90-series family, and that it will offer a similar degree of what he calls “plug and play” flexibility.

“The architecture is as modular as SPA,” he said. ”We have a very successful blueprint for how to do it and that has been flowed into CMA. You could almost say it’s the little brother of SPA when it comes to flexibility and modularity.”

That means that CMA will allow for both front and all-wheel-drive variants, with Mertens admitting that it will allow Geely to use cheaper components while still allowing Volvo to make versions that will be able to compete in the premium segment. He said it could even offer a version with an electrically powered rear axle, similar to that of the Volvo XC90 T8 Twin Engine, although that would come later. 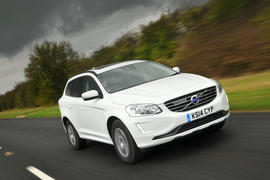 Like most concept cars this one tries too hard and lacks the relaxed confidence of a great design. When Autocar released some teaser images a few days ago it was all very promising, but I'm afraid the sum is definitely less than its parts.
AV 18 May 2016

This looks like a Toyota CHR - even down to the silver and black paint job, which is precisely how the Toyota was revealed. The hybrid powertrain also, obviously, follows Toyota's lead.
The Apprentice 18 May 2016

Better than an Evoque, at

Better than an Evoque, at least no one sat on the roof.
View all comments (11)