BACK TO ALL NEWS
Currently reading: Volvo primed to replace V40 with SUV-coupe
UP NEXT
New Mercedes-Benz EQA revealed as sub-£40k electric crossover

The Volvo V40 could be indirectly replaced by an SUV-coupé in the next three years, in reaction to falling sales and the need to accommodate electrification.

Lex Kerssemakers, Volvo's European boss, confirmed to Autocar that the V40 will not be replaced directly but said that it would be superseded by a higher-riding model.

He is confident that Volvo can achieve its annual sales goal of 800,000 units with its existing three-pronged approach of the 40, 60 and 90-series cars, but added: “We probably need another bodystyle in the next two to three years in the 40 series.

“We need to do something more creative, which is why we decided not to replace the V40 [directly].”

While Kerssemakers didn't describe the incoming car as an SUV-coupé, he did confirm that it will be higher-riding than the V40, allowing for easy, high ingress and egress.

A higher car will also more easily allow for electrification, a version of which all of Volvo’s new cars will offer. “We can’t launch a car that isn't equipped to be fully electrified,” Kerssemakers said.

The V40 is the only remaining Volvo model that is not based on Volvo’s CMA or SPA platforms, which accommodate petrol, diesel, hybrid and electric powertrains. It uses Ford’s Global C platform, which dates back to 2003 and doesn't allow for electrification.

Kerssemakers confirmed that design of the new car is currently under way and said he hoped it would be ready in the next two years, using some of the same panels as other Volvo models.

Referencing that production of the V40 will stop this year, he said: “We can’t wait too long to introduce the new car. We don’t want to lose our space in the segment. We are still confident that we can cover certain parts of the market, although not the die-hard hatchback fans.”

To that end, the new model is likely to sit slightly lower than the XC40 SUV and have a sleeker roofline, helping to appeal to existing hatchback owners while ensuring enough differentiation from the XC40.

It's possible that the design might be in a similar vein to the forthcoming Polestar 2 electric car, which is expected to be a production version of the Concept 40.2, a concept that Volvo showed in 2016.

Kerssemakers noted that Volvo has seen many customers move from a V40 to an XC40, echoing the ongoing SUV trend of the last few years.

Despite the popularity of SUVs, he added, referring to the 60 and 90-series saloons and estates: “We will continue to offer low cars. We believe there will be a market.”

Polestar 2 previewed in first official image ahead of imminent reveal 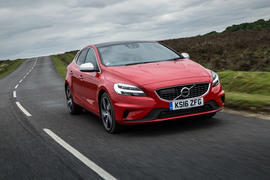 Killing the V40 allows the XC40 to expand production

They are both built in Belgium once the V40 is gone they can covert the production line and attempt to clear up the backlog of XC 40 orders.

When, a few years ago, SUV's

When, a few years ago, SUV's were aimed at the outdoorsy, lets-go-skiing/ MTB/ play polo sets, then they are aspirational vehicles.Now they are aimed at those that need 'easy high ingress', the appeal of driving a blinged-up pensioner chariot loses its appeal.

Hopefully BMW 3 series, A6 Avants etc  are going to make a comeback, because they do not allow 'easy ingress', indicating that those onboard have more than 5 months left to live.

indicating that those onboard have more than 5 months left to live.

LOL... You know you'll be old too someday, right?