BACK TO ALL NEWS
Currently reading: Volkswagen to launch entry-level ID electric car after 2025
UP NEXT
High-rise hot hatches: Hyundai Kona N vs Cupra Formentor

Volkswagen CEO Ralf Brandstätter says the firm is fully committed to producing a small electric ‘people’s car’, with a target starting price of around £17,000, as part of its fast-growing ID range.

The German firm is currently rolling out a number of electric-only models on the Volkswagen Group’s MEB platform, starting with the ID 3 hatch and ID 4 crossover will go on sale early next year. In a new roadmap detailed today, Brandstätter revealed that Volkswagen will launch "at least" one new EV per year, starting with the China-only ID 6 in 2022, the ID 5 coupé-crossover in 2023 and the ID Buzz MPV in 2024.

The 'Aero-B', an electric estate based on the ID Vizzion saloon concept, will arrive in 2025, followed by the long-mooted entry car, believed to be badged ID 1.

Volkswagen continues to invest heavily in developing its electric technology and Brandstätter has previously said developing a new MEB-Lite version of the platform, designed for cars featuring smaller batteries with a capacity of up to 45kWh, remains a priority. 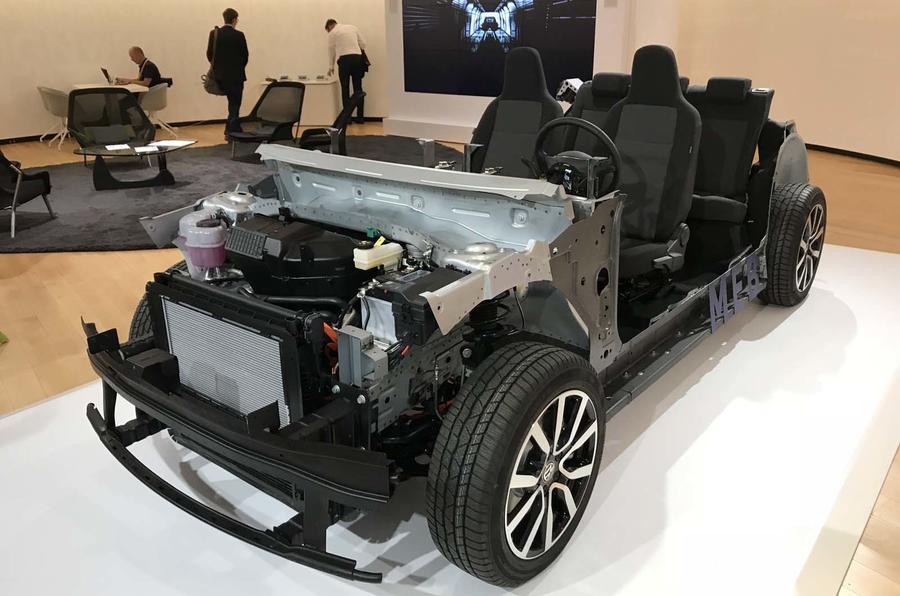 Volkswagen will first use the platform for a supermini and compact hatchback, likely carrying the ID 1 and ID 2 tags and intended to sit alongside the combustion-engined Polo and T-Cross respectively. The firm is aiming to sell the cars for between £17,300 and £22,200 pre-subsidy.

The two new models will effectively replace the Volkswagen e-Up as the entry point into the VW electric range, with the smaller batteries reflecting their focus on lower-mileage urban usage.

Volkswagen will also work with its various Chinese joint-venture partners to offer “highly affordable” electric cars in that market and the MEB-Lite platform will also spawn a range of entry-level models from sibling brands Seat, Skoda and Cupra. It is not yet clear whether the production version of Audi's AI:ME urban EV would use the smaller platform or the full-sized MEB architecture for a longer range.

An entry-level affordable ID model has long been a major goal for Volkswagen and is considered key to helping boost uptake of electic vehicles to hit its long-term sales goals and emission targets. Speaking recently, Brandstätter said: “We're working on these concepts. Of course, we have to take into account that lower segments will in the future be demanding EVs, and we're preparing concepts.”

On the subject of a replacement for the popular but unprofitable e-Up, Skoda Citigo-e iV and Seat Mii Electric, Brandstätter said: “We're working on concepts for smaller segments. We will discuss it soon. Cars in smaller segments are important and very interesting for us.”

Seat will next year begin production of its new Minimó electric quadricycle. It’s not yet confirmed whether that will be sold under a different name by other Volkswagen Group brands, but Volkswagen is considering urban-focused mobility solutions.

“At the moment, we're focusing on electric vehicles,” said Brandstätter. “Of course, we have studied these last-mile proposals, and we have some concepts ready, but at the moment, there's no decision taken going to the market.”

Volkswagen is keen to emphasise the flexibility of its MEB platform, which underpins the ID 3 and ID 4 and will go on to provide the basis of the ID 5 coupé-SUV, ID 6 saloon, ID Buzz van and an as-yet-unnamed model from new development partner Ford.

A small electric sports car, as reported by Autocar last year, remains on the cards. Brandstätter refused to give details but said: “MEB is a very versatile platform. Year by year, we will inform you which kind of cars are possible.”

Volkswagen's ID R electric performance car range is set to be topped by a Tesla Roadster-rivalling coupé/roadster arriving in 2025.

I remember when £17k bought you a well-specced middle-of-the-road Golf, now it'll buy you a poverty-spec EV equivalent of the Polo. And it's not just EVs, all cars have become incredibly expensive recently. Golf Rs could be had for £30k new, now they're knocking on £40k for the Mk 8.

Considering the base ID3 has plastic wheel trims over steel wheels & rear brake drums it should be a lot cheaper!!