Volkswagen has claimed the Nürburgring lap record for front-wheel-drive cars with its 306bhp Golf GTI Clubsport S ahead of the car’s unveiling at the Wörthersee VW enthusiast event this week.

Read our review of the Golf GTI Clubsport S

The Clubsport S is VW's hottest Golf GTI yet, is more powerful than even the four-wheel-drive Golf R and is VW’s most track-focused Golf GTI yet, recorded a 7min 49.21sec lap around the Nürburgring Nordschleife. Prior to the Clubsport S's official unveiling, Autocar was granted exclusive access to the car and its engineers during final testing at the German circuit.

As can be seen in these images, a few key identifiers mark the Clubsport S out from regular Golf GTIs and the standard Clubsport model. Although the aero package is unchanged from that of the Clubsport, the S features a larger twin exhaust and the 19in wheels required for its standard Michelin Pilot Sport Cup 2 tyres.

EXCLUSIVE: We ride around the Nürburgring in the VW Golf GTI Clubsport S

To achieve the Nürburgring lap time, which is 1.4sec faster than that of the previous record holder, the preproduction Honda Civic Type R, the Clubsport S has been extensively modified compared with the standard Clubsport.

Thanks mostly to the removal of the rear seats and much of the sound deadening material, weight has been reduced by 30kg. The six-speed manual gearbox is unchanged from that of the standard GTI, with VW saying the time gained in shift times by using a DSG dual-clutch automatic would be lost by the 20kg weight penalty. The retention of a manual gearbox will also appeal to the purists VW will want as customers for the limited run of 400 Clubsport Ss.

Air conditioning is likely to be a no-cost option, and the smaller infotainment screen fitted to this car is expected to be the only available system. 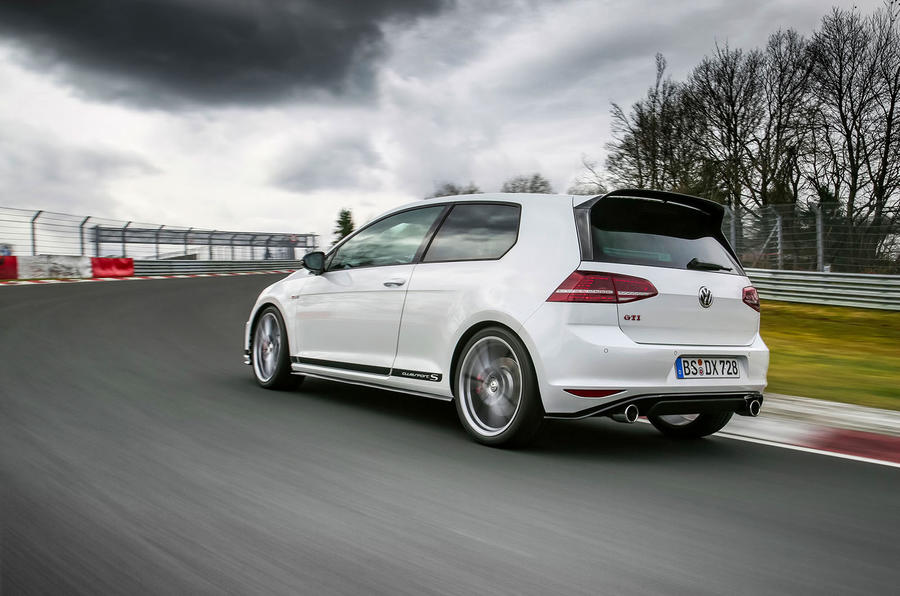 A comprehensive rework of the suspension includes adaptive dampers that have been calibrated to include what engineers have dubbed a ‘Nürburgring setting’ as part of the Individual mode. This keeps the dampers fairly supple to deal with the kind of awkward surfaces and undulations that characterise the German circuit, but with enough control to ensure a fast time.

There are also revisions to both axles, along with tweaks to the camber and the castor, intended to give the Clubsport S even more tenacious turn-in and boost driver confidence. The model also gets an aluminium front sub-frame and aluminium carriers for the brakes, the latter benefiting unsprung weight that is key for composure on the Nürburgring.

The VAQ system that mimics a limited-slip differential is standard and unchanged from its fitment in the Clubsport, the Performance Pack Golf GTI and other hot hatches in the Volkswagen Group, but with its extra power and overhauled suspension, the Clubsport S is a long way beyond the ability of those cars. For reference, a Golf GTI Performance Pack will lap the Nürburgring in 8min 26sec, nearly 37 seconds slower than the Clubsport S.

The S’s brake calipers are also lifted from the regular Clubsport, although thicker front discs and upgraded pad material have been used in order to withstand repeated hard use. Unlike the rival Renault Mégane RS 275 Trophy-R, the Clubsport S won’t be sold with a roll cage or harnesses

Power has been increased significantly over that of the regular Golf GTI Clubsport. While that car makes 261bhp, along with a transient 286bhp on overboost, the Clubsport S produces 306bhp, thanks to a new exhaust and revised mapping of the EA888 turbocharged 2.0-litre petrol engine. Exact performance figures have not yet been released, but expect the Clubsport S to hit 60mph from a standstill in six seconds or less and be limited to a top speed of 155mph, although the lap record car topped 157mph. 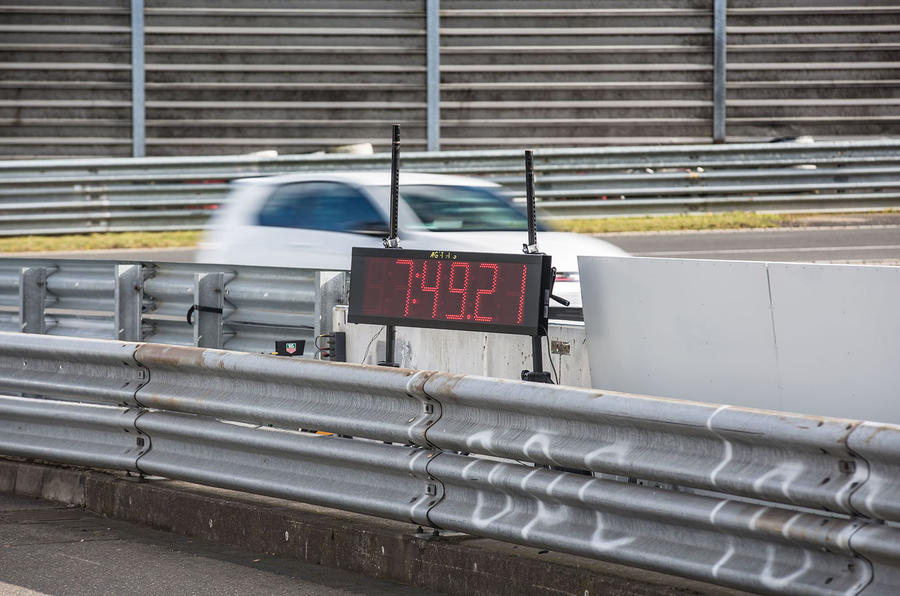 The Clubsport S’s peak power figure makes it the most powerful production Golf yet and equal to the Honda Civic Type R.

Stefan Gies, Volkswagen’s head of chassis development, revealed that he is aware of an increasing demand from customers for track-focused hot hatchbacks and was conscious of VW’s absence from the market.“I want to be able to give customers who want to go on track a Volkswagen, and not an OPC [Opel] car or Mégane [Renault Sport] or anything else,” he said. “This [the Nürburgring] is kind of my home track, and when I look at the tourist days, I see a lot of competitors’ cars. We would like to see more of our cars.”

At present there’s no word on availability or pricing for the Golf GTI Clubsport S, although Volkswagen expects the UK to be its biggest market.

Given its level of performance, the Clubsport S will face rivals such as the Ford Focus RS and Mercedes-AMG A 45, and with a £3380 gap between a standard three-door Volkswagen Golf GTI and the equivalent Clubsport, it is likely that a similar — or possibly greater — premium will separate the regular Clubsport and the S.

As a limited-edition model, it will most likely have a price beyond £35,000, and it should reach UK customers towards the end of this year.

Just for the record

With the Clubsport S existing as a means for VW to reward customers who have embraced the Golf GTI for so long and with the model in its 40th year, it was decided that the time was right to deliver a more hardcore GTI for those who want to take their car on track. But speaking with the engineers tasked with creating such a car gives the impression that they have wanted to do something in this vein for a while.In the fairly nondescript industrial unit out of which Volkswagen is basing its Nürburgring operations, the mood is surprisingly relaxed for a team chasing a lap record. The Golf GTI Clubsport S project has been running for just over a year, with Stefan Gies confirming that the process involved adding power to a standard GTI and then developing the systems as they found room for improvement. Talking us around the car, he confidently suggests that “not a lot” has changed to make the Clubsport S quite so fast. 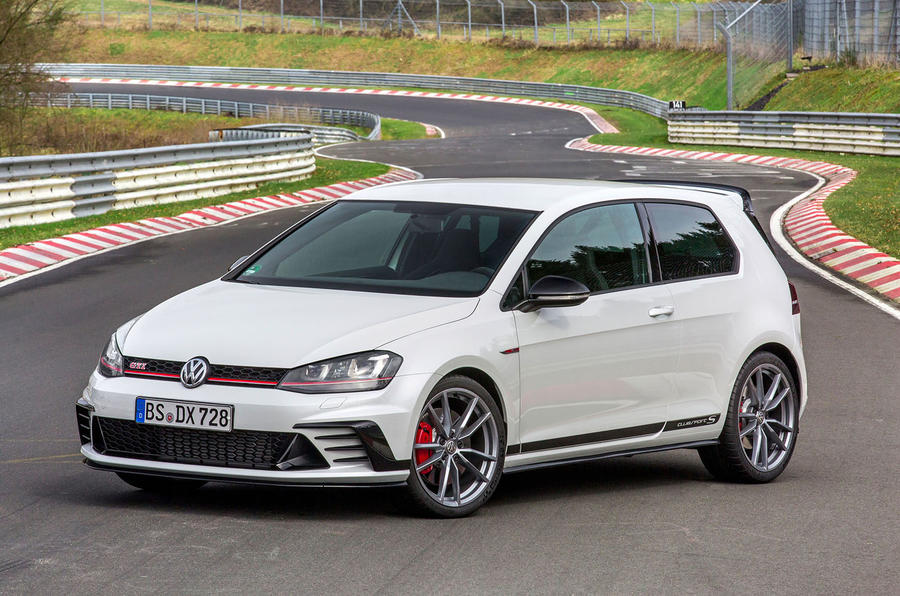 Arguably the man most responsible for the Golf’s transformation is Karsten Schebsdat, VW’s head of car chassis tuning. As a man with previous form as head of performance for Porsche’s GT cars, he knows a thing or two about making cars go quickly around a circuit, not least the Porsche 911 GT3 RS 4.0. Schebsdat describes making the lap record attempt as a “very important” job. “It’s not easy,” he says, “but it is a very nice task.”

Suspension development was key, with the Nürburgring’s undulating surface offering a real test of wheel and body control. Ensuring that the wheels are kept in contact with the ground is vital; it’s no use for a car to have a huge amount of power if it’s continually being deflected by an ill-mannered suspension set-up. Similarly, a car that’s superb on a smooth track would be of no use on a bumpy road, so the Clubsport S’s heavily revised adaptive dampers, with their ‘Nürburgring setting’ in the Individual mode, ensure, says Karsten, that a lot of mechanical grip remains even over the circuit’s bumps.

This car isn’t intended just for circuit professionals, though. Gies and Schebsdat are keen to emphasise that the high levels of grip and a balance that nudges towards understeer mean that non-expert drivers can get the most from it. Gies suggests that the Clubsport S is “an everyday car with some compromises” and a rather different approach to the Mégane Trophy-R, with its passive dampers and standard roll cage. The aim was to retain as much of the usability of a standard Golf GTI as possible while incorporating the performance and ability of the very fastest current hot hatches. And if you push them, there’s a bit of national pride at bringing the Nürburgring lap record back to Germany.

The Clubsport S may seem like an odd move for VW, given Seat’s efforts at the ’Ring (the Leon Cupra being a previous lap record holder), but that shouldn’t detract from how exciting the Clubsport S is. We’ve only ridden in it for now, but even that was considerably more vivid and exhilarating than any other fast Golf you care to mention.

Nice to see a couple of posters (easy to identify) completely missing the point of the majority of poster here. "Haters gonna hate". Really? Is that the level we are aiming at?

"Are you a major motor manufacturer? Lots of bad publicity recently (bad emissions, bad reliability)? Need a shot in the arm for your PCP plans? Do you have a pet UK publication? Why not take all the stuff out of a car that makes it actually useful day-to day and set a fast and completely irrelevant time at the Nurburgring! It'll win you massive points in the Top Trumps set at the bar!"

No surprise to see the "The War Never Ended" society gobbing off. Bunch of buffoons. If manufacturers were actually as bothered as some posts suggest about a record they set being broken, there'd be somebody out there setting a new one every couple of hours. And if it were rear drive - well, it wouldn't be setting a front-wheel drive record would it?
SJK 5 May 2016

Smashes record with 0.3% (rounded up)improvement. Have Autocar journalists lost all touch with reality? It's just some fun for the VW engineers. Having thrown everything else out, why not the driver too. An autonomous drive would be just as relevant as this (actually in development terms far more relevant), and even more fun for the VW engineers - you could throw out the drivers seat too, even faster!. It's all very very silly.
View all comments (19)