BACK TO ALL NEWS
Currently reading: Skoda previews new Fabia ahead of Paris debut
UP NEXT
New 2021 BMW M5 CS sets records for pace and power

Skoda has given the best preview yet of how its new Fabia will look, releasing images of the production car's front-end styling ahead of its planned Paris motor show debut.

Order books for the new Fabia are likely to open following its October launch. From these images we can see the new Fabia keeps Skoda's corporate front-end treatment, while new elements like chrome edging around the grille show the car's move upmarket.

Such a move is neccessary if Skoda wishes to challenge hatchback class leaders like Volkswagen's Polo or the Ford Fiesta.

Launching with a range of four petrol and three diesel engines, all the Fabia's powertrain options will meet strict EU6 emissions standards.

Diesel options comprise three tuned versions of the same turbocharged direct-injection three-cylinder 1.4-litre unit, with power ranging from 74bhp to 103bhp. Both manual and DSG transmission options will be available.

Following the car's launch, Skoda will also introduce a new Greenline version, based on the 74bhp 1.4-litre diesel, with headline-grabbing figures of 91.1mpg alongside CO2 emissions of 82g/km. Across the range, Skoda says the new Fabia uses 17 per cent less fuel than today's car.

Given the obvious weight-saving potential of the smaller engine and lighter five-speed manual gearbox, the cheapest Fabia - the 1.0-litre MPI - is also the lightest, with a dry weight of just 980kg.

The firm also recently revealed the first design sketches of the all-new Fabia, revealing the new car would borrow heavily from the styling accents already seen on the new Octavia.

The third-generation car will benefit from the sharply styled panels, shorter overhangs and better shoulder line definition that has become a hallmark of the VW Group’s current output.

Still just under four metres in length, the supermini retains its sub-compact credentials but has swollen 90mm in width to apparently incorporate new axles front and back. Along with the wider wheels already snapped by our spy photographers, this ought to lend the car a broader stance and enhanced on-road presence.

Although few genuine risks have been taken with the model’s crisp new appearance, a 30mm drop in height should mean the Fabia exudes at least a smidgen more athleticism than the upright model it replaces.

Modest reductions made to the kerb weight ought to help Skoda extract the best from the chassis, which is understood to use the same MacPherson strut front and torsion beam rear suspension as its predecessor - albeit in realigned format to take account of the lower centre of gravity.

Torque vectoring, delivered via the XDS+ stability system, will potentially be a standard feature of every model – as will electric power steering.

Trim levels are thought to closely resemble the manufacturer’s current line-up, although naturally the latest tech available from VW Group’s latest modular template will be added.

Expect to see larger touchscreens made available in more expensive models, alongside the Mirror Link system that is capable of presenting a clone of your smartphone's display.

Any new kit will be absorbed into an optimised interior. Skoda is certain to have exploited the Fabia’s newfound girth to best packaging effect with luggage capacity now understood to top the class at 330 litres. 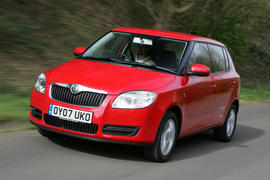 A revamped dashboard will obviously feature, although it won’t stray too far from the sensibly arranged and utterly logical layout that has become a hallmark of the Czech manufacturer.

As previously forecast, Skoda will ditch the vRS following disappointing sales of its forbear, and a four-wheel-drive Fabia has already been ruled out.

However, Skoda will go someway to patching up the hole in its range with the introduction of a Monte Carlo edition - a ritzier trim variant already established elsewhere in the manufacturer’s range.

Expect to see a more aggressive use of two-tone colour schemes, along with the application of the bigger sills and rear spoiler that would previously have been the preserve of the range-topping vRS.

Unlike that model, the Monte Carlo is likely to be made available with the choice of any engine or gearbox - although it will offer buyers the chance to spec their car with a 15mm lower ride height if they want to further enhance the more aggressive appearance.

I agree a diesel like the new 1.6 in the Renault/Nissan range with 130bhp would be cracking in this if they did a repeat of the first VRS.

Just wish they put that engine in the new Clio then id be tempted for my next commuter car.

There will need to be doors for a start as well as wheels where the hubs are in the centre. This is a classic example of what you get when a staid organisation tries to kid you it's going all cool; utterly uncool in fact.

Pity it Is getting fatter, hopefully it will lose the awkward shape as a consequence but in view of the VW conglomerate's seeming fear of stylistic innovation don't hope for too much.

Scotty5 refers to the diesel engines "sounding a little rough". To me they can be gutty rough with the exception of the 2litre which is a good unit. Not likely to be in the Fabia though.