BACK TO ALL NEWS
Currently reading: Rolls-Royce launches 593bhp Dawn Black Badge special edition
UP NEXT
Driving the legends of the secret Mercedes archive

Rolls-Royce has expanded its line of customisable models with a new and more powerful Dawn Black Badge convertible, which is on show at the Goodwood Festival of Speed.

The special edition of the Dawn follows Black Badge’ versions of the Ghost and Wraith, that were unveiled at the 2016 Geneva motor show. The models are designed to appeal to younger luxury car buyers. The extra power means the Dawn Black Badge is capable of going from 0-62mph in 4.9sec, with an electronically limited top speed of 155mph.

The car also gets a new exhaust system, which features a Low button to produce a “menacing bass baritone”, while the gearbox and accelerator have been reworked to give the Dawn quicker downshifts and more urgency. The suspension has also been reworked to give flatter cornering at high speeds, while the steering rack has been quickened to offer more feedback. The Rolls-Royce Spirit of Ecstasy has been finished in high-gloss black chrome, a treatment also applied to features including the car's front grille surrounds, boot lid finisher and exhaust pipes. 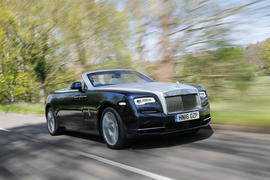 Rolls makes grand claims for its new four-seat soft-top - does it deliver the refinement and luxury expected of the brand once exposed to the elements? The interior surfaces are covered in ultra-thin threads of aircraft-grade aluminium, which are woven together and bonded in carbonfibre, finished with six coats of lacquer and then hand-polished. The seats are finished in black leather with mandarin highlights. It's not a special edition.

It's not a special edition. It's a model which sits alongside the 'standard' car.
rmcondo 28 June 2017

Aren't all RRs supposed to be

This obsession over ur-bespoke and limited edition models from certain premium and luxury editions provides an easy source of filler for websites like this but it's not news and I'd be amazed if many readers spent more than 10 seconds glancing at the results.
beechie 28 June 2017

I spent an hour dribbling over my tablet...