BACK TO ALL NEWS
Currently reading: Road test rewind: Rolls-Royce Phantom
UP NEXT
Drawing fire: We talk to BMW's design director

In 2018, the second Phantom of Rolls’ modern era showed itself to be a world-beater
Share
Open gallery
Close
Share story

The concepts of largesse and largeness, as easy as those words may be to confuse on a Scrabble board, can rarely be applied to a new car as faithfully as to Rolls-Royce’s biggest showroom model: the inimitable Phantom.

Goodwood’s self-proclaimed ‘best car in the world’ was, in its previous generation, the car with which its maker revealed in 2003 the full size and scope of its ambition under BMW Group ownership. And it was a limousine unlike any other the world had seen. Now, in second-generation modern form (although this is the eighth generation of the Phantom in Rolls-Royce Motor Cars’ history, they haven’t always run concurrently), the Phantom has an all-new platform that, it’s claimed, makes Rolls-Royce unique as a super-luxury car maker.

That platform is an all-new all-aluminium spaceframe dubbed (perhaps with unnecessary pomp) the ‘Architecture of Luxury’ and it makes the car’s body-in-white both 30% stiffer than the previous Phantom’s was and slightly lighter. However, Rolls-Royce admits that the fully dressed and trimmed Phantom is heavier than the car it replaces – and unavoidably so, because adding running chassis technology, refinement measures and on-board luxury features, as Rolls-Royce has, can’t be done without weight coming along as well.

The car’s 60deg aluminium V12 engine is also all new, displacing precisely the same 6749cc as the old Phantom’s atmospheric V12 but using twin turbochargers to supply 563bhp and 664lb ft of torque from just 1700rpm.

On the move, the genius is not that the Phantom’s suspension can perfectly prevent you from feeling the lumps and bumps you’re travelling over at all, because nothing on four wheels could. It’s more that the supremely supple, ever undetectably adjusting, long-wave gait of the car so perfectly embodies your expectation of how the most luxurious car in the world will feel. From the driver’s seat, meanwhile, the Phantom is so much more engaging and enjoyable to drive than any car with this brief has any right to be. There is real power and urgent acceleration available, too, of course; a progressive swell of pace building gradually but deliberately in proportion to the position of your right foot. 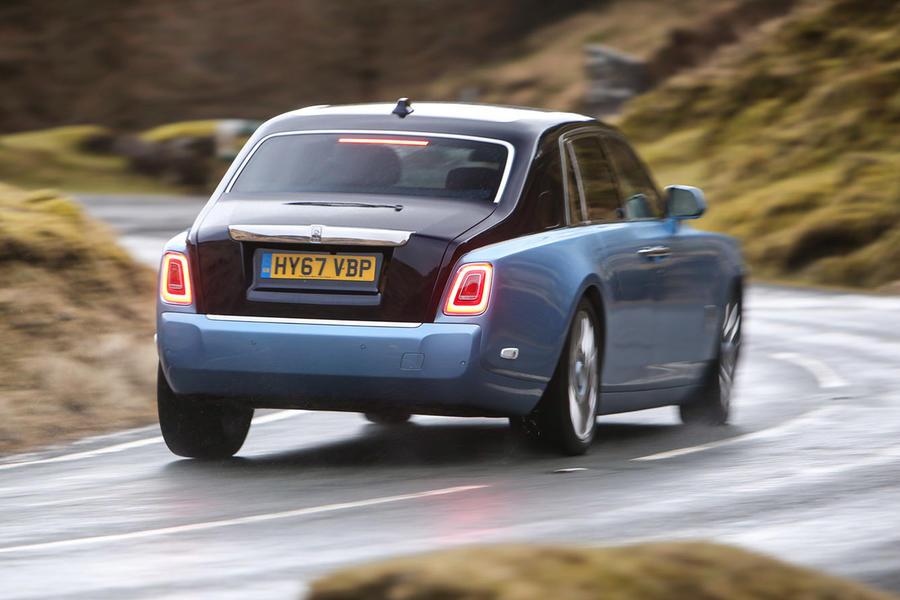 Sequels are rarely better than the books, films or shows they succeed. And yet the functional superiority of the new Phantom over its super-luxury peers may be even greater than the margin by which its predecessor led its field. It has grandness and sense of occasion in advance of anything else on four wheels.

There's nothing quite like a Phantom VIII - Richard Lane

You may not recognise it from these pictures, but we photographed the Phantom road test in the Brecon Beacons. (It was joined on the day by the new Ferrari 812 Superfast, the pair together creating the ultimate fantasy two-car garage.)

It fell on me to chaperone this beastly machine from our base in Feltham to the Welsh mountains and the journey was nothing short of revelatory. You often hear about how powerful GT cars can cruise at speeds that genuinely deceive your senses, but the manner in which the Phantom will make 80mph seem like 30mph is genuinely bewildering. A Mercedes S-Class comes fairly close to matching the Rolls in this way but ultimately lacks the size, mass and feeling of complete and utter imperturbability as it moves along wide, open expanses of motorway.

Noise isolation is also spectacular and, in the world of the Phantom, every bit as special to the overall experience as the scream of the V12 is to driver of an 812 Superfast. The loudest noise is not from the engine or the tyres or the air crashing into the ‘Pantheon’ grille, but the wind-whirr generated by other cars in your vicinity. Progress is almost ethereal.

Rolls-Royce to be first car firm to resume UK production

A lot of Fu Manchu around the front end.