BACK TO ALL NEWS
Currently reading: Renault considering future of Scenic
UP NEXT
New 2021 BMW M5 CS sets records for pace and power

The future of the Renault Scenic and Grand Scenic is under consideration, according to Renault boss Thierry Bollore.

That’s due to a changing market in which SUVs reign supreme and MPVs such as the Scenic and Grand Scenic have fallen heavily out of favour.

Bollore said: “For the next generation, there is a question: do we just have SUVs, or do we continue to have MPVs? This questioning is ongoing."

However, he added that it was “interesting to have an offer that wasn’t just an SUV” in the model range.

Referring to the current Scenic, Bollore said: "Today, we are happy with what we are doing with Scenic but the segment is changing from year to year. For now, we are still fulfilling our customers' needs."

Renualt Europe boss Jean-Christophe Kugler, commenting on the ongoing success of the model, said: "Scenic customer loyalty levels are very high. We worked a lot with design, because [one of the reasons customers rejected] MPVs was often around design. Renault created the MPV market and so I think it helps having that leadership.”

In Europe, Scenic and Grand Scenic sales peaked in 2004 at 319,131 units. Now sales are around the 105,000 market but have been broadly consistent for the past few years. Sales will increase this year, added Bollore.

The Scenic and Grand Scenic were once important cars for family buyers, but as the SUV trend has surged worldwide, MPV sales have fallen dramatically. Renault now offers three SUVs in Europe: the Captur, Kadjar and Koleos. Together they account for almost one third of the company's sales. 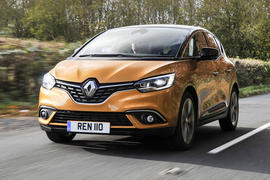 The striking new Scenic's ride, style and effortless drive all offer serious appeal, but choosing the right engine is paramount

Shame if they do. I've got

Shame if they do. I've got the last gen scenic (an xmod version) and it's a very practical car. Doesn't look great, granted, but it's a company car, so I don't really care. I do really like the look of the new one, much better than the Kadjar in my opinion.